Perhaps the most surprising result of the quarterfinals was Spain’s victory over a strong Azerbaijani squad. After signing four draws in the first set, wins by David Anton and Miguel Santos in the second mini-match gave Spain overall victory, despite Alexei Shirov’s loss against Gadir Guseinov on board 3 — importantly, Jaime Santos held a draw with black against Shakhriyar Mamedyarov on the top board.

Facing Rauf Mamedov with white, Miguel Santos had a better pawn structure and a slightly safer king in and endgame with queens, rooks and five pawns per side.

Black’s position is falling apart. After 45.Rxa6 Qb2 46.Qe3 Qxb4 47.Rxc6, White had created the queenside passed pawn that would end up giving him a crucial victory in the second set of the match.

The 23-year-old from Sevilla needed nine more moves to convert his advantage into a win. 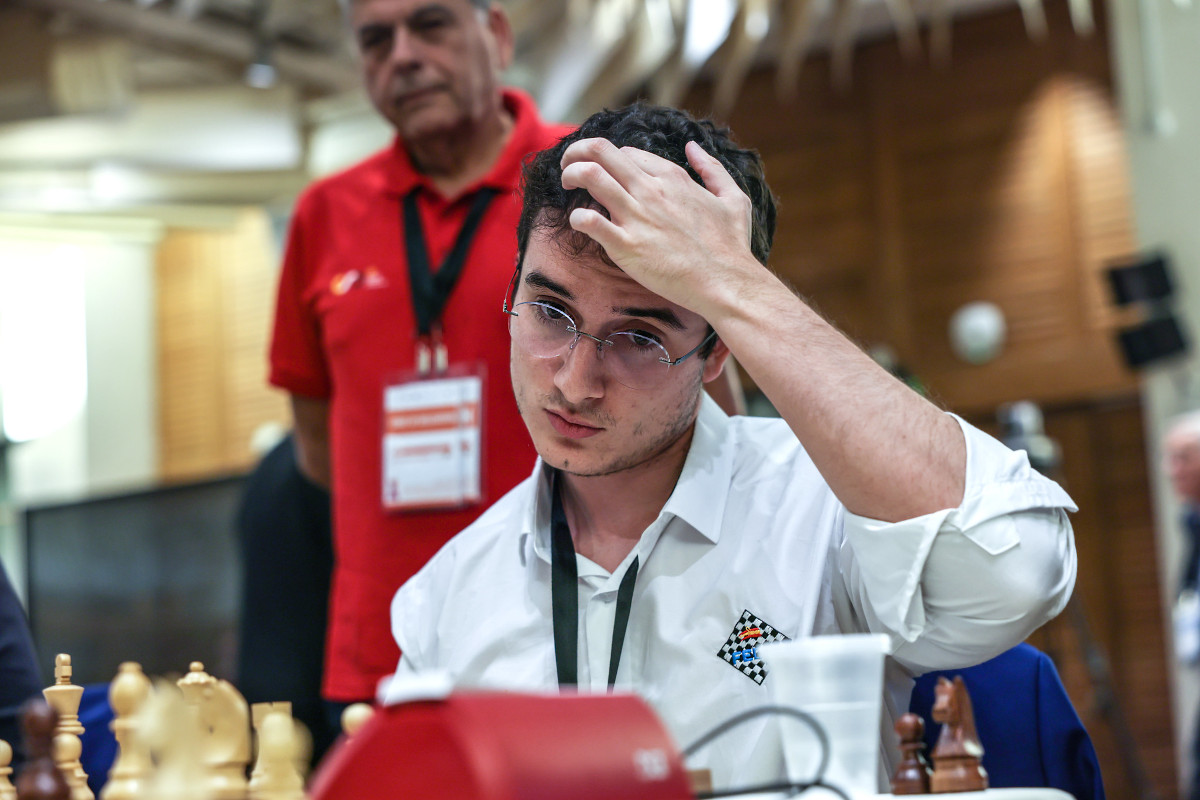 Both in the preliminaries and in the quarterfinals, a gritty Indian team showcased great fighting spirit to now be among the four squads that still have chances to win the tournament in Israel.

Facing a French team led by the ever-dangerous Maxime Vachier-Lagrave, the Indians got ahead on the scoreboard by comfortably winning the first set of the match. The Frenchmen bounced back, though, with MVL and Laurent Fressinet scoring with black to take the contest to tiebreaks.

In the blitz, France made a substitution, as Maxime Lagarde, a quick-play specialist, joined to play on board 4 instead of Tigran Gharamian. The strategy worked out for the Europeans insofar Lagarde defeated Sasikiran, but wins for Nihal Sarin and Narayanan meant the Indians had gained a spot in the semifinals.

Narayanan’s bishop was the stronger minor piece in his first-set game against Fressinet.

When there is action on both sides of the board, bishops are often stronger than knights. Here Black’s bishop defends the passer on a2 from the distant f7 square, allowing 47…Rb1 48.b7 Rxb7, which prompted Fressinet’s resignation. The centralized white knight looks strong, but is too slow in this setup. 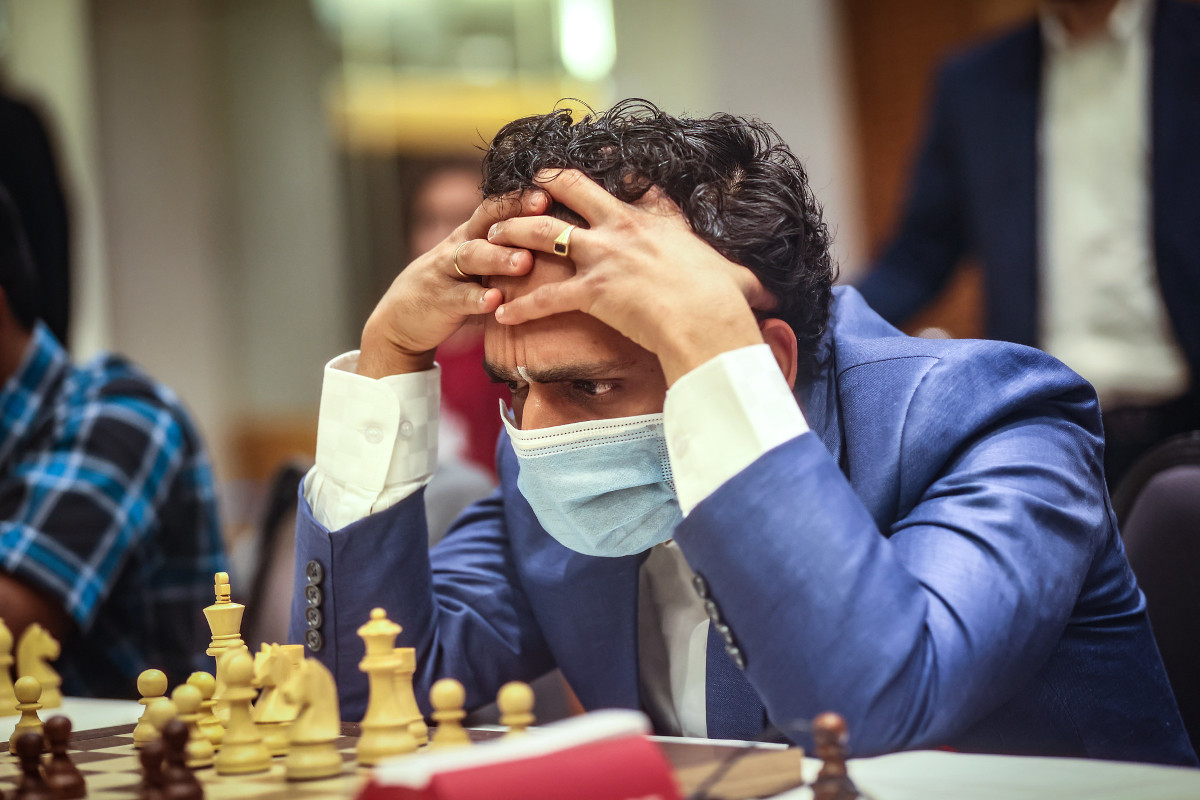 Uzbekistan gets 2-0 win over Ukraine

Only one of the four matches saw the winning team scoring victories in back-to-back sets. The Uzbek team, despite missing top star Nodirbek Abdusattorov, has impressed since day 2 of the competition — they had a slow start, as they lost to Azerbaijan in the first round of the preliminary round-robin.

Against Ukraine in the quarterfinals, Jakhongir Vakhidov was the hero for the latest Olympiad champions, as he won both his games on Wednesday. Facing Igor Kovalenko with white, Vakhidov chose the correct capture in a superior queenless position.

Black’s 28…Bxb5 was a mistake, but only 29.cxb5 keeps White’s advantage. Much like in Narayanan’s game, the bishop is the stronger minor piece here.

Vakhidov here found the most straightforward way towards victory with 32.Rxf6 gxf6 33.Bxc7, and Black is doomed. Kovalenko continued fighting until move 56, but the Uzbek never lost control over the position. 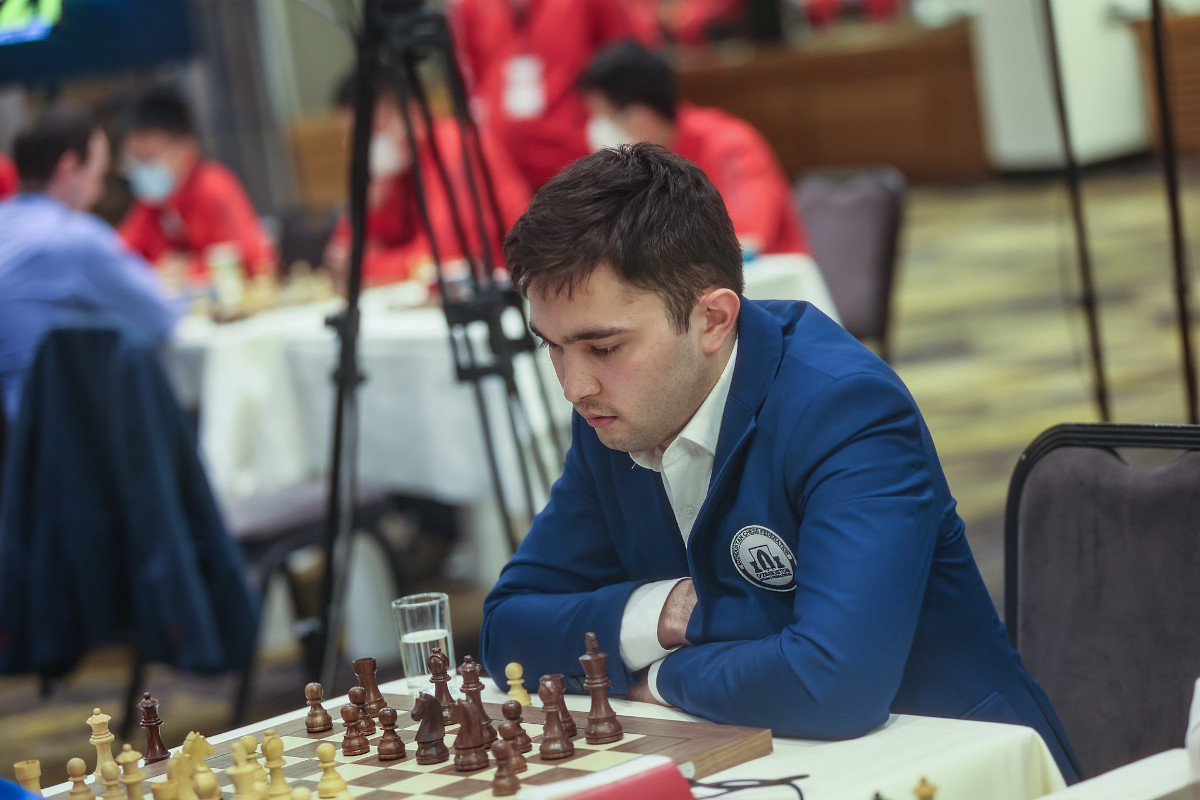 Given their dominant performance in the preliminaries, it is not surprising that China managed to beat Poland in the quarterfinals, despite fielding lower-rated players on three out of four boards.

After winning the first set by a 2½-1½ score — with wins by Lu Shanglei and Bai Jinshi — the Chinese drew on all four boards in the second set to reach the semifinals. The draws were by no means fightless, though, with Bai and Xu Xiangyu playing 90 and 134 moves respectively before getting the all-important half points.

In the game that lasted 90 moves, Poland’s Mateusz Bartel failed to play a pawn break that would have increased his chances of winning the game from a closed position.

Bartel’s 44.g5 was not the most precise here, since 44.d4, using the pin, was the most trying continuation to break up the closed setup. The lost tempo allowed Bai to regroup and keep things under control in the remainder of the encounter. 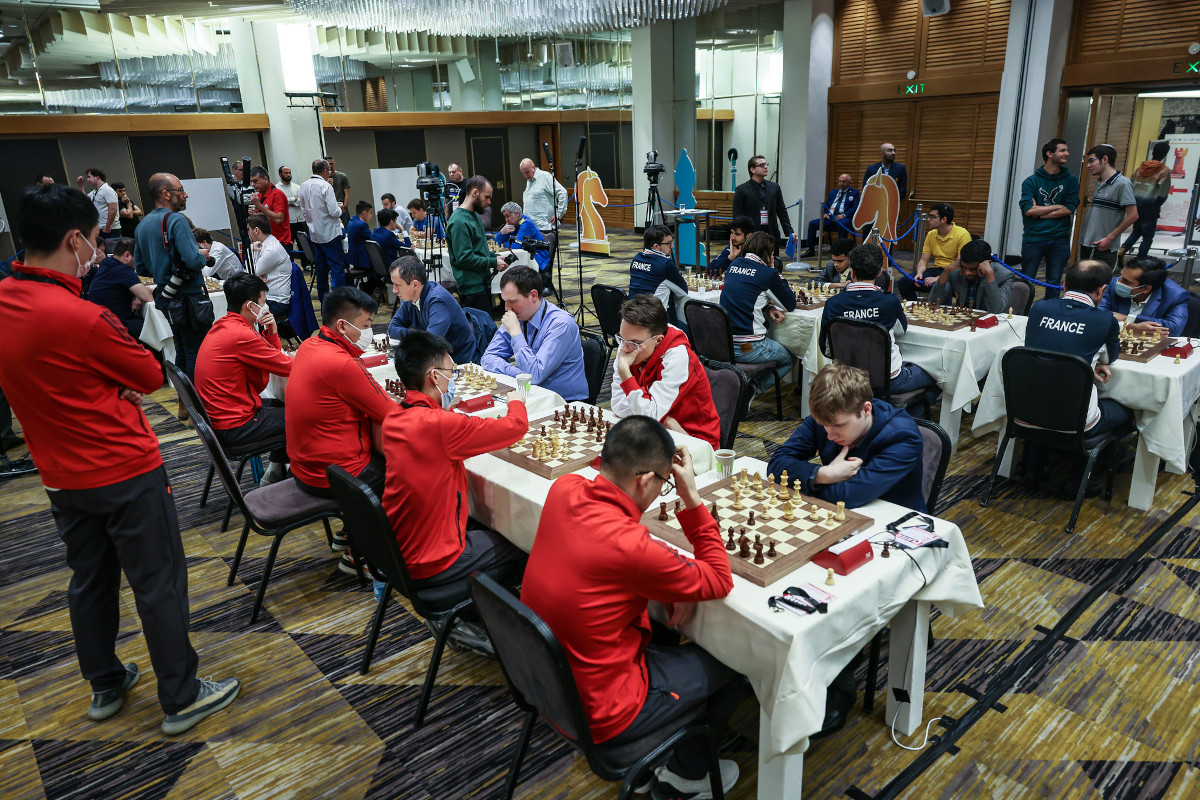 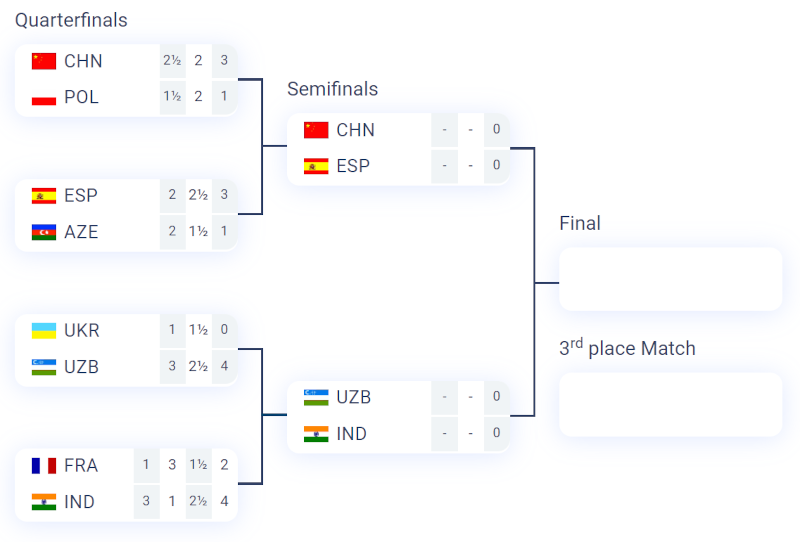