Although Magnus Carlsen only needed three games to take down Arjun Erigaisi, the match against the Indian prodigy was a well-fought confrontation. Carlsen won the first game in 75 moves, drew from an inferior position in the second, and got the clearest victory in the third, which lasted 41 moves.

In the previous event of the tour, Arjun achieved his first-ever win over Carlsen in round 7 of the preliminaries. Perhaps Tuesday’s match would have gone differently for the Indian, had he found an incredible stalemate trick in a rook endgame.

Here White went for 55.Ra6+ Kxa6 56.Kxc6, when Black’s d-pawn is quicker than White’s passer on the queenside.

Peter Leko, who is commentating the games with Rustam Kasimdzhanov, was utterly shocked, and noted that “this could have been the biggest save ever!”

The incredible line did not appear on the board, and Arjun eventually lost the ensuing queen endgame. Two games later, the world champion secured the victory that allowed him to take the shared lead with 6/6 points.

Giri bounces back against Praggnanandhaa

The other Indian prodigy in the tournament, Praggnanandhaa Rameshbabu, who is playing on-site in San Francisco, seemed to be heading to a bounce-back match win after losing to Shakhriyar Mamedyarov on Monday. The 17-year-old kicked off his confrontation against Anish Giri with back-to-back wins, but the Dutchman not only recovered from the 2-point deficit but also went on to win the blitz tiebreaker.

Giri had the stronger attack in a position with opposite-side castling in the first blitz game. He was playing black.

After 19.Nxe7+ Kh7 20.Nxf5+ Giri did not bother capturing the knight but immediately went for 20…Ra2, infiltrating along the a-file.

It was a brutal attack. A quick simplification left Black with a winning position, as Pragg resigned five moves later. 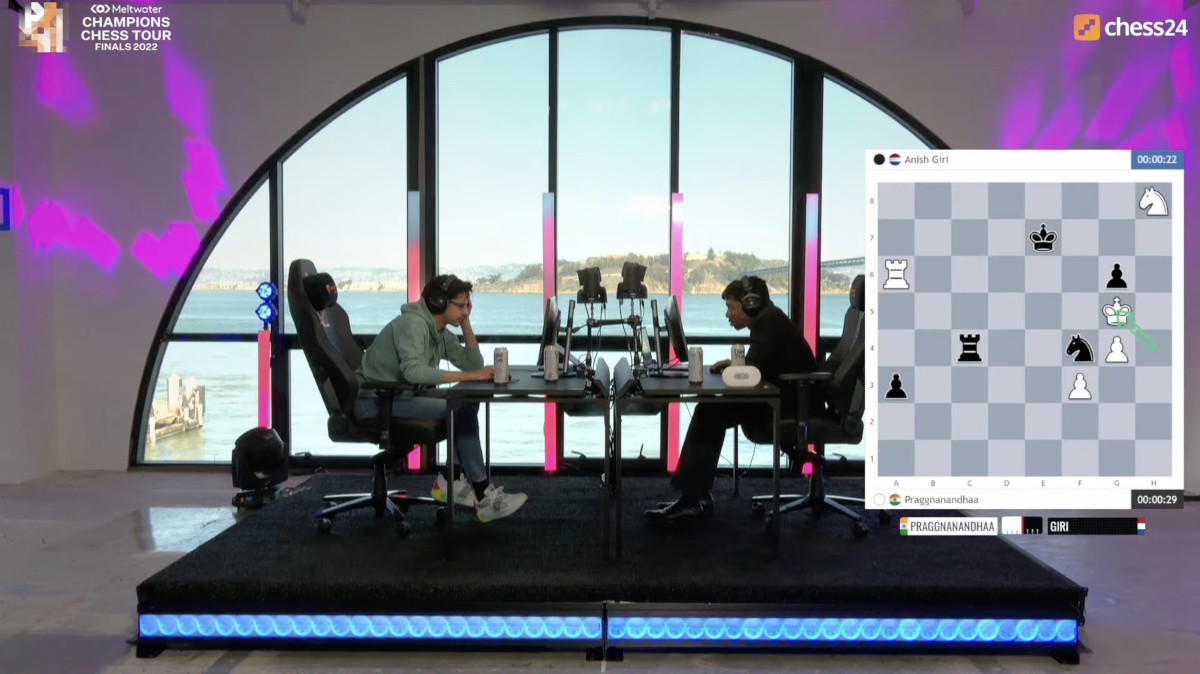 In a rematch of the Aimches Rapid final, Jan-Krzysztof Duda once again defeated Shakhriyar Mamedyarov. The Polish grandmaster won game 2 with the white pieces and drew the three remaining encounters to get a second consecutive match victory.

In game 2, Duda had two pawns for a piece in a complex position with queens still on the board, but he also had the safer king, which turned out to be the decisive factor in the end.

Not only is Black’s king much more vulnerable than its white counterpart, but Shakh’s minor pieces are — unfortunately for him — fully uncoordinated. Duda needed no fewer than 32 more moves to convert his advantage into a win, as the position was simplified into a pure knight endgame which was completely winning but needed to be handled somewhat carefully.

Rapid-chess specialist Le Quang Liem continues to prove his worth in the Champions Chess Tour. On Tuesday, he got a convincing 2½-½ victory over none other than Wesley So. The Vietnamese star won games 2 and 3 to get the all-important win.

So resigned in the following position in game 2.

After 31…Qe7 Black threatens to play …Ng3+ and …Qh3 (or …Qh3 first) with a devastating attack. So threw in the towel. 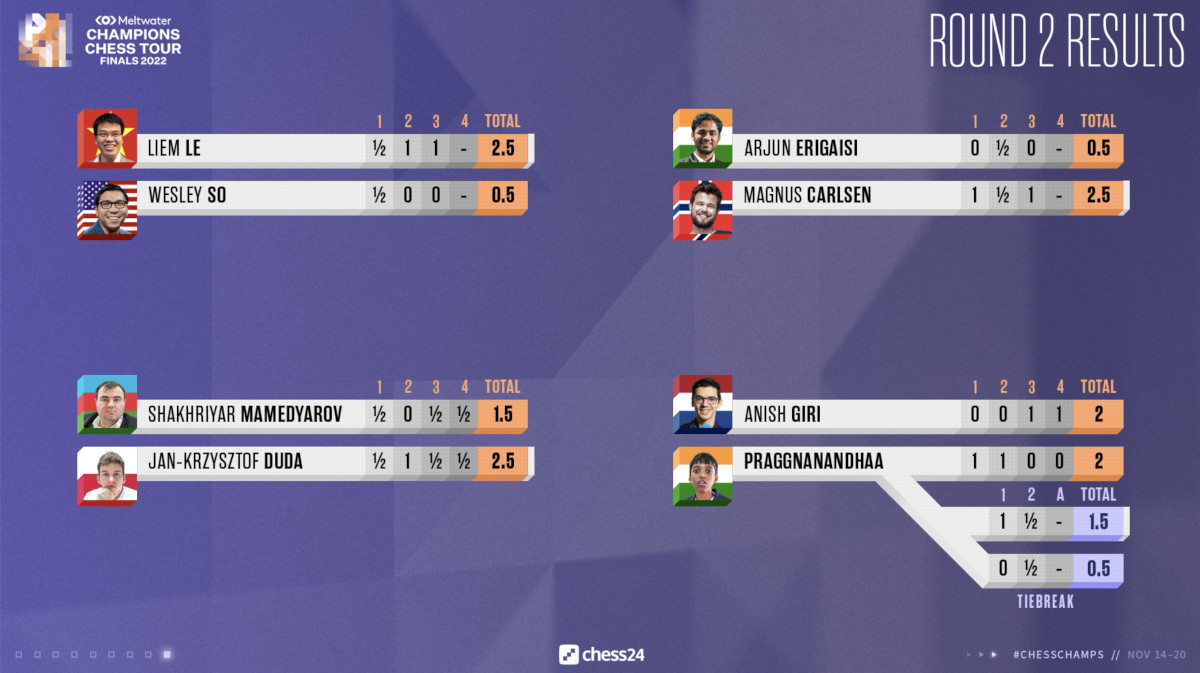 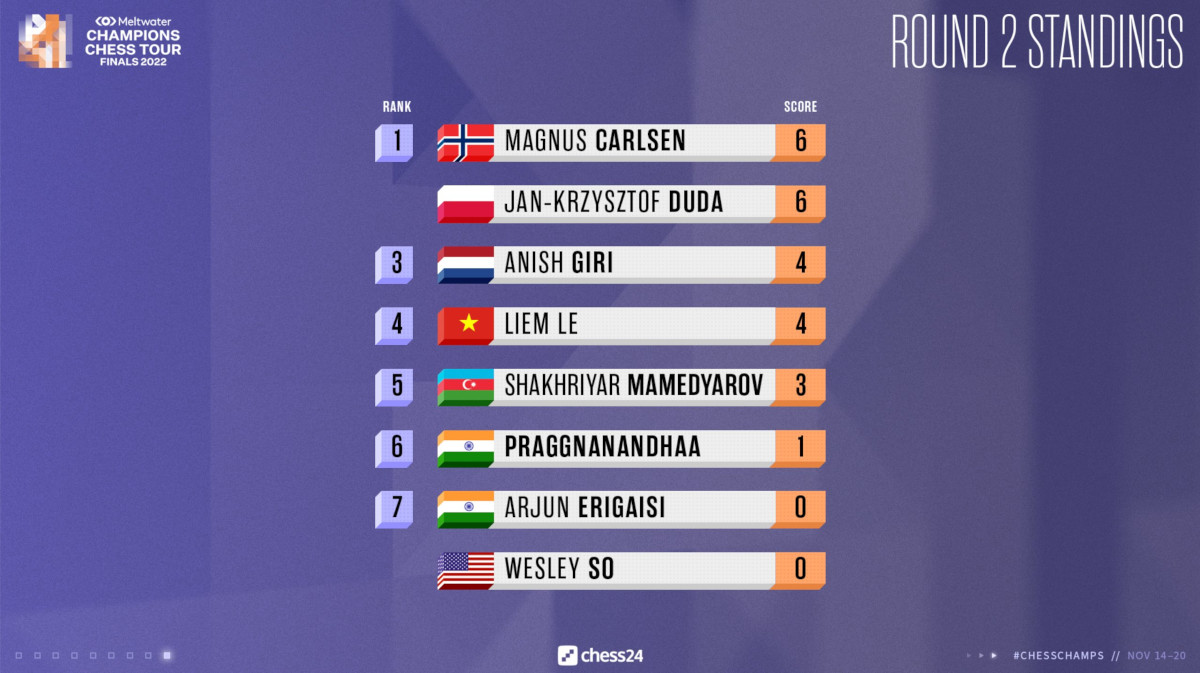