The team championship in Austria is played as a 12-team round robin and each match is a duel on six boards. All 12 teams meet on three extended weekends at one location to play their matches.

The first host was Jenbach. The line-up of the team Sparkasse Jenbach is almost identical to the German national team. Matthias Blübaum, Rasmus Svane, Alexander Donchenko, Rasmus Svane and the former German national player Rainer Buhmann form the basis of the team. In this line-up, the team usually belongs to the favourites for the title, which Jenbach indeed won in 2018 and 2020. But last year, the title went to St. Veit – the Croatian national team.

However, this year’s favourite is the ASV Linz, a new team in Austria’s first league. The team is sponsored by entrepreneur Markus Stöttinger, who recently also became new president of the Austrian Chess Federation. Stöttinger has signed 13 Grandmasters for Linz, including top Grandmasters Maxime Vachier-Lagrave and Parham Maghsoodloo and other well-known players. With a rating-average of almost 2700, the ASV Linz is the clear favourite to win the title. 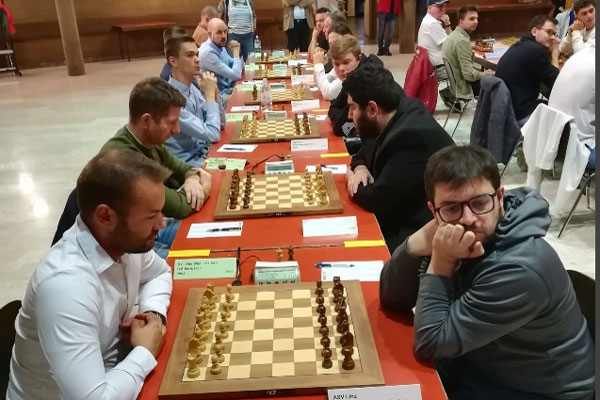 But on their debut in the League, the ASV Linz suffered a minor setback and only reached a 3-3 draw against the defending champion St. Veit. On Friday, Linz won a competitive match, in which seven games were decided, against Feffernitz.

In round three Linz came to a clear 4.5:1.5 win against SPG Fürstenfeld/Hartberg but on Sunday followed another 3-3 draw, this time against Jenbach – all six games of this match ended in a draw.

Jenbach had won all their three previous matches – against Sparkasse Götzis, Maria Saal and St. Veit, and after four rounds they share the lead with SK Ottakring. Linz shares third and fourth place with Feffernitz.

Top scorer of Jenbach (and the league) is Rainer Buhmann with 3.5/4. In round 3 he won an interesting game against Ante Saric: After avoiding a theoretical discussion in the opening, Buhmann sacrificed a pawn for an attack, which after some complications led to a better double-rook endgame that Buhmann won convincingly.

Great chess show at the DreamHack in Hyderabad

Chocolatito vs Estrada 3 Live on DAZN