After nine exciting rounds, the largest European Team Senior Chess Championship so far has come to an end in Dresden. A total of 76 teams from 16 nations took part and competed for the titles in two age categories: 50+ and 65+. Whilst there were quite a few female players in some of the teams, we also had four women’s teams competing. A total of 350 players participated.

Even the weather made sure that the Saxon capital was ideal for the tournament, as we were lucky to have beautiful autumnal sunshine for the majority of the tournament. The playing venue, the International Congress Centre Dresden, right on the banks of the Elbe river provided the players with quite a unique backdrop as some were able to see the well-renowned skyline of historic buildings right from their tables.

A small opening ceremony took place on 27 October with a short performance by a Dresden youth dance troupe and a welcome by Robert Baumgarten from Stadtsportbund Dresden, before the first moves were made under the watchful eye of Werner Stubenvoll and his team of arbiters.

The rounds started at 15:00 every day, and it was great to see so many chess players take part in an over-the-board tournament after the disruption Covid has brought since spring 2020. The nine rounds challenged all players, and on the penultimate day there was a distinctive shift in the mood within the playing hall as it became evident that these last two rounds were crucial to the final standings of the tournament. 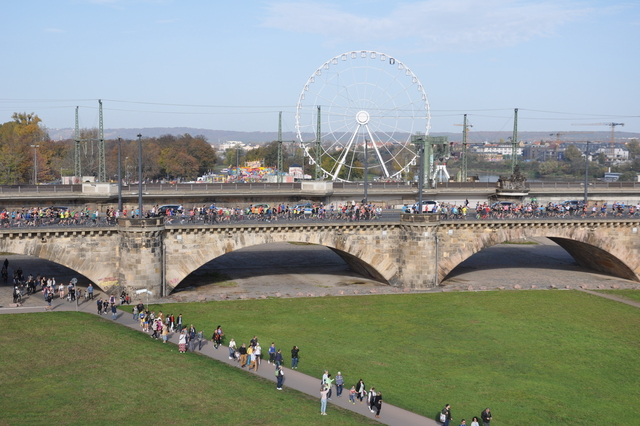 England 50 – 1, the new European Team Seniors Chess Champions, were very strong right from the start, just like Berlin 1 and Germany, who took the other two podium spots. Slovakia came in fourth position.

In the 65+ category, Lasker Schachstiftung from Germany are the new champions, while Finland 65 and Germany 3 came in second and third respectively. Sweden 1, who were in the lead earlier on, finished fourth. The only French team, Cercle d’Echecs de Strasbourg, had a strong start, but then ended up in seventh place with 12 match points. 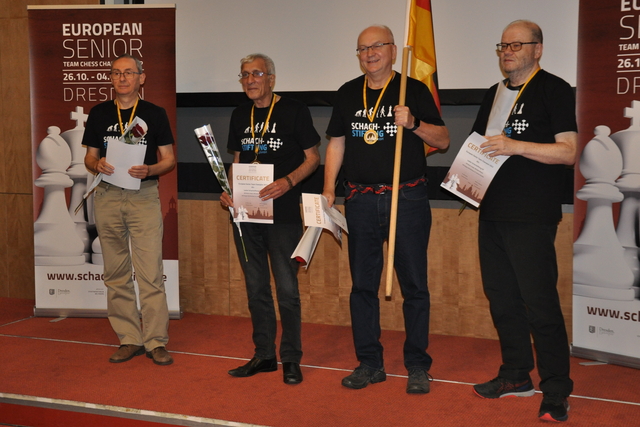 During the closing ceremony on 4 November, Jan Donhauser, the Deputy Mayor for Education and Youth in Dresden, was the guest of honour. He addressed the players and congratulated them on their success. He hopes that further tournaments will take place in Dresden in the future. Some players also expressed their gratitude for a well-organised tournament and a great atmosphere.

All participants and visitors had the opportunity to discover the sights of Dresden in their spare time, as well as savour some Saxon cuisine. Every day had different activities on offer, but everyone could also go and explore the city in their own time.

There were visits from two well-known German chess players. Dr Hübner gave a simul, as well as presentations on two consecutive days, while Elisabeth Pähtz joined us to talk about her new book and to give a simul. 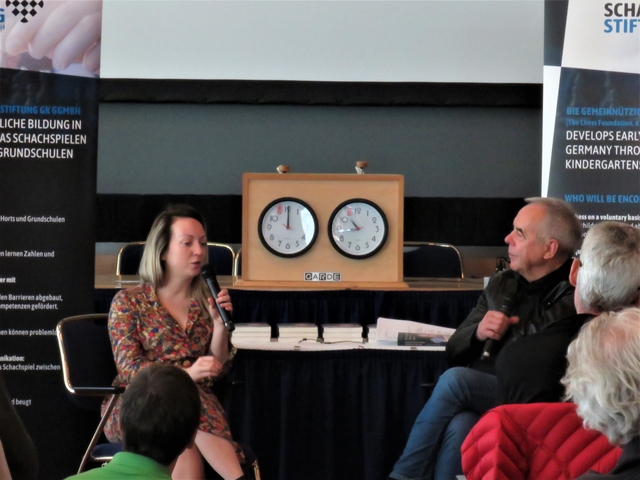 The venue itself was no stranger to chess, as it saw all the Chess Olympiad participants from 2008 walk through its doors every day for the duration of that tournament, and it was lovely to see such great team spirit united yet again, embodying the FIDE motto.

It was great to see such great games over the board again after so much disruption of normal chess games over the past two and a half years. We hope all participants will remember their time in Dresden with fondness. And maybe we will see some of them again in future events!

Mock polls to focus on voting gear performance, not turnout