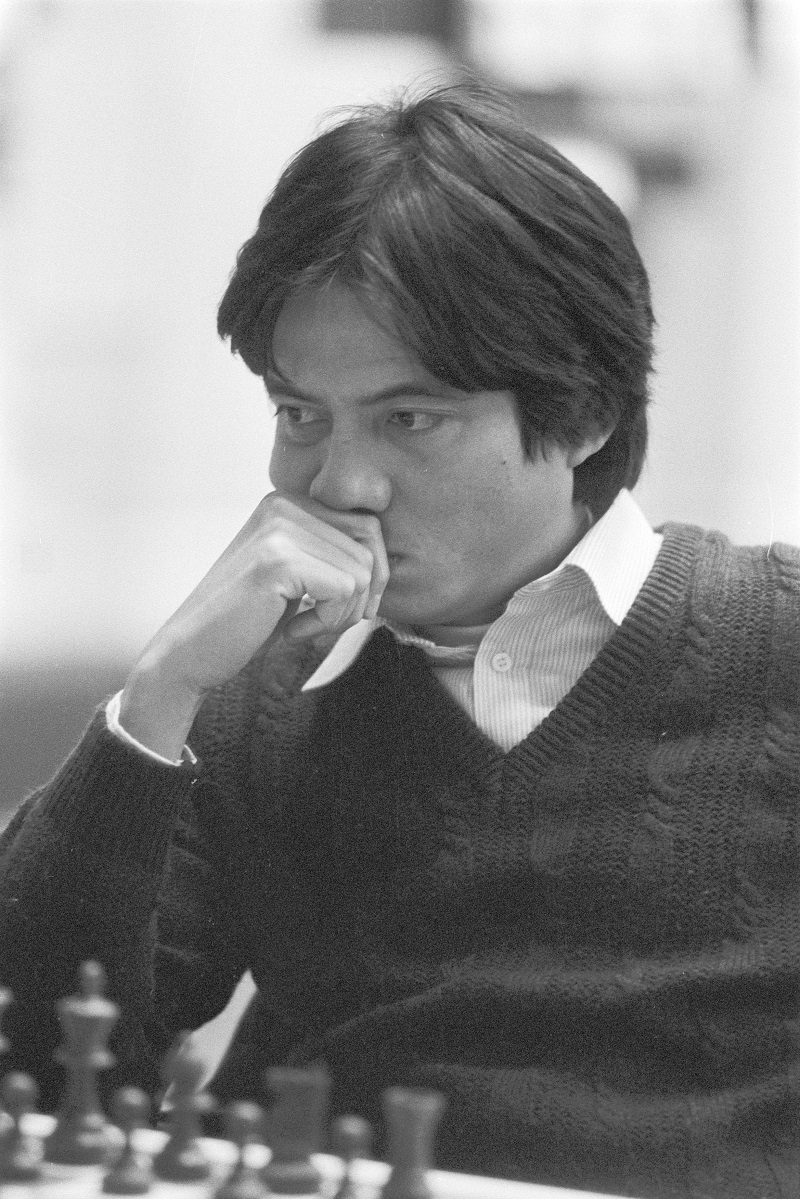 I take a break from my usual historical articles to pay tribute to a countryman who has been recently honored with one of the highest distinctions in chess — his induction into the World Chess Hall of Fame. In a sense, this tribute is still partly historical, as his long career is now all part of chess lore. He is none other than Grandmaster Eugenio Torre of the Philippines.

Torre, or “Eugene” as he is fondly called, was born on November 4, 1951 in Iloilo City, the capital of the province of Iloilo in the Visayan Island of Panay. He first appeared as the Philippines’ participant in the World Junior Championships of 1969 and 1971. In 1972, he became an International Master when he won the Asian Zonal Championship.

Torre was then the country’s third International Master, and a match was arranged between him and fellow International Master Rodolfo Cardoso for the privilege of manning the first board for the Philippines in the 1972 Skopje Olympiad. Cardoso had been the Philippines’ top player, but Torre took their 6-game match in virtual a changing of the guard. He would become the force and face of Philippine chess for many years to come.

As impossible as it may be now to imagine Asia without a Grandmaster, the region was without one before 1974. In 1974, Torre became the first Asian to attain the coveted title when he won silver for individual performance on Board 1 in the 1974 Nice Chess Olympiad.

One of his first tough tests as a Grandmaster came in the 1976 Marlboro-Loyola Kings Challenge in Manila. Playing Anatoly Karpov and two other outstanding Grandmasters in Ljubomir Ljubojevic and Walter Browne in a double round-robin, Torre won each of his mini-matches to finish clear first. Karpov’s loss to Torre was one of his first few as World Champion.

Torre closed the 1970s with other strong performances. He peaked in the 1980s, reaching as high as number seventeen in the world rankings and joining the mix of potential world title challengers. He realized it partly when he won the Toluca, Mexico Interzonal of 1982 jointly with Lajos Portisch. He finished ahead of former World Champion Boris Spassky, Arthur Yusupov, Lev Polugaevsky, Yasser Seirawan, and John Nunn to name a few of the strong participants. In the process, he also became the first Asian to qualify for the Candidates’ Matches. 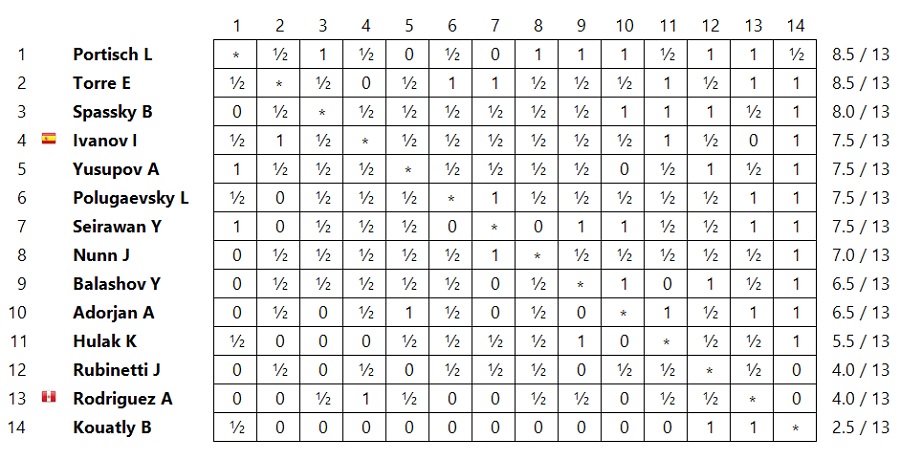 Torre had fair chances coming into the knock-out matches as he had scored respectably against the world champions of the last three decades. He stood 2.5–1.5 against Mikhail Tal, 2–2 against Tigran Petrosian, 1.5–2.5 against Vassily Smyslov, and 3.5–5.5 against Karpov. He lost his 1983 quarterfinal match, however, against Zoltan Ribli of Hungary.

In 1984, Eugene was selected as one of the participants of the USSR vs. The Rest of the World that was held in London, England. Fourteen years after the first match of the kind was held in Belgrade, the USSR strengthened its team with the inclusion of Karpov and Garry Kasparov at the top two boards. Eugene played Board 10 where he was paired with Andrei Sokolov. Although the USSR won the match 21-19, he defeated Sokolov in two out of their three games to score the highest winning percentage for the Rest of the World team.

These are Torre’s most memorable achievements, but he has so much more. I risk missing some of them, but among the most notable are:

It has been in the Chess Olympiads, however, that Torre has left his legacy. From Siegen 1970 up to Baku 2016, he has played in a total of twenty-three Olympiads, the most by anyone in history. Manning Board 1 in most of these appearances, he delivered several medal-winning performances. Aside from his silver medal in Nice 1974, he won bronze in Malta 1980, and another bronze in Dubai 1986. In Thessalonica 1988, he led the Philippines to its all-time best finish of seventh place.

In Baku 2016, he gave what was perhaps his most scintillating performance. Manning Board 3, he played all eleven rounds to score ten points out of a possible eleven (on nine wins and two draws) for an impressive 2836 performance rating. At 64, he scored the most points among all participants of that event. It was good for another bronze.

In 2021, Torre was inducted into the World Chess Hall of Fame along with Judit Polgar and Miguel Najdorf. The ceremony was often postponed, but it finally materialized on October 4, 2022 in St. Louie, Missouri, USA. His induction is certainly a deserved recognition of more than half a century of excellence and of his part in chess history. 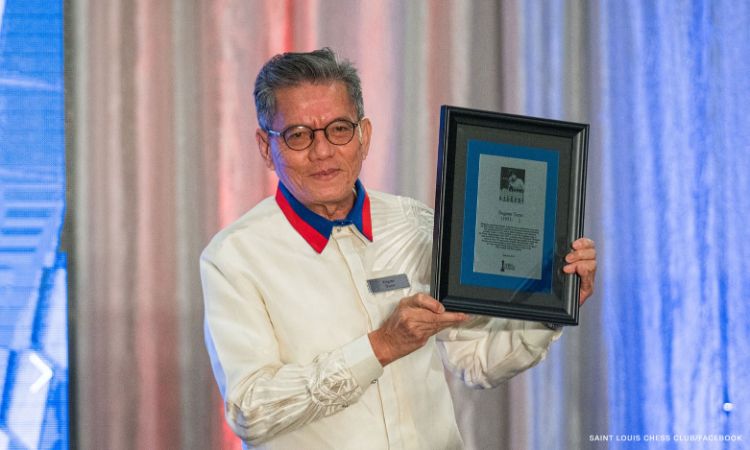 Following the career of Torre has been a thrill, and I am certain my fellow Filipinos have been as involved as I was in all his important matches. I remember the Biel Interzonals of 1985 where he was gunning for another Candidates’ appearance by finishing in the top four of the event. A draw in the last round would have ensured fourth place, but he lost to Gyula Sax to fall into a three-way tie for the last Candidates’ slot with Nigel Short and John van der Wiel. A six-game playoff among them ensued, but Torre lost his grip altogether, and it was Short who advanced. That has been one of my most agonizing moments as a chess and sports fan.

The highs, however, have been plenty. His victories at home and abroad against the most durable masters of his time took on national significance. I thought these successes spoke well beyond sports. In the Olympiads, especially, I have always been baffled how, throughout the years, he would take on Board 1, the toughest assignment, yet turn out to be the Philippines team’s steadiest and most productive performer. The past decade he has slowed down and has chosen his tournaments, but, as he showed in Baku, he always finds his finest form whenever it is time to play for flag and country.

With his achievements, dedication to his sport, and commitment to Philippine Chess, Torre has been an inspiration to his countrymen. I saw in him the best of the Filipino talent, skill, and competitive spirit, and he showed these all on the world’s brightest stage.

To Eugene, a joyous birthday, and our heartfelt congratulations!

The following notable games are presented in the dynamic replayer below. To switch between games, select an entry from the list.

Here are some of Torre’s games against the best of his generation:

Suns Clinch Top Seed on Back of Booker’s 49 Points