The Let’s Check option is a fascinating way to compare your moves with the top choices of other engines, but imagine you played the second best move every time, yet only a small 0.05 centipawn difference from the top best move. Let’s Check will understandably just say you had a 0% Engine Correlation, since none of your moves match the top choice, while failing to give a more complete picture of your play. That is where the Centipawn Analysis comes in. With it, you will enjoy a more thorough evaluation of each player’s performance in a game or tournament.

Centipawn Analysis is a feature that can be executed as an independent game review with an engine, or be included as part of the Tactical Analysis. In a nutshell, it analyzes every move to see what the best engine move was and its evaluation and then the move played and its evaluation, and compares the relative centipawn loss, if any.

If you open a single game in ChessBase, you can also run a pure and quick analysis with it by going to the Analysis menu and selecting Centipawn Analysis.

For example, let’s suppose this is the position being evaluated:

Aronian played 17. f3 here which the engine gives as second best, albeit by a minuscule margin:

Assuming no other engine disagrees with this ranking, Let’s Check will report this as a miss since it does not match an engine’s top choice. In contrast Centipawn Analysis won’t care about the overall ranking of the move, and only the difference in evaluation, which in this case is 0.07 centipawns.

Your key to fresh ideas, precise analyses and targeted training!
Everyone uses ChessBase, from the World Champion to the amateur next door. It is the program of choice for anyone who loves the game and wants to know more about it. Start your personal success story with ChessBase and enjoy the game even more.

Like Let’s Check, the Centipawn Analysis will provide a report at the end of the game, informing you of the average error rate during the game. Here is a comparison of their evaluations of the same game. First we have the Let’s Check summary:

Base on pure top engine matches, Anand’s result was solid, but nothing special. However when looking at it with the Centipawn Analysis we get a very different impression: 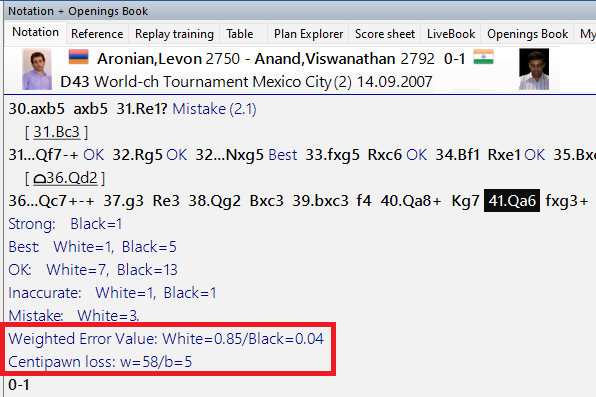 One of the biggest values is that it is effective at evaluating a game that was lost via ten moves yielding 0.15 centipawns, accumulating to a total of -1.50, or nine perfect moves and one blunder costing 1.50. The centipawn analysis will give the same error rate in the end, since losing one way or the other makes little difference in the end, but it will bring up this breakdown at the summary at the end all the same.

So how good is 0.04? It that really ‘exceptionally low’ as I stated? To put that in perspective, an elite grandmaster tournament is usually won with a tournament average error rate in the 0.12-0.14 range. How do I know this?

Analyzing a player or a tournament

ChessBase allows to do more than just find the report of a single game, it allows you to run a batch of such analyses on a group of games and tell you the average performance of everyone. Let’s imagine we want to analyze the complete Sinquefield Cup recently finished and see how the players did overall.

First we open up a list of all the games of the tournament, then highlight the same you want analyzed.

Now go to the Analysis tab and click on Centipawn Analysis. Although it will give a full report in each and every game, it will do more than that. 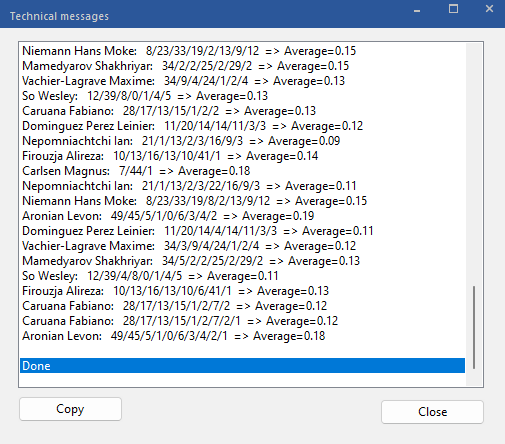 It will provide you with a full summary on the run, as well as charts depicting their relative centipawn error rate performance compared to their Elo performance.

But if you want to be able to work with the data you need not content yourself with this. In the folder where the actual database is located, an Excel spreadsheet will be located with detailed breakdowns.

Centipawn is a fascinating atemporal way of testing the pure quality of play based on engine analysis, and can be used to test a game, even yours, to see how you are doing. As always, be careful about trying to reach verdicts on single examples, since even I have short wins that enjoy a score below 0.10, whilst fully aware I could never maintain that as an average.