The tiebreaks for the Women’s Candidates were the fruit of discussions with the players and as a result broke from a tradition going back a decade in world championship events: no Armageddon game! It is fair to say that the idea of a champion being declared via a form of blitz lottery has left a lot to be desired, regardless of whether it be a Candidates tournament or world title match, and the Women’s Candidates became the first to eschew this eventuality.

The system will still dwindle down to pairs of blitz games if no player is able to pull decisively ahead, but once it reaches pairs of blitz games of three minutes with a two-second increment, these will be repeated until one player is able to pull ahead in these pairs. In many ways, it brings to mind the tennis tiebreaks which work similarly, and have led to some epic bouts such as the 1980 Wimbledon final in which McEnroe won the 4th set tiebreak 18-16.

Regardless, while this possibility did not pan out, the rapid games were not lacking in excitement. 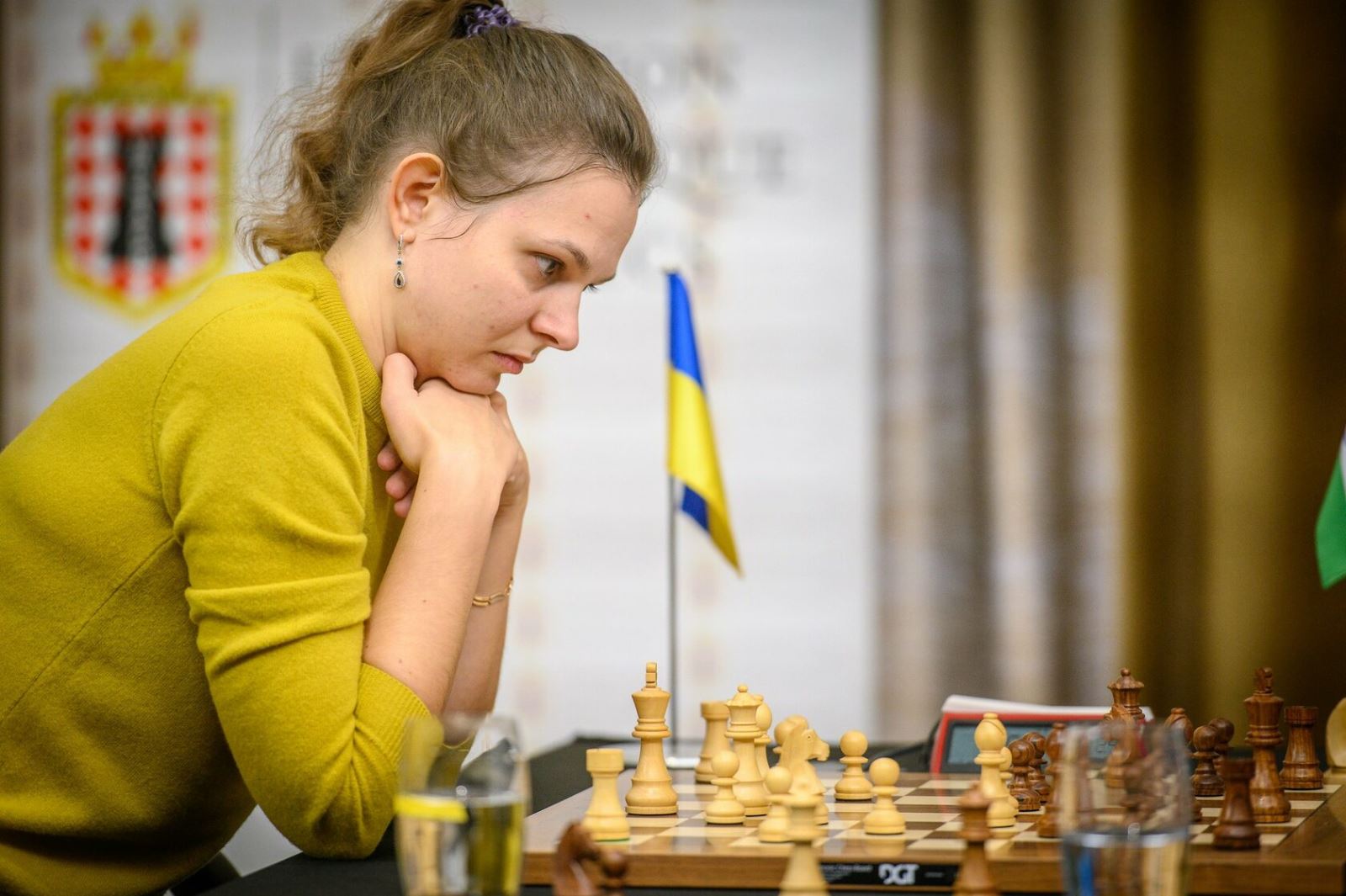 The first game set the stage for the openings likely to be seen in this four-game mini-match of rapid games. Each to be played at the rate of 15 minutes plus a ten-second increment. Unsurprisingly, with Ana Muzychuk as white and Humpy Koneru as black, a Petroff appeared on the board, but the same sort of fighting position we had seen during their classical games.

The key move, as will be explained soon, was after 16. Bf5

While the game did not produce any particular fireworks of note, this idea by Muzychuk of g4 and Bf5 would repeat itself two games later, albeit in an overall different position. Why is this important, and what is the relevance?

Games one and two ended in draws after 32 and 34 moves respectively. Both were high quality games, but the balance never really seemed at risk. Game three was where the drama really took place.

Game three opened with yet another Petroff, but the curiosity started at move 10. Bf5.

White played 10. Bf5 here, with the idea of 11.g4 and Black had been blitzing the moves out, taking a few seconds at a time, showing this was all well within her preparation. But as soon as this move appeared on the board, Koneru went into a long think, here and on her next unforced move. GM Igor Nataf, who was providing excellent commentary with IM Almira Skripchenko in English. It was my first time hearing him as a commentator, and will say that his fluency was impressive, even with a distinct Maurice Chevalier flavor, and they worked great as a team. 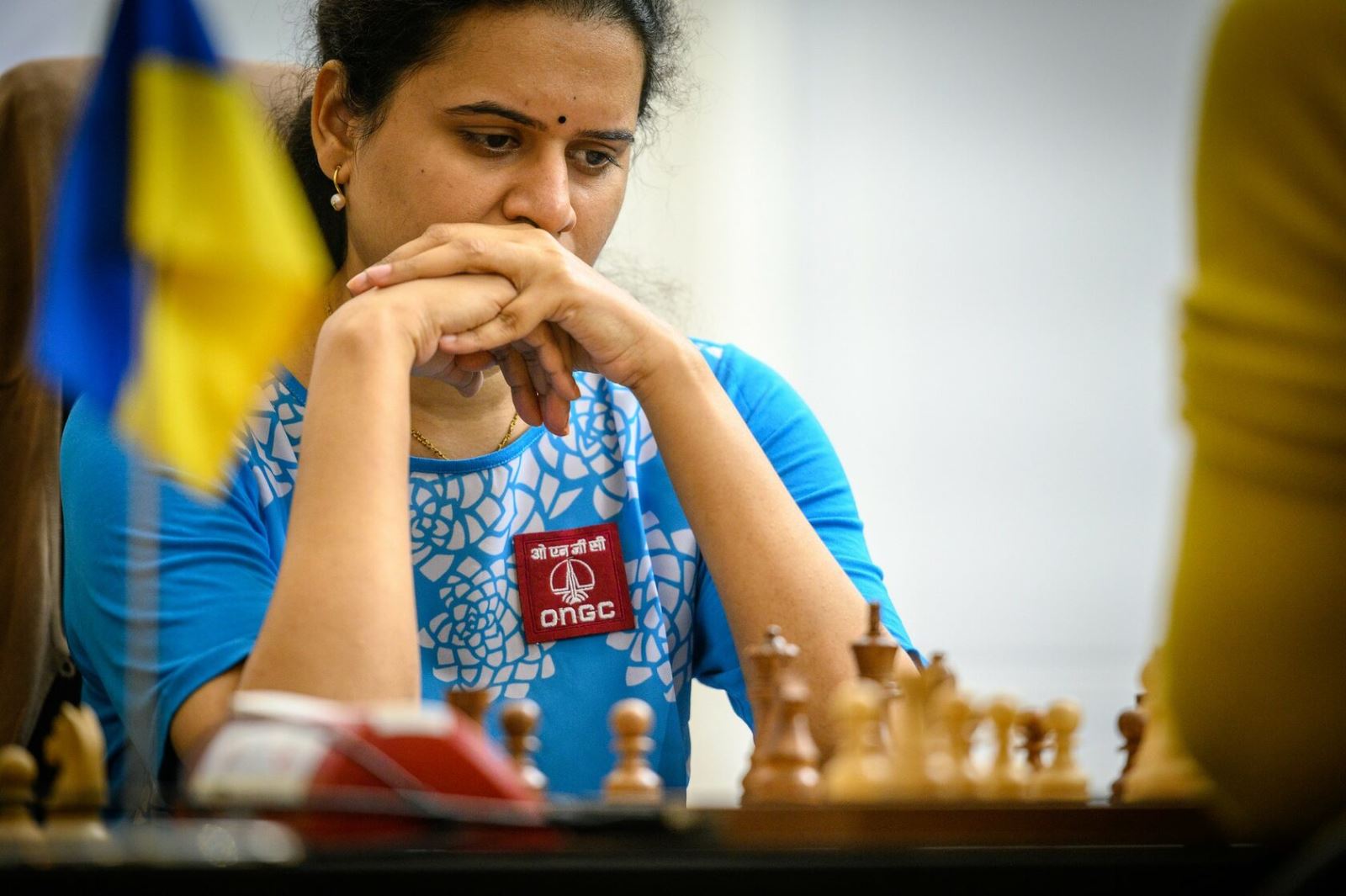 Let down by her preparation | photo: Michal Walusza

Upon seeing the lengthy hesitations by the Indian player, he was merciless in his condemnation, stating this could not be considered anything other than catastrophic opening preparation. His strongly opinionated statement was backed up with solid reasoning as he explained that the engines gave Bf5-g4, or the reverse move order as their top recommendations here, and since Koneru had been blitzing her moves out until now, it was unconscionable that she not have this prepared even the slightest bit. This was not some obscure sideline, and nor was the idea even unexpected since Muzychuk had employed a similar sequence in game one (see above).

It was not a promising start and soon enough black got into serious trouble. The climax would happen just five moves later.

This position is very rich in complications as well as intimidating threats. White is obviously invited to grab the g7-pawn with 16. Rxg7, but there are more than a few issues to consider. After 16…Bf6 hitting both g7 and e5 (which is pinned because of the queen on e2), things can get hairy very quickly. For example, 17. Rxf7 Bxe5 18. Nxe5 Nxe5 Black is threatening the rook on f7 as well as the unpleasant 19… Nc4.

As it turns out, this is actually the best line for White. After 19. Rxh7 Nc4, White continues with 20. Be3 the only move, but a good one. It is very hard to judge here, especially in a rapid game where a wrong move could cost the entire match. Muzychuk was calculating furiously but unable to come to a clear conclusion and decided to err on the side of caution. 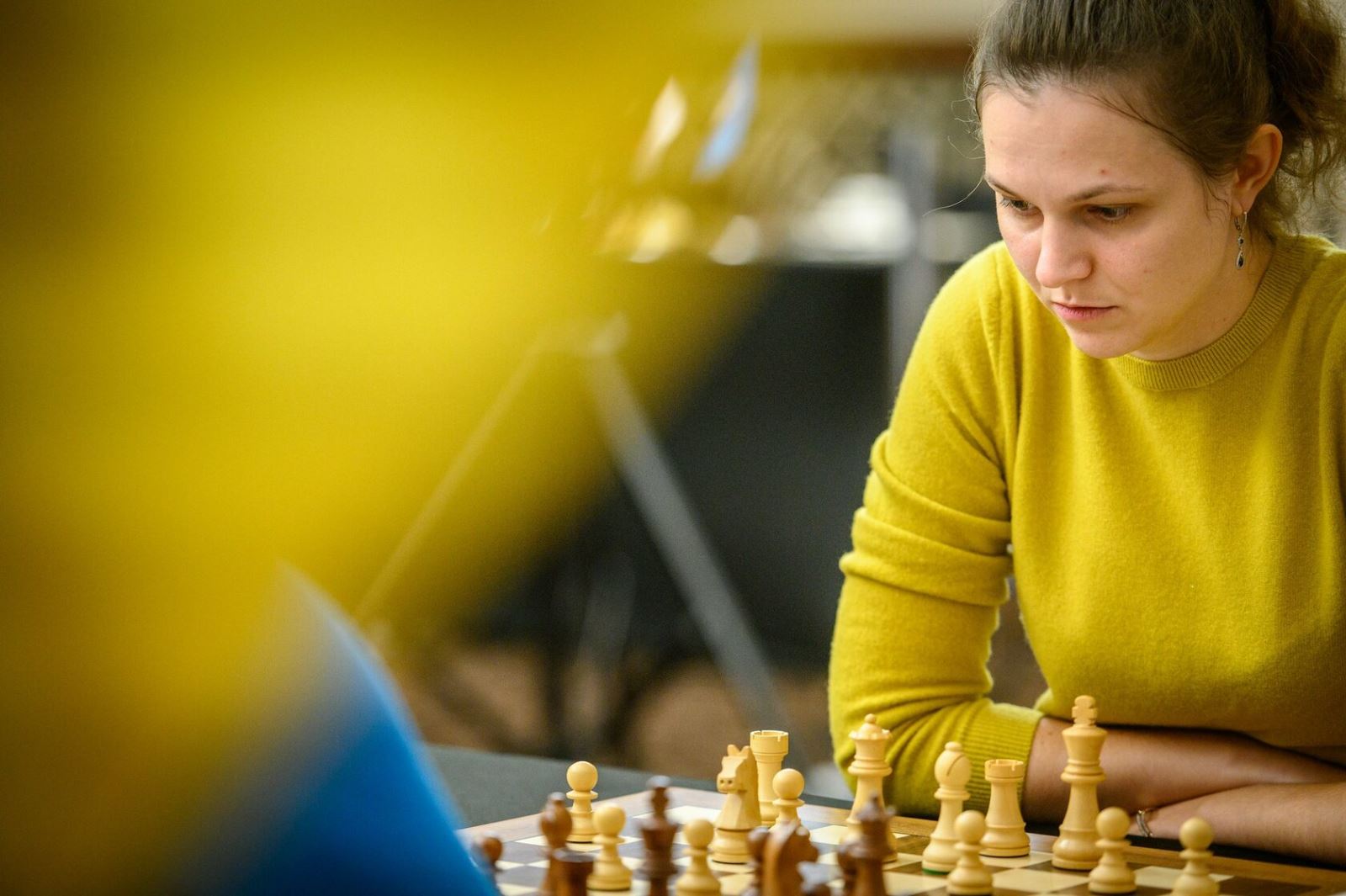 Nerves began to show for both players as Koneru tried to right the ship and Muzychuk attempted to keep her wining advantage alive, though unable to commit. Suddenly, after a last slip with 21. Rxh7?

The commentators were aghast since the idea of …Bxc3 had been hanging for a couple of moves already, and 20…Rd6 had clearly been played with the idea of swinging it into a counterattack with …Rb6. Sure enough, Humpy saw it and unleashed 21…Bxc3! The engines will declare this a ‘harmless’ 0.00, but go tell that to the human players who need to work through the many lines that don’t lead to that perfect draw. Ana Muzychuk was shellshocked and she used up almost all her time trying to recompose herself and come up with a solution. Not to mention reassure herself she had not just been dealt a death blow.

Taking a deep breath, she played the very human move 22. b3, and the battle continued. Muzychuk was not the only one with nerves frayed, and Koneru soon was completely lost again. It all came down to this final key position:

Take a few seconds to look at the position above. White’s rook is on h7 and protecting the b7-pawn, with the king on b8. Black has powerful drawing threats of her own with an endless barrage of checks on the second rank. It is White to play and win. Can you see how?

Here is a picture to allow you to not see the solution immediately: 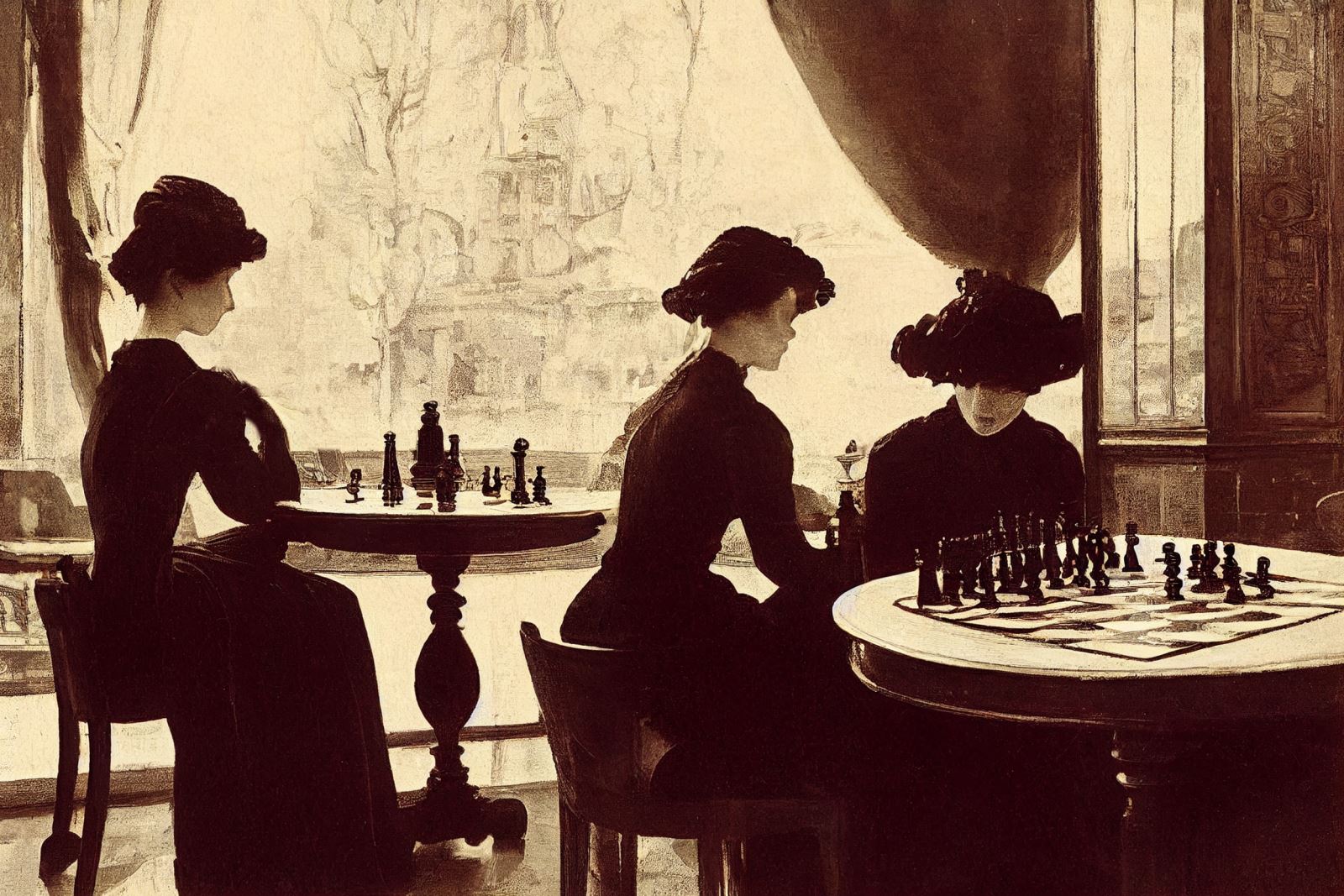 The solution lies in understanding that White would win immediately with 30. Rg1 and the unstoppable 31. Rg8+ and mate were it not for the fact that it is stopped by Black’s perpetual checks on the second rank. The solution is a powerful interference move with 30. Nd2!! This beautiful shot isn’t necessarily obvious even with plenty of time on the clock, nevermind when living off of the ten-second increments. The point is that after 30…Bxd2 31.Rg1 wins on the spot, and if 30…Rxd2 then 31. Rxd2 Bxd2 32. f6 and the pawn cannot be stopped.

White missed the shot and the players shook hands a few moves later on move 38. One can only speculate on the state of their nerves at this stage with a fourth rapid game to come. 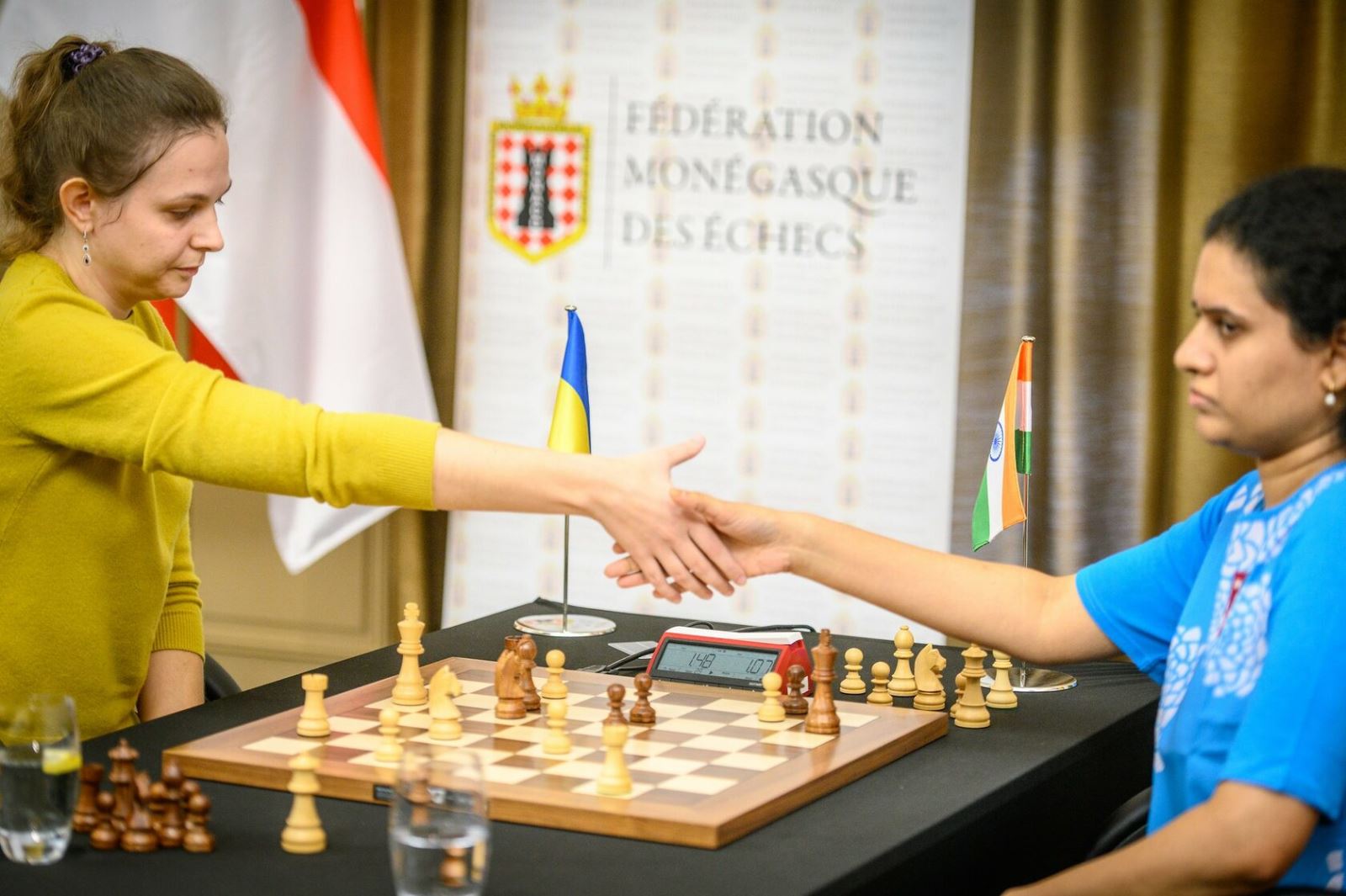 Sadly, game four was as anticlimactic as can be, though not completely shocking after that wild game before. Once again, Humpy Koneru’s preparation left her wide open and she was on her own as of move 13, then she blundered on move 16.

This loses a piece on the spot, and Ana Muzychuk took exactly nine seconds to spot it and play it. 16… Bxd4! 17. exd4

A tragic way to lose a match, but full credit to Ana Muzychuk for her clutch win in game four of her classic games followed by a victory in the rapid games that ensued. Both players are to be congratulated for the thrilling display of chess. She will now meet Lei Tingjie and decide the fate of Pool A. 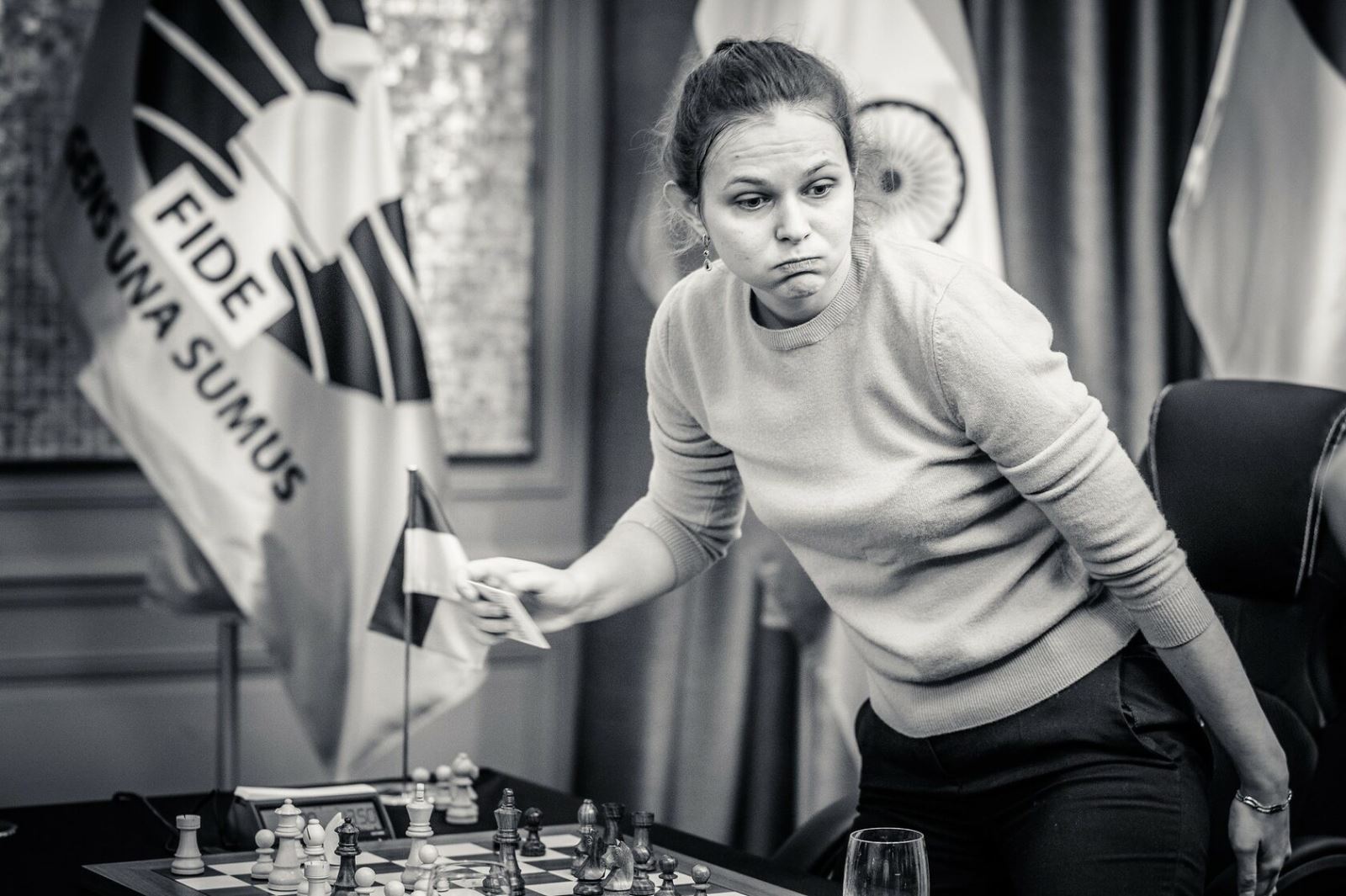 Ana Muzychuk’s look of relief is one we can all sympathize with. | photo: Michal Walusza

With prudence, PHL is ready for Covid-19 exit