Both Anna Muzychuk and Humpy Koneru came similarly prepared in a game that followed very closely the last-round tussle in the recent US Championship between Samuel Sevian and Hans Niemann. By move 11 it was the only game that matched their opening moves, which they followed until move 18. Rg1

Here Hans Niemann had chosen 18…Nf6, and after 19. Rxg2 Bc5 Sevian had opted for the sharp 20.Rd1. Muzychuk deviated from this and instead opted for 18. Nc5, but was unable to make anything of it. 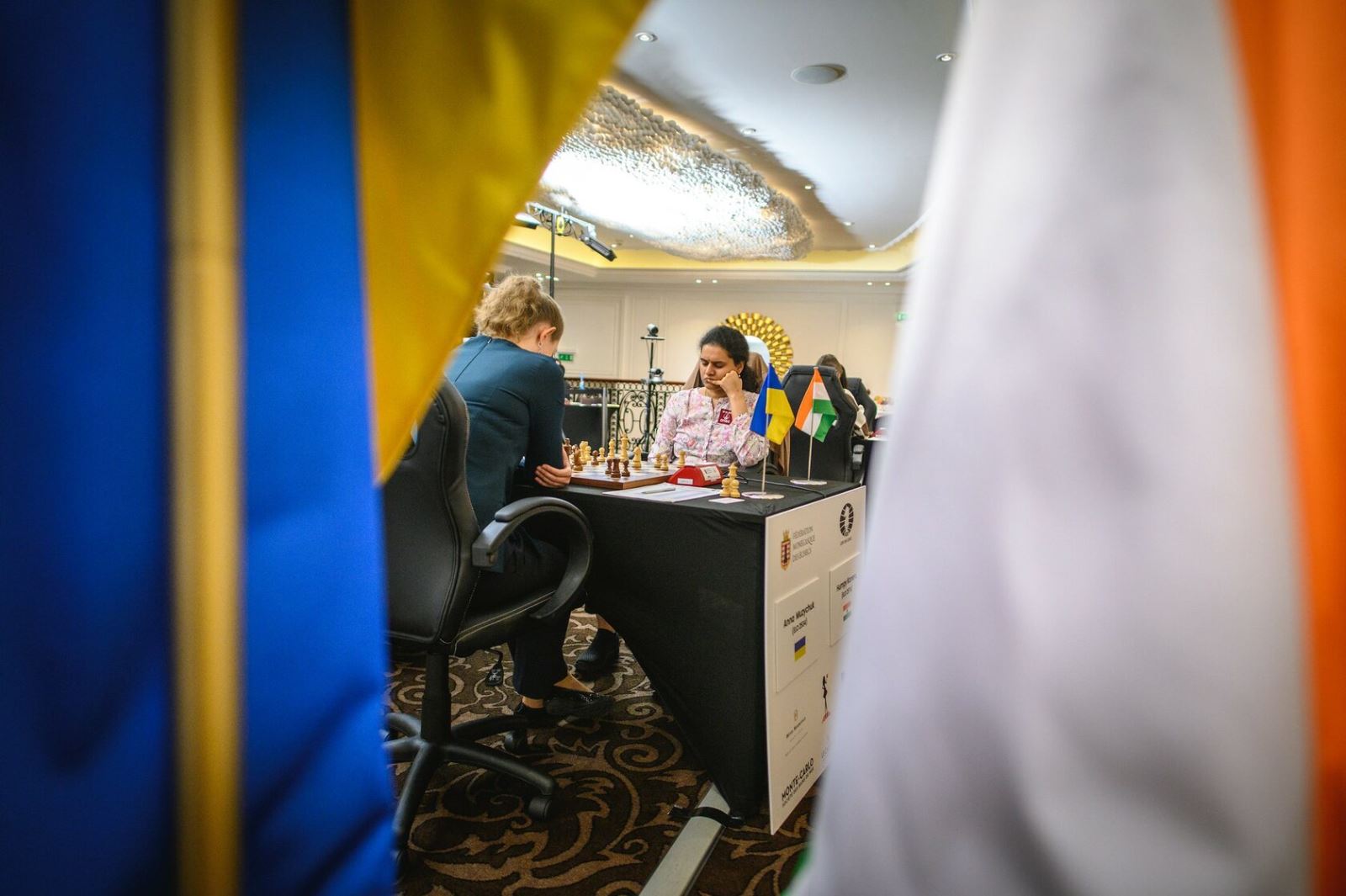 Ana Muzychuk and Humpy Koneru are among a handful of female players to have cracked past 2600, and handily. | Photo: Michał Walusza

The only time the engines think Black had anything to even hope for was a few moves down the road after 26. f4?!

Semi-Tarrasch: A universal weapon against 1.d4

Even though the Semi-Tarrasch cannot offer a complete repertoire against 1.d4, being conditioned of White’s move order, it is an excellent complement to the Nimzoindian Defence. Throughout history, great players like Fischer, Kortschnoj and Kramnik have included the Semi-Tarrasch in their repertoire which strongly speaks about its safe character and Black’s possibilities for counterplay. GM Mihail Marin presents a complete Semi-Tarrasch repertoire for Black, explaining the main strategic ideas of the resulting structures.

Black’s chances are to be preferred slightly in view of the superior rook and bishop ending versus rook and knight, also referred to as the ‘Fischer ending’. The action on both wings means the bishop will exert greater pressure. However hardly anything is decided here and it was simply a remote chance that might have occurred. 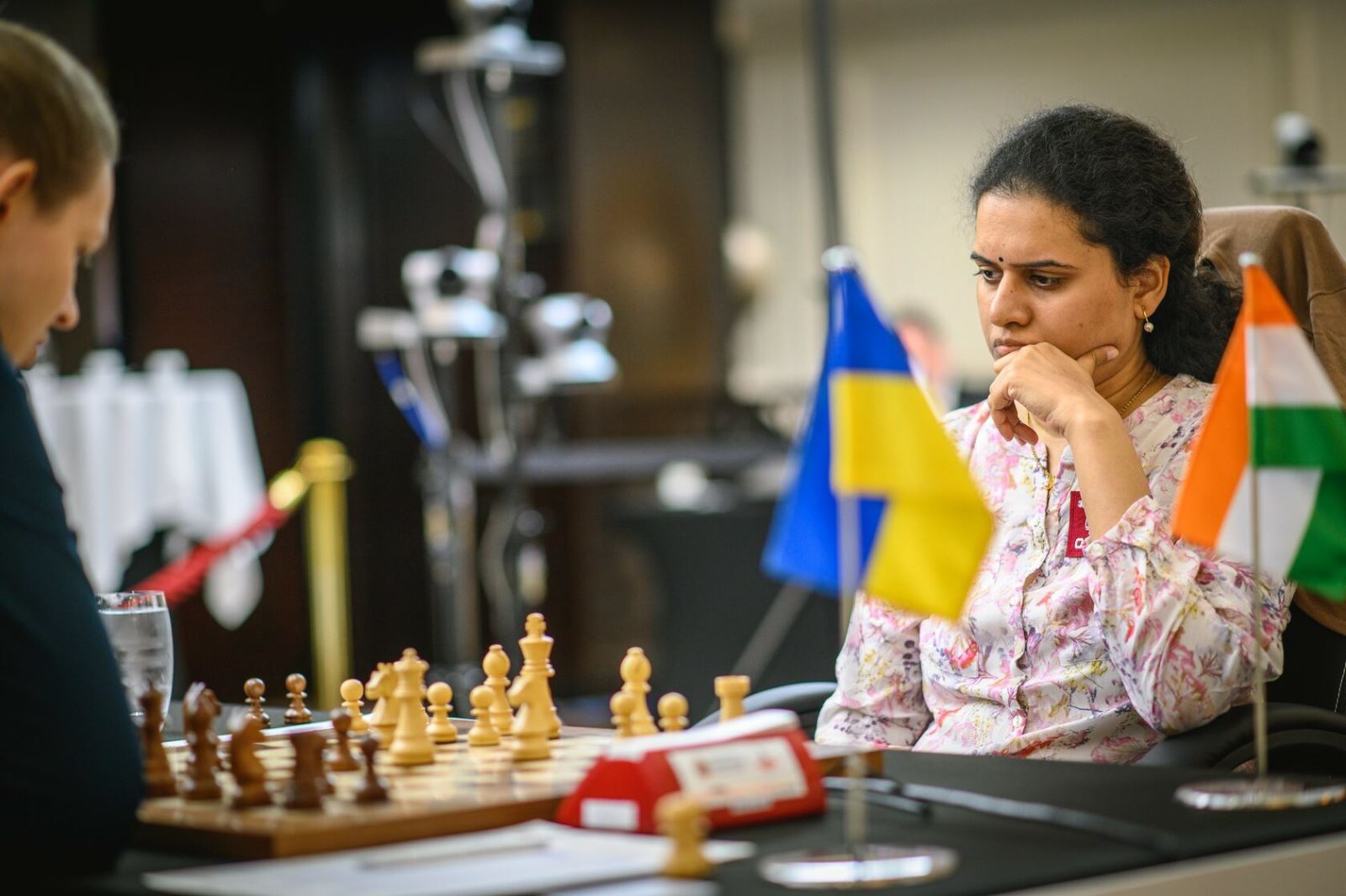 It was a very high quality performance by both players | Photo: Michal Walusza

Ultimately, they played on until move 42 in what was an otherwise flawless game by both players. 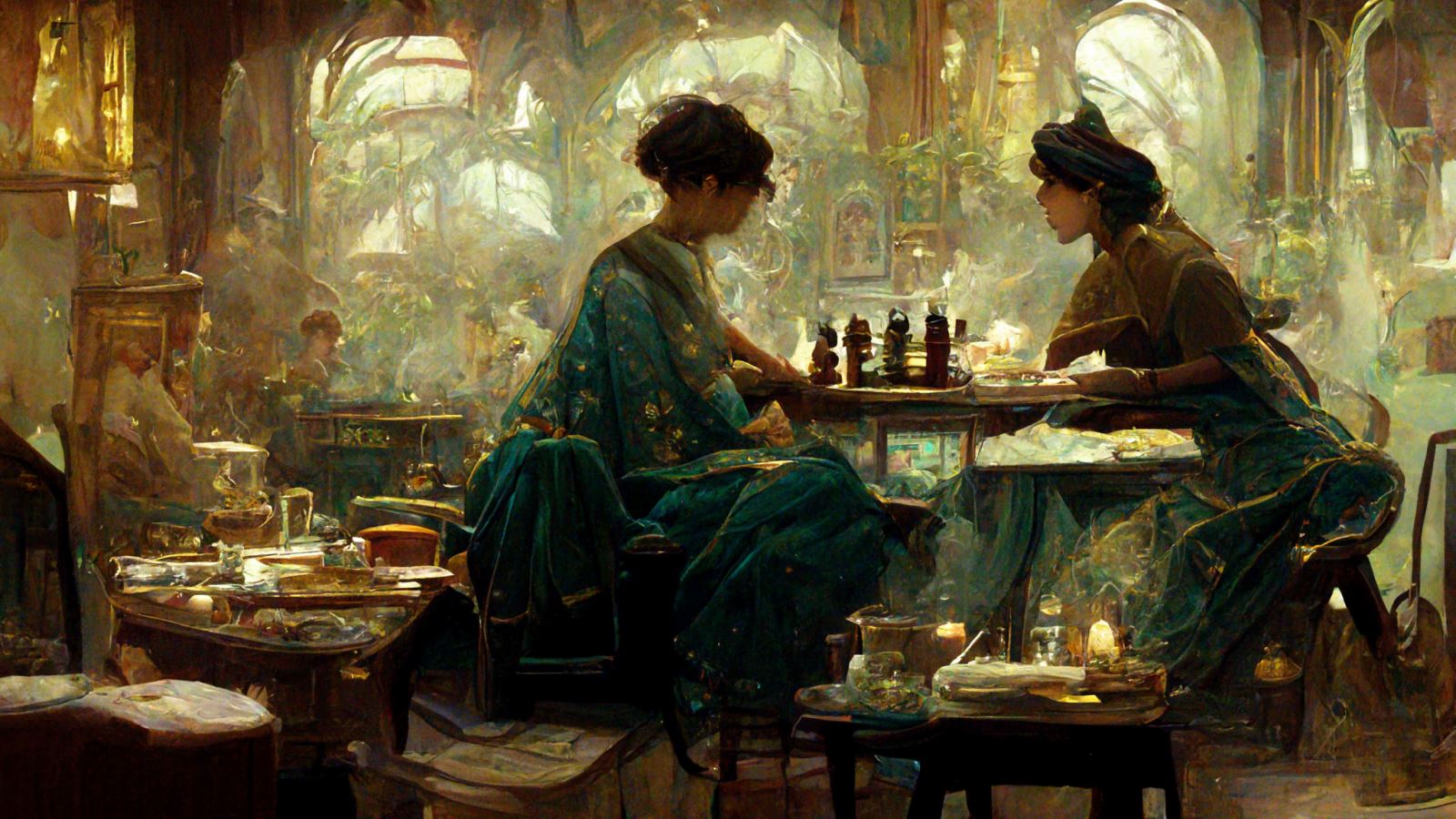 Women playing chess in a café by Alphonse Mucha MJ

Unless she is able to make more of her game tomorrow, this is a game that will cause no small amount of what-ifs in her mind down the road. The game was really all Lei Tingjie for a good 30 moves. After a botched opening for Black, White enjoyed a healthy advantage for most of the game, but some indecisiveness on how to try to build the pressure undid that goodness. 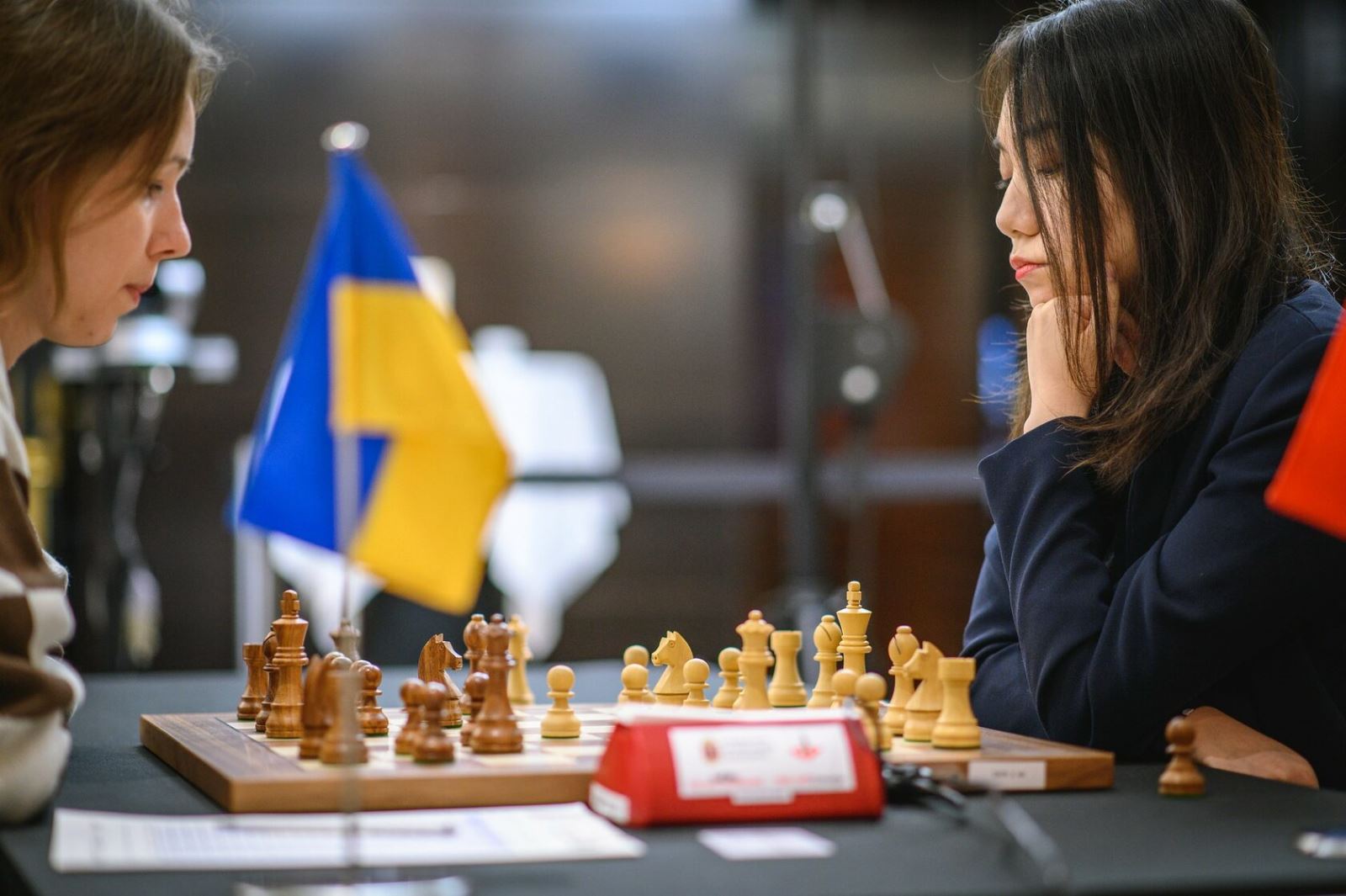 It was an incredibly exciting game for players and spectators | Photo: Michal Walusza

Forgetting Dvoretsky’s rule that a player must always strive to improve their position, White seemed to drift and by move 32 all things were equal. Then a moment of carelessness changed everything.

Stormy clouds appeared over White’s fate. Black is threatening …fxe3 followed by …Nh5 and …Ne7 and White’s combined shattered kingside pawns and vulnerable monarch spell doom. By the time the time control was reached, Black’s position had changed from threatening to dead won. The miss came after 43. Bb5

White is so tied down she is almost in zugzwang, though she is not irrecoverably lost yet. The engines will of course chant -4 and -5, but that is contingent on Black playing the winning continuations. The knight on f2 is still holding that h3 pawn afloat, the king is protecting the f3 pawn, and the rook on d1 is covering d4. Time to bring the knight c6 to a more multipronged role.

Instead Black underestimated her chances, or how easily her advantage might slip away, and after 43…Ke7? 44. Bxc6! bxc6 the most imminent danger was past and White was able to salvage the draw. 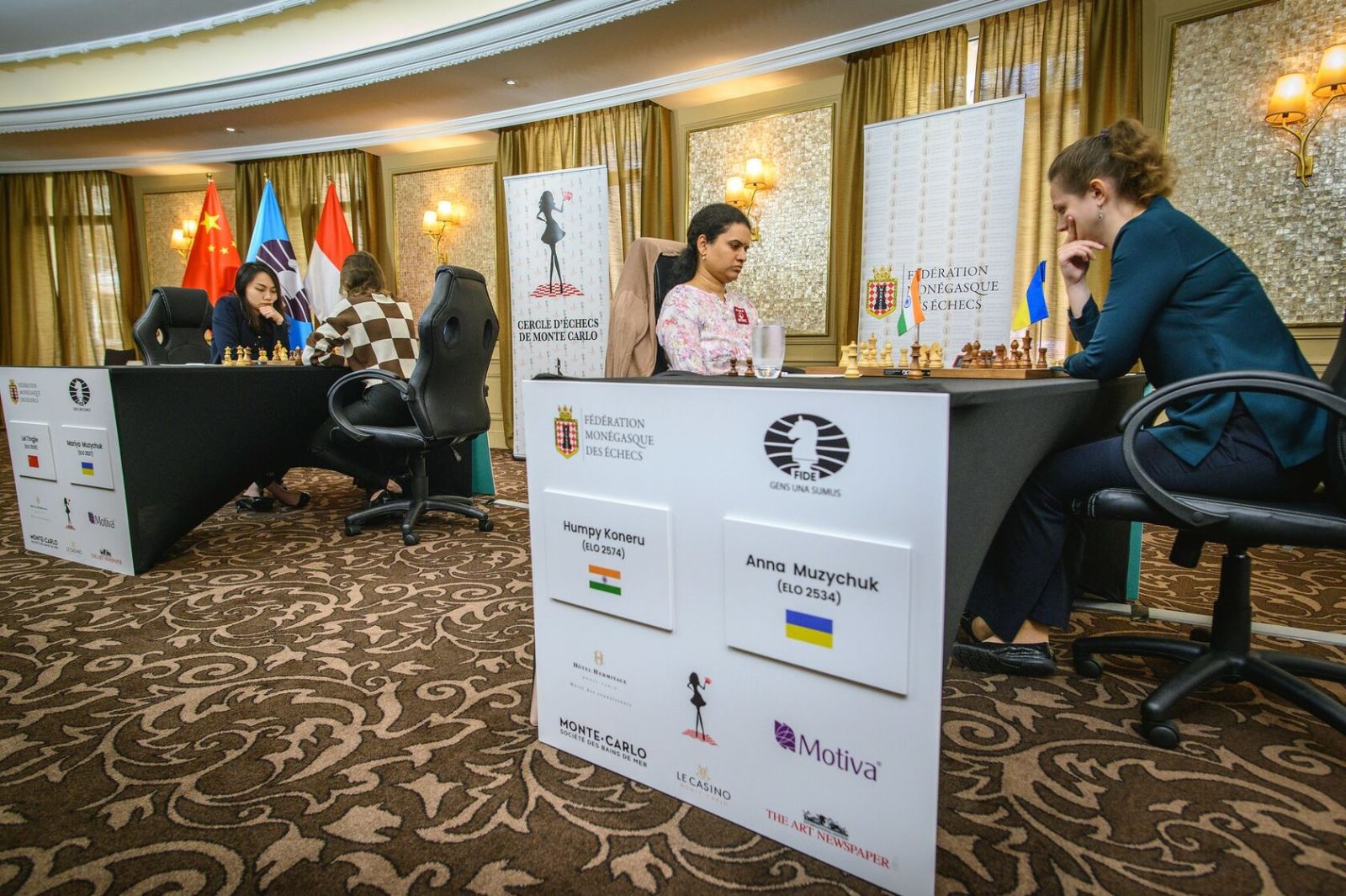 A 5-star round for the 5-star venue | Photo: Michal Walusza

Both Muzychuk sisters now face must-win situations or be eliminated from the cycle. It promises to be an exciting fourth game both for pure sporting considerations as well as the strategy they adopt to deal with this situation. There are more than one approach, and the best will depend on both the player’s character and their opponent.

The Longest Unbeaten Streaks in Boxing May Surprise You! ⋆ Boxing News 24

A busy month of February for UK boxing

Xi’an residents complain of food shortages as lockdown drags on