The Pioneers of Cheating in Chess


To be fair, there was no way to know that such a seemingly innocent incident would lead to a plague that has spread around the world, infecting players’ shoes, shirts, and even World Championship toilets. The main culprit has since dedicated a great portion of his life to combatting this pandemic. Who is this evildoer to make even Sauron blush? 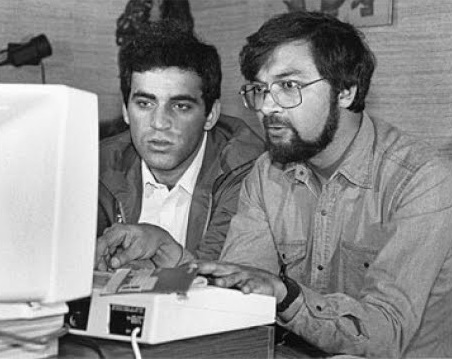 Garry Kasparov and Frederic Friedel in the summer of 1985

Yes, it is hard to believe, but it was the co-founder of the chess software company, ChessBase who was the mastermind of the first instance of cheating in chess. Actually, it was an experiment in a science documentary, a Turing Test to see if one can instantly identify a computer in a game of chess. The experiment was carried out with a like-minded partner, and this brings in the second player in the experiment.

Ken Thompson, the renowned computer scientist, had just finished his third and final version of the chess computer, Belle. It was a revolutionary development, since at the time consumer chess playing machines were weak amateurs at best. Even the large experimental projects running on mainframe computers of the time were no threat to master players, never mind grandmasters. 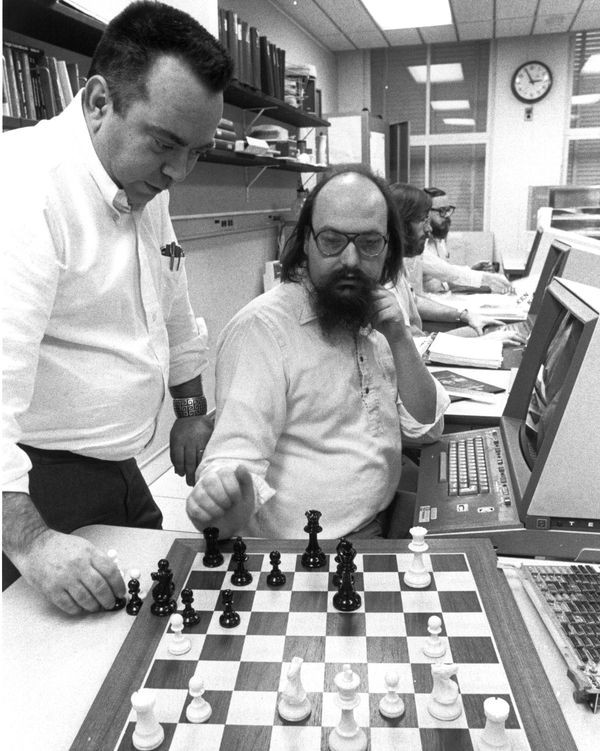 Ken Thompson (seated), the inventor of Unix, as he worked on Belle with James Condon.

Belle was in a league of its own. This machine, which contained dedicated hardware for its chess calculations, looked more like a small refrigerator, and would later serve as the inspiration for Chiptest, the precursor to Deep Thought and Deep Blue. 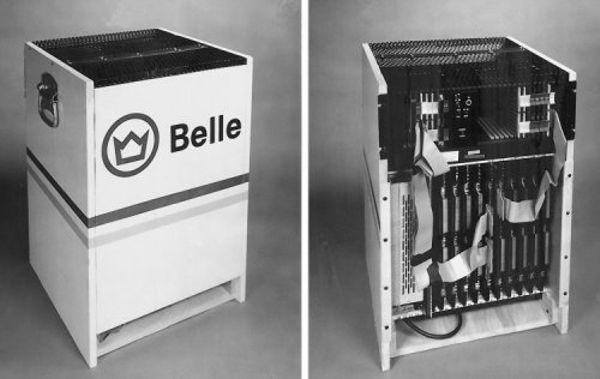 Belle’s skill was unprecedented for the time. It would later score 8.5/12 in the US Open, when machines were still allowed to compete in such events, and it became the first machine ever to be certified Master by the US Chess Federation.

The first time (to the best of my knowledge) that a computer was used to clandestinely help a human player during a game, occurred in Hamburg, Germany, in August 1980. Frederic was in the process of producing a second documentary on computer and chess for German television. Ken actually recorded the show, and we have extracted the part pertaining to the Turing Test. The documentary is in German, but we have embedded English subtitles, so you can understand what is being said. The victim of the prank was grandmaster Dr Helmut Pfleger, one of the most talented German players at the time.

This footage underwent some slight retouching to improve overall image quality, but is otherwise unchanged

Dr Pfleger was giving a simultaneous exhibition at the Hamburg Chess Festival, and Frederic decided to secretly play a computer against him. He hid a radio receiver under the hair of a young colleague, Dieter Steinwender, who was a participant in the simul. Dieter executed moves that Belle calculated. 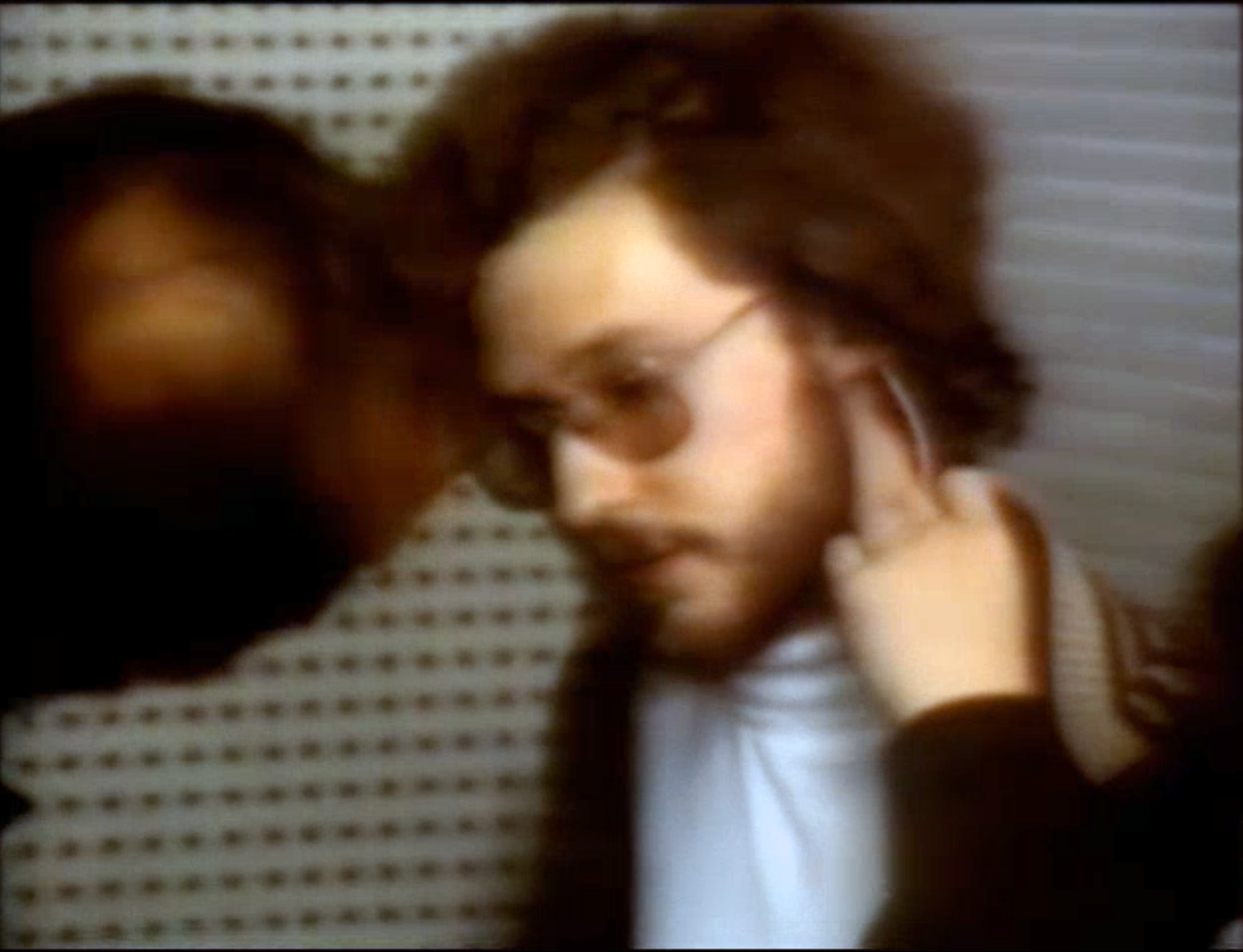 Frederic was able to talk to Dieter from a vantage point high above the tournament hall. Ken was standing by in New Jersey to deliver the moves by phone. 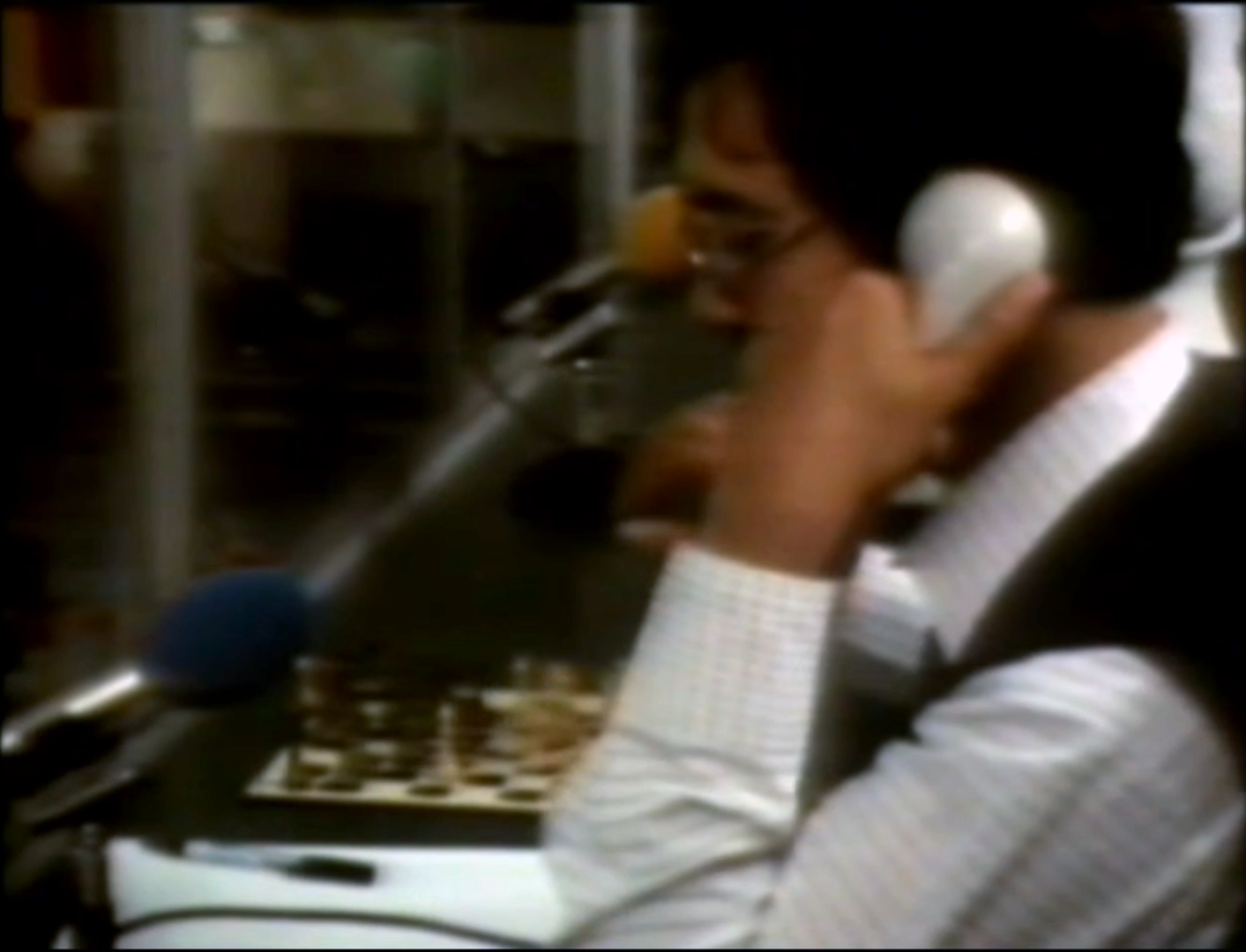 Using a pair of binoculars, Frederic followed the moves on Dieter’s board. As soon as the grandmaster made a move, he relayed it by phone to Ken, who entered it into the computer. 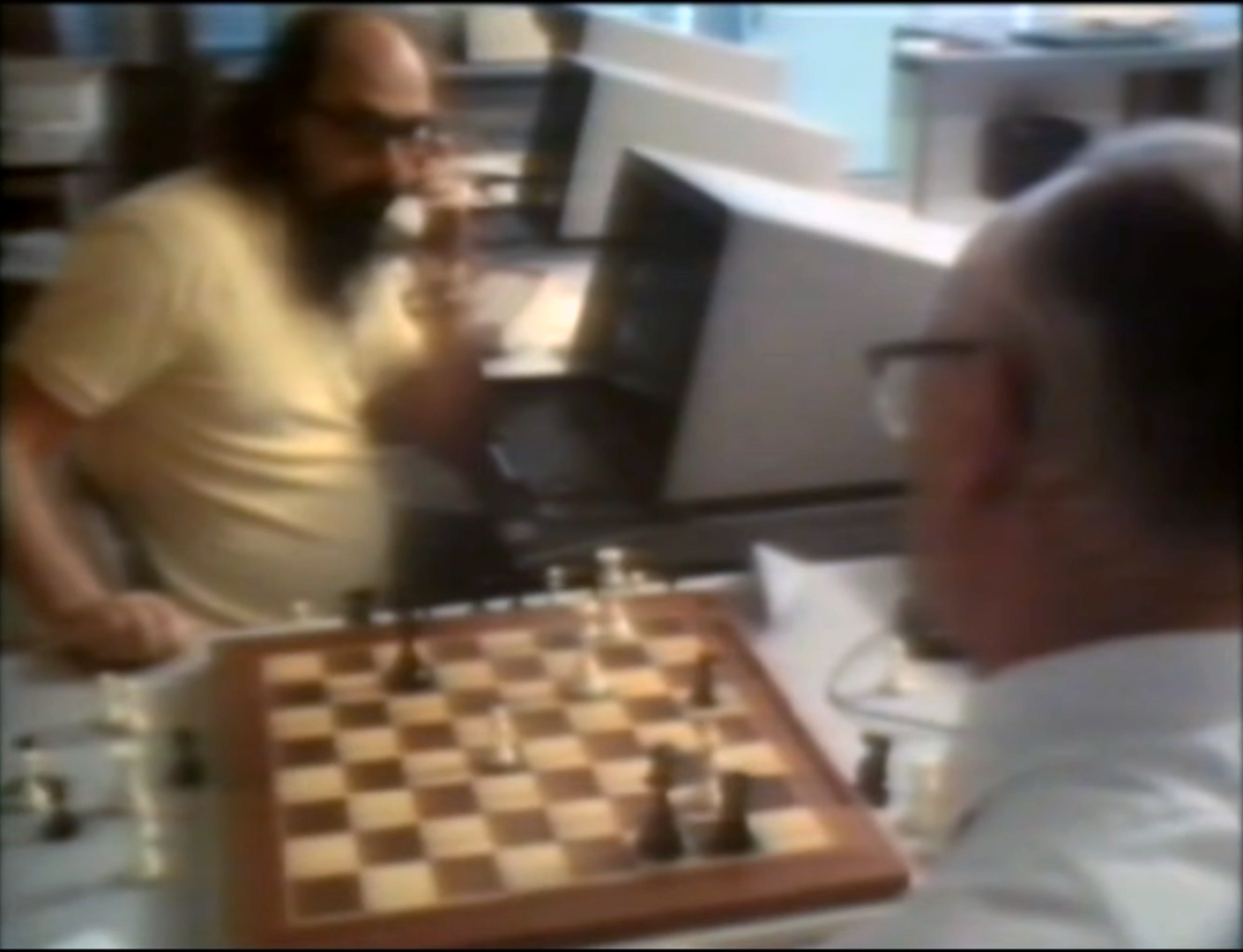 When Helmut approached the board again, Frederic would warn Ken, who would give him Belle’s current best move. This was then dictated by radio transmission to Dieter’s earphone, and he executed it as naturally as possible on the board. 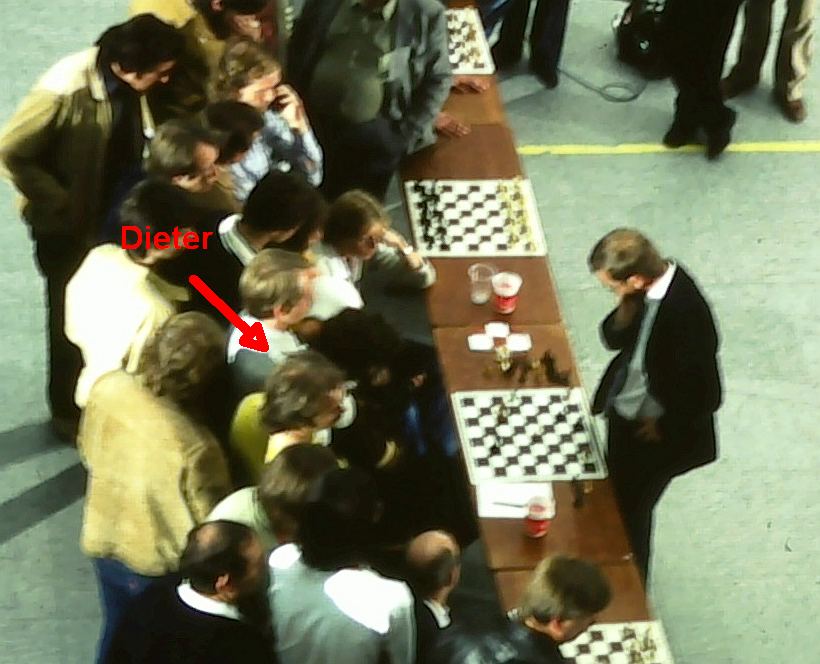 After some hours, Helmut Pfleger was winning all his games, including the one against Belle! However, at move 49 he missed a clear way to end it.

Immediately after the game the producers pointed a camera at Helmut Pfleger and asked him whether he had noticed anything unusual. Nothing. One of the games, they told him, had been played by a machine. Helmut was very surprised. “Which game was that?” He was amazed to hear it was the one he lost. “I really noticed nothing. Wow, these things are really playing quite well these days.” 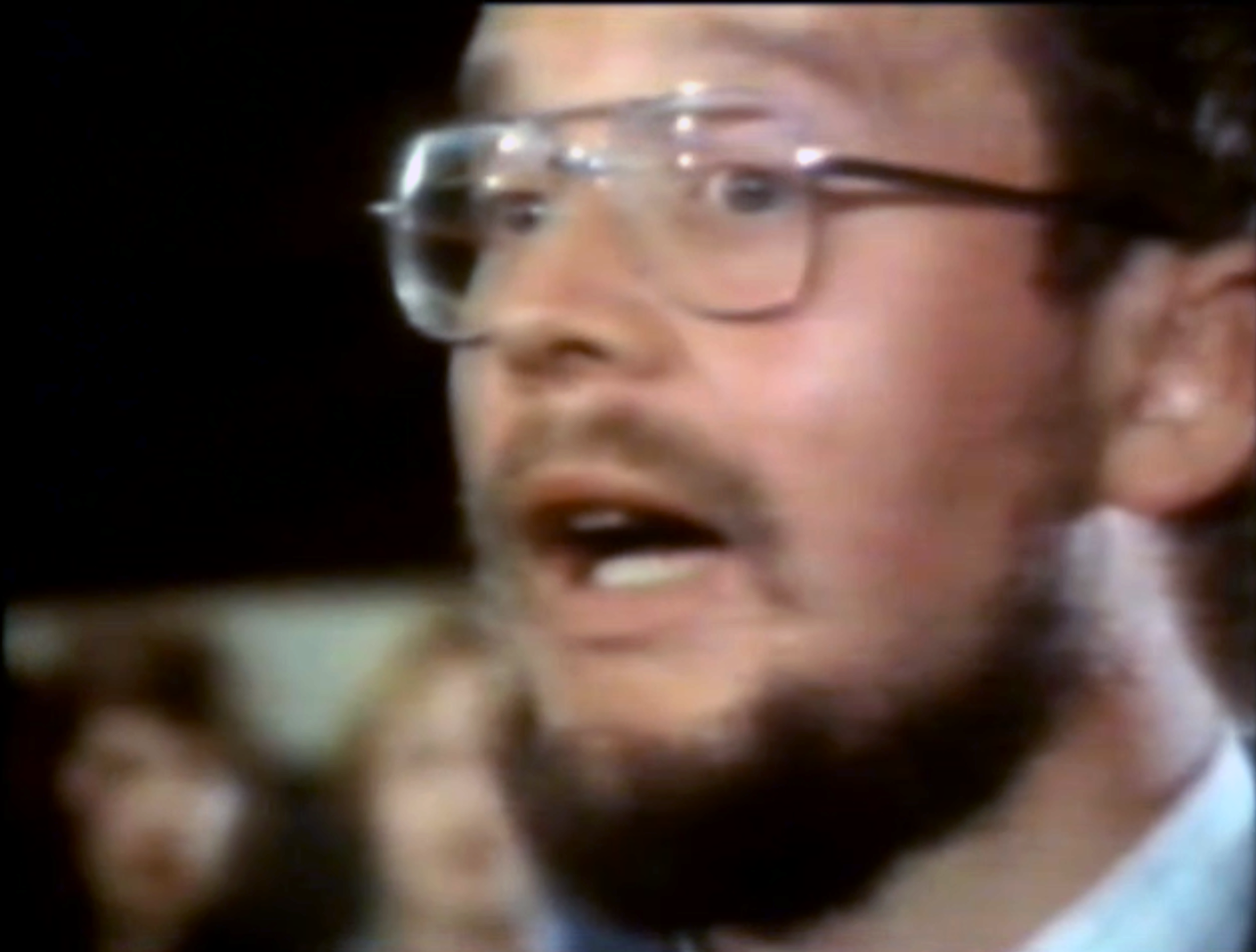 The sheer surprise: GM Pfleger is stunned that a mere machine could beat him.

The Friedel-Thompson-Belle game was of course not an example of cheating. It was an experiment in which the deception was immediately revealed. The same cannot be said about the later cases, in which the perpetrators tried to hide their activities as best they could.

Warmest thanks to Frederic Friedel for sharing the tale and footage, buried in history for so many decades. The footage is from a 1980 documentary on German TV in a series called ‘Bilder der Wissenschaft’ and was produced by Albrecht Fölsing and Frederic Friedel.