Let’s Check Engine Correlation: How to use it


The Let’s Check function started as a means to distribute computer analysis of games or positions to other users and not only get the feedback of one engine, but of as many as three. This was a ‘scratch my back and I’ll scratch yours’ process as you spent credits to get this, and earned credits by leaving your machine open for others to request the same from your computer.

Why use Let’s Check Engine Correlation?

Imagine you are analyzing with only Stockfish, and it says that five moves out of ten are not a match. This might overlook that two of the moves that don’t match its choices, are chosen by another top engine such as Komodo Dragon 3. In other words, only five match Stockfish, but seven in all match top engine choices. That is the underlying point of Let’s Check’s Engine Correlation. When you analyze a game with it, it will not only tell you what a variety of engines thought of each move, it will give you a summary called Engine Correlation at the top, showing the percentage of times a player’s moves matched the top choice of an engine.

However, unlike a plain engine comparison, it won’t compare with just one top engine move, it will compare with several, and if the move matches any of those engines, then it is a match for Engine Correlation.

If you have ChessBase 16 or later, then you can access the pure report with a full averaged summary from multiple games. To access it, highlight one or more games in a database and right-click, select Edit and then at the bottom of the list select Let’s Check Engine Correlation. 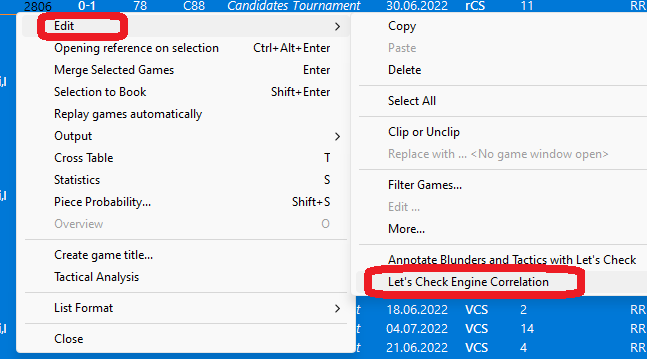 Regardless of the number of games, you will be given an overall performance of all the players. For example, after asking it to give a report on all the games and players from the 2022 Candidates Tournament. Nepomniachtchi had stomped through the field very impressively and the Engine Correlation agrees with this by showing how much better his standard of moves matched that of the best engines.

Be warned: It will not only ignore any annotations already in the game, but will erase them and replace them with the Let’s Check annotations. 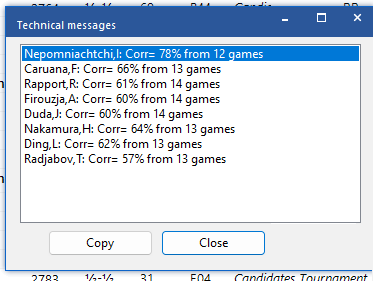 You will notice two things in the image above. The first is that Nepomniachtchi’s result was 12% higher than any of his rivals, which is a huge difference. The second is that although every player played 14 games, many have only 12 or 13 games reported.

The reason is that Let’s Check will ignore common theory moves, and the Engine Correlation will not be reported if the game had too few moves analyzed. Suppose a game was 28 moves long, but 20 moves of it were classified as theory, that means it only had eight moves to actually evaluate, which is too few for it to issue a report.

If we open a sample game we can see a report at the beginning.

If you are using any of the chess engines that use an updated version of the Fritz interface, such as Fritz 18, Fat Fritz 2, or Komodo Dragon 3, you have some advanced options open to you.

Accessing it is just a matter of having a game in front of you, then going to the Analysis menu and at the left select Let’s Check Analysis.

Unlike ChessBase 16, this will open a new pane with options. 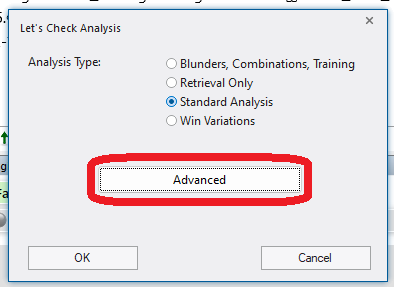 The first choice is Blunders, Combinations, Training, which will analyze it by searching for missed move so you can test yourself against them. The second is Retrieval Only and is to only consult the cloud for positions in the game that have already been analyzed by other users. This will already yield an Engine Correlation report if enough moves have been analyzed before.

Then we have the more interesting choice: Standard Analysis. The word standard isn’t usually the sort of word that is linked to ‘interesting’, but you will see why. 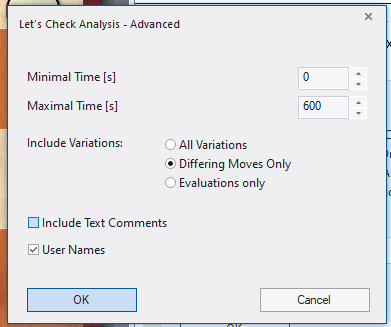 Now we have a number of options to play around with. The key to understand here is this: now when you are accessing the Let’s Check moves, you will also be using your engine to contribute further analyses. For example, if you select Differing Moves Only, then every time a move in the game was not chosen by other engines, it will analyze with your engine and add the results to the database. This will happen even if the result is in agreement with the other engines.

As mentioned in a previous article, the top players are quite capable of achieving 100% matches or multiple results with 90% or better results. And even a much weaker player can occasionally achieve a high match, so don’t read too much into a few isolated high results. I submit one of my own games played some years back:

As you can see, I achieved a match rate of 86%, and yet it means very little other than I was having a very good day that time.

There are those who say that this sort of result does not mean the player was playing better, but that they were simply playing more engine moves. However, I submit to you that if the engines are all 1000 Elo or better than us, then finding the same moves would almost certainly indicate you also made moves that are far closer to perfect than not.