On the 27th of the last month, we published a detailed article on Judit Polgar’s Global Chess Festival, presenting brief accounts of the event’s leading themes this year and introducing “Chess Artistry Adventure,” the creative tribute program for the late chess great Pal Benko. The latter also included a detailed explanation of four original studies. However, this was only the hors d’oeuvre, if you will. And it is time now to serve out the entrée.

The first study we will look at is a coproduction of two over-the-board International Masters: Valeriy Grinev and Igor Yarmanov. Both Ukrainian, Grinev is a reputed chess coach based in Kyiv, while Yarmonov is a multiple-time world champion among chess players with physical disabilities or limited motor skills and is best known for his excellent results at various events of the International Physically Disabled Chess Association (IPCA). However, of the two, the latter is the more regular composer—with more than 250 published compositions and a FIDE Master title in the discipline to his credit, he is undoubtedly one of the most prominent figures in Ukraine’s chess composing scene. Yarmonov’s talent, moreover, is not limited to studies. He also constructs helpmates and directmates with equal mastery, and has won distinctions in these genres too. Grinev, on the other hand, excels more in the practical side of the game. His successes include winning the Nakhichevan Open 2017, Bonn Open 2019, and most recently, the Ukrainian Independence Cup that took place this year earlier in August. 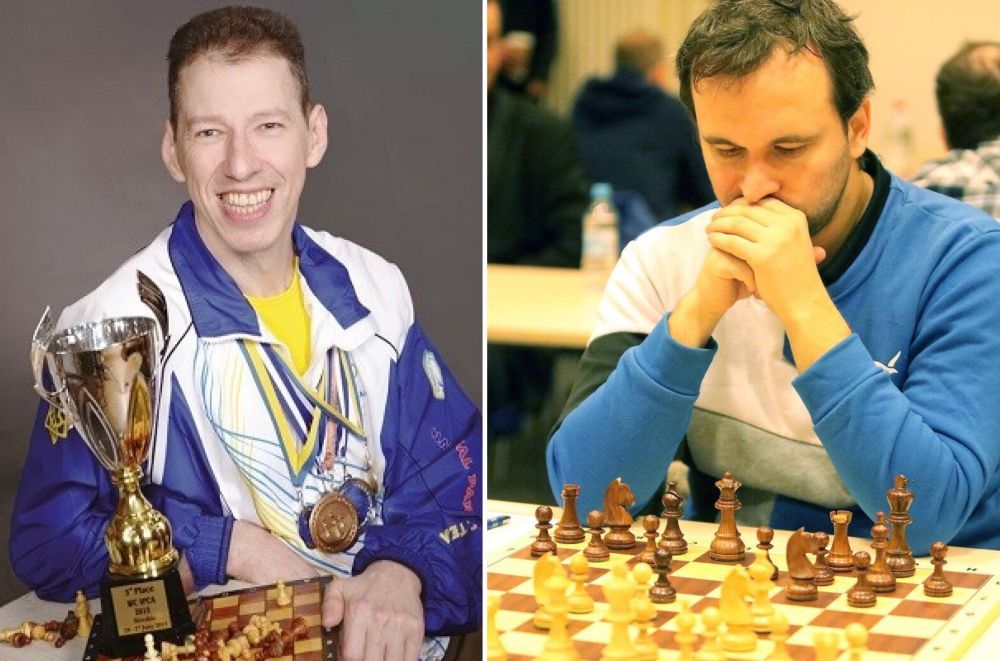 This study is perhaps the least head-breaking of the ones we will see in the rest of the article. However, there are still subtle tactical points that a strong player might miss. But overall, the solution has a natural flow, culminating in a picturesque checkmate. Therefore, we think it would be a good exercise to figure it out.

Sweet finish! Who needs a queen when you have such agile minor pieces!

Sweet finish! Who needs a queen when you have such agile minor pieces!

This study was inspired from the above position that arose in a game between Malakhatko and Kholmov. Black has just played 45…Qc3, we don’t need to spell out what happens if the queen is taken, do we?

There are such ideas in chess, such tacts, that do not lose vitality or become hackneyed even after generations of use and reuse. Time, as it were, has little to no effect on them. Take a Ruy Lopez or a Giuoco Piano, for instance, in the realm of opening theory. These openings are centuries old, yet they remain pretty undiminished in their appeal. Piles of analyses by generations of chess players, in recent times also aided by computers and AIs, have, if anything, only added to their dynamism and revealed more of their intrinsic strength.

In chess composition, too, timeless ideas like these aren’t uncommon. Take the Saavedra position, for example. Originating around the middle of the 19th century, this simple but striking idea of underpromotion spurred on composers like Mark Liburkin and Harold Lommer for decades. An even better example would be the Indian problem, originating in a letter to Howard Staunton by a cleric living in India, this idea led to the development of a whole new style of composing.

Our next study is interesting because it shows something of the process of how an old idea evolves through time. The story starts with the position below to the left. This is a matrix that was conceived by Berthold Lasker, the elder brother of the 2nd World Chess Champion Emanuel Lasker, in 1890. It is White to play and win, and the solution starts with the simple 1.Bg8, threatening Qh7#, and we get this nice sequence: 2.Kf7 Rxg6 3.fxg6 c1=Q 4.g7+ Kh7 5.g8=Q# 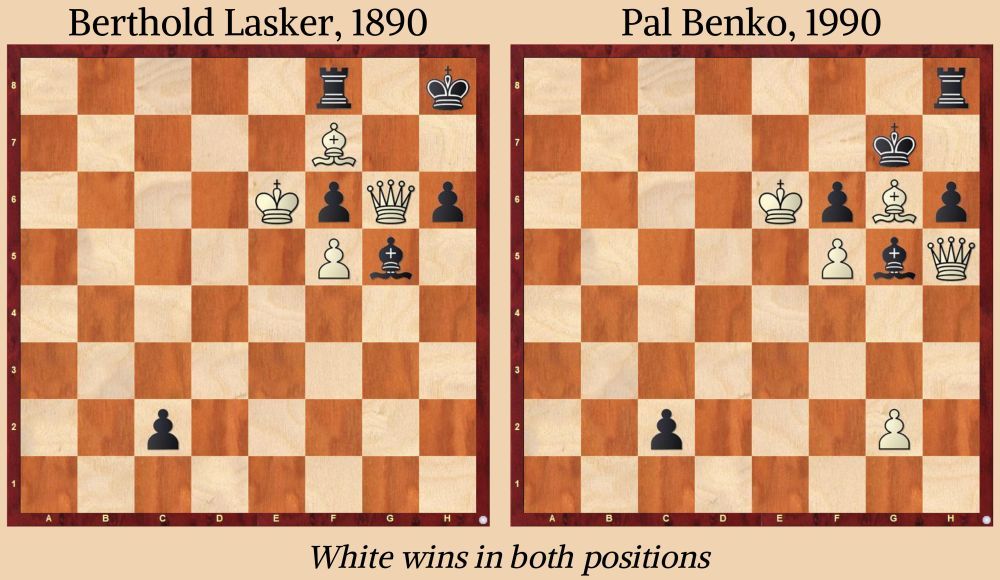 Exactly 100 years later, in 1990, Pal Benko saw potential in this little idea and played around with the position to add a short intro-play to it (diagram above to the right), making the solution a bit more involved: 1.Bh7 Rf8 2.Qg6+ Kh8 3.Bg8! Rxg8 4.Kf7! Rxg6 5.fxg6 c1=Q 6.g7+ Kh7 7.g8=Q# 1-0. But this still doesn’t look like, at least by modern standards, a full-grown study worthy of attention, does it? Now fast-forward 32 more years, and in comes the Czech composer Jaroslav Polasek to raise the sophistication a few notches. 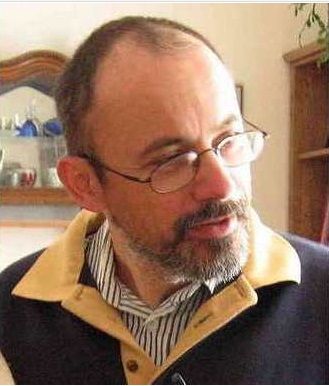 Jaroslav Polasek has composed more than 120 studies and is an International Judge of the FIDE for chess composition since 2012 | Photo: arves.org

The struggle between a queen and pawns vying to become queens on an open board has a tense, mouth-watering quality. Our next two compositions—based on a game between Anna Muzychuk and Bartosz Soćko played in Antwerp, in 2009—have to offer some of the best “queen against passed pawns” skirmishes that you’ll ever see. But before we get into the positions, a few words about the composers: Pavel Arestov and Serhiy Didukh.

Pavel Arestov is a 56-year-old study composer from Russia. He has composed more than 360 studies and has been an International Master of chess composition since 2012. In 2013-15, he also won the bronze medal at the World Championship of Chess Composition for Individuals (WCCI). Serhiy Didukh is a relatively young composer from Ukraine who has already made his mark among the elites of the study community in a big way. His deep and ambitious creations won him the silver medal at the WCCI in 2007-09 and then the gold in 2010-12. 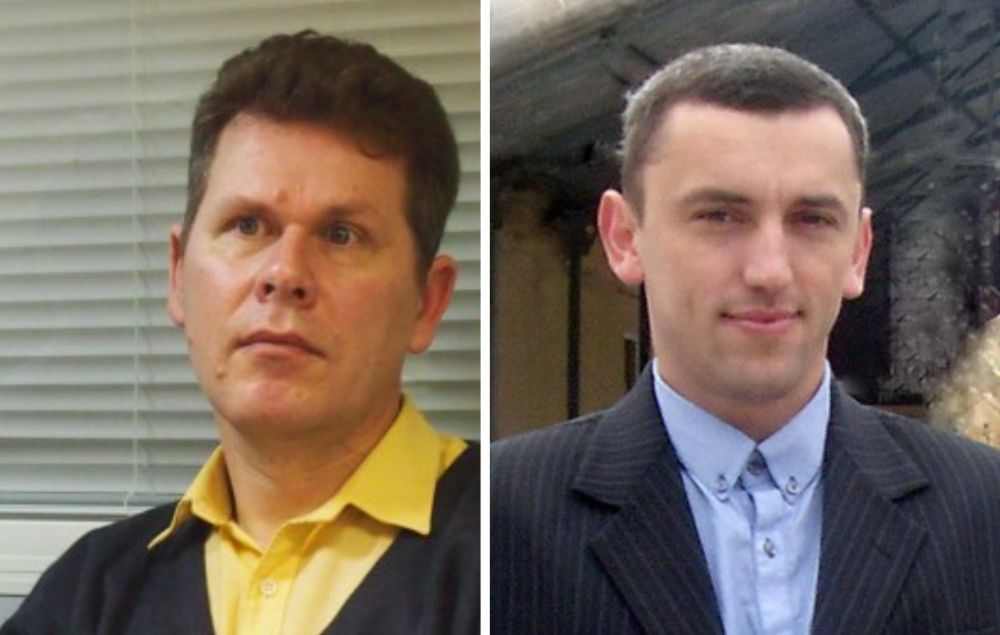 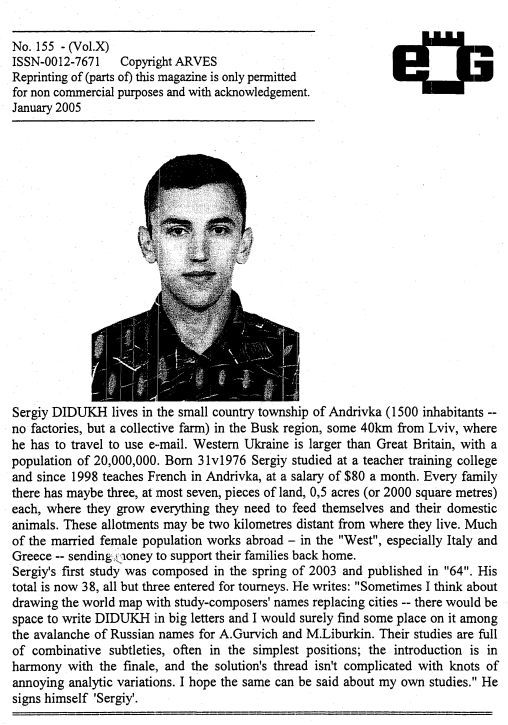 More on Didukh – a snippet from an old edition of EG

Now let’s get into the first study by Arestov, the easier of the two, that was published back in 2016. The armada of passers seems enough to counter the black queen, but careful, after …Qe8+, the white king has a tightrope to walk on!

How does White hold fort here?

Yes, hope you spotted that correctly, it is 12.f8=Q d1=Q and 13.Qf3+!! Qxf3, forcing a stalemate. Amazing! How often does one come across a stalemate brought about by two queens? You can replay the whole study below:

If the above study was cute, the next one is profound and characteristic of Didukh’s style and penchant for the ambitious.

But the moment of truth is already upon us. What should White play in the above position? There are really only two candidate moves: 8.a3 and 8.d5. One of them draws and the other loses, and the reason why is exceptionally hard to see. The logical point of difference is revealed not unless you analyse 14-15 moves deep into each of the variations. We try to explain this in rough outlines with the next two diagrams. You can always check out the concrete variations by replaying the PGN attached at the end of the write-up.

As 8.d5 forces the pawn push a4-a3 from Black immediately, we can see that at the end of the line above, the a3 square is occupied and there’s no Qa3+ anymore. This essentially creates all the difference. Of course, this is only a broad understanding of what this monster of a composition is all about. The idea is fantastically deep and solving this from start to end is well nigh impossible. However, studying and understanding it is certainly not beyond the abilities of an average chess player, and an effort towards that will also no doubt have its reward. Be sure to go through the detailed annotation below to understand all the nuances clearly.

Now let’s get back to things that are more concrete and tactical. The fifth study of this article is a production by three Nordic composers: Steffen Slumstrup Nielsen and Poul Rewitz from Denmark, and Geir Sune Tallaksen Ostmoe, from Norway.

Steffen Nielsen needs little in the way of introduction. Following the declaration of the results of WCCI 2019-21 this year, he is the current World Champion of study composition, besting the all-time great and former bearer of the world title Oleg Pervakov. Nielsen’s body of work is sharply contrasted with the deep, logical masterpiece by Didukh that we have just seen. His forte lies in combining tactical themes—sacrifices, pins, unpins, interferences, you name it—to effects that are startling and visually potent. To know more about him, check out this mammoth article from 2020 that contains a collection of his best works and also a comprehensive interview.

Geir Sune Tallaksen Ostmoe is a strong over-the-board IM of composing from Norway. Those who diligently keep abreast of chess news might recall that not too long ago, he made headlines for holding Magnus Carlsen to a draw at the Norwegian chess league. However, Geir is also a gifted study composer, steadily rising through the ranks. This year he has fulfilled all the qualifications needed for a FIDE Master title in composing.

Poul Rewitz was an active study composer during the early 90s, perhaps the only one from Denmark with an interest in the field, but didn’t compose much thereafter for many years. Lately, spurred on by his fellow compatriot Steffen Nielsen’s successes, he seems to have resuscitated his old hobby. Rewitz is also a strong chess player and has twice won the subgroup at the Danish Championship, in 2017 and in 2020, and thrice the senior Danish Championship in the 50+ age group, in 2019, 2020 and 2021. Rewitz’s strength as a constructionist is well reflected in the following study we had shared on ChessBase India Twitter.

Denmark’s Poul Rewitz seems to have been an active study composer during the early 90s and has gone defunct since. But this old creation of his came up at the British Online Solving held last year, and we totally loved it. So, whatcha gonna do with those renegade black pawns? 🙂 pic.twitter.com/Bs7SO7QmyQ

Although the crowded board position in this one might strike some as intimidating, to get a handle on the matter and crack the first few moves, all one needs to do is carefully observe the placement of Black’s king. Standing all exposed on g7, it is an open target for White to pursue, indicating what the start of the solution should be.

Solution: 1. Nh5+ Kh8 2. Qxe4 Qb8! All forced so far. Black’s king hides on h8, the only place where it has any hope to evade an immediate kill, and his queen comes to the aid, defending the eighth rank and preparing to meet further incursions with Qg6, Qe6, etc. So the ball now is in White’s court. How does he make progress?

What’s the next step in the plan? How to go after the black king?

3…Qxd6!? Black is now hoping to create counter play exploiting White’s weak back rank. However, White has a devious idea up his sleeve. 4.Ba4! c2!? 5.Bxc2 Bd3, and here comes the main idea of the study:

Hope you haven’t missed this move, the crème de la crème of the solution: 6.Ra6!! White has all three of his key pieces—the queen, bishop and rook—en prise, but what sheer miracle, he is still winning! We leave the details of what happens after each capture for you to figure out from the PGN attached below.

If you haven’t guessed already, this study was inspired by the classic Mikenas versus Bronstein encounter from the USSR Championship 1995, which ended in the position above with the famous move 24…Rxa3! Of course, the study is way more spectacular than the game finale it is fashioned after, but this is how it is supposed to be. To paraphrase Dr Milan Vukcevich, a composition differs from a practical game in intensity, often combining a dozen separate elements into one extraordinary event, akin to how a good novel may condense a dozen real lives into a single lifetime of its fictitious hero!

That’s all for this article. In the third and final installment of this series we will present the remaining of the fourteen originals, along with an account of how some of the top OTB Grandmasters faired at solving them.