The chess world was revolutionized during the pandemic. Due to the travel restrictions, online tournaments gained relevance even among the best players in the world. One of the biggest online initiatives was taken up by the Play Magnus Group with their Magnus Carlsen Chess Tour, which kicked off on 18 April 2020. Two and a half years later, the tour’s third edition is coming to a close, and a familiar name has already secured a third title in a row.

Magnus Carlsen won the inaugural edition, which bore his name, after claiming wins in 4 out of the 5 tournaments that were organized. In the second edition, the series was renamed as the Meltwater Champions Chess Tour, and Carlsen again prevailed after grabbing first places in 4 out of the 10 events.

Now, in a series consisting of 9 tournaments (6 regulars and 3 majors), the world champion remarkably secured first place with a tournament to spare, after winning 4 out of the 7 events that have already been played and reaching the semifinals of the tour’s eighth competition.

Carlsen won the tour — and thus an extra $50,000 — after beating Arjun Erigaisi by a 2½-½ score in the quarterfinals of the Aimchess Rapid. The match score by no means tells the whole story, though, as Arjun was inches away from getting ahead on the scoreboard in the first game. The frustration provoked by failing to convert a clearly winning position apparently unsettled the Indian prodigy, who went on to lose two games in a row.

In the semifinals, Carlsen will face Jan-Krzysztof Duda. Duda stands in clear second place in the overall tour rankings, and reached the semis after defeating Vidit Gujrathi, also by a 2½-½ score. The other matchup on Wendesday will see Shakhriyar Mamedyarov facing Richard Rapport. Shakh knocked out world rapid champion Nodirbek Abdusattorov, while Rapport got the better of Gukesh Dommaraju. 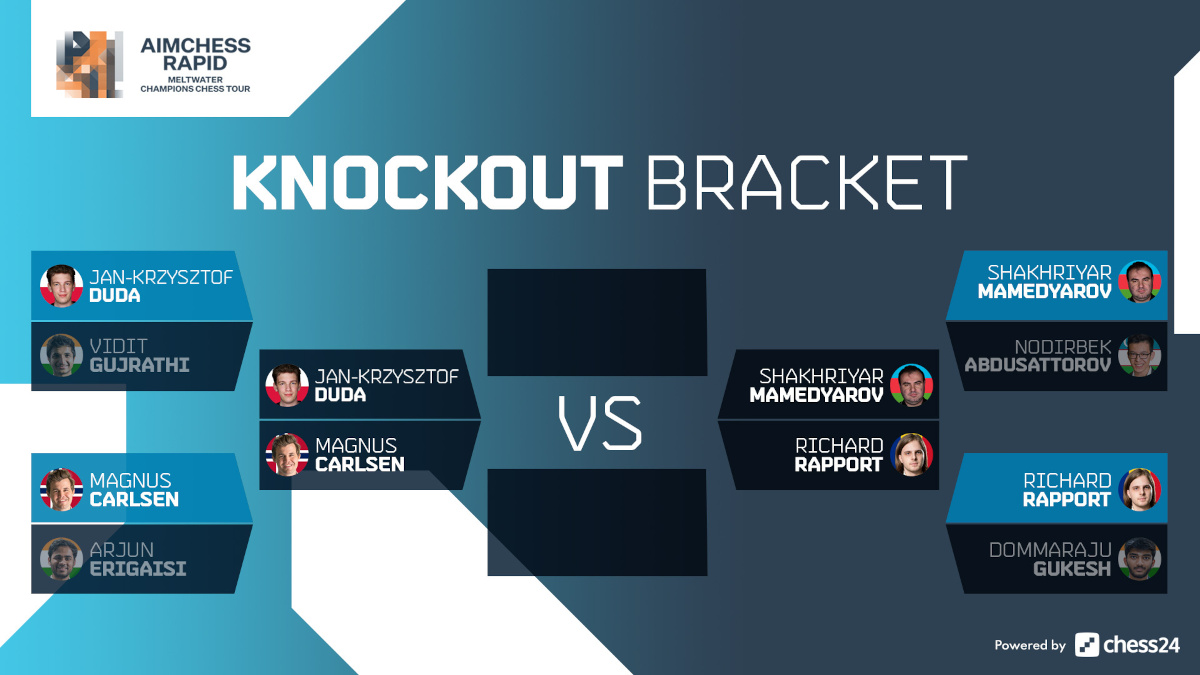 The first game of this match all but determined the final result, as Arjun completely outplayed his famed opponent but failed to convert his clear advantage into a win — at multiple times.

The game continued 36…Ba3 37.c5 Bc1 38.Rb1 Ka3 as Arjun continued to find the most trying attacking continuations.

White can choose between capturing the bishop on c1 or the pawn on e5, and Arjun chose the latter, keeping as much control over the position as possible while preventing Black’s a-pawn from marching down the board. This is not a mistake per se, but keeping the bishop alive ended up giving Carlsen more chances to muddy the waters in the long run.

Notwithstanding this decision, Arjun managed to enter an ending with rook, knight and two extra pawns (on the f and h-file) against Carlsen’s rook and bishop. The endgame was clearly winning, and the world champion was visibly upset with his position. However, Carlsen continued playing, looking to get his bishop to the long, dark-squared diagonal.

Arjun’s final mistake came on move 76. The Indian, frustrated by the chances he had missed, continued playing in a rook and knight against rook ending until move 136, when a draw by repetition was finally reached.

Much like in the aforementioned match, Duda’s win was not as clear as the final score shows. The Polish grandmaster, in fact, later noted:

I think it was unexpected that I won the match in three games.

Duda has proven to be a tough rival for Carlsen, whom he will face in the semifinals. The man from Wieliczka defeated the world champion at the FTX Crypto Cup in August. Before that, he ended Carlsen’s unbeaten streak of 125 classical games in October 2020, and knocked the Norwegian out of the 2021 World Cup in Sochi.

In a close match, Mamedyarov’s win in the first game proved to be enough to knock out his young opponent. Three fighting draws followed, giving Shakh a ticket to the semifinals.

The Azerbaijani, playing black, converted the following rook endgame into a win.

White needed to play actively here, either with 50.Re5 or even 50.Re3, to keep the balance in the position. Instead, Abdusattorov’s 50.Rb2 allowed Black to decisively activate his king via 50…e5 51.fxe5 Kxe5. Mamedyarov converted his advantage into a 69-move win.

This was the only match that saw both players scoring at least one victory. Gukesh was the first one to strike, but back-to-back wins in games 3 and 4 allowed Rapport to move on to the next stage of the knockout.

Rapport, who now represents Romania, converted an endgame with rook and bishop against rook in the fourth game to secure match victory. The technical ending had been drawn until move 155 (!), when Gukesh finally cracked and allowed Rapport to demonstrate the winning technique in the oft-seen setup.

I’m playing miserable chess, so I was really looking forward to Gukesh putting me out of my misery tonight.

Filipino Bakers on TikTok Who Create the Prettiest Desserts

“Call For Unified Nation Is Stronger”

Ime Udoka Following Sweep of Nets: ‘We’re Not Scared of Anybody’