One of a kind

Elshan Moradiabadi’s woes continue in Saint Louis, as he lost a seventh game (out of ten) on Saturday. Hans Niemann beat him with black out of a King’s Indian Defence. This was Niemann’s second win of the event, after he beat Christopher Yoo with white on opening day.

The eccentric Californian later spoke with Cristian Chirila, and confessed that he had entered the game with a fighting mindset — “I decided that today I’m going to lose or I’m going to win, there’s no in-between”. Niemann played quickly, putting a lot of pressure on the clock on his opponent. The youngster thus described his approach:

To be honest, I did not check a single variation of the King’s Indian, but I had already decided that I was going to, you know, freestyle a bit. I felt I needed to go back to my roots of playing just absolutely psychotic chess. Because I don’t know what’s gotten into me, you know, playing the Berlin and trying to make draws.

Niemann grabbed the initiative on the kingside following Black’s somewhat timid play early on. He would later give up most of his advantage, but a final mistake by Moradiabadi allowed for a nice final move that sealed the game for White. 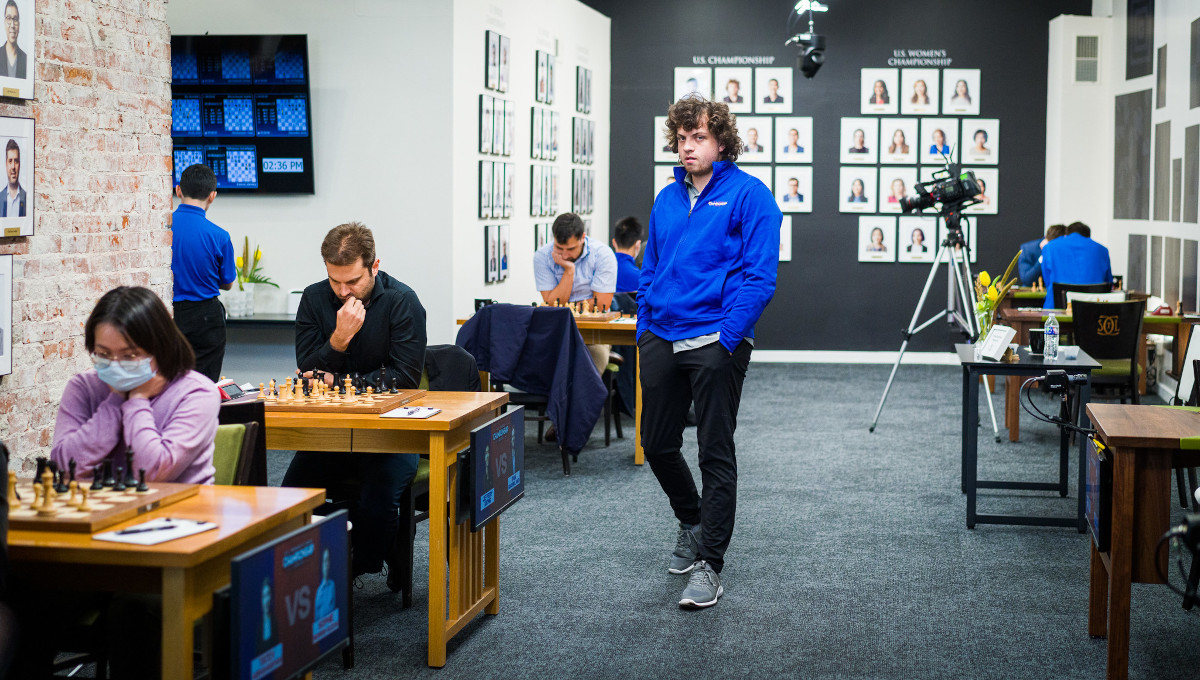 As confident as ever — Hans Niemann taking a stroll | Photo: Lennart Ootes

All remaining games in the open finished drawn. Fabiano Caruana thus continues in the lead. The second seed became the sole leader after round 4, and has not relinquished that spot since. With three rounds to go, he stands a half point ahead of Ray Robson and 1½ points ahead of a 5-player pack sitting on +1.

Both Caruana and Robson will play two out of their three remaining games with the white pieces. The contenders for first place drew their direct encounter in the second round. 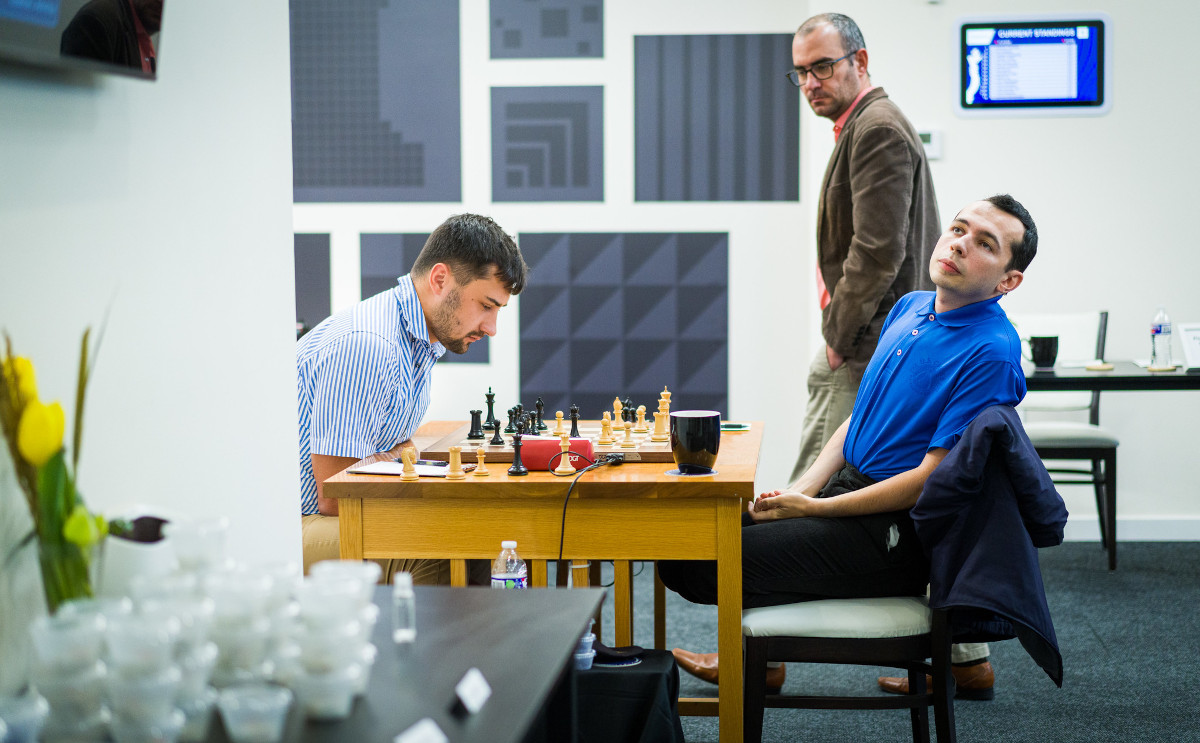 Two players quietly made their way to shared third place in the women’s event. Thalia Cervantes and Gulrukhbegim Tokhirjonova both scored back-to-back wins on Friday and Saturday to join the 4-player pack standing a full point behind sole leader Jennifer Yu and a half point behind second-placed Irina Krush.

Much like Niemann, Tokhirjonova got to play a rather unexpected winning move with the black pieces. She was facing streaky Ashritha Eswaran.

48…Nf2 is a nice tactical shot, making use of the fact that 49.Kxf2 would fail to 49…Rxe4. White had nothing better than 49.Rxd6 Rxd6 50.Nxd6 and Black continued to make progress from a clearly superior position after 50…Rd7.

A smiling Tokhirjonova later told Cristian Chirila — who is also her coach — that she had foreseen this beautiful shot when she entered this variation. 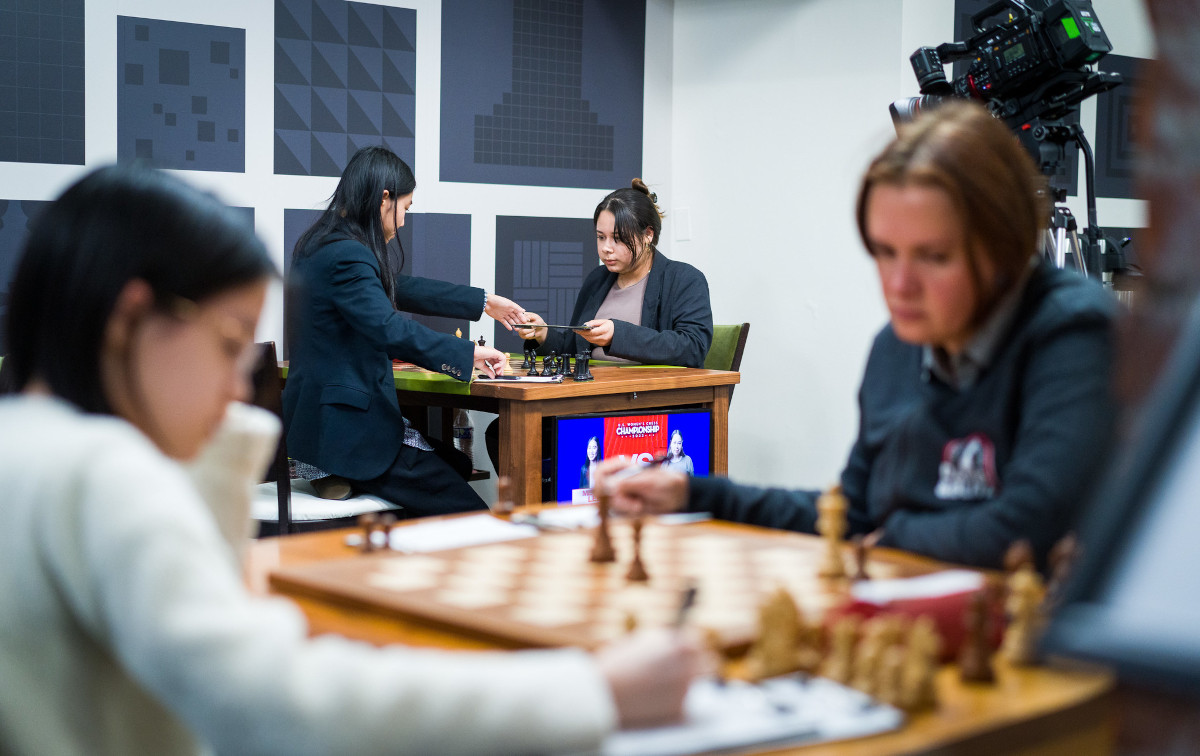 For the first time in the women’s tournament, we saw fewer than three decisive results in a single round, as fatigue is surely becoming more of a factor going forward. These results left Jennifer Yu in the lead with 7 points and 8-time U.S. women’s champion Irina Krush as her closest chaser on 6½.

Unlike in the open, the two frontrunners have not yet faced each other in the women’s, as Yu will play Krush with the white pieces in Tuesday’s twelfth round.

The Saint Louis Chess Club uploaded a nice video in which the participants of the women’s championship shared their pre-tournament expectations.