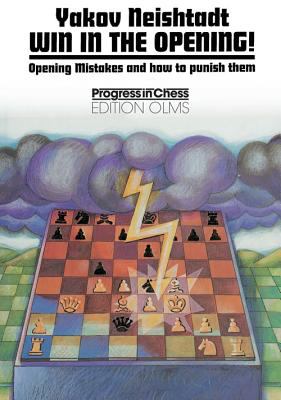 The opening debacle in the U.S. Championship last week put me in mind of more of the same. When I was a kid, I had a small hardback book of opening traps with a lightish blue cover by Al Horowicz which I tried to find on my shelves but without success. I did locate it fairly quickly though on a site called AbeBooks.co.uk. And in fact it’s called New Traps in the Chess Opening (Faber & Faber 1966) and the dust cover is a slightly darker blue than it was in my mind’s eye.

I’m sure it’ll turn up eventually, but I did in my search find another rather more serious book of opening disasters, which I’ve been browsing through for today’s column: Win in the Opening by Yakov Neishtadt. It seemed churlish to use too much of his material, so I had a glance at my database of my own games and added a few of them too.

I put them all in the .pgn and have got them as diagrams to solve here (with the numbers corresponding to the games in the database). Of course, I did also remember to give the solution of the proof game I left you with last week. Well done for anybody who solved it or held out until now for the solution. It’s in the .pgn too, and if you’d like a fuller solution then please turn to column 128.

10 Reasons Why You Should Play London System at TheChessWorld.com

Korean wave and the power of ‘PM sent’ |