There is no stopping the Indian new generation of elite chess players. Gukesh Dommaraju, Arjun Erigaisi, Praggnanandhaa Rameshbabu and Nihal Sarin have taken over the news cycle with their prodigious achievements. We can safely anticipate to see them (the first two sooner than later) in elite, over-the-board events. For them, given their young age, no ambition is too big, as they can realistically aim at the World Championship title in years to come.

Just these last two days, Arjun and Gukesh — already 2700+ rated players — have defeated the strongest player of this era for the first time in their careers. Arjun beat Magnus Carlsen yesterday, while Gukesh got the better of the Norwegian today, in round 9 of the Aimchess Rapid online tournament. What is more, Gukesh broke Pragg’s record as the youngest-ever player to beat Carlsen during his long reign as world champion.

Back in February, Pragg had defeated Carlsen in round 8 of the Airthings Masters, the first tournament of the Champions Chess Tour. At the time, Pragg was 16 years, 6 months and 10 days old. Today, Gukesh beat the world champion at 16 years, 4 months and 20 days of age. 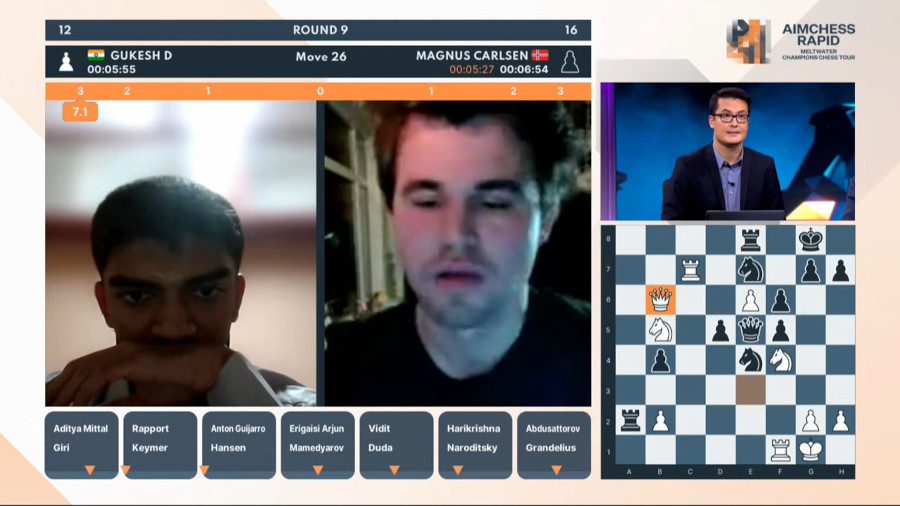 A level-headed teenager, Gukesh was critical of his play during the record-breaking game, as he noted: “Beating Magnus is always special, but I was not very proud of that game”.

Carlsen had the upper hand in a double-edged position, when an innocuous-looking move turned the tables in favour of the Indian.

The problem for Black is that White now has the strong 26.Qb6, threatening both Nd3, trapping the queen, and the combination Rxe7-Qe8+, which was seen in the game. Note that 25…Ng6 would have safely dealt with both threats, as the black knight attacks the f4-knight from its new post on the kingside (see diagram below).

After the precise knight manoeuvre, Black would have kept his material advantage, with good winning chances going forward. A fierce competitor, Carlsen was not at all happy once he realized he had made a critical mistake.

The game lasted three more moves, as it is incredible how hopeless Black’s position has become following that one blunder.

This was the first game of the day. Gukesh went on to lose against Jan-Krzysztof Duda before ending the day with back-to-back wins over Shakhriyar Mamedyarov and Eric Hansen. Carlsen, on his part, drew twice after this loss and defeated Nils Grandelius in round 12.

Gukesh has been extremely impressive in classical chess recently. Perhaps this rapid win wasn’t his proudest effort, even though getting a win is always nice.

Going into the final three rounds of the tournament’s preliminaries, Duda is leading the standings with 25/36 points, with Mamedyarov in sole second place two points back. Half the field will leave the competition after round 15. Nodirbek Abdusattorov, Richard Rapport, Anish Giri, David Anton, Vidit Gujrathi and Daniel Naroditsky — placed 6th to 11th — will be fighting for the last qualifying spots on Monday.

Every Employee Has the Right to Disconnect After Office Hours

Robert Ris’ Fast and Furious: A fascinating concept for White in the Pirc Austrian Attack