Having to win a game at all costs – you certainly know this unpleasant task from your own tournament practice. As a starting point for his video, Jan Markos chooses an unfortunate experience of his own from the European U16 Championship in the 90s, when, in his quest for a win, he spontaneously played a “fantastic” move before the time control and got mated in one right in return.

How could such an incident have happened? “Because I was trying to get what was impossible from the position. I was violating the spirit of the position, and I got punished for that.” Such “violations” occur again and again in chess and by no means concern only the character of the position, but often also that of one’s own playing style. And they lead much more often to losing a game than to winning it. In his video, Jan Markos presents a completely different approach that will help you to win the full point when it is absolutely needed!

Jan Markos: how to win in must-win-situations (excerpt from CBM #209)

For this he draws on examples from different areas of chess: starting with a game from a Correspondence Chess World Championship and ending with Magnus Carlsen’s endgame against Hikaru Nakamura in the Sinquefield Cup 2018. At the end – similar to his first contribution for ChessBase Magazine – there are again three basic recommendations for your tournament practice. To complement the video, Jan Markos provides a small collection of training exercises in CBM #209, which you should go through after watching the video! 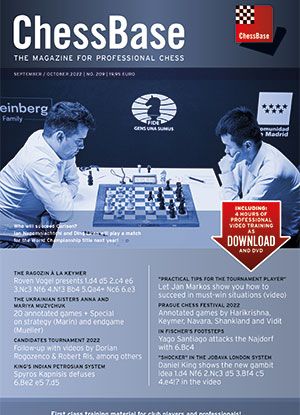 The start page of ChessBase Magazine #209 gives you direct access to the editors’ recommendations: the highlights of the issue! 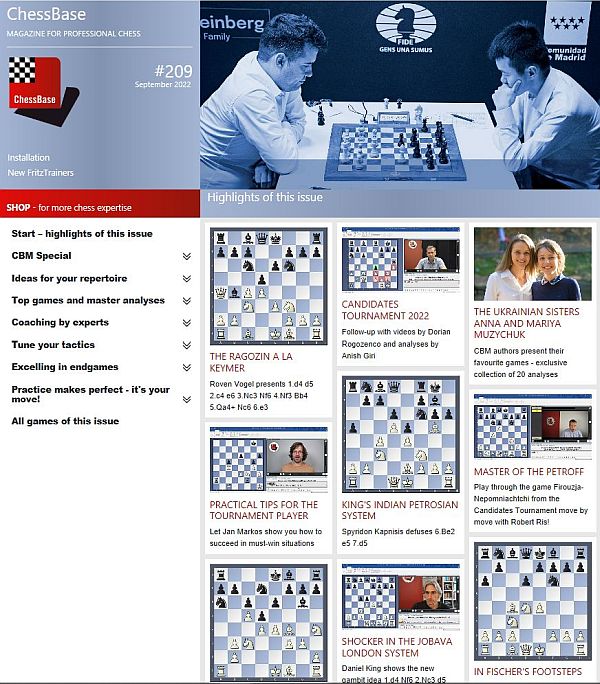 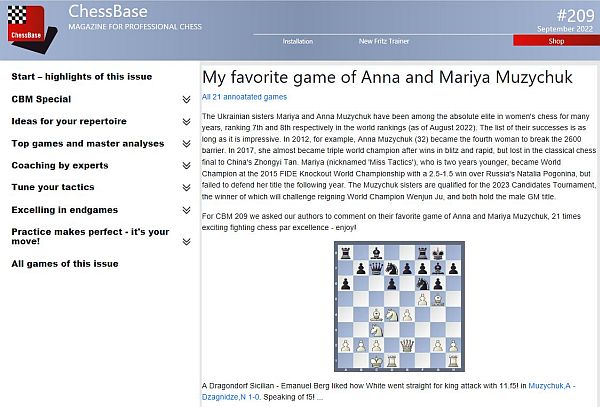 CBM authors analyse their favourite games of Anna and Mariya Muzychuk. Look forward to an exclusive collection of 21 annotated games! 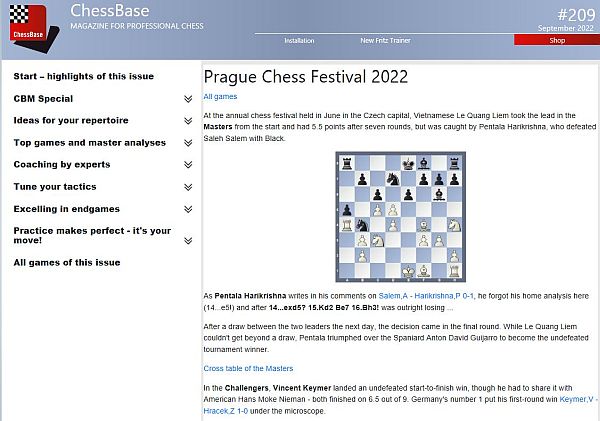 Prague Chess Festival 2022: The winners of the Masters, Pentala Harikrishna, and of the Challenger, Vincent Keymer, comment on one of their games. Plus analyses by David Navara, Vidit Gujrathi and Sam Shankland. 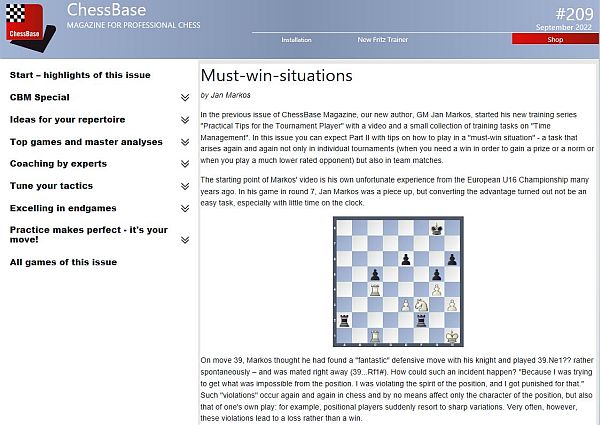 Jan Markos devotes Part II of his video series to the topic of how to play in a “must-win situation” – a task that arises time and again not only in individual tournaments but also in team matches. To complement the video, our new author provides a small collection of five training exercises that you should go through after the video lecture! 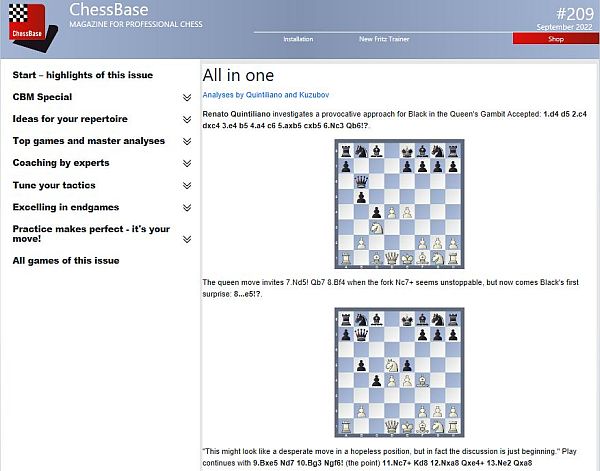 Renato Quintiliano explores a provocative idea for Black in the Queen’s Gambit Accepted, while Yuriy Kuzubov presents “a crazy Alekhine” with 5.Ba3! 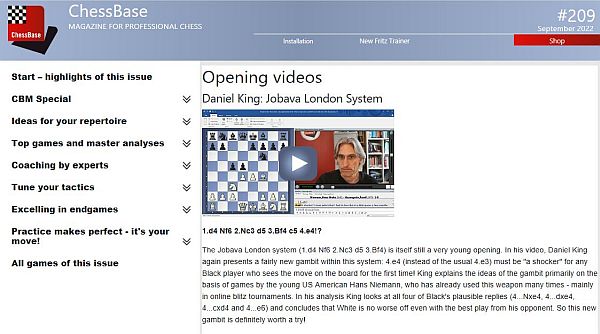 Daniel King shows “a shocker”: the gambit 4.e4 in the Jobava London System, often tested by GM Hans Niemann. Ivan Sokolov in the second part of his video analysis of the Queen’s Gambit Ragozin Variation with 8…h5 deals with the main move 9.h4. And Mihail Marin presents new developments in the English Opening based on the game Ding Liren-Nepomniachtchi from the Candidates Tournament.

New ideas for your Ideen for your repertoire 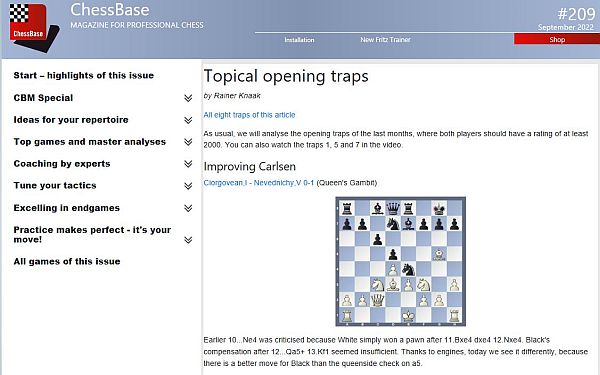 “From Sicilians to the Queen’s Gambit” – Rainer Knaak takes a close look at eight traps from current tournament practice, three of which he also presents in video format. 1.e4 players beware: In the French Advance our expert has come across “a very promising, completely new trap”!

Ian Nepomniachtchi is a master of the Petroff. His victory against Alireza Firouzja with the black pieces is the topic of Robert Ris’ interactive training session. Can you find the moves of the winner of the 2022 Candidates Tournament?

Mihail Marin highlights a few typical aspects of the positional play of Maria and Anna Muzychuk. The material is classified in the categories “Positional attacks”, “Positional sacrifices”, “Static play” and “Dynamic decisions”. 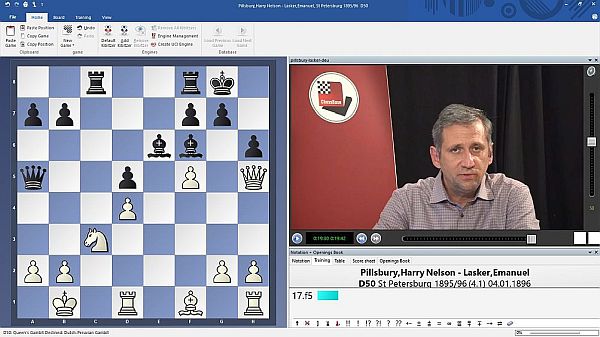 Dorian Rogozenco presents Pillsbury-Lasker (St. Petersburg 1896) – “a beautiful game” by the then world champion, Emanuel Lasker, with a number of sacrificial motifs worth seeing.

Tactics: Queen sacrifices of all kinds 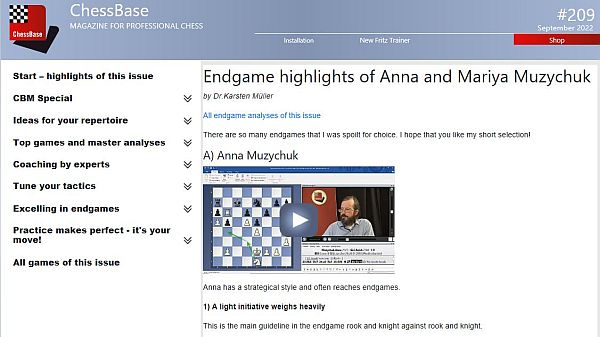 Hamburg endgame expert Karsten Müller has again found plenty of illustrative and training material. Do you already know the “Troitzky endgame”? In addition, Mueller provides a selection of the most beautiful endgames of Anna and Mariya Muzychuk (incl. video)!