It is a scenario every chess player has been through: you are solving an exercise and confident you have the solution you play your move. “Wrong!” we are told. “This is not the move.” It isn’t that you don’t believe it, but the move was played because we felt we were right. If we were wrong, we want to know why. However, regardless of whether this was the solution in a book which makes no mention of our choice, or a website that just tells us to try again, we are no closer to an answer.

This scenario is equally true of Solitaire Chess, a popular quiz in magazines such as Chess Life, where you were asked to guess the moves of a famous grandmaster and given points for choosing correctly. 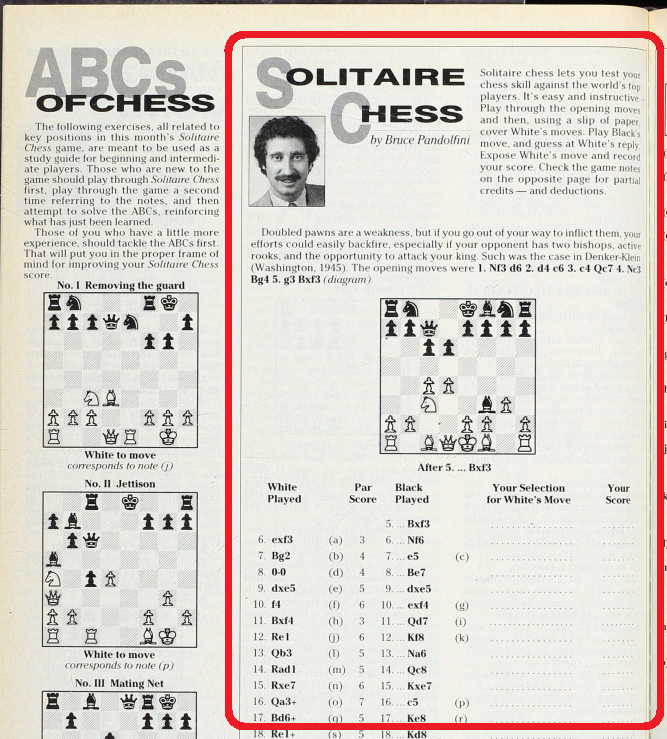 Just because you didn’t play Bobby Fischer’s move, that doesn’t automatically mean your move was bad, does it? What if your move is just different, but not actually worse? In both the scenarios above, a new feature in ChessBase 16 will solve this conundrum, the Replay Training function.

Where is the Replay Training?

When you open a game or position, it automatically opens to a board and the notation, the standard choice. 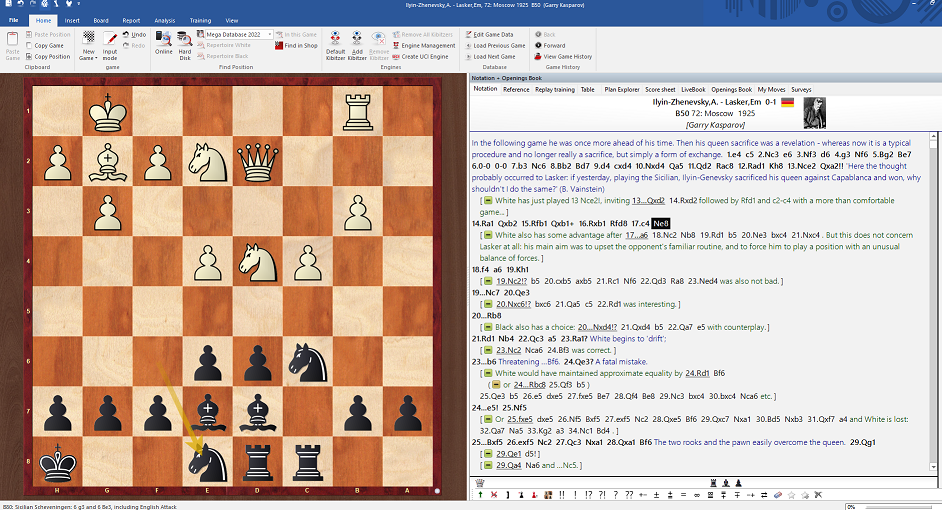 When opening a game, this is the default view

At the top is a series of tabs, the first of which is the Notation. Next to Notation is Reference, and if you were to click on it, you would be shown the opening statistics of the position.

One more tab to the right is Replay Training and that is the one you want. 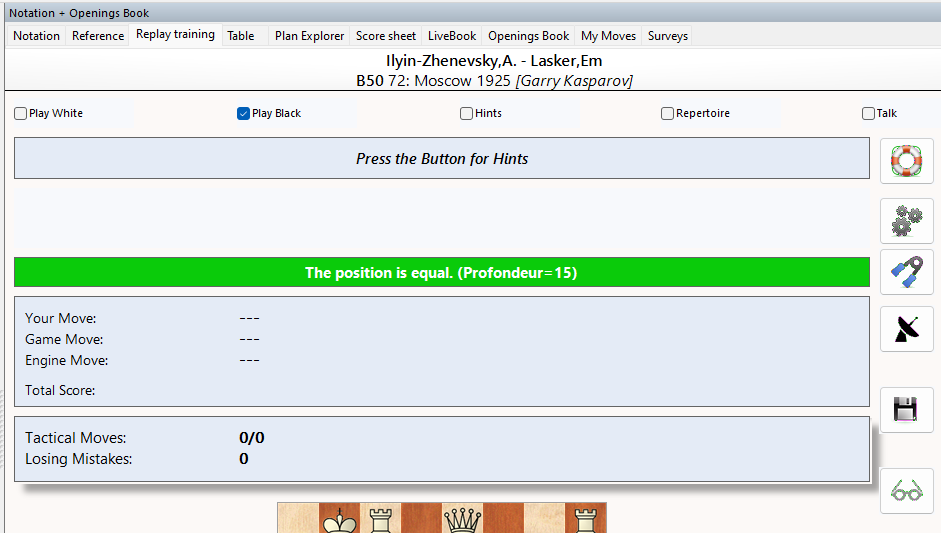 The default view of Replay Training

The new pane can seem strange and of limited use unless you understand its purpose and how to use it to your benefit. At the top it tells you which color you are supposed to guess (it can be both even if you wish) and whether you want hints on or not.

The hints will simply appear automatically if checked, but will still be available via the hint button if not.

Below is a colored bar that will give you the computer opinion (i.e. White is winning) and the depth the engine has calculated to (15 plies in this case).

Under that is a small pane that gives direct information on the moves you chose and how it rates compared to the move in the notation and the best engine move it has computed. It is easier to understand by showing this in action.

Using it with tactics positions

Suppose you have the following position on the board, a well-known combination by Petrosian:

Innocently, you decide to simply capture the rook on f7 with the knight. The program immediately tells you this is a mistake, and asks you to try again. But it does not stop there: it also tells you why, and by how much. 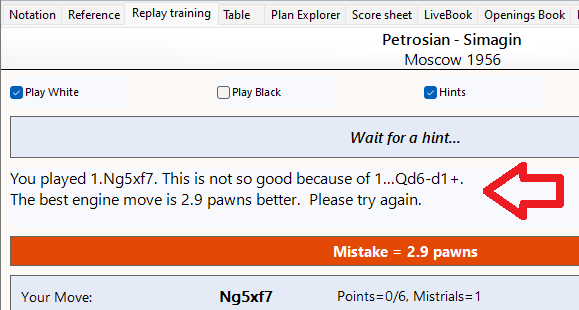 In case you are wondering, the notation to this position makes no mention of any of this. It only contains the mainline.

If you get the moves right, it will ask you about the next one.

Using it with full games

A very popular quiz is Guess The Move in which you take the side of one player and try to guess the best moves, including any brilliancy they may have played as well. When coming from a magazine or a book, this also meant covering the moves and revealing them one by one. 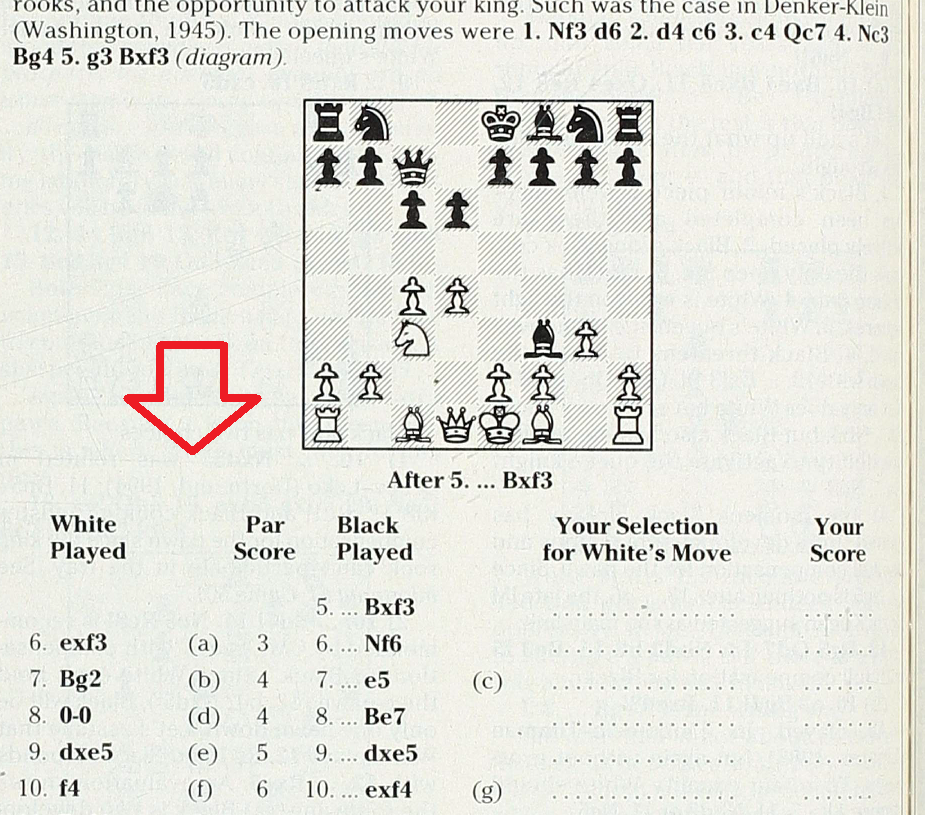 As entertaining as this might be, the author of these exercises could never guess every possible move so they would give partial points for an alternative here and there at best. This meant that even if your move was actually better (per an engine) or of similar value, you were not rewarded for your good choices. Replay Training solves this.

Imagine you are replaying a famous game between Richard Reti and Emanuel Lasker, and want to see if you could do as well as the great German champion. This is the position on the board:

The position is balanced and in the game, Lasker played 12…a5. However, you chose instead the reasonable looking 12…Rac8. In a normal quiz, you’d just get zero points, however here Replay Training does not punish you so unfairly.

Instead it tell you your move was fine, and what the actual game continuation was. It does not ask you to ‘try again’, but instead plays the move from the game so you can guess the next move. It also provides you detailed feedback on your move compared to the actual game, and the move the engine thought was best.

As you can see, 12…Rac8 was actually a bit better than Lasker’s 12…a5, but also a fraction worse than the engine’s top choice of 12… Rfc8. You are shown the computer evaluations of all three moves, and will see your grade was not downgraded for such a minuscule difference.

The function is able to tell the difference between a pure exercise and a full game, which is why in the first example it asks you to try again, but in the game quiz it does not.

This sort of feedback on your choices to provide answers when you need them and allow the engine to help hone your analytical skills instead of simply replacing them is a wonderful addition and one that will be invaluable to all students of the game. Try it out and share your impressions!

Here is a video demonstrating the Replay Training feature in action

Laguna Half Marathon in Santa Rosa

Laguna Half Marathon in Santa Rosa