The idea was first proposed – at least by me – on October 17th, 2005. It was departure day after the FIDE World Championship tournament in San Luis. Towards the end of the event there had been suspicions, expressed by some of the players, that there may have been signalling going on during the event. FIDE officials were worried and discussing the matter in their board meetings.

I got into a long and intense conversation with FIDE Vice Presidents Zurab Azmaiparashvili and Israel Gelfer, and proposed a simple solution – one that was designed to make it harder for players to cheat during a top-level event. It involved delaying the live broadcast of moves over the Internet by fifteen minutes. The proposal was enthusiastically greeted by the two VPs, who asked me to write it up and submit it to the FIDE Presidential Board. This I did, on at least three separate occasions, over the years.

You can read about the contents of the proposal and it’s genesis in this report. A full version of my formal submission is given in the links below.

Now, after sudden cheating allegations arose in Saint Louis, the organisers decided, after round three, to suddenly implement a 15-minute delay in the game broadcast on the Internet. I felt quite gratified to hear this. But a good friend, one who is normally very astute, and whose intelligence I deeply admire, reacted critically. He wrote:

Your solution to cheating at chess reminds me of a famous quote from a US General made during the Vietnam war, “In order to save the village (from the Vietcong) we must first destroy it.” Therefore we get a new Friedel directive, “In order to save chess from would be cheaters we should first destroy the enjoyment derived from broadcasting the games live.”

This left me stunned. Was the friend suggesting that the enjoyment of live chess was based entirely on seeing each move in the exact instance it was played? If I, sitting here in Hamburg, 7500 km from Saint Louis, realize the moves I see in the broadcast were actually executed fifteen minutes earlier, then that would destroy my enjoyment of the game? As it would for someone in Sydney, 14,000 km away? And destroy it for the rest of the 99.9% of the spectators watching the games. They are located all over the world and, like me, watch the game on the Internet? 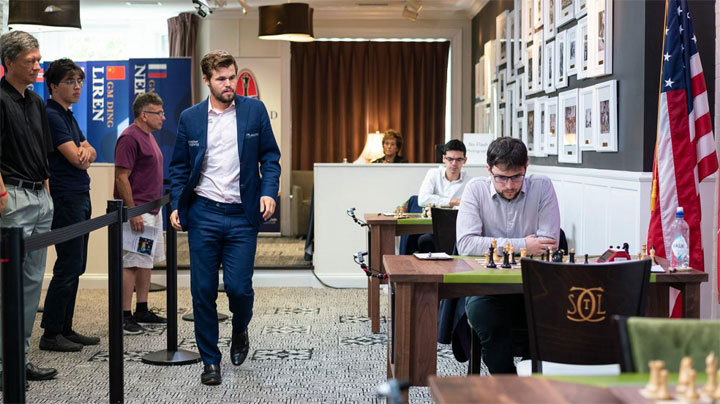 Would that mean that with the 15-minute broadcast delay it would only be the people in Saint Louis, who were present in the playing rooms of the tournament venue, that would be really enjoying the games?

In any case, in my proposal to FIDE, described to FIDE seventeen years ago (and formally delivered soon after) I suggested we needed to take steps to address a looming problem. “These steps do not eliminate the problem completely,” I said. “They just make it much harder to cheat.” The measures I proposed, in summary, were:

The delay in the broadcast (3) was of considerable importance. It would be implemented by building a relay loop in the transmission of the moves from the boards to the outside world. The sensor boards could display the current board position locally inside the playing hall, but a delay module (software) would pass it on to the Internet after a given amount of time. The moves would appear in the broadcast at exactly the tempo in which they were played, just 15 minutes later. It would be hardly noticeable for the world-wide Internet audience.

Implementing this mechanism means that any outside assistance to the players would be greatly hampered. Even if a cheater is equipped with a very sophisticated reception device, something that would even elude metal detectors, his accomplices have the problem of receiving the moves from the playing venue in time to analyse and pass their results on to the cheater.

At the time I was severely taken to task by a journalist of the magazine New in Chess. First of all he reminded me that the vast majority of players had no wish to cheat at all. And:

In any case any ‘cure’ should be avoided that is much worse than the disease. Such as the 15-minute delay of the transfer of the moves that once again was promoted on the ChessBase website. On the surface the idea doesn’t sound that bad (the cheaters will not get the moves signalled in time, because their buddies lose precious minutes), but in fact it lacks all logic.

Mr. Friedel knows full well that the 15-minute delay only makes sense if you take substantial additional measures [all of which I had suggested–ff]. But if you apply all these extra measures (such as searching the players, blocking radio signals, not allowing anyone in or out of the hall while the round is in progress) there is no reason whatsoever why you should have a 15-minute delay in the first place! Why rob the people at home of that wonderful luxury of following the games in realtime?

Honestly, now that we have all watched six rounds of the Sinquefield Cup in Saint Louis with the 15-minute delay implemented, has it really ruined your enjoyment of the games? Did it fatally detract from the excitement you felt in the first three rounds, when the moves were displayed on your screen the exact moment they were played?

The 15-minute broadcast delay was most relevant in 2005, when I first proposed it. At the time, and in the following years, it was necessary to use a large desktop computer in order to see deeper than a player in his game. Typically, the computer assisting a player would be halfway around the world – and organisers would be delivering the moves of the opponent in real time to it. That is what the delay was meant to prevent. With it in place, the assistant would have to exit the playing hall after every move to relay it to the conspirators. That would be quite easy to spot.

Today the situation has changed somewhat. It is entirely possible that my smartwatch could play in Saint Louis and stand up to the world elite GMs there. It follows that a member of the audience who is wearing a watch could signal a player when an extraordinary chance, a brilliant move, is displayed. This could be seen with a glance at the watch. I have not actually tried following a game and seeing 3000+ engine analysis on a smartwatch. It may be pure speculation that this is feasible. But if it is not, let me assure you it will only take months or a year for it to become a very real possibility.

So how will that influence chess, the game well all love. I asked a friend who is an expert on electronic communication, to attend a top tournament, and a championship match. He snooped around, saw how people were screened at entry, how a glass screen prevented the players from seeing the audience. I also showed him that before the start of a round we had access to the stage, the restrooms of the players, the passages and the toilets. He was devastated. The report he filed for me after studying all conditions started with the statement: “What a pity, it was such a wonderful game!”

But all is not lost. Another friend, a security expert who worked for the US government, a chess enthusiast and a contact magician, has promised to give me a catalogue of the measures that should be taken today. They will not be as harsh as the following “solution”:

When Andrew Paulsen was alive and staging a World Championship for FIDE, he consulted me. We decided that ultimately it would only be possible to rigorously prevent cheating by staging the match in a Faraday Cage, in a remote location, without spectators. Andrew actually started negotiating with the state of Bhutan to stage the championship in the Himalayas. He wanted to make it a pure Internet event. But that didn’t materialize. So the match was held in the traditional way. It relied on scanning for metal on entry, but mainly on trust in the honesty of the players.

A history of cheating in chess (1)
Hardly a month goes by without some report of cheating in international chess tournaments. The problem has become acute, but it is not new. In 2001 Frederic Friedel contributed a paper to the book “Advances in Computer Chess 9”. It traces the many forms of illicit manipulations in chess and, a decade later, appears disconcertingly topical and up-to-date. We reproduce the paper in five parts.

A history of cheating in chess (2)
Coaching players during the game is probably the most widespread form of cheating (rivaled only perhaps by bribery and the throwing of games). Although this practice began long before the advent of chess playing machines, computers have added a new and dramatic dimension to this method of cheating in chess. You will never guess: who were the pioneers of cheating with computers?

A history of cheating in chess (3)
In January 1999 the main topic of conversation amongst top players like Kasparov, Anand and others: who was the mysterious German chess amateur, rated below 2000, who had won a strong Open ahead of GMs and IMs, with wonderfully courageous attacking chess and a 2630 performance? How had he done it? Turns out it was with unconventional methods, as subsequent investigation uncovered.

A history of cheating in chess (4)
Las Palmas 1996: Garry Kasparov is agonizing over his 20th move against Vishy Anand. He calculates and calculates but cannot make a very tempting pawn push work. Immediately after the game he discovers, from his helpers, that it would have won the ultimately drawn position. The point that became clear to him: a single bit of information, given at the top level in chess, can decide a game.

A history of cheating in chess (5)
A few weeks ago FIDE took first executive steps to combat the most serious threat that the game of chess currently faces: the secret use of computer assistance during the game. In a paper written fourteen years ago Frederic Friedel had first drawn attention to the dangers that are lurking. Here is the fifth and final section.

Inmates around the world getting ready for Prisoners Online Chess Championship