The following review by Stefan Liebig appeared in the current September issue of the German Schachmagazin 64. Translated with kind permission.

The focus of the issue is the Chess Olympiad in Chennai, in which the Uzbeks won sensationally. Also very interesting is the report on the Bezold family, where the publicity-shy Bobby Fischer found shelter for a few weeks in 1990. 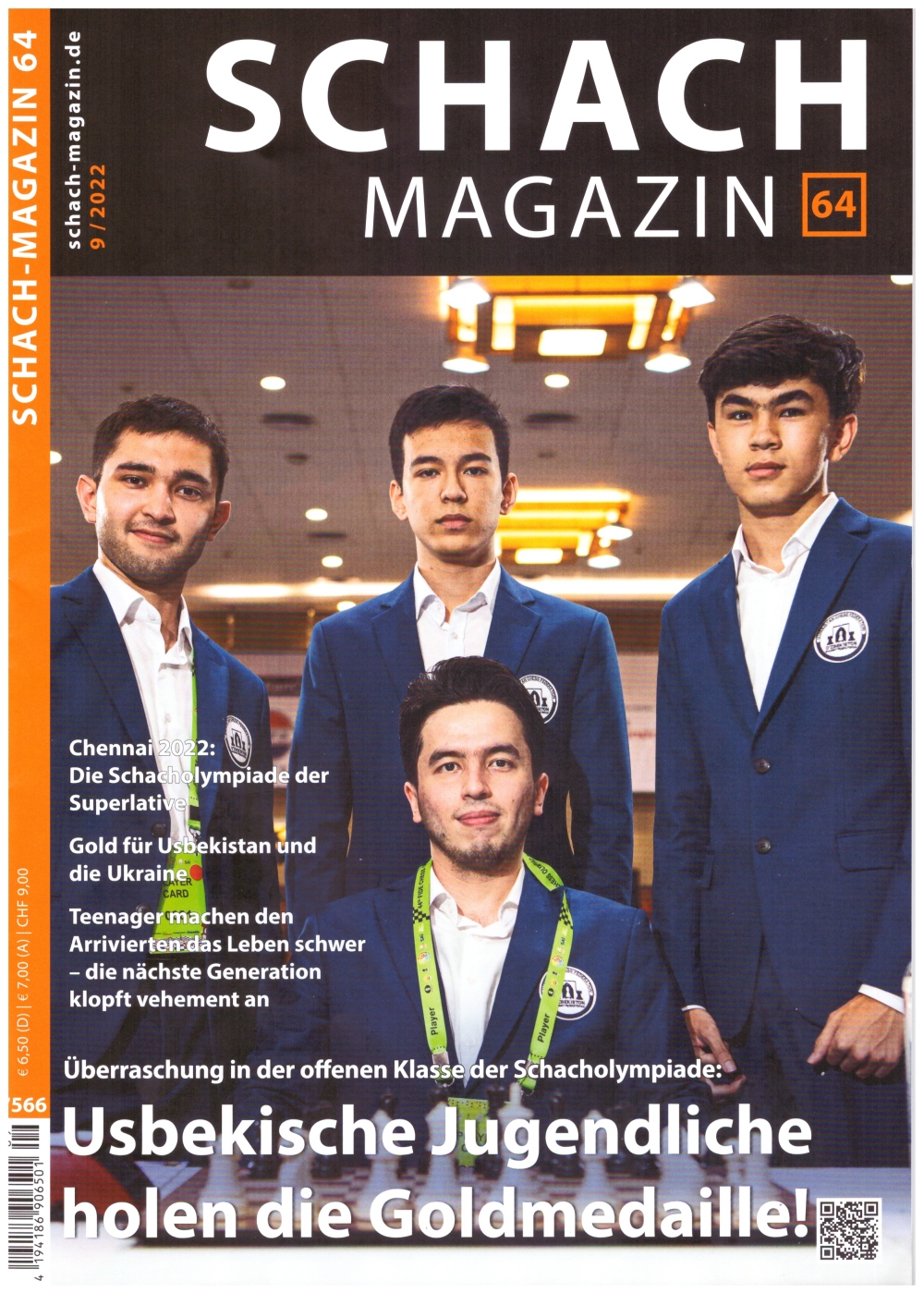 Positions with opposite-colored bishops are always drawn? That’s probably as widespread a myth as the one about rook games always ending in a draw. Romain Édouard tackles such legends on his recently published Fritztrainer course and examines the strategic fundamentals that distinguish drawing from winning positions. With instructive examples, the 32-year-old grandmaster, who among other things was U-16 European Champion and multiple Chess Olympiad participant for France, shows how very effective and promising attacking strategies can be implemented even in seemingly drawish middlegames.

Impressive games show the venom that is often hidden in such positions: such as Vladimir Kramnik’s game against Vesselin Topalov from 2015 or the 2013 game between Magnus Carlsen, who was then just about to become World Champion, against Sergey Karjakin, against whom Carlsen was to defend that very title a few years later. Édouard, who comes from Poitier, attaches great importance to detailed and comprehensible explanations. The topic of the initiative is always in focus. In particular, the author looks at the difficulty of distinguishing good from bad exchanges. He shows positions in which the advantage of having the pair of bishops is gradually increased until the better player liquidates into a winning position at the right moment. This is a topic that again and again causes even very experienced chess players great problems and it is examined in detail here.

The next chapter deals with keeping the bishop pair. An impressive attacking win by Anish Giri against Fabiano Caruana (2013) is followed by an example from Édouard’s own practice (2011), a classical example by Akiba Rubinstein (1907) and a win by Gata Kamsky (2019). Here the author places great emphasis on the advantages of the bishops pair, and stresses how important it is to have your bishops on good diagonals where they dominate the pieces of the opponent and provoke weaknesses.

After that follows a lesson about the always exciting topic of the exchange sacrifice that starts with an exciting game by former World Champion Garry Kasparov against Sergei Movsesian (2000). In “his” Najdorf Sicilian – that unfortunately has almost disappeared from current world-class tournament practice – Kasparov often liked to sacrifice an exchange on c3. In the example chosen here by Édouard, Kasparov impresses by not rushing things. Édouard shows how the former world champion patiently builds up his compensation until he finally wins.

In the section “How to launch a furious attack” things are much more heated – as the name of the chapter indicates. Once again Topalov is in on the action. You can see his breathtaking attack in a remarkable win against Ruslan Ponomariov from 2005, followed by three more breathtaking attacking games other players. After all these beautiful attacking victories, Édouard arrives at the crucial question: when is the right moment to sacrifice? With five games from the last three decades as examples … the viewer gets important clues when to sacrifice. But – and this is an advantage of the course  – Édouard it also talks about the wrong moment for sacrifices. This certainly helps to prepare rash and bold attackes a little better…

Édouard also offers a lot of practical hints, for example by explaining that lost positions can sometimes be saved by setting traps or returning material. This gives your opponent the opportunity to make mistakes, and offers better practical chances than looking for the best moves that would merely delay your own defeat for a few agonizing moves. Such advice is just another bonus of this Fritztrainer.

Apropos bonus: after the lessons follows a large number of analyzed and thematically sorted games for independent work. The second volume contains even more tasks to solve.

The lessons in the first volume are usually between a quarter and a half hour long and require you to listen, but in the second volume you are asked to solve a number of typical exercises. In short clips that last only for a few minutes, Édouard shows famous and less famous exercises that you can solve to deepen the understanding of the material presented in the course. Solutions entered by the user are commented on and improvements are explained. This is a proven and goal-oriented technique, which is the great advantage of these Fritztrainer courses. The exercises are divided into the following chapters:

The moment to go for it

Édouard gives helpful tips that come from his rich experience in world-class chess – after all, at his peak he had a rating of more than 2700 Elo. He provides insights into how to calculate the decisive variations faster and better and trains the intuition of the spectators. His short variations are instructive, as he places particular emphasis on a good understanding of the position and recognizing the right moment for strategic changes in the position. Also, the summaries at the end of each chapter sum up what the learner should pay attention to and what is the secret of each master’s winning strategy. It is also important that Édouard explains marginal aspects, e.g. why some opening variations are no longer seen at top level. Sometimes opening lines have been analyzed by engines to death and no longer offer possibilities.

All in all, an exciting course that offers a good combination of strategy and tactics. Both Fritztrainer volumes can be enjoyed individually, but it is recommended to get both courses to combine theory and practice. The videos are in English and French and are easy to understand.