The European Women’s Chess Championship kicked off on Saturday in rainy Prague. No fewer than 123 players from 28 countries are fighting off at the Don Giovanni Hotel in Prague. These players are not only competing for a share of the €60,000 prize pool but also for one of the — at least — nine spots in the next edition of the Women’s World Cup.

The host country is represented by 14 players, while the delegations from Ukraine and Poland arrived in Prague with 13 and 12 participants, respectively. Countries such as Turkey, Denmark, Lithuania, and Estonia have also sent at least one representative.

The biggest favourites to finish near the top are the members of the Georgian team, who recently finished in second place at the Chess Olympiad in Chennai — i.e. Nana Dzagnidze, Lela Javakhishvili and Nino Batsiashvili. Nonetheless, the top of the starting rank is extremely balanced, with 13 players rated 2400 or above.

The playing hall is accessible to spectators only during the first ten minutes after the start of the round, but you can watch all the games, along with commentary by GM Martin Petr and guests, live and on-demand at the Czech Chess Federation’s YouTube channel.

During the broadcast, you can ask the presenters questions, which they will surely be happy to answer. The progress of the tournament is presented, among other things, by innovative shots from cameras located in the playing hall. It is thus possible to follow the expressions on the faces of the favourites to win the event. 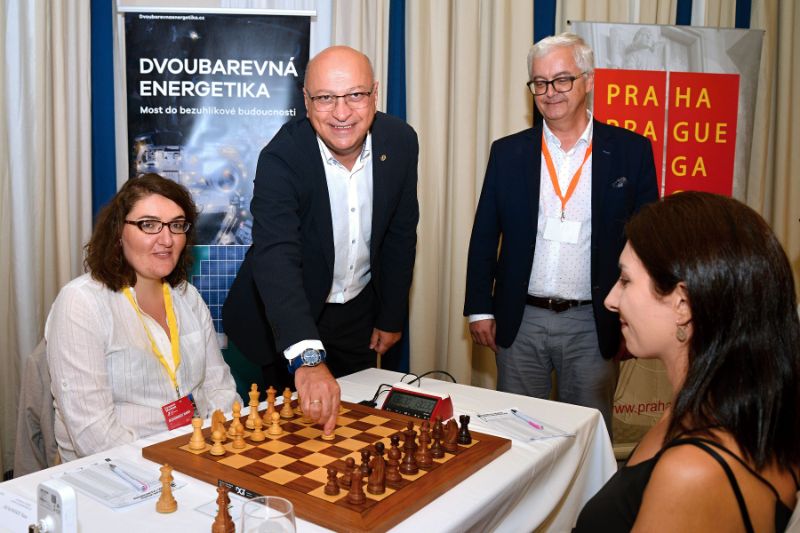 Four rounds have been played at the Czech capital, and none of the participants has managed to keep a perfect score, as eight players are sharing first place on 3½/4 points. Three of the co-leaders hail from Azerbaijan, including Gunay Mammadzada, who last year impressed at the Gibraltar Grand Prix. Also in the mix are the top players from Georgia, Armenia and Ukraine — i.e. the experienced GMs Nana Dzagnidze, Elina Danielian and Anna Ushenina.

Ushenina, a former women’s world champion, arrived in Prague shortly after grabbing a silver medal on board 3 at the Chess Olympiad (only behind tournament sensation Oliwia Kiolbasa) and, of course, also collecting a gold medal for Ukraine’s victory at the event in Chennai.

The Ukrainian grandmaster won three games in a row in rounds 2-4 after drawing Romania’s Miruna-Daria Lehaci with the black pieces on opening day. Ushenina escaped with a half point after Lehaci could not find the winning idea in a clearly superior ending with queens and two minor pieces per side.

The Romanian played 53.Qe7, attacking the h4-pawn, which was White’s main plan to make progress in the position. However, this allowed Black to relieve the pressure by 53…Nf3+, with a discovered attack against the dark-squared bishop. Ushenina got enough counterplay to swindle her way to a draw.

Instead, in the diagrammed position, Lehaci could have gone for the slick 53.Bg1, keeping the pressure along the dark-squared diagonal while preventing White from untangling. The usual plans combining an attack on the h-pawn and the advancement of the e-file passer would have most likely led to a win for White.

Severe Tropical Storm Florita PH in Photos + How You Can Help

Severe Tropical Storm Florita PH in Photos + How You Can Help