Nicholas Pert is a chess grandmaster from England who has regularly played for the England team in Olympiads and European Team Championships. He is a former World U18 chess champion. Nick won the British Championship last year, and became second this year, just a couple of days ago. 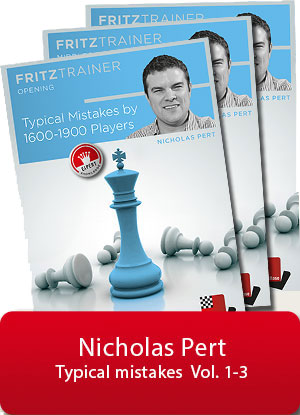 On his Fritztrainer series he writes:

“As the National Head Coach for the English Chess Federation I train many improving players, and see some typical mistakes that repeat themselves.

In this DVD I have taken a large collection of games played by players, predominantly in the rating range 1600-1900, and I have looked for typical mistakes.

I have broken these examples into various themes such as “Miscalculating Forcing Lines”, “Being Too Materialistic” and “King Safety” amongst others. Each theme has several examples to demonstrate typical mistakes, and there are various test throughout the DVD so that the viewer can try and find the best move in certain positions.

Read this interview with Nicholas Pert