Polish star Jan-Krzysztof Duda seems to have found a magic formula to stop Magnus Carlsen’s streaks. In October 2020, Duda ended the world champion’s unbeaten streak of 125 games in classical chess. In August 2021, the man from Wieliczka eliminated Carlsen from the World Cup before beating Sergey Karjakin in the final of the massive knockout tournament.

Now, at the FTX Crypto Cup, Duda was the first player to prevent the world champion from collecting three points in a match. Carlsen had a perfect 12/12 score until round 4 and, after losing to Duda in tiebreaks (grabbing one point), he is now the sole leader in Miami. Praggnanandhaa, who had kept pace with Carlsen, lost 2½-½ to Le Quang Liem, thus failing to match the world champion’s score for the first time in the event.

The confrontation between Duda and Carlsen was very eventful. Duda won the first two games, before a power outage at the Eden Roc Hotel forced the organizers to stop the round for a little while. The pause ended up favouring the world champion, who managed to recover and take the match to tiebreaks by scoring two wins in a row.

Given the change of momentum, it was expected for Carlsen to win the tiebreaks, but Duda is a fierce fighter, known for his ability to perform well under pressure. In the first blitz encounter, the Polish grandmaster had a winning position in the late middlegame, but suddenly gave Carlsen a chance to escape with a draw.

36.Rxg5 is not the only move that keeps a dynamic balance in the position, but it is the most forcing. The idea is that after 36…Nxg5 White can play the difficult-to-find 37.Bf7+ — if Black captures with 37…Kxf7 there is 38.e6+ Qxe6 (all other moves lose) 39.Qh7+ and White will be able to give a perpetual check with the queen on the open board; the alternative 37…Kf8 fails to 38.Qf5 and White will shortly force a draw by perpetual.

Carlsen instead played 36.Be4, and went on to lose the game seven moves later, since Duda quickly responded by 36…Rc1, forcing a rook exchange that eliminates the possibility of entering the lines shown above.

The world champion found himself in a must-win situation for a third time on a single day. In yet another rollercoaster game, he could not make the most of his advantage and ended up losing again. The Norwegian later confessed:

This was so pathetically poor that it’s hard to find words. I just couldn’t think!

Firouzja gets a convincing 2½-½ victory

Much earlier, Alireza Firouzja had collected three points by beating Hans Niemann by a convincing 2½-½ score.

The youngster is now two points behind Carlsen and one point behind Pragg in the standings, as he is set to face the world champion in the next round. While Carlsen will need to deal with the frustration from Friday’s match before facing his dangerous colleague, Firouzja will likely feel confident after having won four matches in a row (one in tiebreaks).

In the second game against Niemann, Firouzja impeccably broke through on the kingside to convert his positional advantage into a full point.

26.Nh6 Qg7 27.g4 was the beginning of the end for Niemann. Black’s position is all but fully paralysed, and Firouzja only needed four more moves to win the game.

Praggnanandhaa’s winning streak also came to a stop on Friday. However, despite losing 2½-½ against Le Quang Liem, the youngster from Chennai is still greatly positioned to fight for tournament victory. In round 6, Pragg faces a Duda in shaky form before going against the world champion on the final day of action.

Moreover, the Indian might be favoured by a potential draw ‘in regulation’ between Firouzja and Carlsen on Saturday.

In round-5’s match, after drawing the first game of the day, the ever-dangerous Le showed how to make the most of a position with rooks and opposite-coloured bishops.

Black is completely winning here. He has the more active rook (the white rook needs three tempi to reach the centre of the board) and the safer king (Black’s pawn on h6 plays a key defensive role). Le won this game and the next one to grab his second victory of the event.

Levon Aronian kicked off the event with two wins, but has failed to grab a single point since the second round. On the other hand, Giri is on the upswing, as he has now collected six points in two rounds after having struggled to find his usual good form at the start of the event.

Much like Le and Firouzja, Giri won games 2 and 3, following a draw, to win the match by a 2½-½ score. In game 3, playing black, the Dutchman got to trap his opponent’s queen.

30…Ng6 ‘checkmates’ the queen. There followed 31.e8Q Rxe8 32.Rxe8 Nxh4 33.gxh4 — White did get some material for the queen, but the connected passers on the kingside left Aronian unable to activate his pieces shortly after. The US grandmaster resigned on move 37. 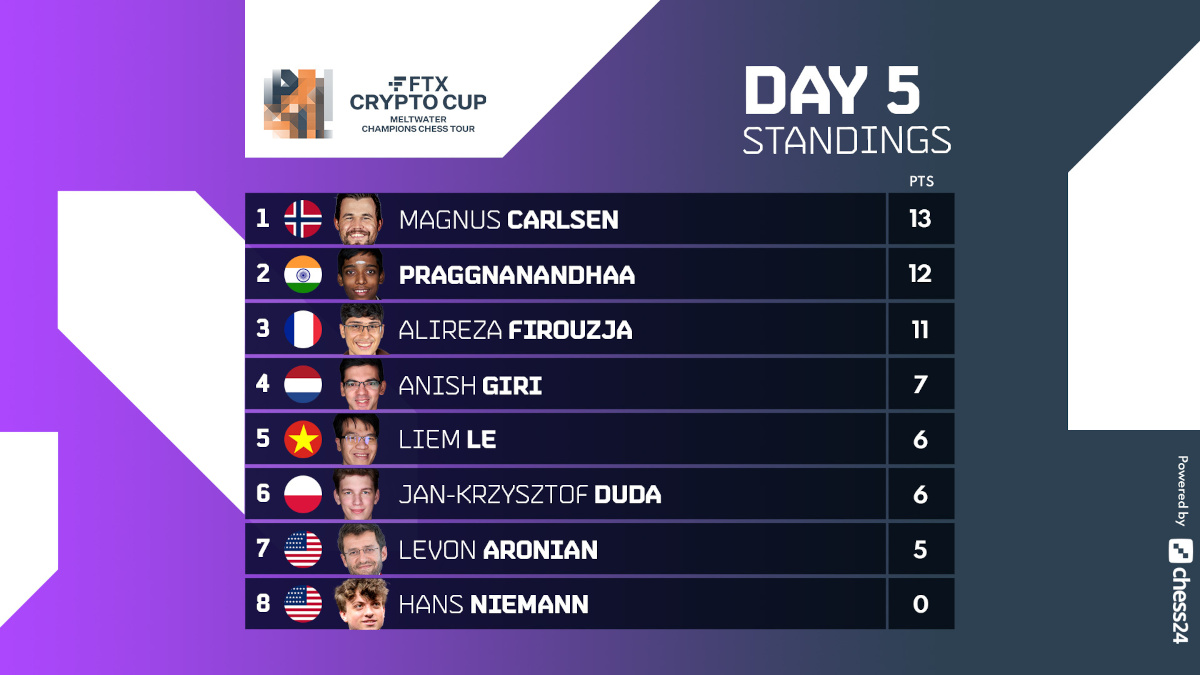 Pursuing the military’s modernization with force and power

Endgame Riddle Fischer vs Spassky, Game 10: Spassky could have drawn!

4 New Year’s resolutions for a healthier environment in 2022