World champion Magnus Carlsen, who founded Play Magnus Group —the company that runs the Meltwater Champions Chess Tour— has proven to be as strong playing rapid chess online as he is playing over-the-board classical chess. The Norwegian has won both the first edition of the series in 2021 and the first two events in this year’s series.

Facing Anish Giri in the first round of the FTX Crypto Cup, after two fighting and entertaining draws, Carlsen scored back-to-back wins to grab 3 points and $7.500 in prize money for his outright win in regulation — i.e. no tiebreaks were needed.

Carlsen won game 3 with the black pieces. Giri underestimated his rival’s counter-chances in a double-edged position, and was tactically punished by the strongest player in the world.

White’s minimal attacking chances have been dealt with, and now Black has a completely winning position. After Giri’s 32.Nxd5, Carlsen found 32…Qd2, when 33.Rd1 can be responded by 33…Rc1 making use of the pin.

34.Nc3 does defend the rook, but it does not defend against Carlsen’s killer blow.

34…Qe1+ and White resigned, due to mate in the next move along the weakened back rank.

Perhaps in about 12 years (or less) — yes, Carlsen is 12 years older than Firouzja — we will see the Frenchman and the Indian facing off in a match for the world crown. Although the competition to reach the pinnacle of the chess world will be fierce, as was proven by Gukesh, Nodirbek Abdusattorov and Arjun Erigaisi at the Olympiad in Chennai.

In Monday’s duel between the youngsters, Pragg emerged as the winner in a match that saw the first three games won by the player marshalling the white pieces. Perhaps the most impressive victory was the one achieved by the Indian in the first game, when he outplayed an over-optimistic Firouzja from the white side of a Berlin Defence.

White already has a considerable edge, and Pragg’s 25.d4 materializes the advantage, since Black cannot grab the pawn due to Re5-b5, forking queen and knight. The 17-year-old from Chennai went on to get a 44-move victory.

The one match that ended after three games included a technical mishap in the first encounter, as Hans Niemann’s computer needed to be rebooted, giving Jan-Krzysztof Duda five minutes to reflect on a crucial position.

Duda’s victories in all three games featured sharp tactical shots. In game 2, he had the quicker attack in a position with opposite-side castling and both contenders going at it on ‘his’ side of the board.

Niemann resigned after 37…Rxb4+, as there is no way to prevent mate.

Levon Aronian, who comes from having a subpar performance in the Olympiad, managed to outplay rapid-play specialist Le Quang Liem to kick off the event. Aronian won the latest event of the online series, as he defeated Wei Yi in the final of the FTX Road to Miami tournament. Meanwhile, Le was the runner-up in the previous major of the series, when he lost the final to Duda at the Oslo Esports Cup.

A win for Aronian in the first game was followed by three draws, with the Armenian-born grandmaster saving a draw from a lost endgame position in the second encounter of the day.

Le is an exchange and a pawn up. His 62.Rxa5 is not actually a mistake, but it requires a precise follow-up to keep the advantage — playing 62.Rb4, for example, would have made the Vietnamese’s task easier.

After 62…bxa5, only 63.Rxa5 keeps White’s advantage while Le’s 63.Kxa5 actually leads to a drawn position, despite Black being two pawns down. Aronian went on to show the right technique to keep the balance. 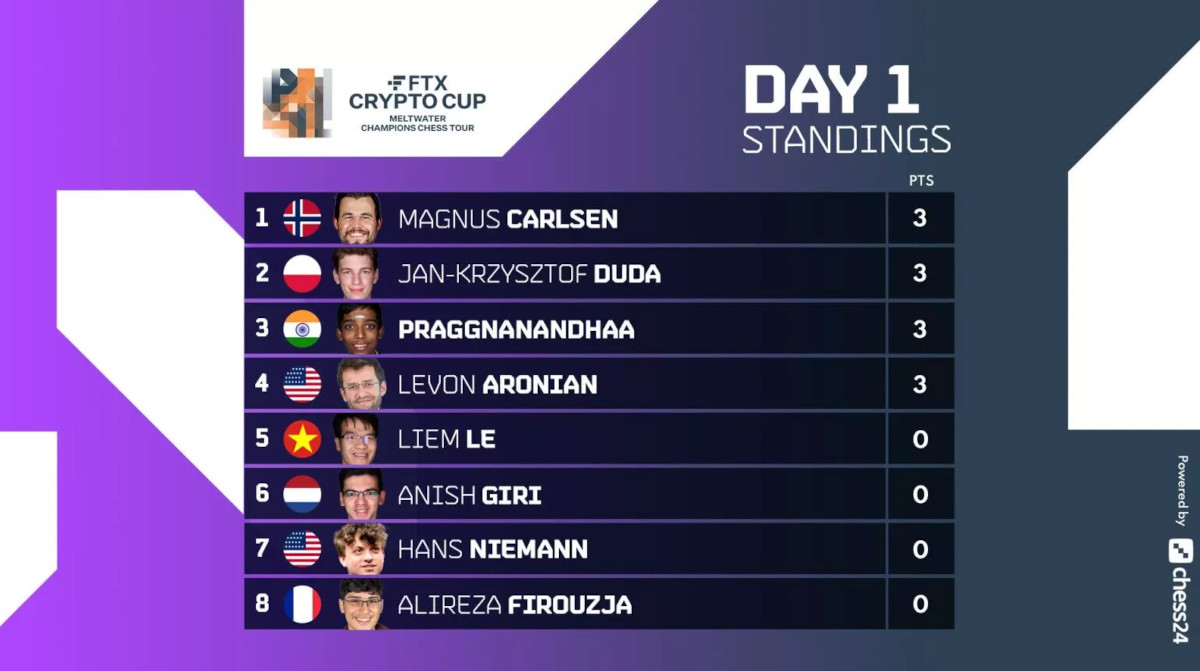 Tales of Illumina: A Magical Experience With PH Myth

Marcus Smart Cleared To Play In Game 3 Vs. Bucks

Are there any advantages to solving chess puzzles ‘backwards’?

US Congress passes budget including $14 billion for Ukraine