After ten games the score was 6½-3½ for Fischer. The champion had not won since the first game, and of the last eight points had only scored 1½ points – from three draws. In Garry Kasparov On My Great Predecessors, Part 4 the 13th World Champion writes: 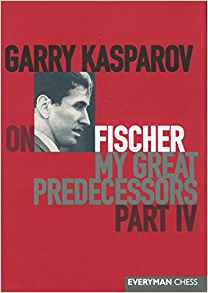 “It is interesting that no one, in my opinion, has drawn attention to a staggering coincidence: at that point the match score was 6½-3½ – if Fischer’s zero for his default in the second game is discarded, we have the final result of his match with Petrosian! Thus if it had been the best of 12 games, as in the Candidates matches, Spassky would already have been on his way home …

However, from this moment in the match the play took an even course. The champion calmed down and began fighting with the desperation of the doomed: he sensationally crushed his opponent in the 11th game (the only occasion where Fischer risked repeating a variation that had occurred earlier: the 7th game was also a Sicilian with …Qxb2) and then he confidendy gained a draw in the 12th.”

In the magazine New in Chess vol 6/2012, pp.60-68, GM Lubomir Kavalek, who was in Reykjavik for the Match of the Century, both as a journalist and, in the second half, as one of Fischer’s seconds, wrote:

“The [eleventh] game brought back memories of my first game against Fischer from the 1967 Sousse Interzonal, which he famously left after he was in the lead. He allowed his opposition only three draws, winning seven games. We played the Poisoned Pawn variation of the Sicilian Najdorf to which, faced by Fischer’s novelty, I added a poisoned knight. It started a new trend and the knight has been sacrificed in many different ways ever since. Bobby grabbed the horse with gusto, but made one single slip and had to find a difficult escape from the slippery slope to make a draw. ‘You added a colossal brick to the opening theory’, Larsen commented on the game.

But I also saw two different sides of Fischer. During the game Bobby requested more lights and eventually we moved to a different table, closer to the window. It felt like we were playing in a TV studio, but it was not enough for him. Two more lamps were brought in, and it was like playing chess on the beach in the midday sun.” 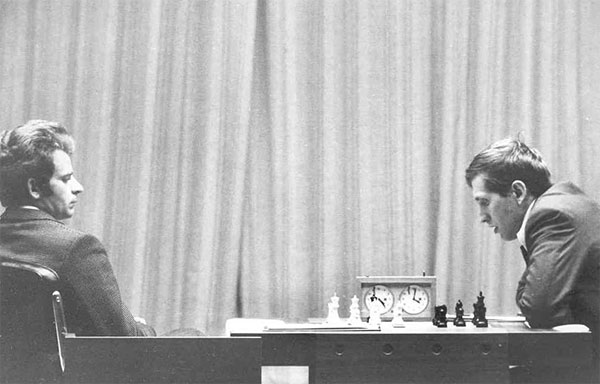 Fischer made a stubborn attempt to recover the point, but although he obtained a small advantage in the early middlegame he found no way to press it, even with the two bishops. The game was finally drawn. 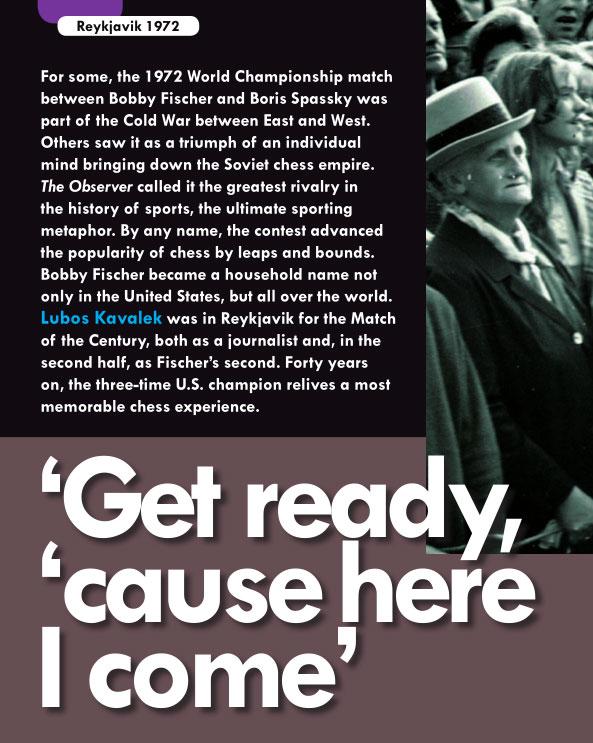 In the magazine New in Chess vol 6/2012, GM Lubomir Kavalek, who was in Reykjavik for the Match of the Century, both as a journalist and, in the second half, as one of Fischer’s seconds, describes what happened in the next game:

“Game 13 puzzled many players even after it was finished. It was an epic battle and, according to Mikhail Botvinnik, the patriarch of Soviet chess, Fischer’s greatest achievement in the match. ‘Nothing like this had previously happened in chess,’ Botvinnik said. His former world championship challenger, David Bronstein, played the game over many times, and it was an enigma to him. ‘Like a mysterious sphinx, it still teases my imagination,’ he said. The game had an unlucky number, and it had all the drama of a swing game. With a win, Spassky would shrink Bobby’s lead to a single point.

In Garry Kasparov On My Great Predecessors, Part 4 the 13th World Champion wrote: “After the confident draw by Spassky in the 12th game “Fischer realised that obstinacy was not a good thing, and he decided temporarily to give up the Sicilian. For the first time in the match he employed the Alekhine Defence, which was another unpleasant surprise for Spassky.”

Nikolai Krogius, assistant to Boris Spassky in his World Championship matches against Petrosian in 1969, and Fischer in 1972: “I will say frankly: no serious analysis of the variations for White in this opening had been made. This happened, because a number of experts, including Spassky himself, were convinced that Fischer was extremely constant in his opening tastes and that against 1 e4 he was unlikely to play anything except the Sicilian Defence.”

In the November 1972 issue of Chess Life & Review, which today has become the official magazine of the US Chess Federation Chess Life, GM Robert Byrne reporting from Reykjavik, wrote:

Game 13 was a rousing battle. Fischer sprang a surprise Alekhine Defense, rapidly seizing the initiative and snatching a pawn. Since Spassky did not like the looks of the position he would be forced into if he played to retake the pawn, he sacrificed it permanently, going all out for a Kingside attack. An inaccuracy by Fischer fueled the onslaught to alarming proportions but at the crucial point the champion vacillated, drifting into a pawn-down endgame.

That might, perhaps, have been the end of the story, except that Bobby took matters too lightly and blew the win a few moves before adjournment. When the game was resumed he put an incredible effort into the endgame, sacrificing a Bishop, allowing his Rook to be imprisoned and, in effect, going for a win with King and five pawns against King and Rook. Spassky’s draw was there but he was worn down after so many hours of play—he blundered’ at the 69th move and lost.

On August 11th 1972, exactly 50 years ago, the 13th game adjournament session ended and Fischer had restored his three-point lead.

Fischer vs Spassky – 50 years ago
7/11/2022 – Half a century ago, exactly on this day, the most famous chess match in history began: Boris Spassky vs Bobby Fischer in Reykjavik, Iceland. Five year ago we celebrated the event by reporting on it, game for game, as if it was all taking place live. Today we bring you links to all the reports we published at the time, starting with our full report on the drama that surrounded game one. It contains original film footage which nobody should miss.

Bobby Fischer in Iceland – 50 years ago
7/19/2022 – Fifty years ago, after the disaster he suffered in game one, Bobby Fischer was on the verge of abandoning the entire event and returning home. The challenger continued his vigorous protest, and when his demands were not met, Fischer did not turn up for game two. He was forfeited and the score was 0-2. Bobby booked a flight back to New York, but practically at the very last moment decided to play game three – in an isolated ping-pong room!

50 years ago today: Fischer-Spassky, game six
7/24/2022 – Today we offer readers a glimpse of what had been happening behind the scenes of “The Match of The Century”, especially in the Russian camp, exactly fifty years ago. A tense Boris Spassky, cajoled by seconds Efim Geller and Nikolai Krogius, nevertheless failed to perform, to the dismay of his friends and admirers. It’s also the story of a gamble that could have hurtled Bobby down the precipice in that fateful Game 6 of the match. A cautionary tale and object lesson for aspiring players.

Fifty years ago: Fischer leads 6½:3½
8/4/2022 – After the first two traumatic games World Champion Boris Spassky was leading 2-0 in the Match of the Century. But then Fischer started to play and struck back: in the next eight games he scored 6½ points, chalking up a 6.5-3.5 lead. Games 8, 9 and 10 were quite spectacular, and are the subject of today’s report – exactly fifty years after game ten. Younger players will also learn about “adjournments” and how exactly “sealed moves” were handled. Some were born after these practices were abandoned.

U.S. Championships: Niemann wins, claims he will not back down