In the French version of the Old Testament we read, as the equivalent of the eponymous title of this month’s column: voici l’hippopotame. Voici indeed!

I have just received a review copy of The Hippopotamus Defence by Italian IM Alessio de Santis, published by New in Chess. The Hippo was first promulgated in detail by the English amateur JC Thompson (who, surprisingly, receives no credit in the new book), widely regarded as an eccentric, but who has turned out to be something of a prophet. Sadly, as Jesus Christ pointed out, ‘verily I say unto you, no prophet is accepted in his own country.’

As it is, the prophet was right and the Behemoth has maintained a solid fifty percent for Black, even at the highest level of competition, and in one world championship match (Petrosian v Spassky 1966).

Alexander Tolush (1910-1969) was a strong Soviet Grandmaster. He played in the USSR Championship ten times, taking 2nd place behind Paul Keres, in 1950. In 1953, he took 1st place at Bucharest, ahead of Petrosian, Smyslov, and Spassky.

According to Bill Cash’s invaluable online information about the origins of the Hippo, the following year Tolush gave a simultaneous exhibition in England. One of the players was our eccentric prophet, John Crittenden Thompson (1889-1971) of Newcastle. Thompson liked unusual openings. His iconoclastic brainchild was 1. e4 Nh6 (or 1. d4 g6 2. e4 Nh6), which he called the Hippopotamus Defence. In 1957 he wrote a short pamphlet, entitled Hippopotamus Chess Opening. He used this opening when he confronted masters and grandmasters during simultaneous exhibitions, defeating grandmasters Tolush in 1954 and Janosevic in 1956 (but losing to Keres) with this strange defence. Thompson first called his opening (…Nh6 as Black and Nh3 as White), the Chinese Opening, but rejected it in favour of the hippo. In his eyes, the pawn structure resembled a sleeping hippo.

Here is how Thompson defeated Tolush , using the old hippo defence in a simul. It’s a wild game with chances for both sides. Thompson finally found a way to attack White’s king, threatening mate in the middle of the board.

The Hippopotamus Defence is just what players need who loathe memorising reams of opening theory.

It’s a straightforward and clear-cut defence that avoids the ever-growing body of mainline analysis. It’s flexible and universal: Black can use the Hippo against virtually all of White’s choices (1. e4, 1. d4, 1. c4, 1. f4, the Colle, London, Trompowsky, Réti and others). It’s relatively unknown and will surprise many opponents. It has been employed by Tony Miles and Boris Spassky amongst others and, as will be seen, I have come very close to using it myself.

On top of all that, the Hippo is seriously underestimated: with its characteristic double fianchetto it may look quiet, but inside there lurks a very dangerous animal. FIDE Master Alessio de Santis is one of the world’s greatest experts on the Hippo and has written a practical, well-structured and accessible manual. I strongly recommend it and I thoroughly concur with the verdict of British Grandmaster Glenn Flear:

’This work was little short of a revelation. In advance of opening it up I was expecting something superficial, but once I delved into those murky waters where Hippos dwell, I was impressed by De Santis’s application. Just about all plausible structures that White may try are anticipated, examined and, consequently, appropriate antidotes are advised. De Santis really has come at his subject from all conceivable angles to leave no stone unturned. Did you know that the hippopotamus is the most dangerous of all large animals? In chess opening terms, I would argue that it’s also the case.’

The King James Bible also concurs, attributing these characteristics to Behemoth: ‘He moveth his tail like a cedar, the sinews of his stones are wrapped together. His bones are as strong as pieces of brass; his bones are like iron.’

I have unwittingly tried the Hippo myself, though de Santis would doubtless describe my efforts as a Semi-Hippopotamus. The win in this game was instrumental in helping me to gain the gold medal prize on my board, representing England. 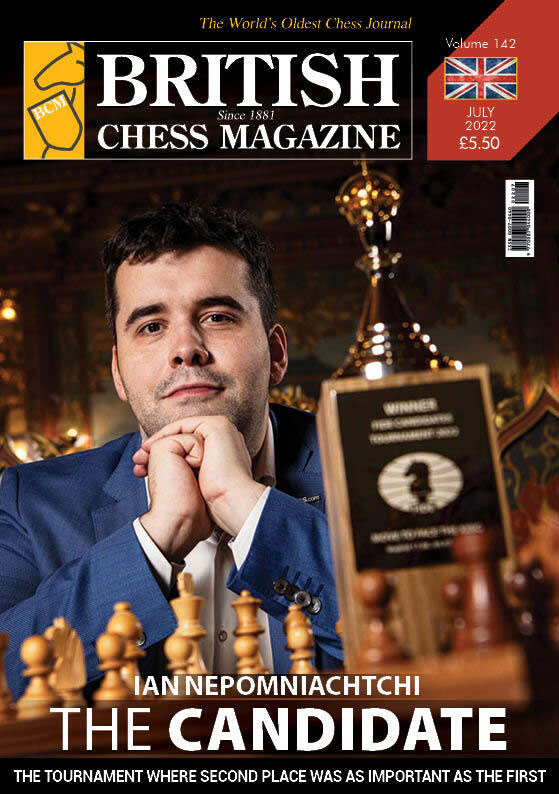 The above article appeared in the July 2022 issue of The British Chess Magazine, the world’s oldest chess publication. It is reproduced with kind permission.

Published monthly, each issue of The British Chess Magazine contains 64 pages packed with exclusive articles and annotations. You can buy a subscription (£55 per year, £4.58 per issue) or download a sample copy free.