Chennai R7: Armenia draws the US in dramatic match, keeps the lead

After six rounds, the participants at the 44th Chess Olympiad in Chennai were granted a rest day. On Friday, the tournament continued with the seventh of a total of eleven rounds.

Before the break, the Armenian team — without its former top player, Levon Aronian, who has transferred to the US federation — had defeated the in-form, youthful second team presented by India, and was thus the only team left with a perfect score. In sole second place was the United States, the heavy favourites to get the gold medal with their 2771 rating average.

The US had not really convinced in previous rounds, though. Paraguay, Israel and Iran were each beaten only by the smallest of margins, while Uzbekistan, led by an inspired Nodirbek Abdusattorov, had in fact managed to draw the Americans.

Thus, the top match in round 7 was Armenia against the US. Levon Aronian decided not to play against his compatriots and former colleagues.

Facing Wesley So, Hrant Melkumyan missed a decisive blow in what was actually a decent position, giving the USA an early lead. The refutation, which So found in a bit over a minute, was brilliant. It involved a magnificent tactical sequence of forcing checks.

Armenia’s top board Gabriel Sargissian levelled the score by beating none other than Fabiano Caruana. Peter Svidler, an 8-time Russian champion who is commentating for chess24, thus described Sargissian:

An absolute legend in team competitions! 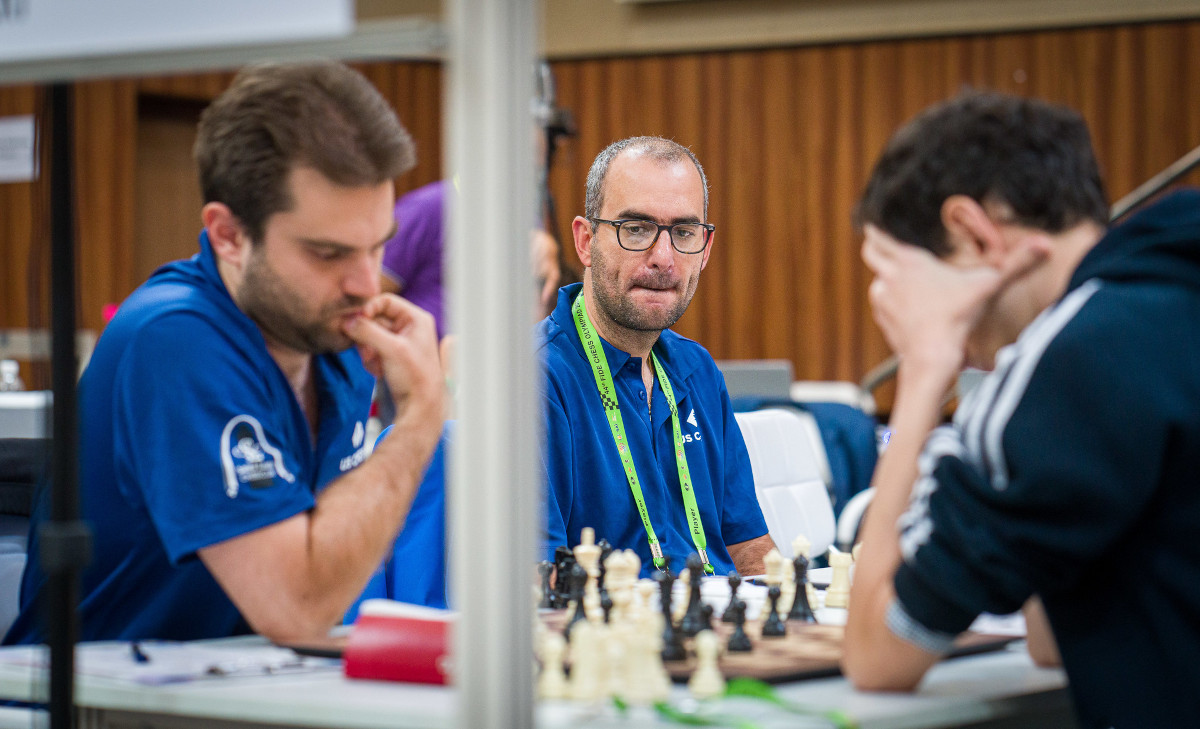 Leinier Dominguez recovered team USA’s lead by beating Samvel Ter-Sahakyan. The Cuban-born grandmaster has been impressive in Chennai, scoring four wins and two draws for a 5/6 score despite having played four times with the black pieces.

Given these results, the outcome hinged on the game between Robert Hovhanissyan and Sam Shankland, which took a dramatic course. Hovhannissyan got an advantage early on; as the game progressed, Shankland managed to equalize; and finally, when the engines were showing a 0.00 evaluation, the American touched his king after anticipating his rival would give a check on the first rank.

Since Hovhanissyan had not actually given the check, Shankland realized he had no choice but to resign the game. The one legal king move would have lost on the spot! Final score: 2-2.

Black played 90…Qg2, but apparently Shankland anticipated 90…Qh1. The former US champion touched his king, when the only legal move would be 91.Kc1, which immediately loses to 91…Qb2+. The American could not believe what had just happened.

Sam Shankland overlooked his opponent’s last move and replied with an illegal move; he thus had to play with the king, losing immediately. The United States missed out on a great opportunity to bring down the leaders, Armenia. #ChessOlympiad pic.twitter.com/uhdbFEPqMs

All three Indian teams in the open were among the squads that entered the round with 10 points (1 point less than the US). India 2, with Gukesh on top board, had the best tiebreak store and was paired up against Cuba, while the other two Indian teams had to face each other. The Indian derby went to India 1, with an unchallenged 3-1. India 2 won clearly against Cuba by a 3½-½ score.

In the all-Indian match, Arjun Erigaisi defeated Abhijeet Gupta when the latter incorrectly liquidated into a queen ending.

31…Qb8 or 31…Re7 would have been better for Black. 31…Rxe5 proved to be fatal, since there followed 32.Qxe5 and now d4 does not help Black to promote a queen as the white king can prevent it. 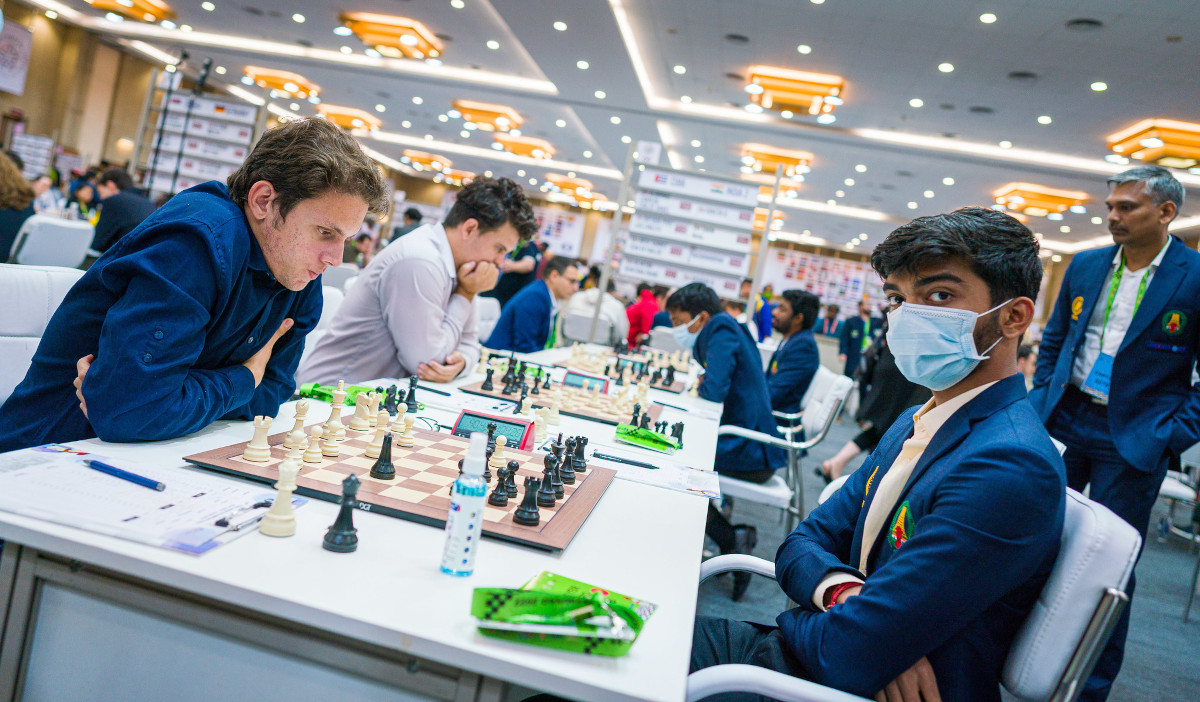 France is competing in Chennai with something resembling a B team — without Alireza Firouzja, Maxime Vachier-Lagrave, Etienne Bacrot nor Christian Bauer — but the team is still doing well. The Frenchmen solved all the easy tasks in the first three rounds with aplomb. Then they drew India and Poland before getting a narrow victory against Switzerland.

Strike first with the Scandinavian

The Scandinavian is a rarely employed opening on the hightest level und guides your opponent on much less familiar terrain than for example the Sicilian, French or any 1.e4 e5 system. After 1.e4 d5 Black fights for the initiative from move one.

In round 7, France faced the Netherlands, who had lost in round 4 against Israel. Maxime Lagarde scored for France, while Benjamin Bok equalized for the Dutch squad. 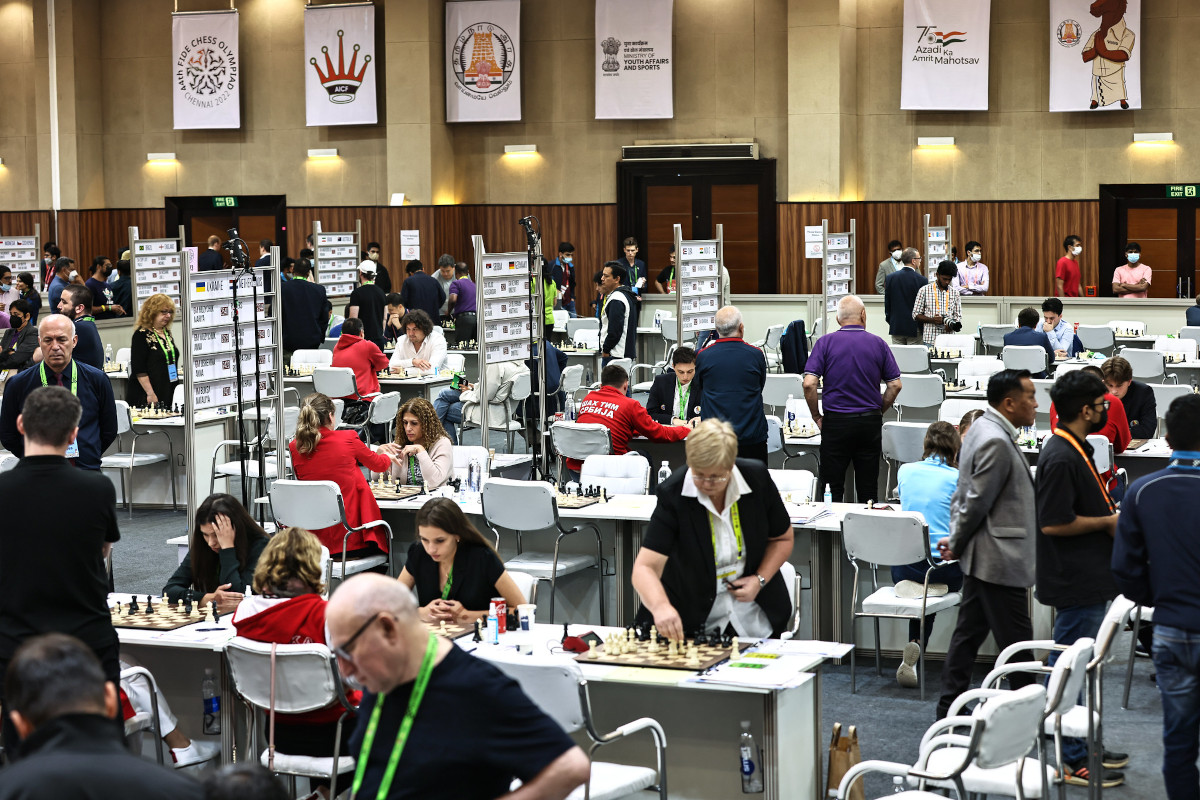 On board 4, the German team met Serbia. The Germans, ninth on the starting rank, had already suffered a defeat in round three, against Austria. Before the rest day, they scored a  somewhat lucky victory against Italy. Against Serbia, they had a rating edge on all boards.

Matthias Bluebaum and Liviu-Dieter Nisipeanu drew. Dmitrij Kollars was on the winning side with an extra pawn in a queen plus minor piece endgame, while Vincent Keymer had an extra queen against Aleksandar Indjic, but the lady was only good enough to fight for a draw in the endgame as she was facing a strong bishop pair and passed pawns.

Kollars won his game and Keymer held the draw, giving Germany a 2½-1½ victory. 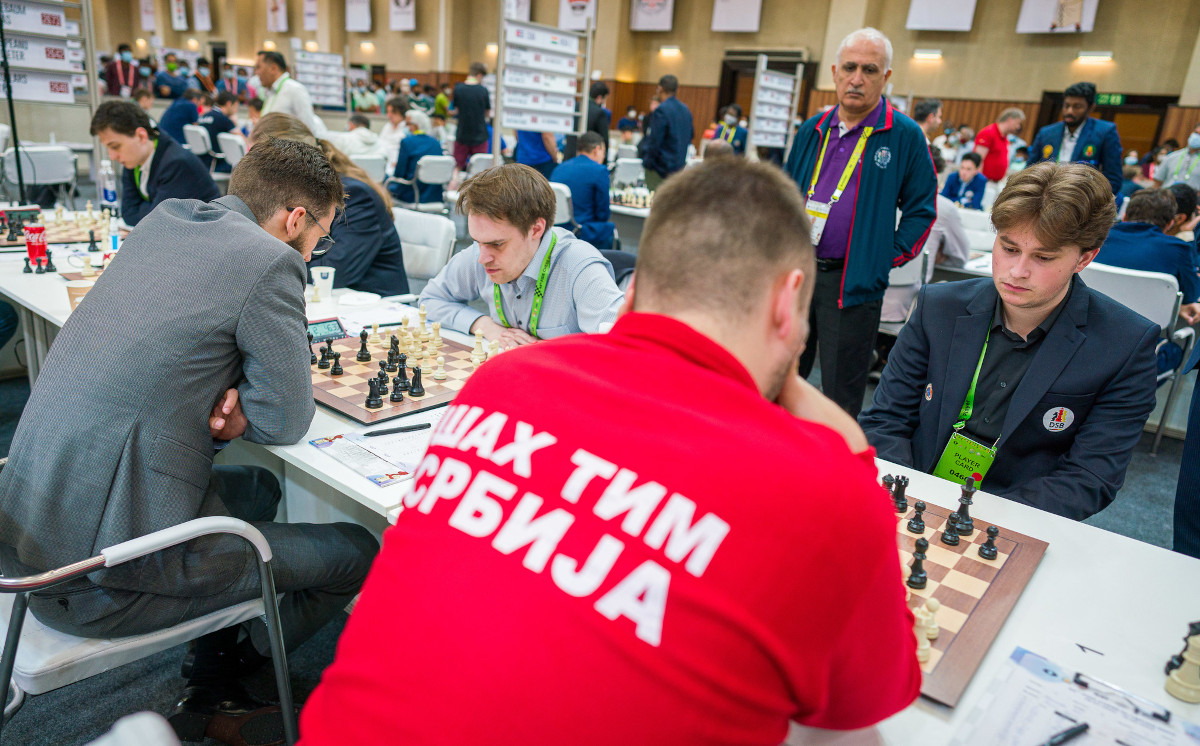 Uzbekistan and Kazakhstan also joined the chasing group, as they obtained wins over Peru and Spain respectively. Although Kazakhstan’s 2½-1½ victory is considered an upset rating-wise, it is not that surprising given how well the Kazakh squad has been playing throughout the event.

The host country is also represented by three teams in the Women’s Olympiad. India 1 is the rating favourite since Russia and China are not competing. After six rounds, the Indians led the field with six wins, followed by Azerbaijan and Romania, both only one point behind.

In the top match against Azerbaijan, the Indian women had to deal with their first individual loss in the whole tournament, as Humpy Koneru let go of a big advantage against Gunay Mammadzada and ended up losing the game. However, Vaishali and Tania Shachdev won their games to give India a valuable 2½:1½ victory.

A rook ending with 3 v 4 pawns on the same side is a draw. However, the defender must play correctly to save the point. 64.Rg8 is the correct way to defend here, but White blundered with 64.Re8. Vaishali seized her opportunity by playing 64…f5 65.Rg8 Kh3, and it was all over for White, since Black could safely invade with the king. 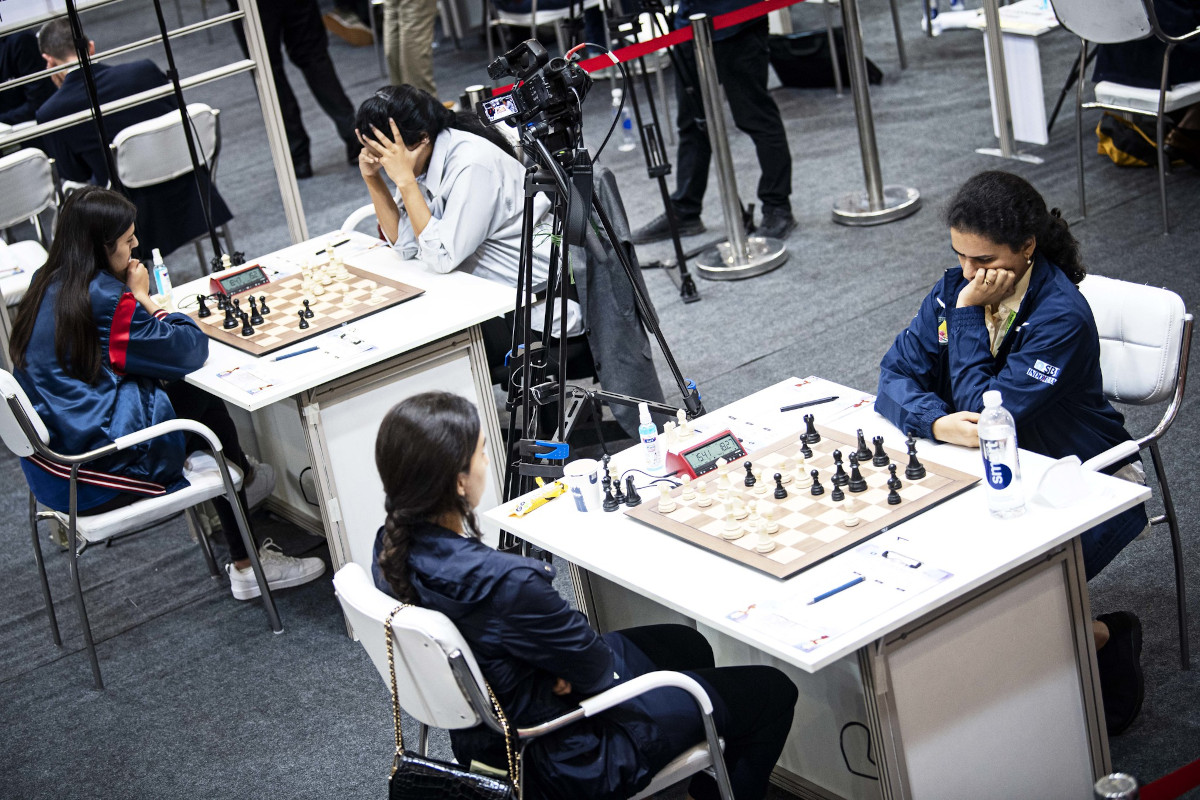