This was the stand in the Match of the Century in Reykjavik, fifty years ago, Fischer had lost the first game traumatically, defaulted in the second game. Trailing 0-2 in the match he picked up four points in the next five games. Spassky was deeply impressed by Fischer’s clean win in the sixth game, but he came back to game seven with resolve. He launched a very promising attack which unfortunately collapsed and had him fighting for a draw. 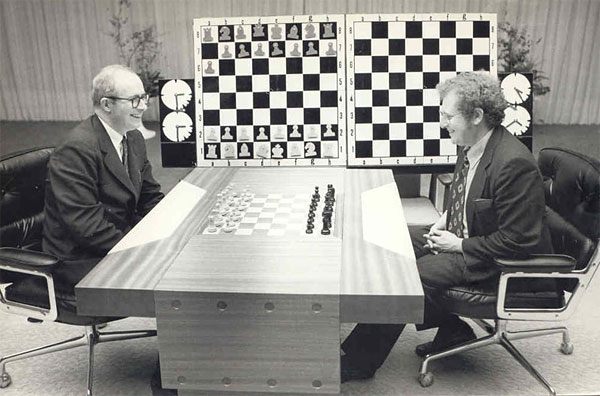 GM Robert Byrne with Chester Fox, who had the media rights for the match at the start, on the stage in Reykjavik

In Chess Life & Review October 1972, p.607, GM Robert Byrne, who was in Reykjavik reporting on the match, wrote:

By game eight the tension of almost continuous defensive play showed up in two Spassky errors. There is some question whether the first was a piece of mistaken judgment or an oversight, but the second was a naive blunder which denied Boris any chance to put up resistance. Otherwise, the game was notable for Bobby’s second use of a Queenside opening, the English. It would have been fascinating to see how he intended to proceed from the Maroczy Bind he had set up, but Spassky’s mistakes took the game out of normal channels.

Here are Byrne’s notes on game eight, as published in CL&R Oct. 1972, p.609. All analysis and material from Chess Life & Review appears courtesy of US Chess. 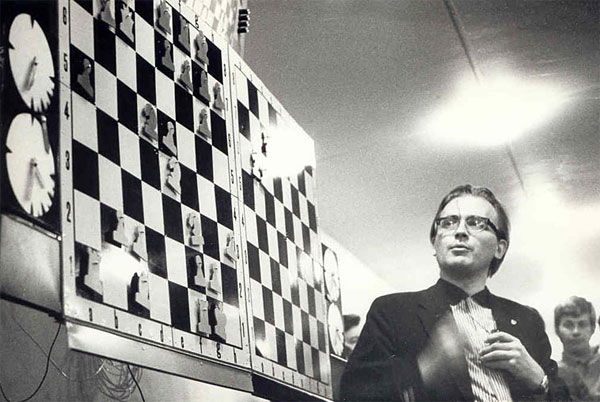 The legendary Bent Larsen, whom Fischer had demolished in the Candidates match in 1971, provided commentary for chess fans in Reykjavik

About the next encounter Robert Byrne wrote:

Game 9 was the shortest, quietest draw of the match so far. After the blunders of round 8, perhaps Spassky needed to demonstrate to himself that he could not be just bowled over. Many grandmasters aim for a draw in the next contest after a bad loss to fight the feeling that they will never do anything right again. Nevertheless, the opening is of considerable theoretical value, for Fischer introduced an enterprising pawn shot at his ninth move, transplanting an idea from the Gruenfeld Defense. Boris made some attempt to demonstrate weaknesses on Fischer’s Queenside, but without getting anywhere against Fischer’s accurate tactical defense. That left no other conclusion but a split point. 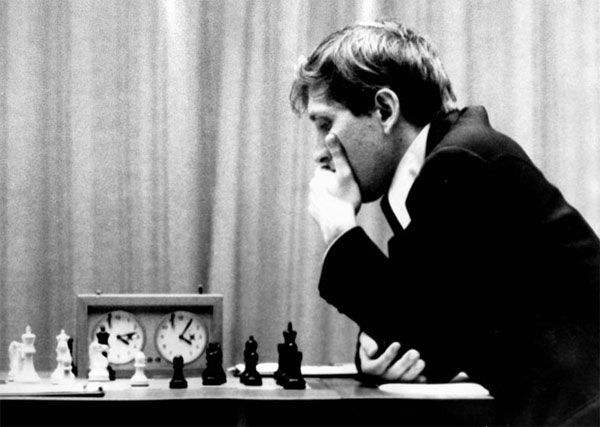 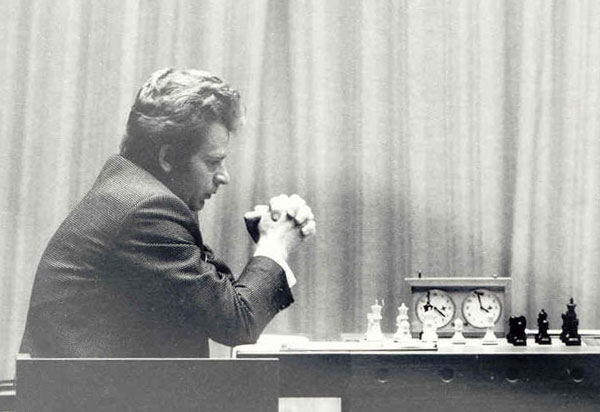 In Bobby Fischer against the Rest of the World Brad Darrach writes: “In the tenth game, nothing worked for Spassky. After an even opening, Bobby sprang a strong surprise attack. Spassky began patting his forehead lightly with a folded handkerchief. Bobby swung his chair from side to side and smiled. If he moved three games ahead, could Spassky play on? The crowd, disliking Bobby, admiring Spassky, did not want to see the blow fall but no one could look away. ‘There is a fascination in executions,’ Gligoric said. This one was slow but thorough.”

In Garry Kasparov on Fischer (My Great Predecessors Part IV) Kasparov writes: “In the 10th game the American reverted to his favourite 1 e4 and played, in my view, the best game of the match (I know that Bondarevsky was also of this opinion). This was a battle not for life, but to the death, and Black also fought worthily. This is why I rate this game higher than the 6th: here there was more of a fight, more resistance!”

Spassky’s second Krogius said: “After Boris’ defeat in the 10th game, the anxiety in Moscow increased sharply… The directors of the USSR Sports Committee and the Chess Federation suggested that I should fly to Moscow for 2-3 days, to explain Spassky’s poor play. Fortunately, for me, Boris categorically rejected the suggestion. What would I have said to our sports directors? There was no point in crying over spilt milk. There were hopes of revival by Spassky, and the opportunities for this, if they existed, lay in Reykjavik, and not in Moscow.”

Brad Darrach tells us that during this game two Icelanders, a father and son, observed a man who had been conversing in Russian sitting close to the stage. When the game started he took something out of his pocked and put it into his mouth. “Then a thin rigid tube emerged between his lips and pointed towards the players.” Whenever an Icelandic policeman strolled by the tube was instantly drawn back into the man’s mouth, and when the policeman was gone it reappeared. The Icelandic police investigated, but the perpetrator (and two apparent assistants) disappeared after the game, and were soon recalled to Russia. It was speculated that they had launched an attempt to disturb Fischer with a high-pitched whistle, one that was not normally audible to the human ear. But Bobby was said to have hyperacusis, an increased sensitivity to certain frequencies. All of this is speculation, but it is plausible as hell. 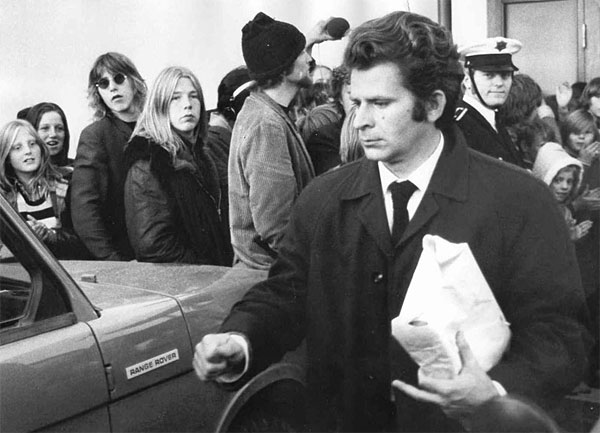 Here are the times for the three games, as recorded by Lawrence Stevens, who visited the match in Reykjavik and jotted them down from the video screens:

Some of our younger readers – including grandmasters in their early teens, whose parents were probably not born yet when all of the above transpired – may not be familiar with adjournments in chess. The rules that were in place at the Reykjavik World Championship are described in full detail by Lawrence in his Crack Team blog:

In the days of adjournments, the arbiter would, at the correct time, inform the player on the move that his next move is to be a sealed move. This means that, after due reflection, instead of making his move on the board, the player writes his move in private and puts it into the arbiter’s envelope, and seals it. The arbiter records the clock times and the position, typically on the outside of the envelope, for the game’s later resumption. The arbiter then impounds this envelope, maintaining custody until the game is resumed. When the game is resumed, the arbiter prepares the clocks and board, opens the envelope, plays the sealed move, and then presses that player’s clock to start the new session of play.

When does the arbiter prompt a player to make the sealed move? At the end of the playing session. In this case, when both players have completed at least 40 moves, AND five total hours have accumulated on the player’s clocks. If both players have completed 40 moves, and five hours have not yet accumulated, then the player to move can control the situation, using it to his advantage.

If that player wants to seal his next move, he can decide on it and then just wait until the arbiter prompts him to do it. Actually, if the player knows his next move and does not want to wait, he can ask the arbiter for the envelope, seal his move, and the arbiter will deduct time off his clock to complete the necessary five total elapsed hours. This extra elapsed time is seen on the clock when the game is resumed.

Instead, if the player wants his opponent to seal the move, he can decide on his own move and wait until just before the five hours is finished. Then he makes the move. The opponent now has to either move before the session ends, or be prompted by the arbiter to seal his move.

The games of the match began at 5 PM, and the adjournments began at 2:30 PM the next day. The first session was 5 hours, and the following sessions, if necessary, were 4 hours, with a time control of 16 moves per hour. Thus time controls were at move 40 in the first session and at moves 56 and 72 in the second session. No game extended into a third session in this match.

Fischer vs Spassky – 50 years ago
7/11/2022 – Half a century ago, exactly on this day, the most famous chess match in history began: Boris Spassky vs Bobby Fischer in Reykjavik, Iceland. Five year ago we celebrated the event by reporting on it, game for game, as if it was all taking place live. Today we bring you links to all the reports we published at the time, starting with our full report on the drama that surrounded game one. It contains original film footage which nobody should miss.

Bobby Fischer in Iceland – 50 years ago
7/19/2022 – Fifty years ago, after the disaster he suffered in game one, Bobby Fischer was on the verge of abandoning the entire event and returning home. The challenger continued his vigorous protest, and when his demands were not met, Fischer did not turn up for game two. He was forfeited and the score was 0-2. Bobby booked a flight back to New York, but practically at the very last moment decided to play game three – in an isolated ping-pong room!

50 years ago today: Fischer-Spassky, game six
7/24/2022 – Today we offer readers a glimpse of what had been happening behind the scenes of “The Match of The Century”, especially in the Russian camp, exactly fifty years ago. A tense Boris Spassky, cajoled by seconds Efim Geller and Nikolai Krogius, nevertheless failed to perform, to the dismay of his friends and admirers. It’s also the story of a gamble that could have hurtled Bobby down the precipice in that fateful Game 6 of the match. A cautionary tale and object lesson for aspiring players.

Game of the Week #527: Caruana vs Abdusattorov

Denver Nuggets Could Get Murray & Porter Jr. Back For Postseason