The Origin of Chess

When I talk about the origin of chess I often say something outlandish, like “Chess was invented on the first weekend in September of the year 568, by a counselor at the court of the regional king, in the north-western part of India.” This is of course a flippant statement – I say it just to provoke historians who, for decades, have been trying to trace the origins of chess to Russia, China, India, Central Asia, even ancient Egypt.

There is an often-shown picture that seems to show an Egyptian lady clearly engaged in playing chess. 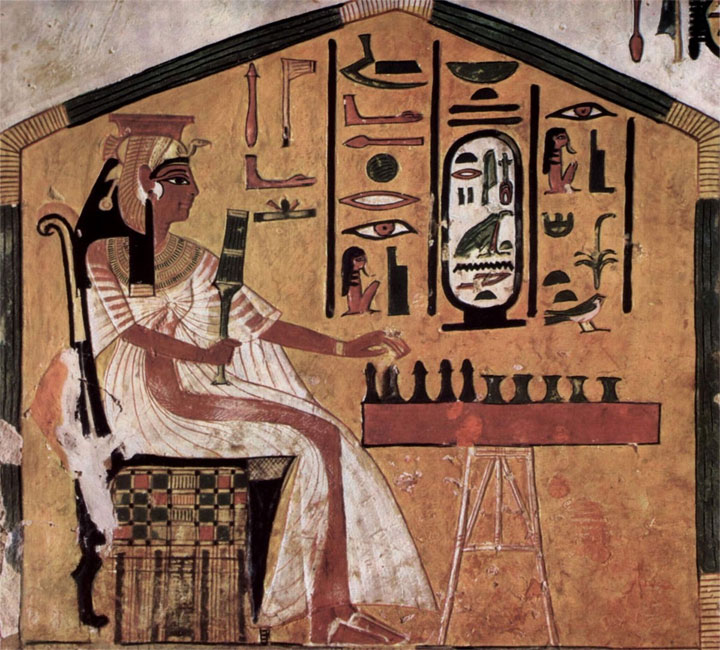 It is a picture of the celebrated Egyptian queen Nefertari, the favourite wife of Pharaoh Ramses II, who reigned from 1279 to 1213 B.C. 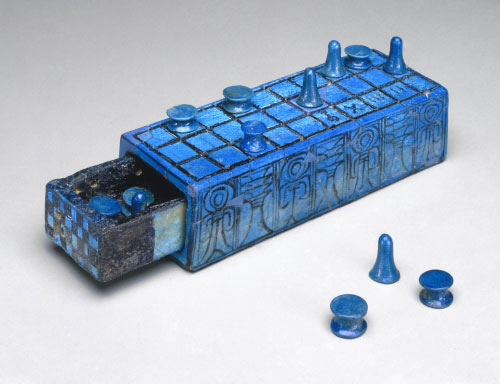 But is she really playing chess? She could be rearranging bottles of perfumes, but more likely she is playing Senet (or Senat), a board game that was known at the time. It looked like this. It had 30 squares, arranged in three rows of ten, and two sets of pieces, probably five for each side (the rules of the game are not completely clear).

I say the game of chess was invented by a single person (or a small group of people) in a short period of time because I can vividly imagine them sitting around designing it. I can imagine them saying: “We need a king who rules everything, and his counselor. And how about elephants and horses and chariots as part of his army? Of course he must have foot soldiers he can move into combat…” They devised the rules and came up with a game they called “Chaturanga,” which is Sanskrit for “four limbs,” the branches of the army.

Chaturanga is very clearly an early version of chess. If you saw the game being played in the 6th century you would immediately identify it as chess – even though some of the rules were slightly different. The elephant (bishop) and the counselor (queen) had very restricted mobility. The rules evolved over the centuries, during wwhich time Chaturanga, which changed to “Shatranj”, and then to chess, migrated to the West to become one of the world’s most popular and beloved games.

Today it is estimated that over 800 million people around the globe, or around 8% of the world population, play it regularly. In western countries like the US, UK, Europe and Russia, around 70% of the adult population has played chess at some point in their lives. The inventor of the game could not have imagined how popular it would become and how long it would endure. It was pure luck.

The names of the pieces changed. The elephant stayed elephant (slon) in Russian-speaking countries (where you can witness a brilliant sacrifice of elephant takes h7!), but became the runner (Läufer, loper, leefer, etc.) in central Europe, a bishop in the English-speaking world, a gunner (alfil) in Spain and a fou (fool or jester) in France. Here’s a nice overview provided by Danial A in Wiki (click to enlarge): 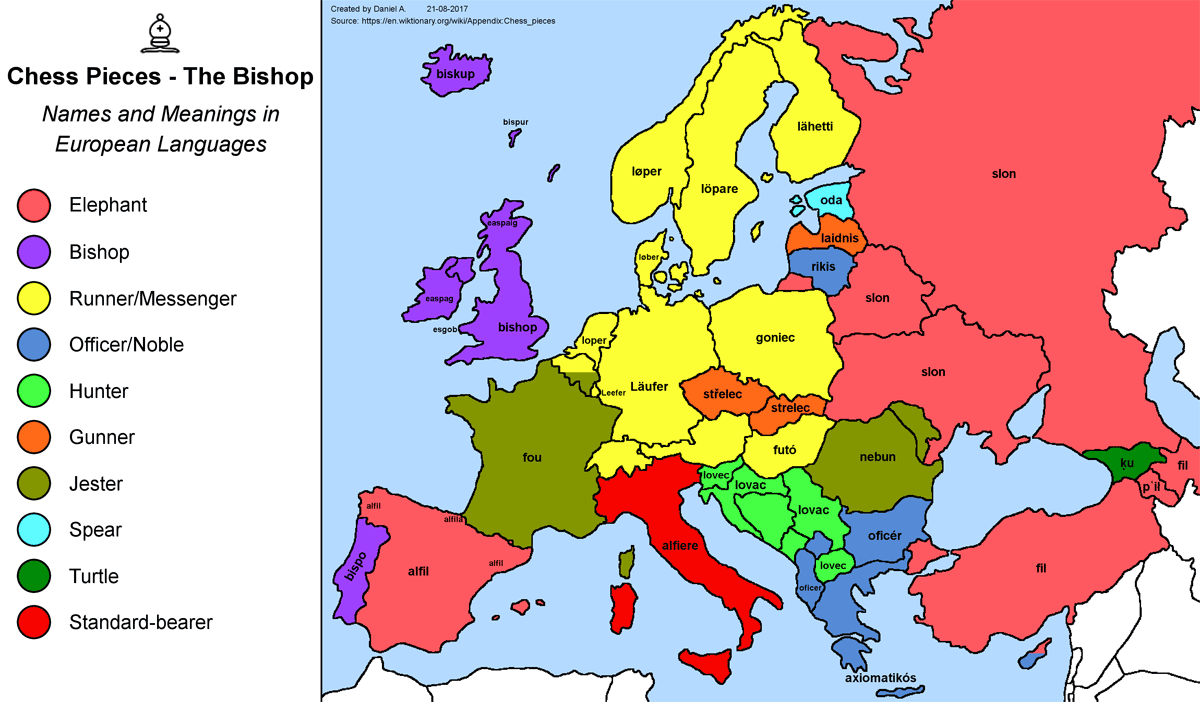 After its invention chess spread from India to Persia, and entered the Muslim world when Arabs invaded and conquered Persia. Chess subsequently spread to Spain and the rest of Southern Europe. The rules were modified and it slowly evolved to its current form, by about 1500 AD.

In China, a millinium ago, people started playing a strategy game derived from chaturanga. It turned into the game xiangqi, which is played today. We call it Chinese Chess or Elephant Chess. It borrowed from the game of Go, which had been played in the country since the sixth century BC. The pieces are placed on the intersection of the squares, and not within them. The object of xiangqi is similar to chess: to trap the opponent’s king.

Chess was brought to Old Russia in 9th and 10th century. It enjoyed a very high status and was played in the court – Ivan IV the Terrible, who ruled the country from 1530 to 1584, is said to have died while playing the game. In the 20th century chess. became a school subject in all primary schools in Russia, which rapidly became the super-power of the game. Today it has well over 200 grandmasters, followed by Germany and Ukraine with around 70 each. Incidentally, the highest density of GMs is to be found in Iceland, where around 0.000035% – 35 per million – of the population have the title.

While all this was happening India slumbered blissfully. It was a second-rate chess country. There were a couple of modest IMs and some strong players, but nothing more. I remember how in the 1970s I was invited to stage a clock simul in Bangalore, India. I asked (German) GM Helmut Pfleger if he would do it, and he readily agreed. “What must be the maximum strength of your opponents?” I asked him. In clock simuls it is normal to keep restrict the level of the opposition. “Oh, don’t worry,” said Helmut. “They can select anyone.” He knew that he would have no trouble with even the strongest eight Indian chess players.

That has changed radically over the last decades. “Helmut,” I said recently in a phone conversation, “I have a 12-year-old here. Would you like to play a game against him?” He knew I had Gukesh in the house and replied: “Oh, that could be really tough for me.”

The big change for India came when a boy from Tamil Nadu, India, Vishwanathan Anand, showed extraordinary skill in the game. In 1988 he became the first Indian grandmaster, and went on to win five World Championship titles. Anand galvanized his compatriots to take up the game.

This they did with a vengeance. Kids all over the country started playing, studying hard “to become like Anand.” And they started to get really strong. Grandmasters kept popping up, and today there are around 70 players who have the full GM title. Anand – now in his early fifties, is still playing in top tournaments, cheered on by over a billion fans. 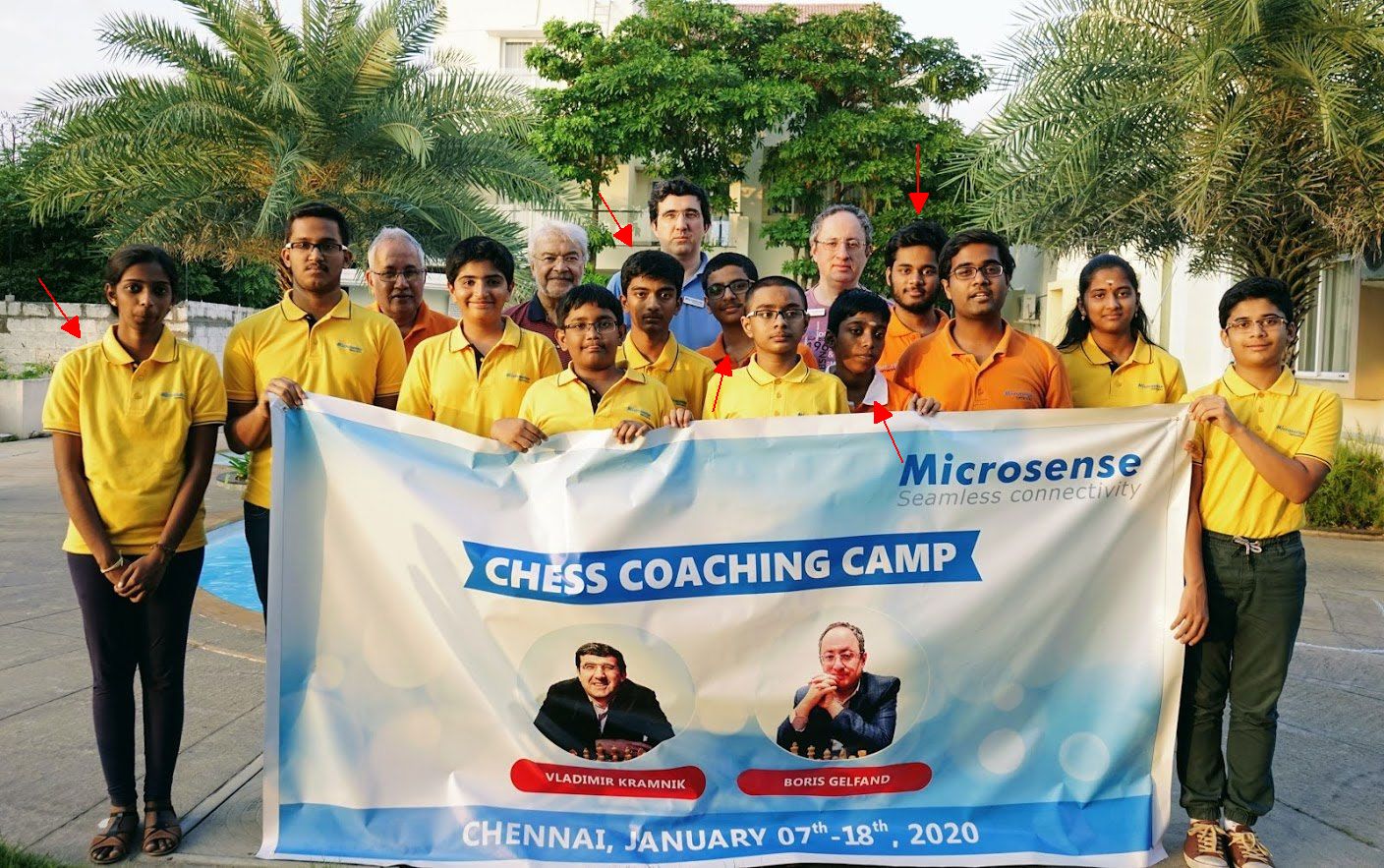 Training camp with Kramnik and Gelfand in Chennai, 2020. I have marked five players (Vaishali, Gukesh, Raunak, Pragg, Arjun) who are going for Gold at the current Olympiad.

India, I predict is on its way to becoming the ultimate super-power of chess. I recently attended two training camps in which Vladimir Kramnik, and then Kramnik and Boris Gelfand, worked with young Indian talents, 12 to 16 years old, all with GM titles or at least GM norms. It was breath-taking to watch how a boisterous 13-year-old, at one moment, is running around the playground, chasing a football, and then suddenly engages in discussion with a former World Champion, on the lines: “In yestereday’s analysis what if White plays this, this, this, this, this, this, this, this, this, and then launches a kingside attack?” To which Kramnik replies, “that is very interesting. We should look at it in this evening’s session.” All without a chessboard in sight.

During my visit in Chennai I was interviewed by a news portal who wanted to know my opinion on the future of chess in India. I told them that I believed that in five to ten years at least 25% of all international tournament players would be from India; that 25% of the top 100 players would be Indian; that there would be three Indian grandmasters in the top ten of the world. “Aren’t you exaggerating?” the host said. “Three in the top ten? How can you predict that?” – “I’m pretty sure I’m right,” I said. “In fact I can give you their names today!” 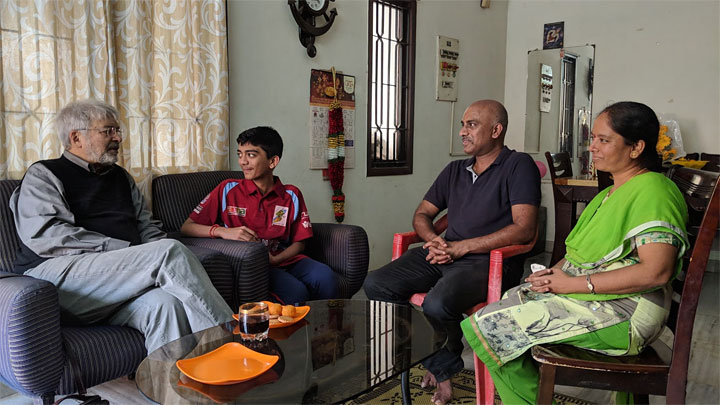 … who in April that year, together with two other young talents (Savitha and Siddarth) got endgame training with Dr Karsten Mueller in the ChessBase office in Hamburg.

Since that time, January 2020, young Indian super-talents, who are apparently grown in paddy fields, have done everything they could to bolster my prognosis. As I write these lines I see that Gukesh has won his sixth game at the Olympiad in Chennai, against a 2700 grandmaster and has climbed to a live rating of 2719. And the Indian Women’s team has just beaten the very strong Georgian team to lead their section with a 12/12 dry score.

No, they will never catch up. There are two specific reasons for that. On the one hand they do not have a chess god (India has Anand); and they have a rival game. A vastly greater majority of the population play Elephant Chess than the western game, the one that is played by all Indians who are drawn to strategic games. India has a much bigger population base for chess than China.

So what we can do is to sit back and watch Indian chess unfold. In some ways it is justified: that the country that invented the game so many centuries ago should take the lead in this wonderful game.

REPORT: NBA Has A New Format For Rising Star Game