Chennai R4: Uzbekistan draws the US as Abdusattorov beats Caruana

Monday’s round in Chennai was certainly eventful, as many rating underdogs either beat or drew their nominally strong opponents. Once the dust had settled, five teams remained on top of the standings with 8 match points: India 2, Armenia, Israel, England and Spain. Given the non-attendance of Russia and China, these (and other) traditionally strong chess countries — albeit not as strong as the absentees — have a great chance to collect medals.

As noted in our tournament’s preview, the United States, with the addition of Levon Aronian to their already formidable lineup, arrived in Chennai as clear favourites. However, they have already stumbled in round 4, as Uzbekistan’s young squad held them to a draw. Thorsten Cmiel had warned us about the potential of the Central-Asians, which fielded players aged 17, 20 and 16 on the top three boards on Monday.

While the implacable Wesley So beat Javokhir Sindarov with white on board 3, it was world rapid champion Nodirbek Abdusattorov who was the star of the day for the Uzbeks, as he took down world number 5 Fabiano Caruana on top board.

True to his style, Caruana played dynamic chess throughout, looking for the initiative at the expense of losing a pawn or two. Abdusattorov responded in kind, finding one precise move after the other until reaching this position with two extra pawns.

At this point, it is White who needs to be meticulous to keep the balance, and Caruana failed to notice that 44.Rd7 was the best alternative here, preparing to give a check from d6 to keep the tension in the position. His 44.Qxf5 gave Black a tempo to activate his pieces and later force a queen exchange, which left him in a winning rook endgame with two extra pawns.

Abdusattorov gained 6.3 rating points in this game alone, and has collected a total of 12.9 in the Olympiad. He is currently the fourth highest-rated junior player in the world, with a remarkable 2689.9 Elo rating — doubtlessly, this is a strong generation of players! 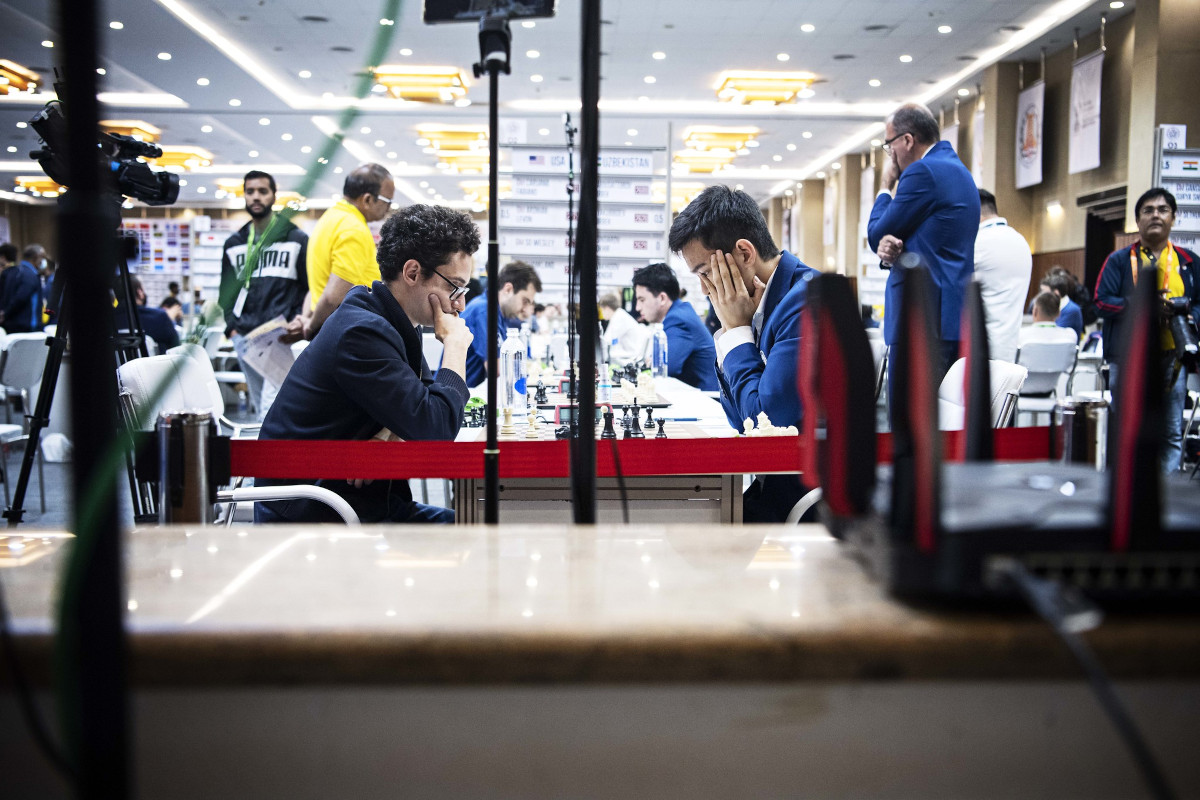 Things could have gone even worse for team USA, as Jakhongir Vakhidov failed to convert from a completely winning position against Sam Shankland on board 4.

Shankland saved the draw from a position which might have even been resignable for other strong grandmasters. Of course, that is why players continue making moves in losing positions in team tournaments. 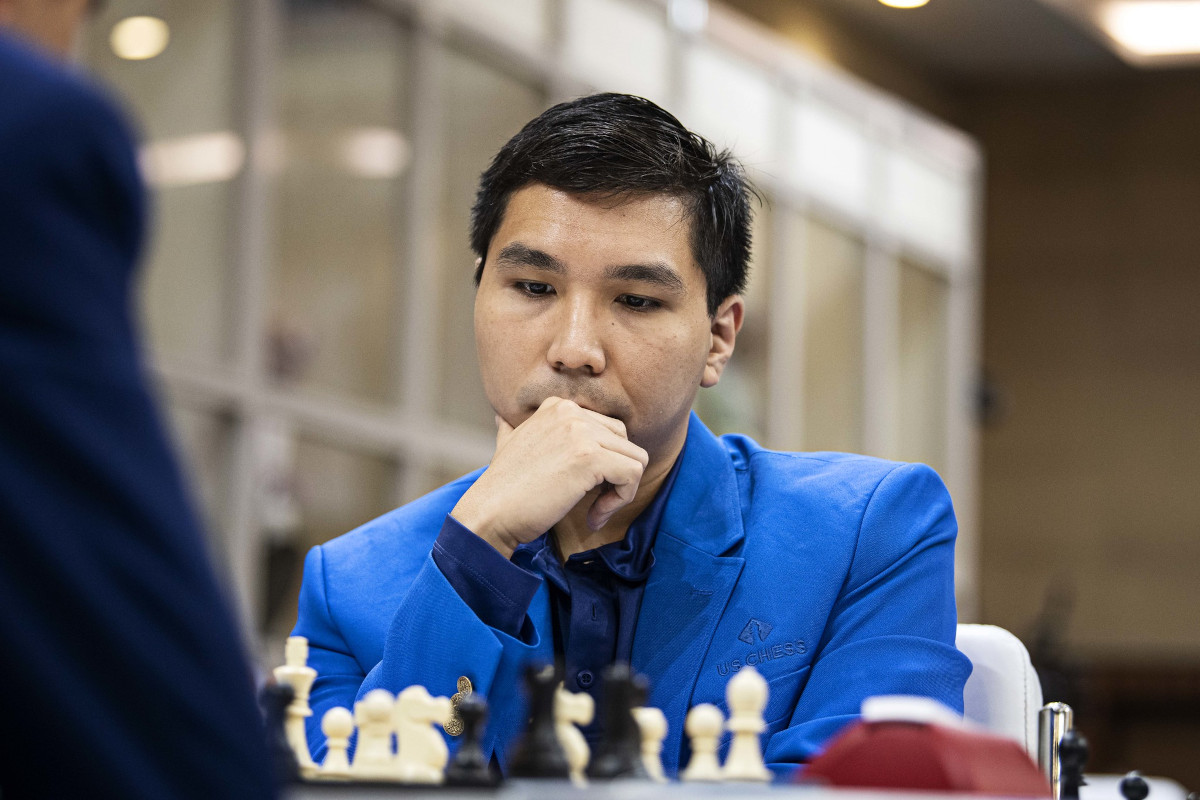 Wesley So has won his two white games in Chennai | Photo: Stev Bonhage

The young players who make up India’s second team continue to impress in Chennai. They had a perfect 12/12 on individual games until round 3, and continued their great run of form by beating Italy by a convincing 3-1 score in the fourth round.

We mentioned above that Abdusattorov is the fourth highest-rated junior player in the world. Above him stand two absentees in Chennai — Alireza Firouzja (1st) and Andrey Esipenko (3rd) — and Gukesh (2nd), who is having a remarkable year. The Indian rising star is playing in his hometown, and has collected four wins in as many games so far in the Olympiad.

Gukesh beat Daniele Vocaturo on board 1 of the India 2 vs Italy match. Vocaturo came from drawing world champion Magnus Carlsen in the previous round.

White is winning here, and Gukesh found the most efficient way to wrap up the game — 29.Bxf7+ Kf8 30.Bh5, planning to increase the attacking power with Qg6 later on.

Nihal beat Luca Moroni with black on board 2. The 18-year-old also has a perfect score so far in the tournament. 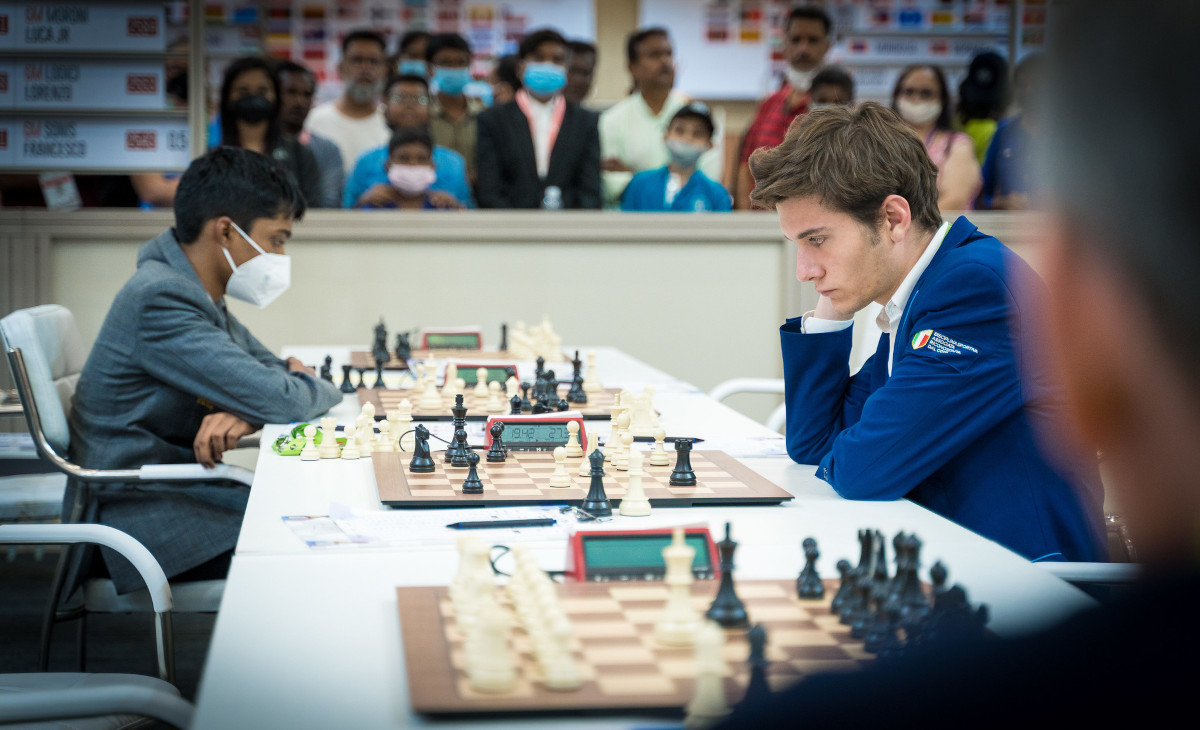 The team with the lowest rating average among the co-leaders is Israel. Fielding a lineup with experienced players, the Israelis upset the Netherlands in round 4. The one decisive game of the match was seen on board 3, where 54-year-old Ilia Smirin defeated Erwin l’Ami with the white pieces.

Material is even, but White has the extremely dangerous pair of rooks on the seventh rank. Engines think Black’s best alternative here is 28…Rxa7, but it is somehow understandable that L’Ami went for 28…Rb6 instead, trying to keep more pieces on the board to keep better chances of creating complications.

Smirin was ruthless in conversion, though, as he obtained a 49-move victory which kept his team’s ambition to leave Chennai with a medal very much alive.

India 2 vs. Italy / Israel vs. Netherlands

The United States’ team was not the only one suffering against lower-rated opposition in the fourth round. Other remarkable upsets are listed below: 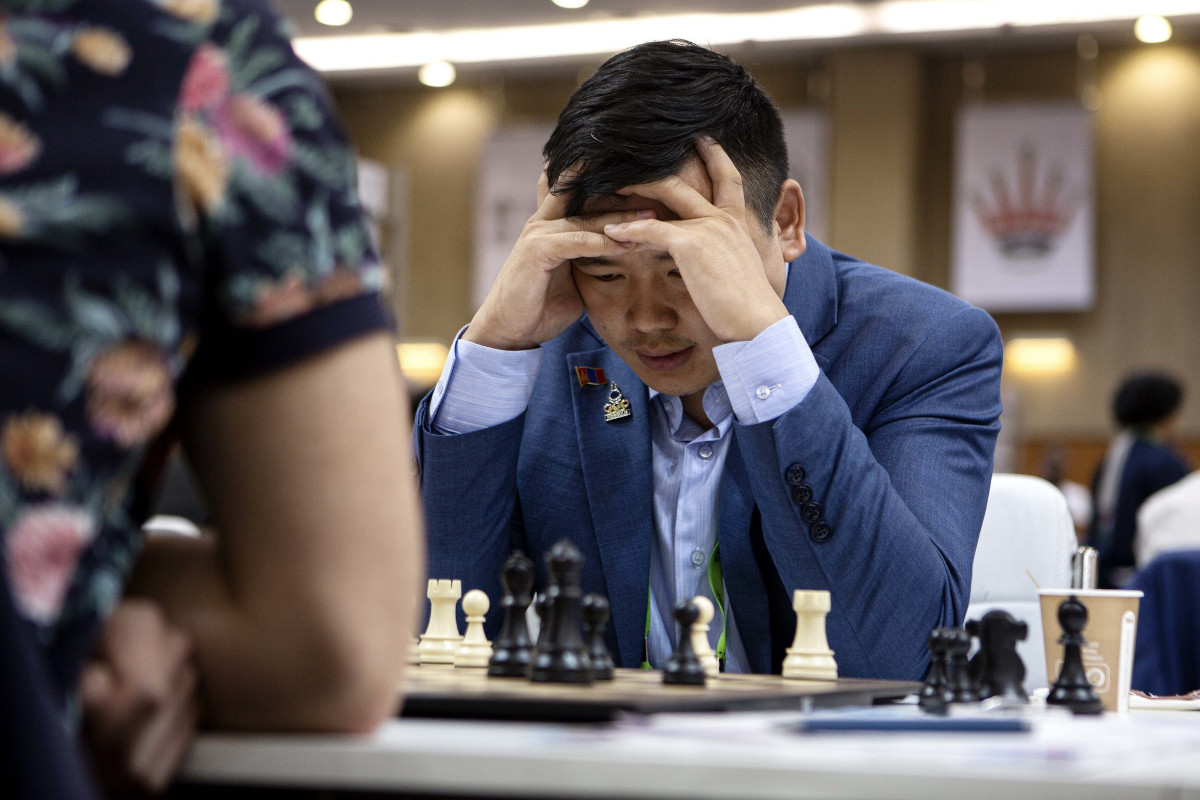 Eight co-leaders in the women’s section

Rating favourites had a better day in the women’s tournament. Out of the eight teams sharing the lead on 8 out of 8, six are among the top-10 in the starting rank. Only India 2 (11th seeds) and Romania (20th) do not meet this criterion.

The Romanians, led by Irina Bulmaga, defeated the eight seeds from Germany in round 4, with wins by Mihaela Sandu and Alessia-Mihaela Ciolacu on boards 2 and 3 respectively. Ciolacu (rated 2163) outplayed Hanna Marie Klek in a rooks and knight versus rooks and bishop endgame. GM Karsten Müller analysed the position and shared instructive advice. 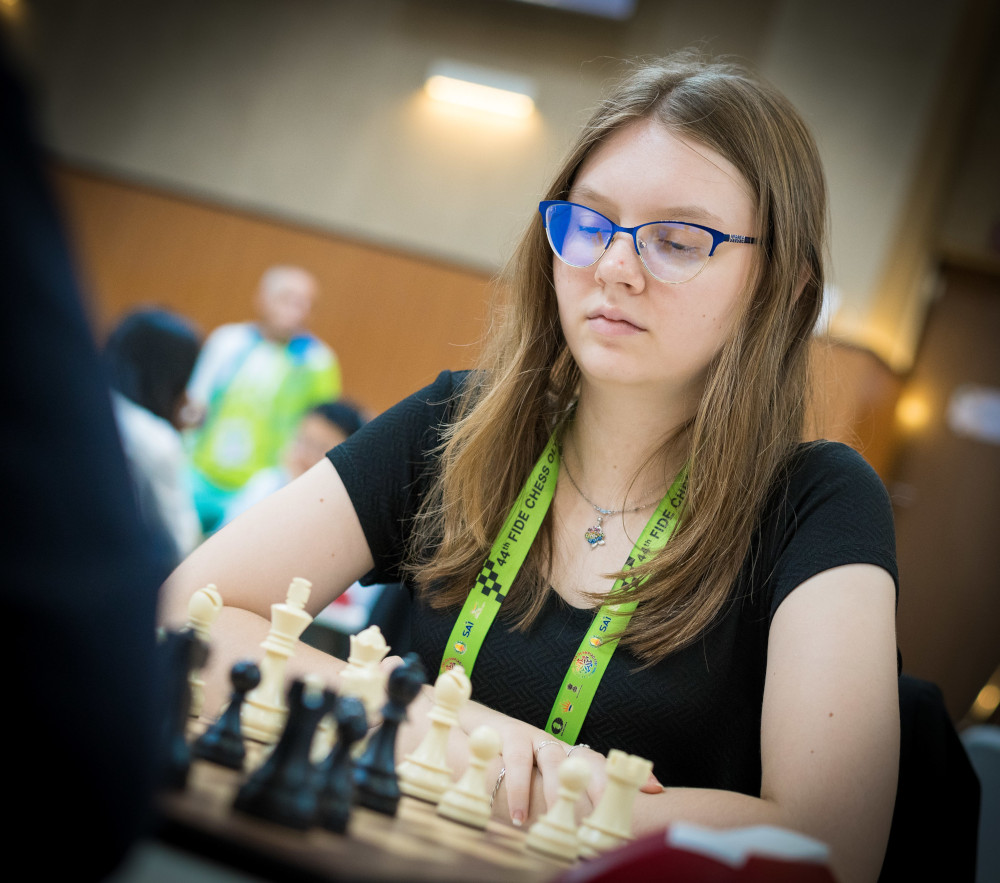 Much like their male counterparts, the women’s squad from Mongolia grabbed a crucial draw against a strong team in round 4, as they traded wins on boards 2 and 4 with the tenth seeds from Kazakhstan. Davaakhuu Munkhzul defeated Nazerke Nurgali with the black pieces.

White has a bishop for two pawns, but Black’s passer in the centre and the white king’s vulnerable position mean Nurgali needs to find precise defensive resources to keep the balance. The one move that draws for White here is 35.Rxf7, while Nurgali’s 35.Bg4 loses to the subtle 35…Qe4, which the Mongolian found in less than a minute.

If White had tried to save her bishop, mate would have followed quickly — e.g. 36.Bh3 Qd3+ 37.Ka4 Qxc4+ and mate next move. In the game, the Kazakh WIM went for 36.Bxe6, giving up her bishop, and resigned four moves later. 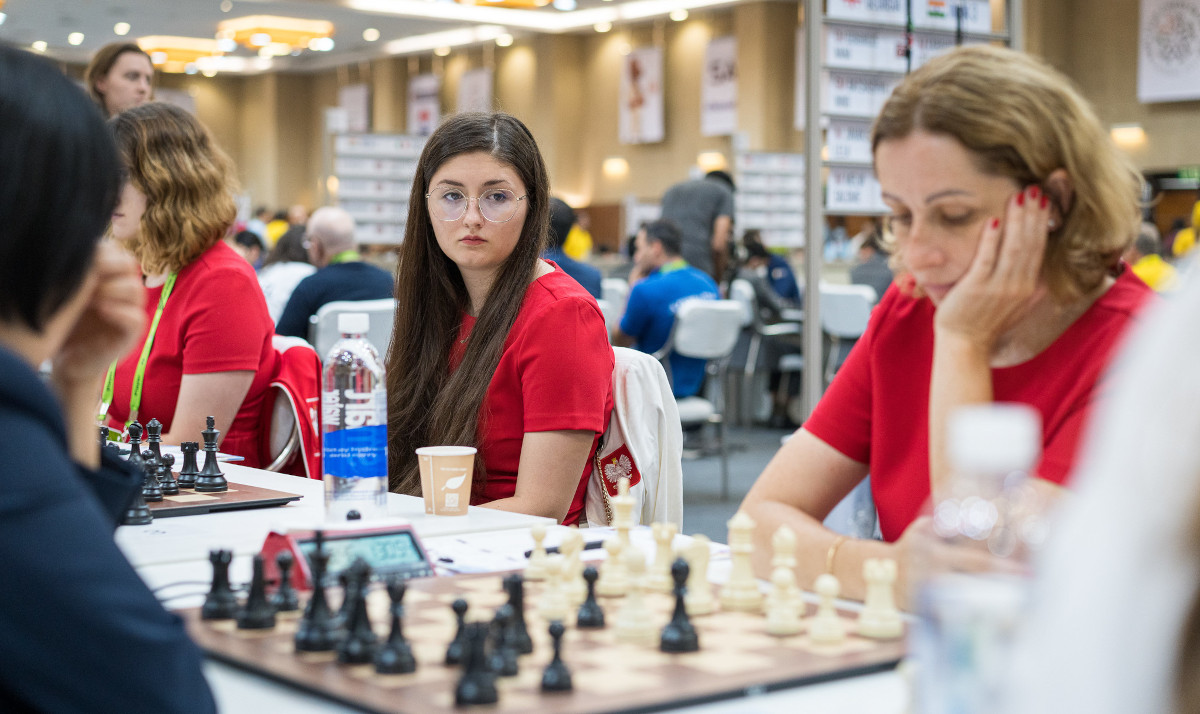 Romania vs. Germany / Mongolia vs. Kazakhstan

BLACKPINK’s Back and We’re All Beyond Hyped!

BLACKPINK's Back and We're All Beyond Hyped!