After three rounds, there are 20 teams that have won all their matches in the open section of the Chess Olympiad in Chennai. Topping the list, with a perfect 12 out of 12 score in board points, is the second team from India. The squad consists of four very young talents, joined by the ever-dangerous Adhiban. In round 4, they will face Italy, which will be in high spirits after having defeated the Magnus Carlsen-led team from Norway.

India 2 beat Switzerland 4-0 on Sunday, but only after Praggnanandhaa turned the tables in his board-1 game against Yannick Pelletier. The Swiss grandmaster got a big advantage early on, with his safer king and better structure. By move 40, it seemed only a matter of time before he would break through Pragg’s defences.

Pelletier here played 41.Bxd6, which is completely acceptable. However, 41.Bh5, harassing the rook was a better alternative, as Black will need to make major concessions in order to save both the exchange and the pawn on h7.

Things began to go downhill for the Swiss from this point on. The fact that the 16-year-old Pragg managed to win the game eventually is a testament to his fighting spirit and incredible resilience — two youthful characteristics, indeed. 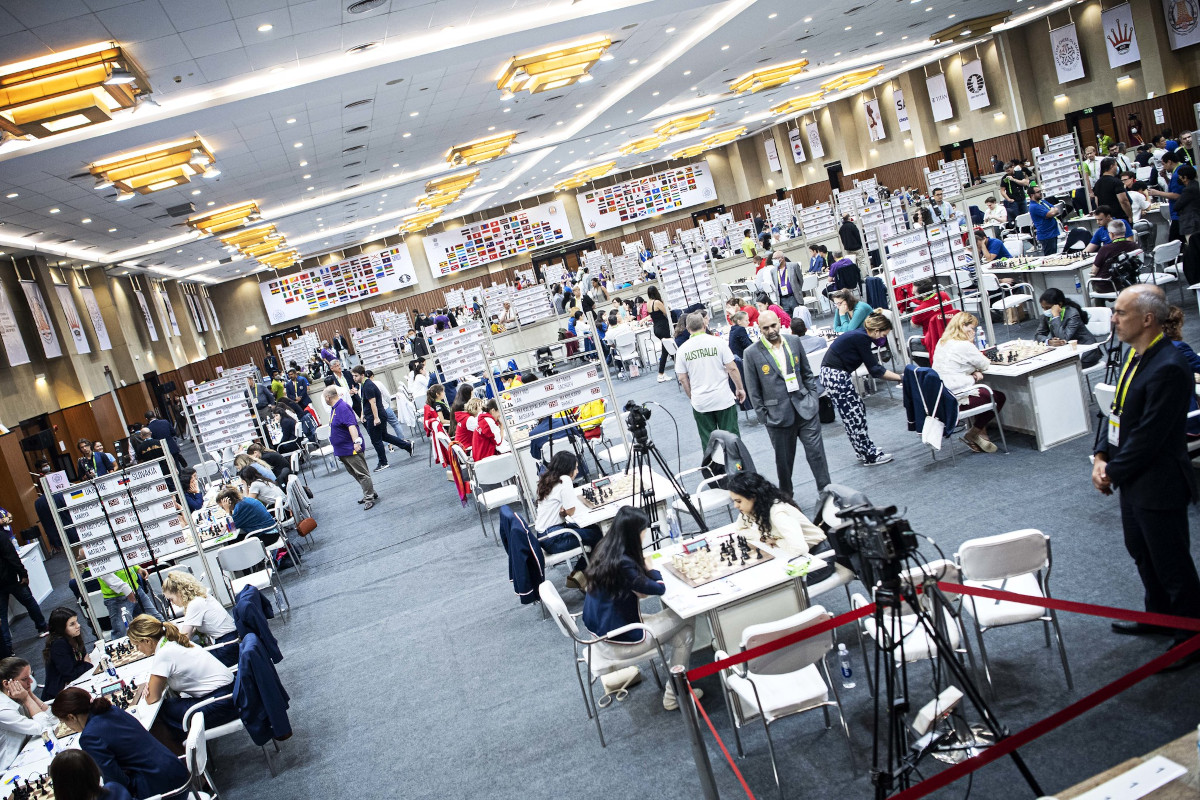 Among the teams sharing the lead on 6/6 match points is Poland, which has two strong 2700+ rated grandmasters on top boards: Jan-Krzysztof Duda and Radoslaw Wojtaszek. Duda made his debut in round 2, and he got to play a good-looking final move after Australia’s Anton Smirnov blundered on move 26.

Poland, which arrived in Chennai as the fifth favourite team, will face Romania in Monday’s fourth round. 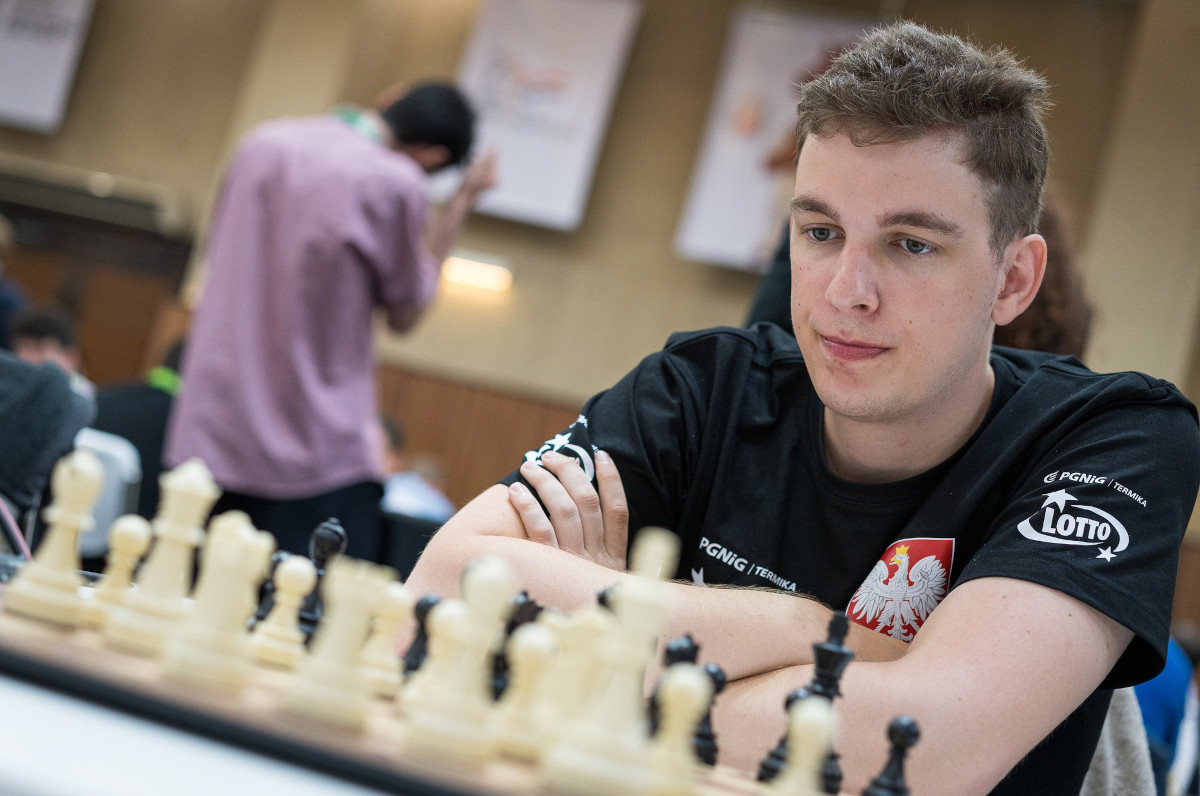 India 2 vs Switzerland / Poland vs Australia

Big wins for Italy and Austria

After Magnus Carlsen helped the Norwegian team get a commanding 4-0 victory over Uruguay in round 2, the third seeds from the Scandinavian country were upset by a well-balanced Italian squad.

It is true that Norway’s average rating is heavily boosted by Carlsen’s presence, but in this case, they also had a rating advantage on all the remaining boards. Draws on the two top boards and wins on boards 3 and 4 gave Italy the crucial victory. Moreover, as noted by Italy’s team captain Loek van Wely, Daniele Vocaturo ­— who held the world champion to a draw — could have even taken advantage of Carlsen’s over-pressing in the final stages of the game.

Lorenzo Lodici beat Jon Ludvig Hammer with white on board 3.

A wild tactical struggle led to this position, which engines evaluate as winning for White. Lodici’s natural-looking 39.hxg6, however, gave Hammer a chance to save the draw with the cold-blooded 39…hxg6 — now 40.Nd6, which was the winning manoeuvre on the previous move, can be responded by 40…Qd2 and Black survives.

The contenders were in time trouble, though, and Hammer erred with 39…Qxf1+, which was followed by resignation after 40.Kxf1 Rxd1+ 41.Ke2. 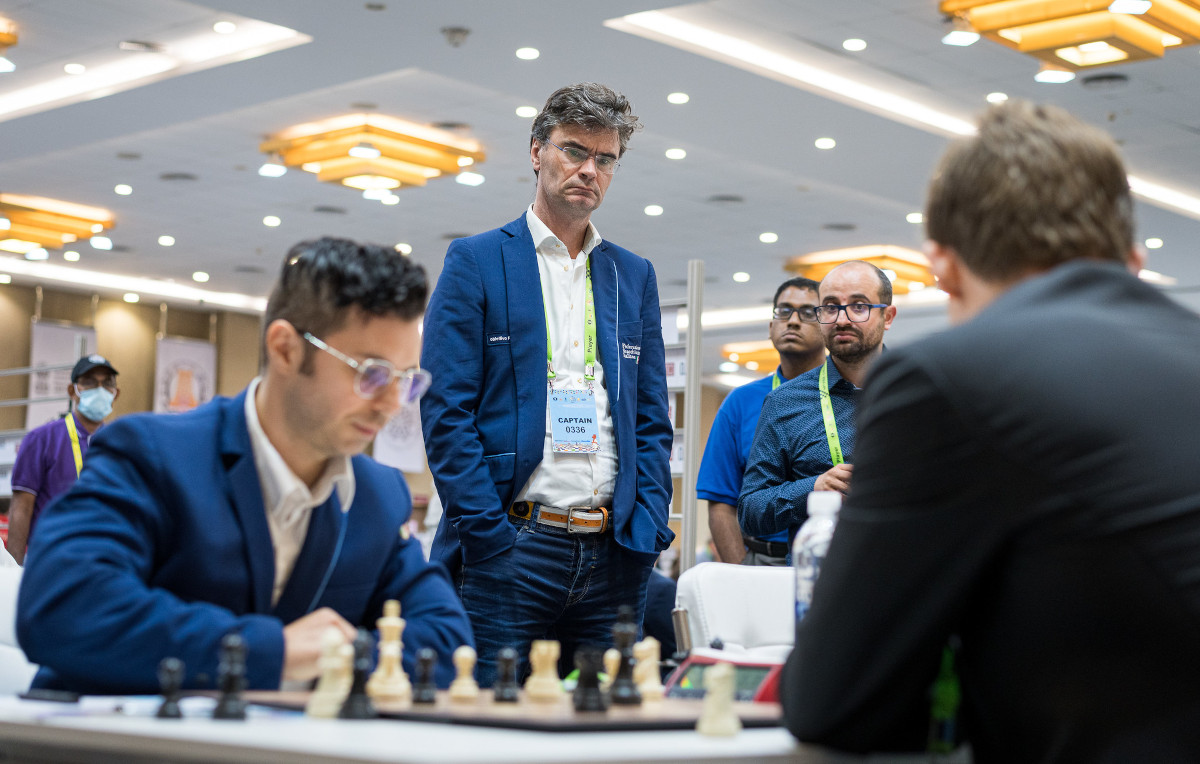 Meanwhile, Austria got the better of Germany by the smallest of margins. Much like Italy, the Austrians scored on boards 3 and 4, with Felix Blohberger beating Liviu-Dieter Nisipeanu and Dominik Horvath taking down Dmitrij Kollars. In both cases, the Austrian representative had a 150+ rating deficit compared to his German opponent.

Blohberger outplayed the ever-creative Nisipeanu out of a double-edged Caro-Kann Defence.

Black cannot effectively defend his kingside pawns, which prompted Nisipeanu to go for counterplay in the centre via 25…Nc4, planning to capture on e3 and to infiltrate with his queen on f1.

However, as the game continuation shows, Black’s best alternative was to grab the queenside pawns starting with 25…Qxa2, keeping the knight and rook near the king and hoping to get enough counterplay with the passers on the a and b-files.

Nisipeanu’s plan quickly backfired, as he had to resign six moves later. 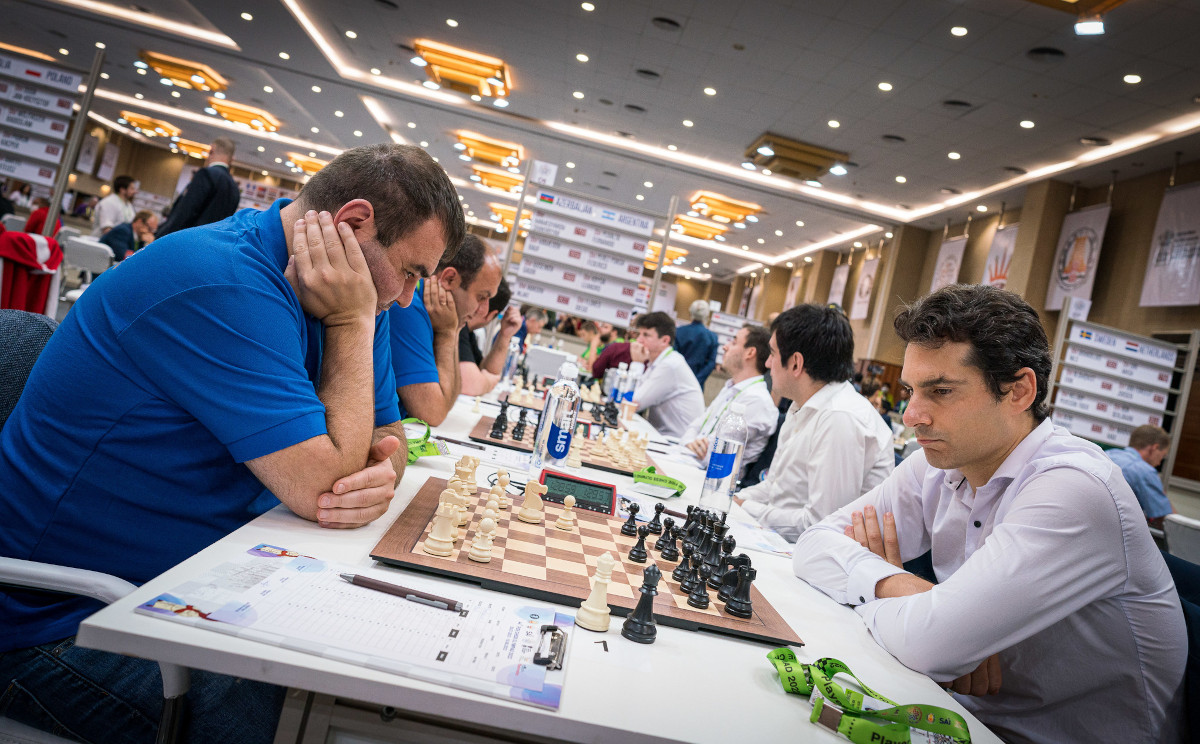 Azerbaijan is one of 20 countries with 6/6 match points — here facing the Argentine squad | Photo: Lennart Ootes

Other surprising result in the open section was Cuba’s draw with Ukraine. Yasser Quesada defeated Anton Korobov on the first board, while his brother Luis Ernesto Quesada lost against Kirill Shevchenko on board 3. Yasser and Luis Ernesto are both Yuniesky Quesada’s brothers — the latter now represents the United States, as he joined Webster University’s chess program, which also has Lazaro Bruzon in its lineup.

Find Monday’s top pairings and more technical information at the end of this article.

All games from the three matches mentioned in this section

Women’s: Upsets by Mongolia and Estonia

Continuing the trend seen in the open section, Mongolia upset a higher-rated opponent by scoring wins on boards 3 and 4. The East-Asians defeated the United States, with wins by Turmunkh Munkhzul over Carissa Yip and Bat-Erdene Mungunzul over Tatev Abrahamyan.

As shown by Karsten Müller’s analysis, Abrahamyan could have held a draw in the tricky knight endgame with five pawns per side.

The Armenian women’s squad was also upset in round 3, as Estonia’s Mai Narva beat Elina Danielian on board 1, and three draws were signed in the remaining encounters of the match. In Monday’s fourth round, Estonia and Mongolia will have tough tasks, as they are set to face India 2 and Kazakhstan respectively.

It should be noted that, much like in the open section, all three Indian women’s teams have 6/6 match points after three days of action. 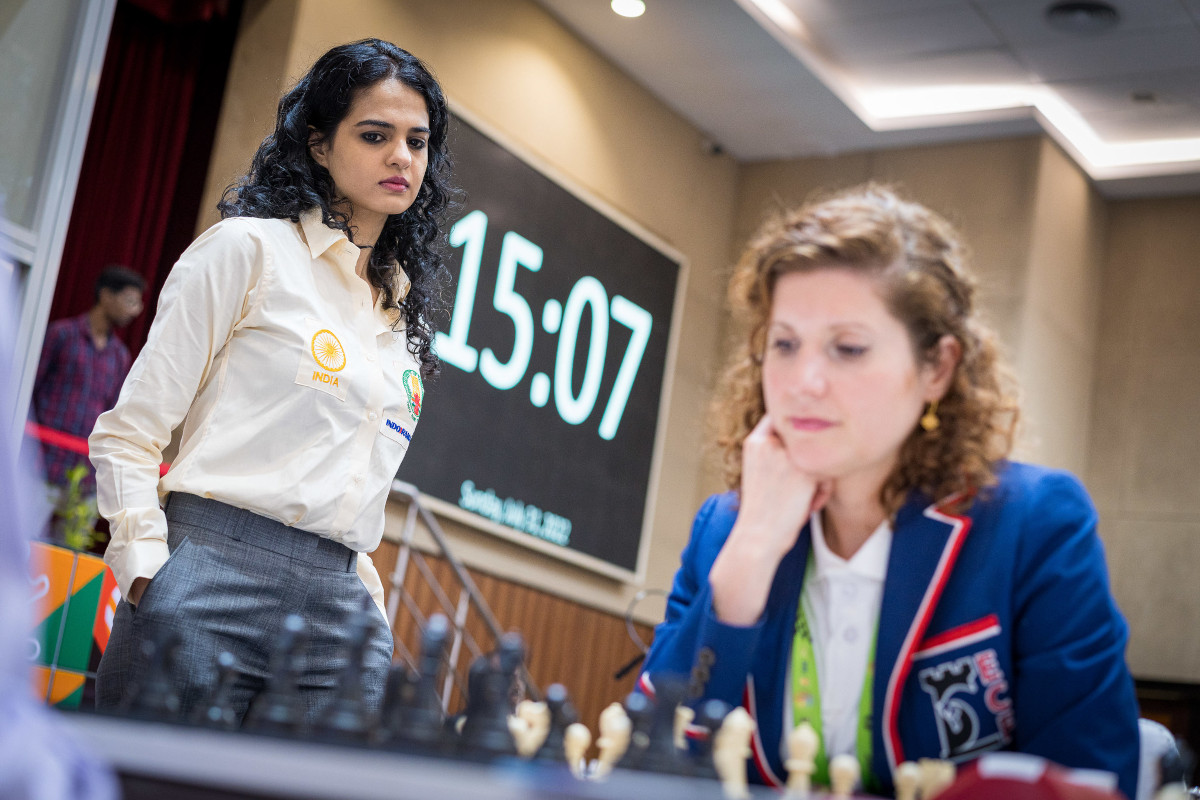 Commentators extraordinaire — Tania Sachdev and Jovanka Houska both drew their games as Indian beat England 3-1 in round 3 | Photo: Lennart Ootes

Devin Booker To Undergo Testing on Hamstring After Game 2 Loss

8 Celebrities’ Aesthetic Rooms to Inspire You to Redecorate

World can end Covid emergency this year: WHO chief