Carlsen joins the fray in style

A second round of, still, mostly lopsided matches was played on Saturday in Chennai. However, some of the teams already fielded their top players after allowing them to rest on opening day. Notably, Magnus Carlsen and Fabiano Caruana — who celebrated his 30th birthday — made their debuts for the Norwegian and US teams respectively.

While Caruana used a pragmatic approach, signing a safe draw with white against Paraguay’s Axel Bachmann, Carlsen worked extra hard until getting an on-brand victory over Uruguay’s Georg Meier. The world champion thus helped Norway score a 4-0 win over the South American squad now reinforced by the recently transferred Meier.

In the game, Carlsen gained a pawn just before entering a queen endgame. Engines showed zeros for quite a while, but commentators suspected the world champion was not going to stop trying, and that it was likely he would eventually succeed.

And they were right: it was a typical Carlsen endgame grind. As GM Karsten Müller shows in his analysis below, even when White gained a second extra pawn and had connected passers on the kingside, the 6-men tablebases evaluate the position as drawn. But precise defence is needed to keep the balance. 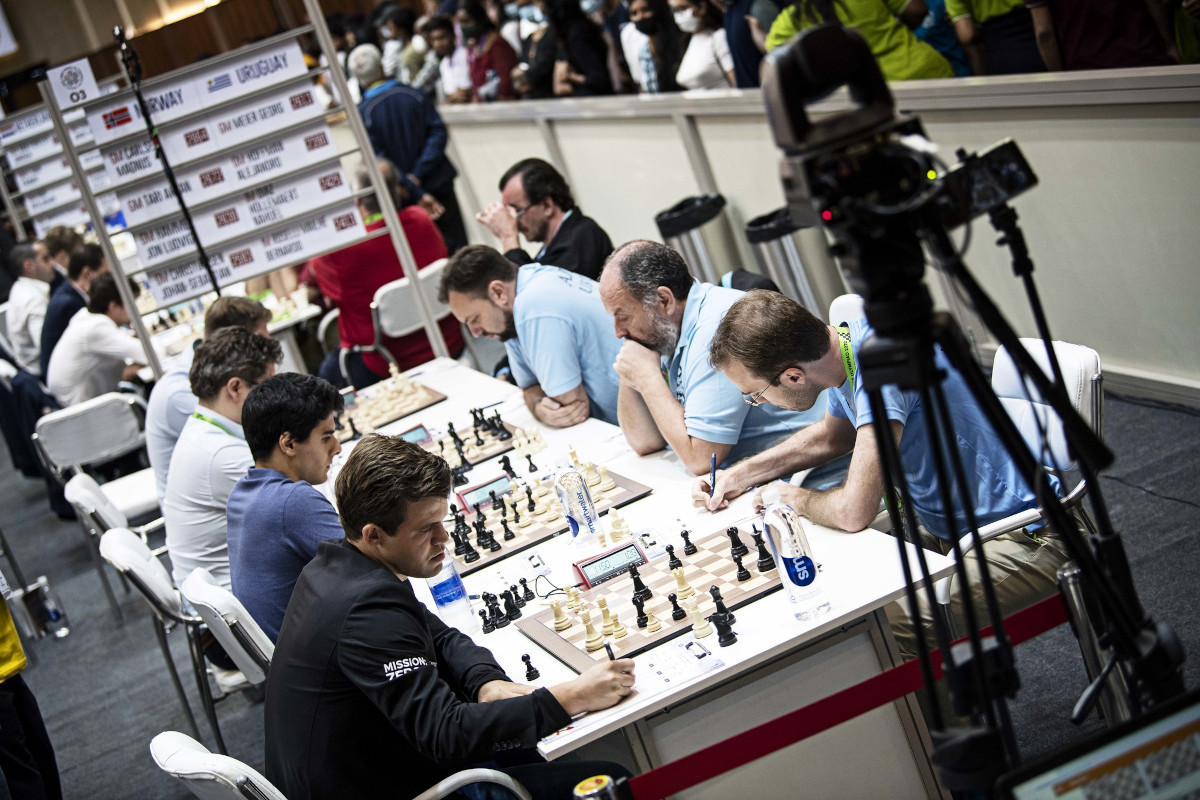 Upsets by Zambia and Bulgaria

To describe Bulgaria as an underdog does not sound quite right. However, this time around, the European country has not sent its highest-rated players to the Olympiad. According to the July official FIDE ratings list, Bulgaria’s number 10 is representing the country on top board, while an untitled 2272-rated player is fourth in the lineup.

The relatively low ratings did not prevent them from taking down the 15th seeds from Croatia by a convincing 3½-½ score. On board 3, Tsvetan Stoyanov (rated 2450) tactically outplayed Ante Brkic (2611) from the white side of a Sicilian. 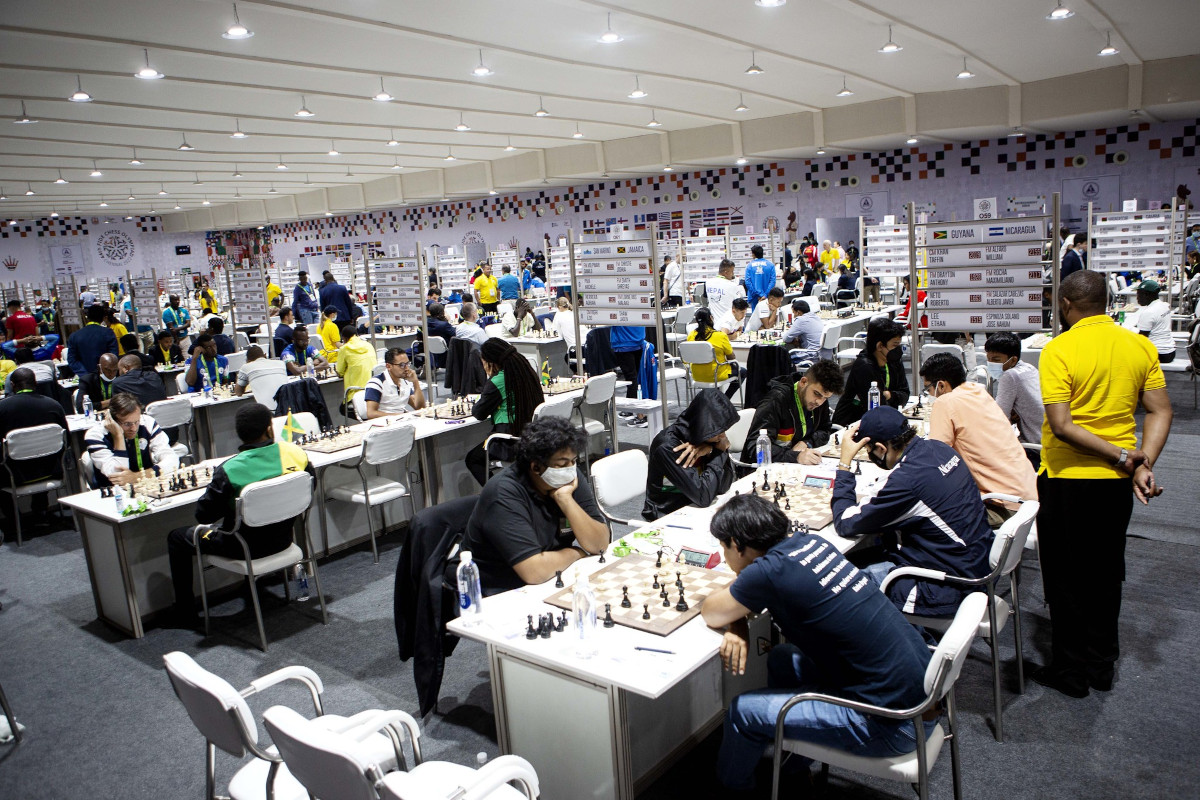 Bulgaria is, notwithstanding, a traditional chess country. Zambia’s upset was, therefore, perhaps more surprising. The squad from the landlocked South-African nation defeated Denmark despite having a 200+ rating deficit on all four boards.

Zambia beating Denmark at the Chess Olympiad is another testimonial of how – while heritage, ranking, rating, and prestige look good on paper – the only thing that really matters is how many good moves one makes on a given day.

Draws were seen on boards 1-3 while Nase Lungu (2216) scored the all-important victory, over Martin Haubro (2411), on the fourth board.

Black’s 31…Rd6 was not a great idea. Lungu quickly replied with 32.g5, and after a series of exchanges in the centre, the knight had a marvellous outpost on f6 to wreak havoc on Black’s camp. Haubro was checkmated seven moves later. 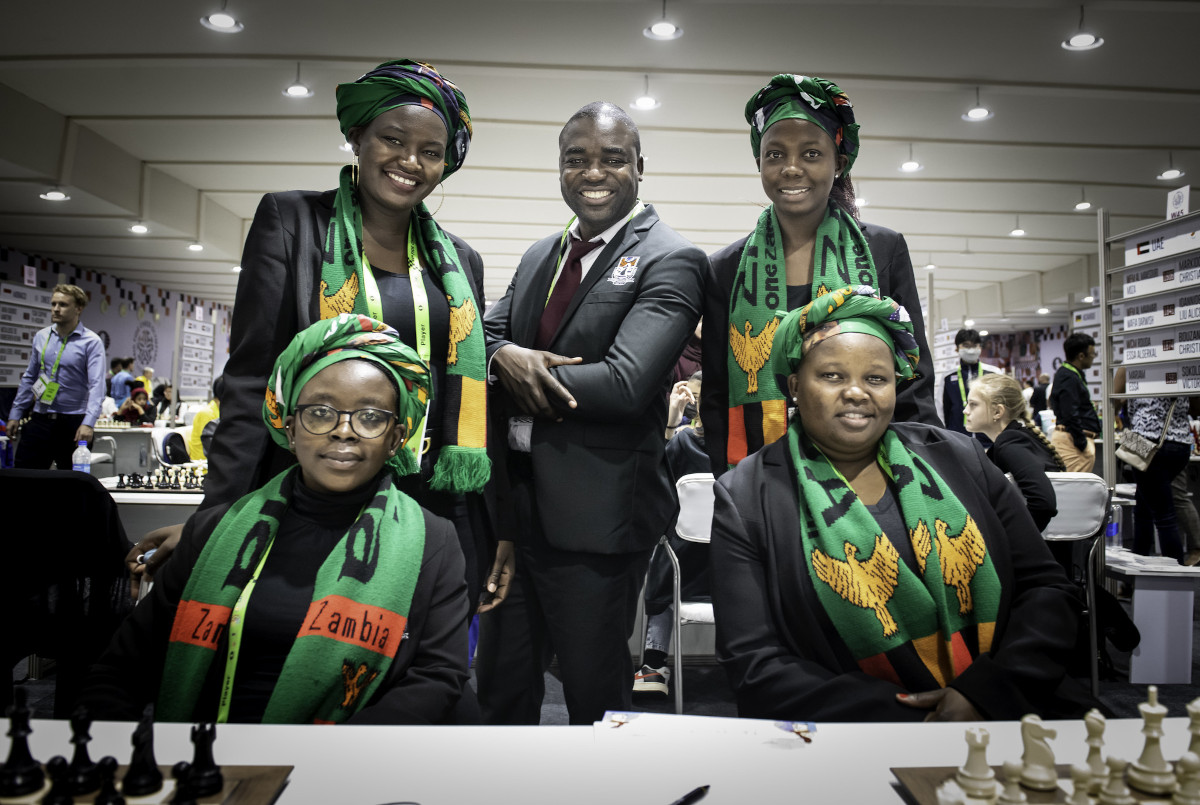 More evenly matched encounters will be seen in round 3, with the favourites from the United States paired up against Georgia and the second seeds from India set to face Greece.

Find Sunday’s top pairings and more technical information at the end of this article.

Bulgaria vs Croatia and Zambia vs Denmark

A larger number of upsets on individual boards were seen in the women’s section. However, the favourites mostly managed to win the matches against their lower-rated opponents.

The one major surprise was seen on board 26, where Ecuador defeated the 26th seeds from Slovenia. Wins on boards 2 and 3 were enough for the South Americans to get their second consecutive victory, plus the right to face the 19th seeds from Israel in round 3.

On board 3, Slovenia’s Teja Vidic (2099), playing black, would have kept the game balanced against Josselyne Peñafiel (1804) had she swapped queens at the right time.

Although 56…Rg2+ is by no means losing, 56…Qxc4 was a better alternative for Black. After 57.Kd3 Qxc4+ 58.Rxc4 White had better prospects in the ensuing endgame. Peñafiel showed good technique until getting a 72-move victory. 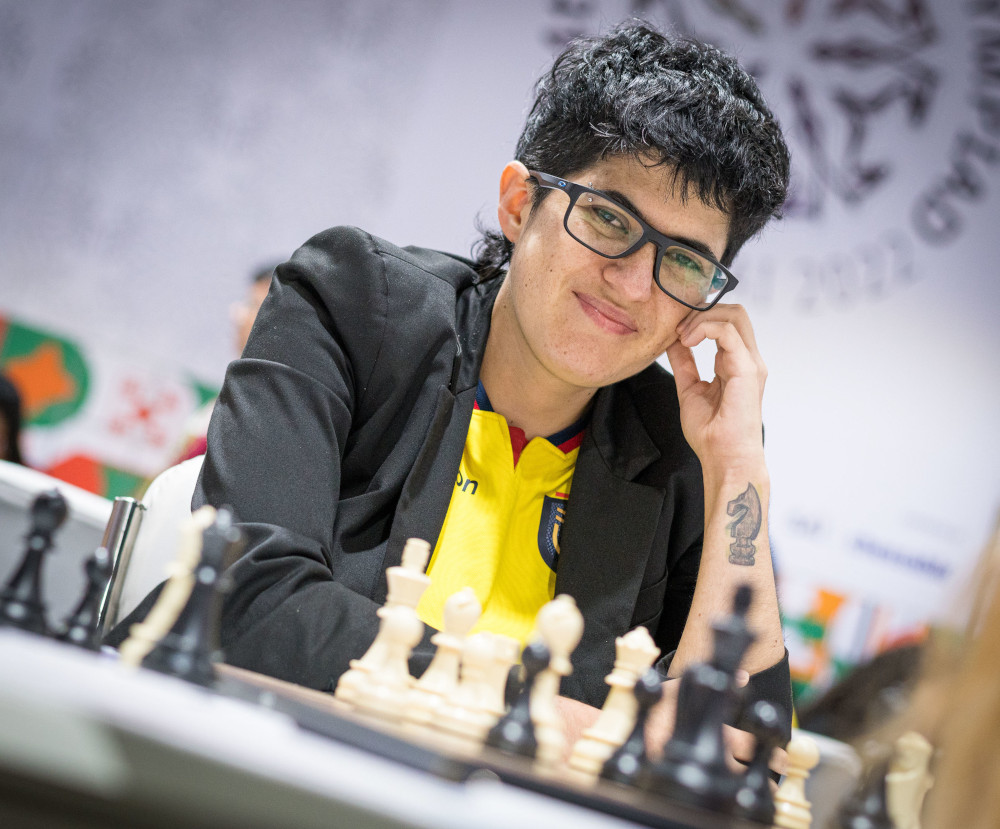 In round 3 of the women’s tournament, the favourites from India will face England, while the second seeds from Ukraine will be paired against Slovakia.

Leo and their Strategy | ChessBase

Understanding before Moving 88: Basics of the Benko Gambit (7)

Understanding before Moving 88: Basics of the Benko Gambit (7)

AirAsia Philippines to increase flights in 2022

‘Prepandemic levels not quite a recovery’