A traditional event in a historic city

The Maccabiah Games have been held every four years in Israel since 1932, with the participation of many Jewish athletes from around the world. Chess is one of the many sports featured at the games.

The 21st edition was played from 13 – 22 July 2022 in Jerusalem. The atmosphere of the Maccabiah Games was palpable in the historical city, with a huge number of sportspeople from different countries speaking different languages and waiting to compete in a range of sports. For us, it is a great pleasure to have the game of chess included in these extraordinary celebrations. 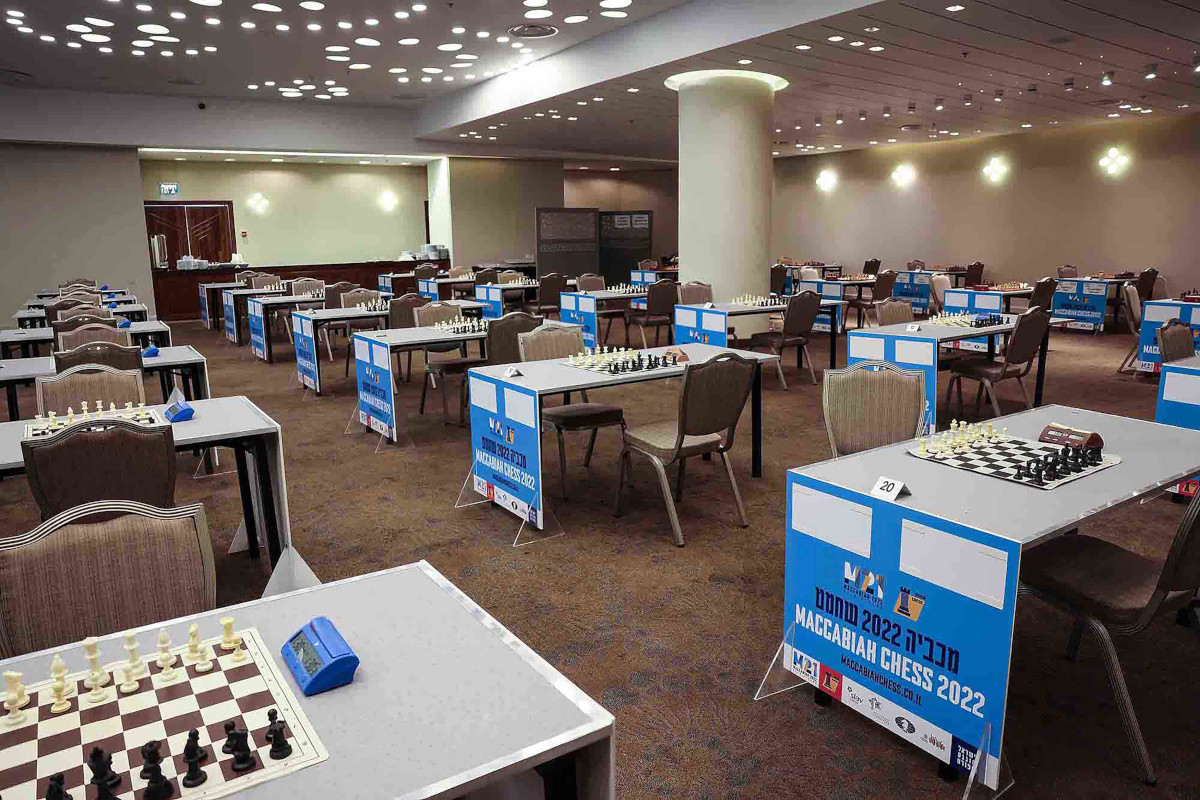 The venue for the tournament was Hotel Ramada, located a 5-minute walk from Heikhal HaSefer (Shrine of the Book) which houses the Dead

Sea Scrolls and the “Knesset”, the Israeli Parliament with its 120 members.

Moshe Slav, the director of the chess event since 1978, noted in the chess opening ceremony: “This is the second biggest sports event in the world, and we are happy to provide the best for our athletes from all the participating countries” 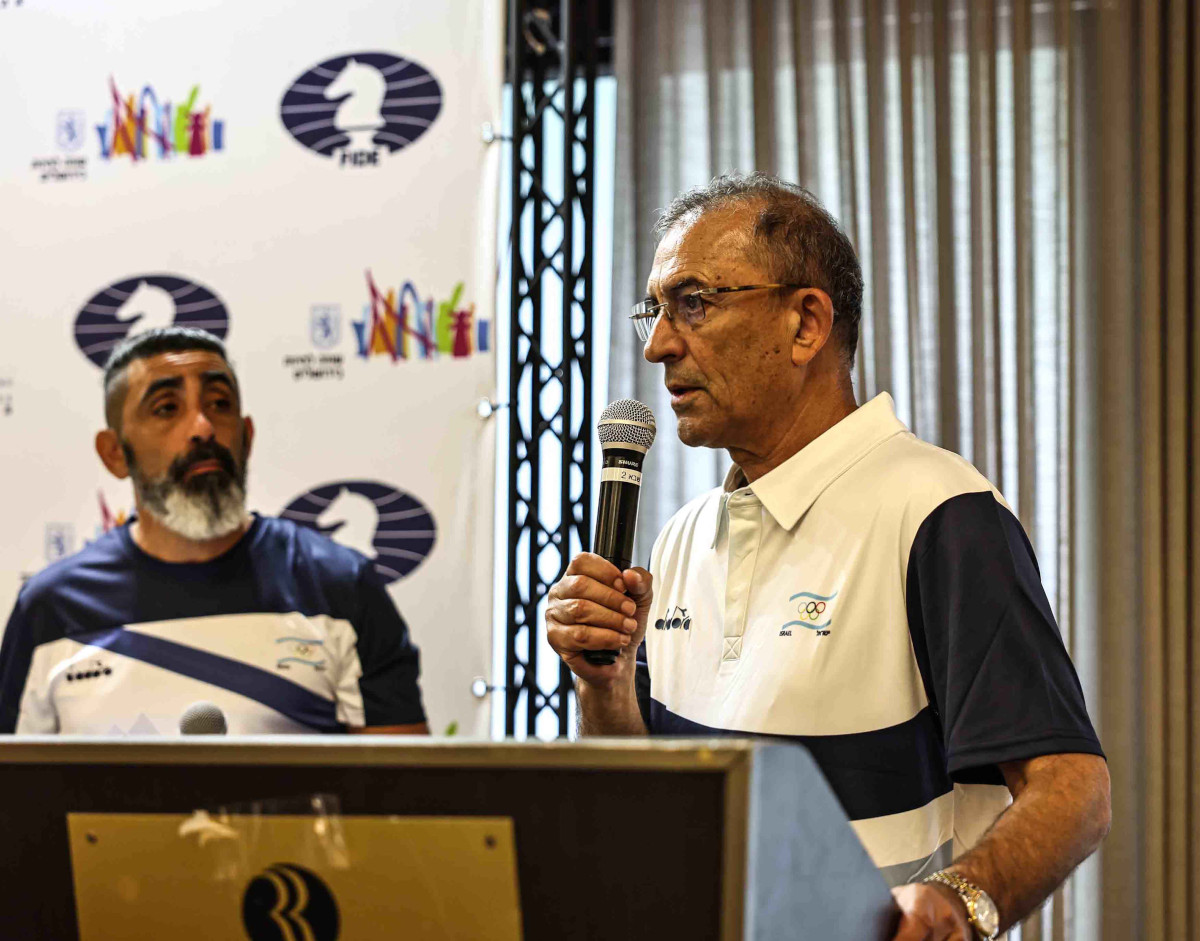 After the round started, many of the “Maccabim” from international delegations became captivated by the chess games, reluctant to leave the hall. 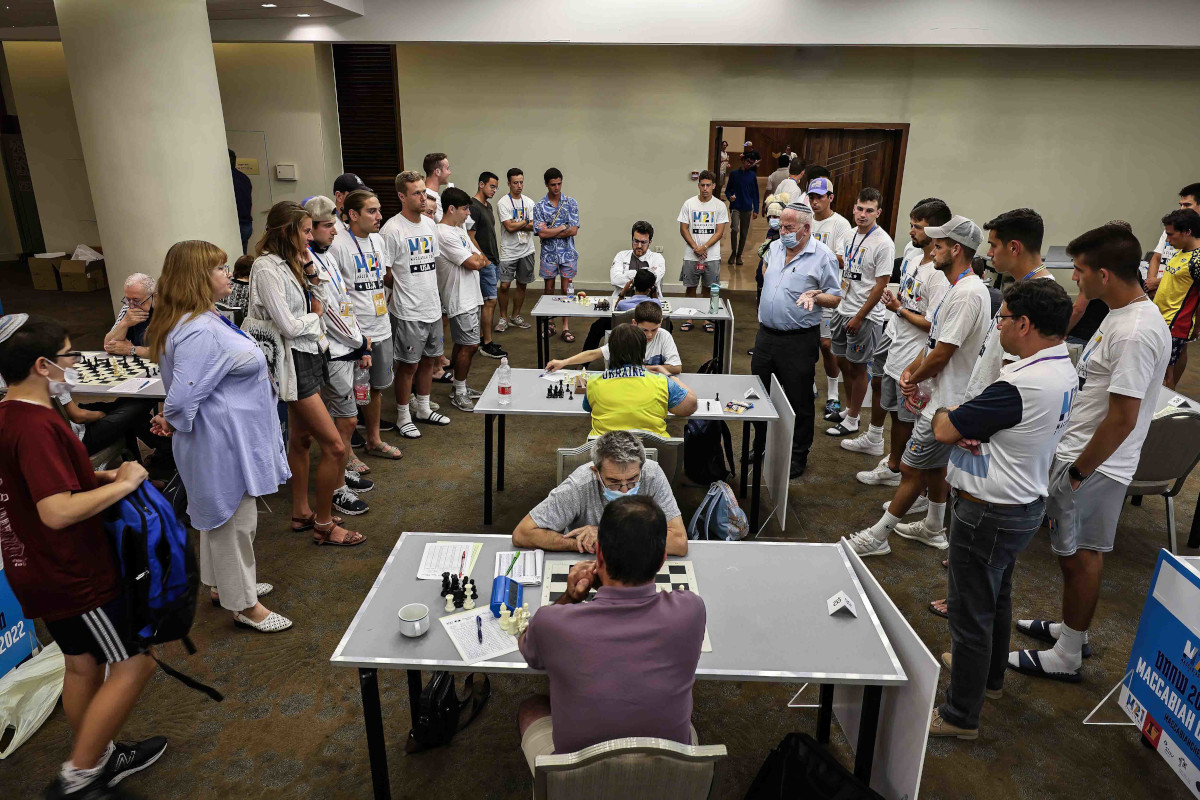 A total of 107 players played in the event: 10 in the invitational GM tournament, 67 in the open section, and 30 in the junior event which was held in Haifa. The players showed that they didn’t just come to celebrate, and in the closed tournament more than half of the games ended with a win.

The composition of the closed tournament:

The first part of the tournament was tough, with no player gaining more than 2.5 out of 4 points, but in the second part Kobo, Postny and Smirin started to accumulate wins, securing themselves a place on the podium. GM Ori Kobo, despite losing in the first round to Smirin, showed a great fighting spirit and finished first with 4 wins and 6 points – gaining the gold medal. 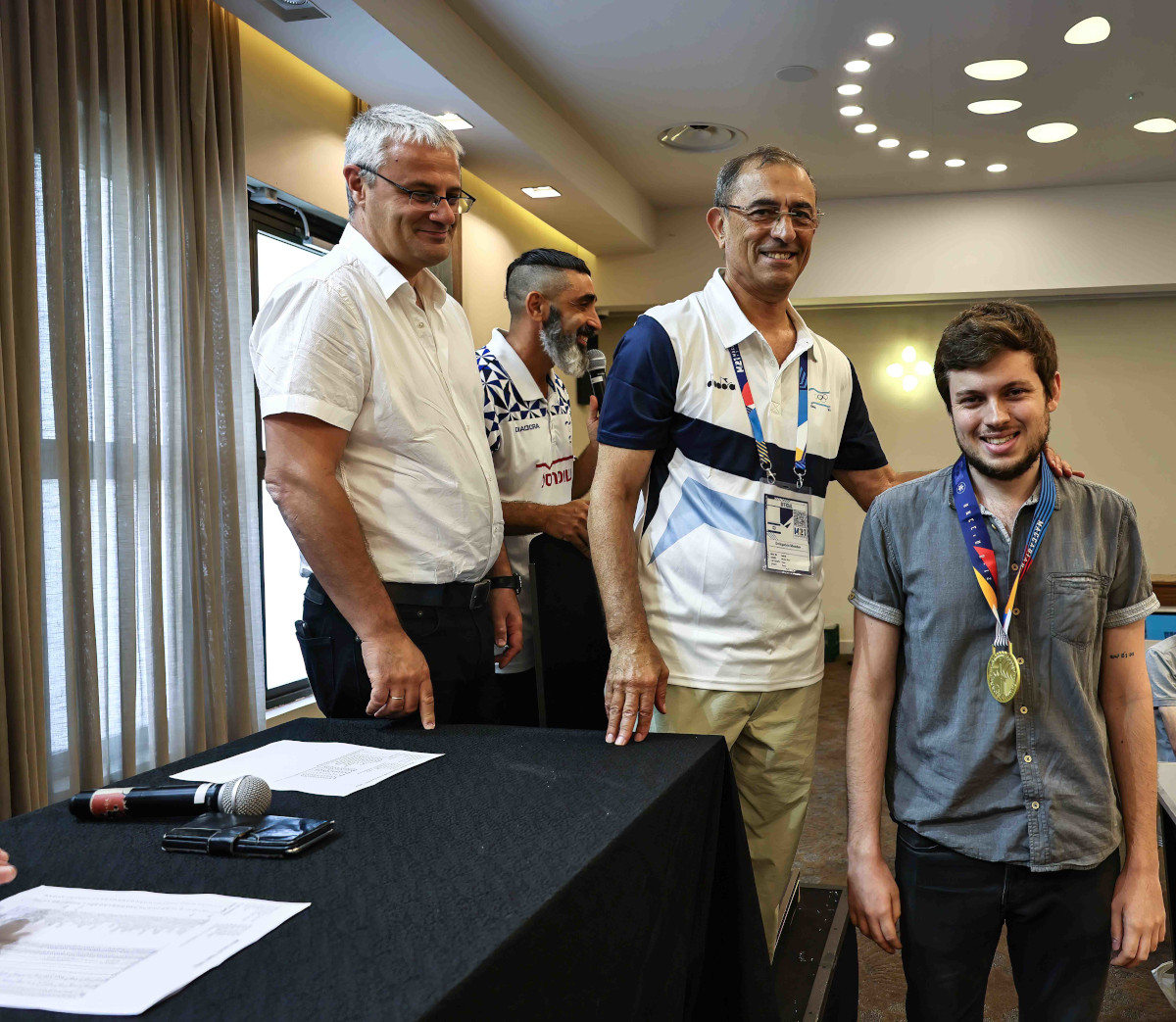 Right away after his loss, Kobo took some chances that worked out well for him:

The position on the board after 21… Rc8 promises some opportunities for attack, despite the bishop on e7 being restricted.

The position below is after 32.Bh3

In his win against Postny in the 5th round, Kobo played 39.Re1 setting up a trap for Black who was in time trouble. Black replayed 39…Rxe5 and lost on time. Can you figure out what Ori’s idea was?

It is curious that the gold medal, which theoretically could be flying now to any part of the world, stayed a few minutes’ walk from the hall, in Kobo’s apartment. 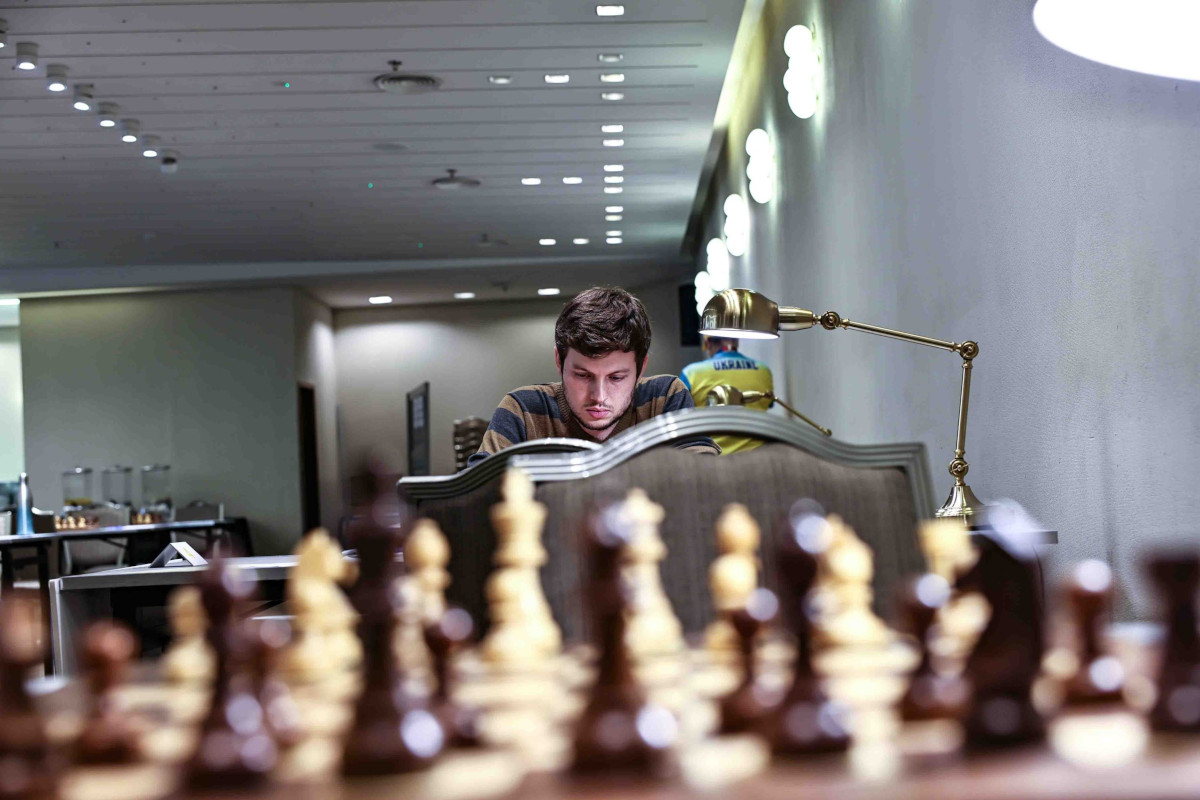 Postny, a member of the Israeli National team, ended the tournament with an impressive 3 consecutive wins, overtaking Smirin in the photo finish and finishing second with an equal number of points to Kobo (6 points), but with a worse tiebreak (Berger).

An interesting fact is that Postny played his previous and first Maccabiah in 1997. It was the junior tournament held in Zikhron Ya’acov where he also won the silver medal: 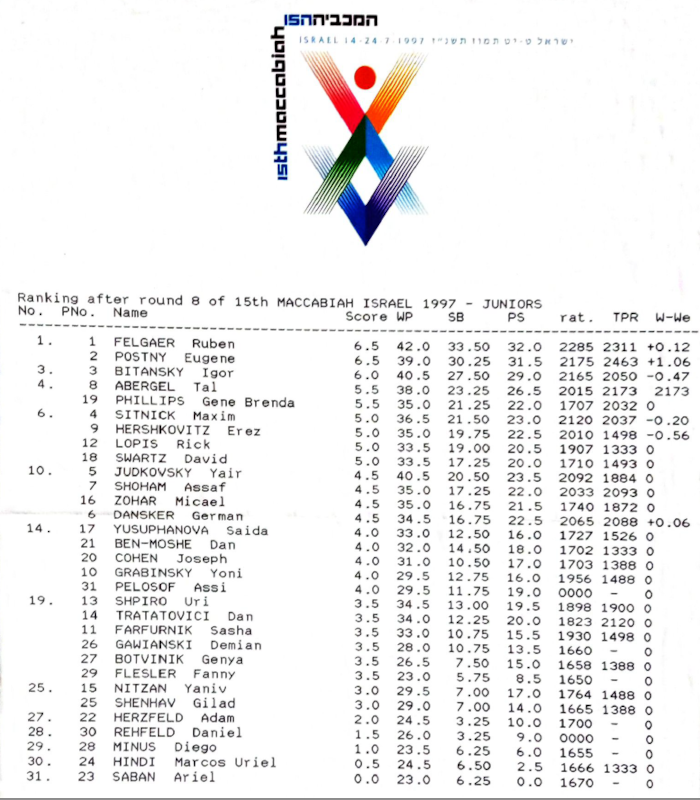 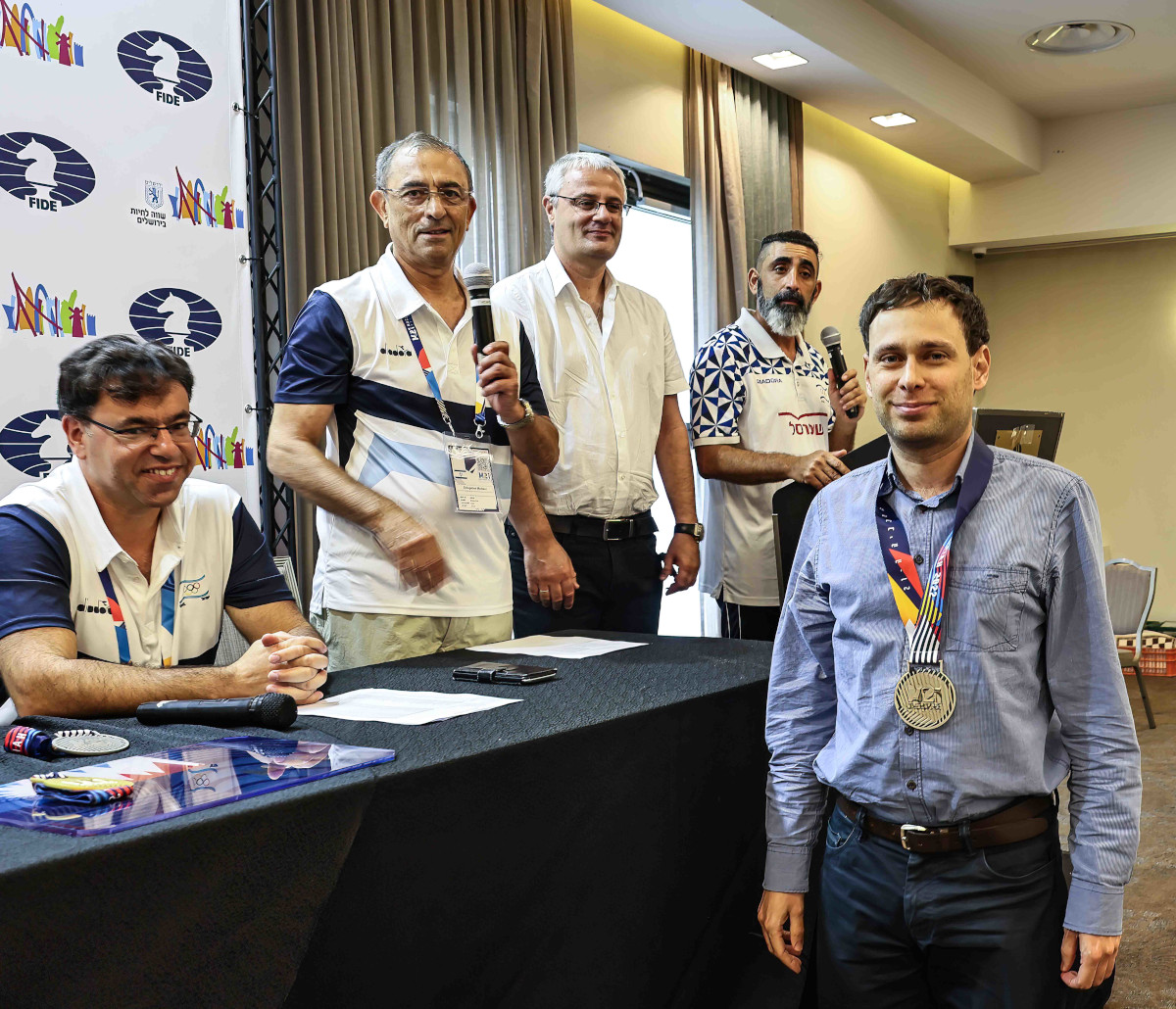 In round 1, Postny, playing with black pieces, managed to convert a dry position into a win.

Ilia Smirin, also a veteran member of the Israeli National team, finished in third place with 5.5 points and several exciting games throughout the tournament which, again, proved him to be a great attacker. Below we present the conclusion of Smirin’s win from round 7.

Black pieces are quite restricted so White finds a simple and effective way to attack:

This is Ilia’s third Maccabiah medal. The first was silver in 2005, and the second was gold in Saturday’s blitz tournament which he won convincingly with 8.5 out of 9. The guest IM Alon Mindlin finished second with 8 points, losing only to the winner. In third place was GM Evgeny Alekseev with 7 points.

The joint-top ranked Evgeny Alekseev finished in 6th place. After losing his first game to the young and talented Yeshaayahu, Evgeny made 5 consecutive draws and won the 7th and 8th round which generated an interesting rook endgame: 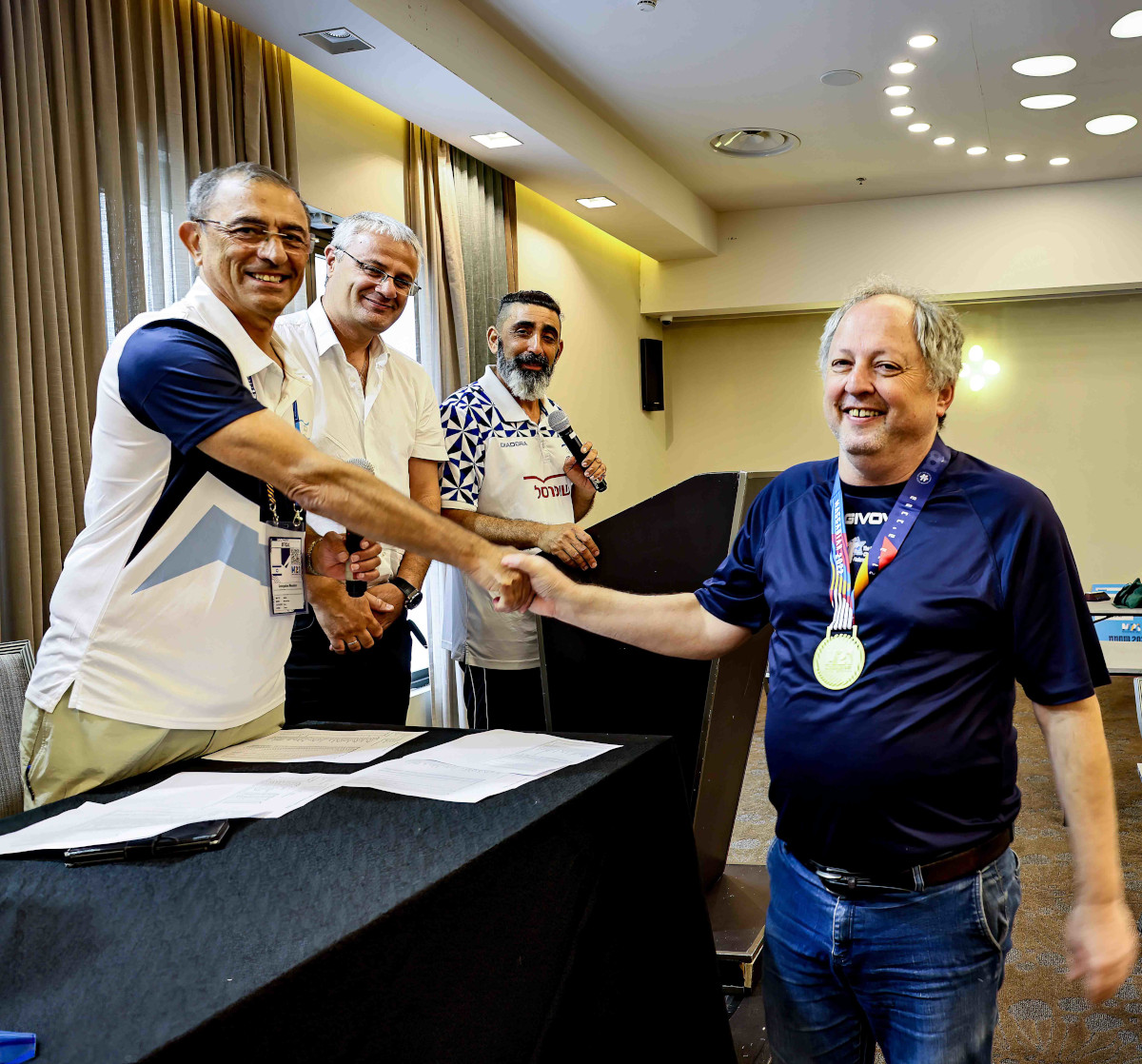 GM Ilia Smirin, receiving the gold of the blitz and bronze of the closed tournament | Photo: Dr. Mark Livshitz

In the open section, Moskovich won with 7.5 points and finished the tournament with a smile. The picture below shows the position of the last round after 34…Bh6 – an already winning position: 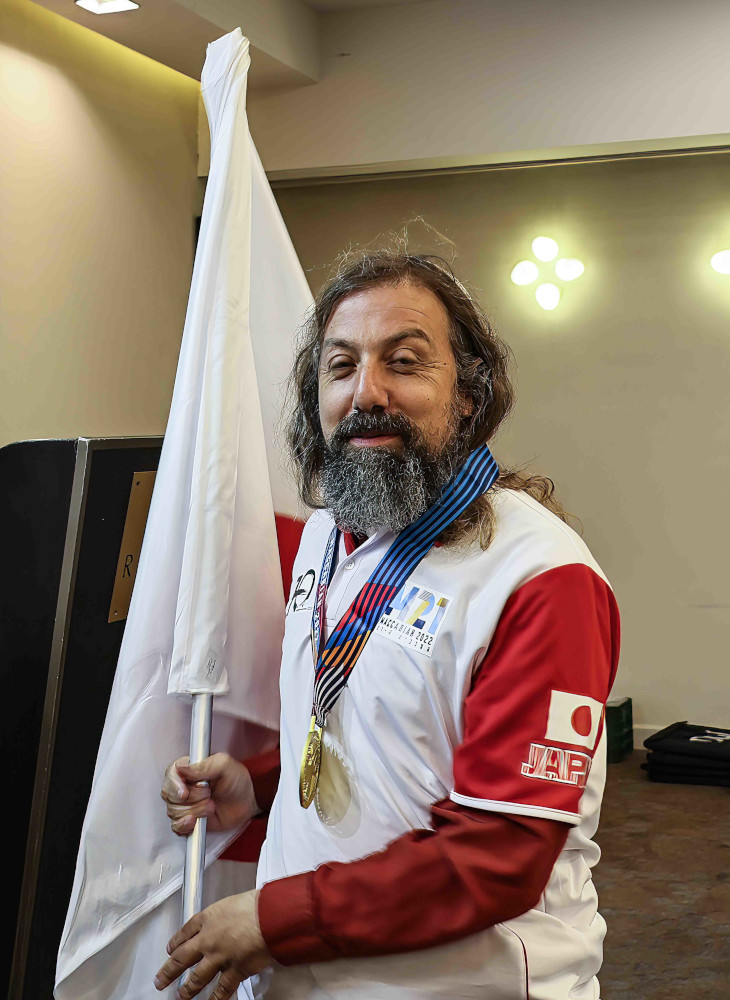 Alexey Streltsov, who according to the tiebreaks finished second with 7.5 points as well, was the only undefeated player in the tournament, with a result and performance that definitely could have ended with the gold medal in a less competitive tournament. 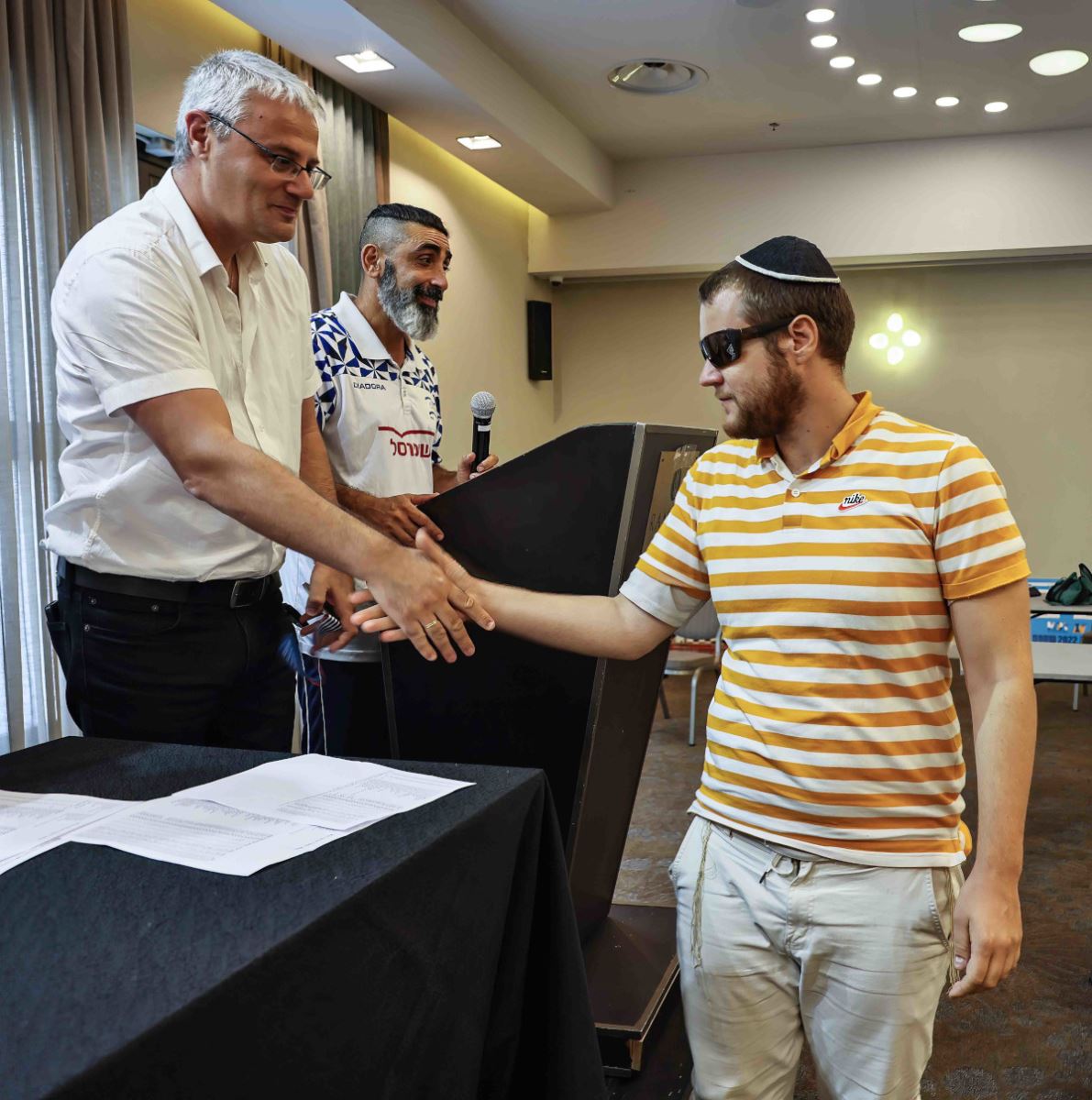 Moshe Gal, who joined the last “parking space” on the podium with his win, finished with 7 points. It was not his first medal, since he won the gold in 2017, also in the open category. Find Yochanan Afek’s report here. 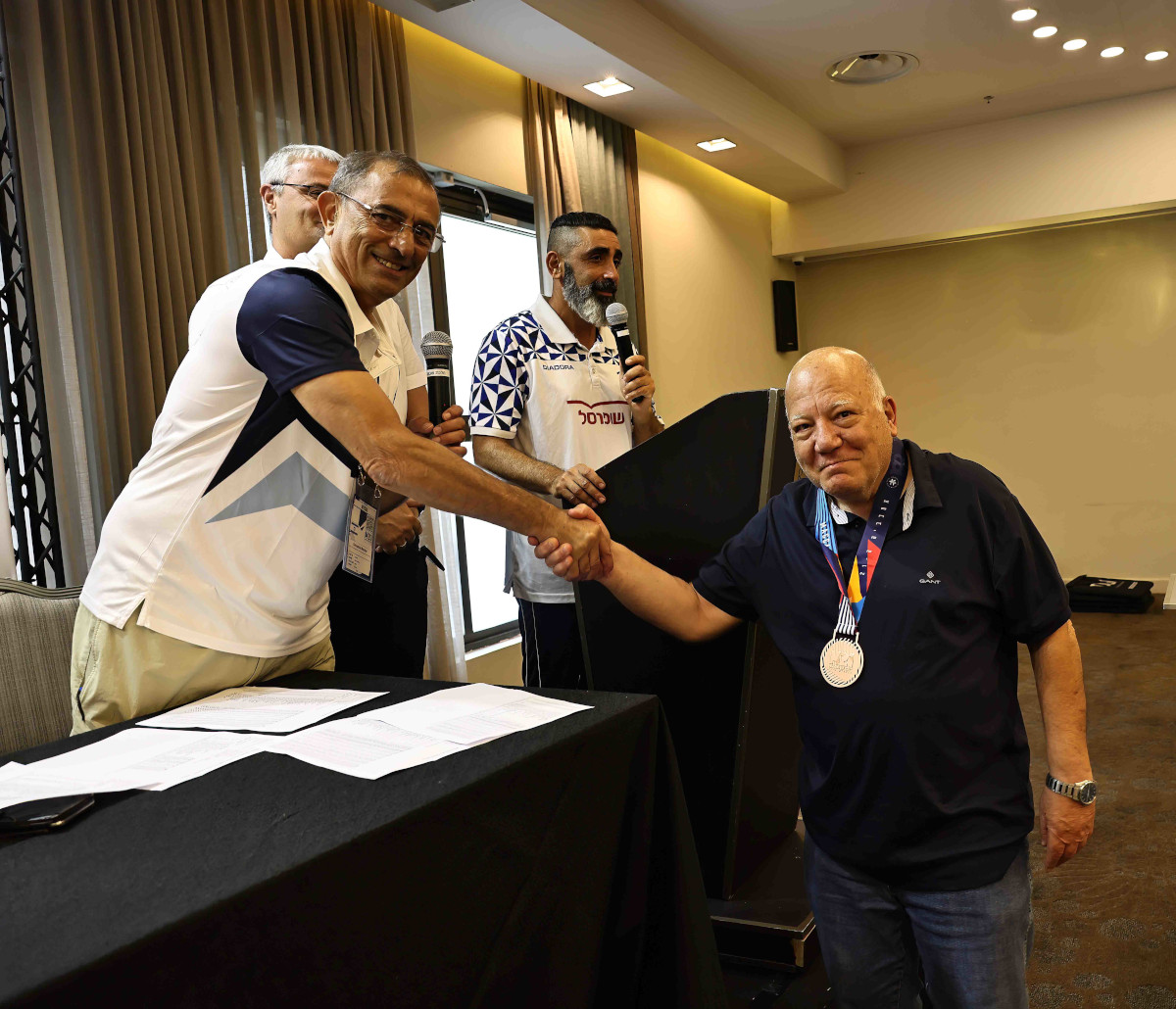 The junior section of the Maccabiah Games was played in Haifa – it is common during the Maccabiahs to host the junior category of all sports in one city, so that the junior players can enjoy the environment all together in one place. The host of the Junior Chess Championships was the Haifa-Nesher Chess Club, located in the city of Nesher in the Haifa District of Israel. Before the games, all the players assembled for a photograph: 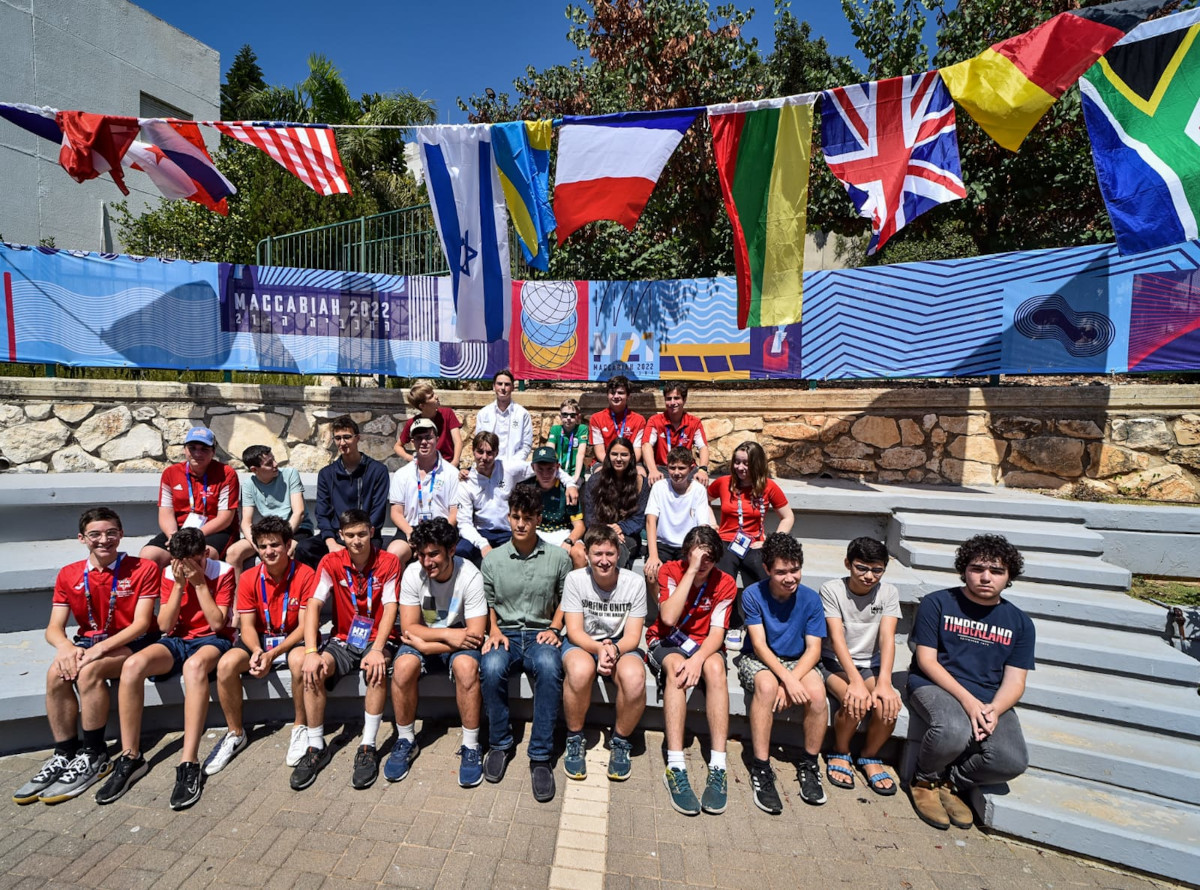 It is always a pleasure to play at the Haifa-Nesher Chess Club, not only because of the great hosting but also for the beautiful view from its balcony that overlooks the Zvulun Valley in the north of Israel (see photo below). In addition, the small city of Nesher is celebrating its 100-year anniversary, and there could be no better way to celebrate than by being part of the Maccabiah Games. 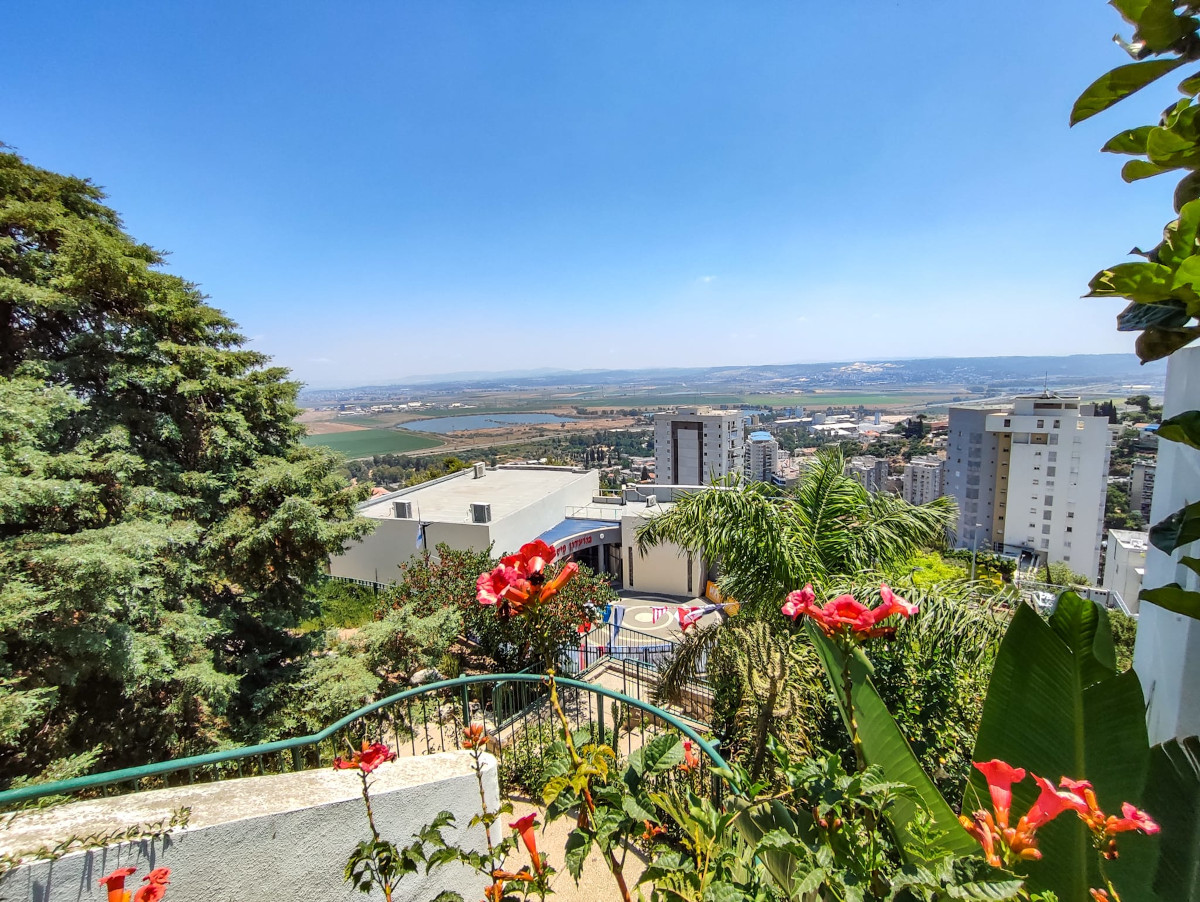 A place to find inspiration between moves | Photo: Ritvo photography 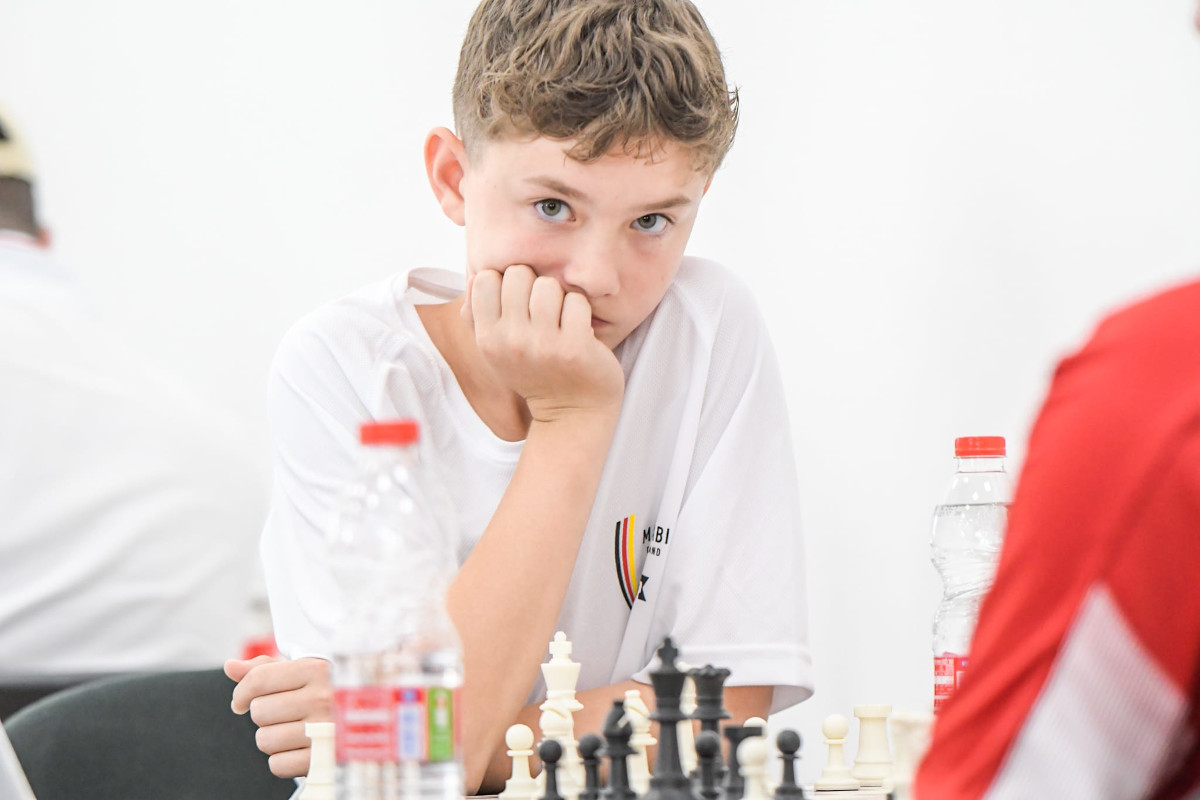 The 17th piece — water is essential in the Israeli summer | Photo: Ritvo photography 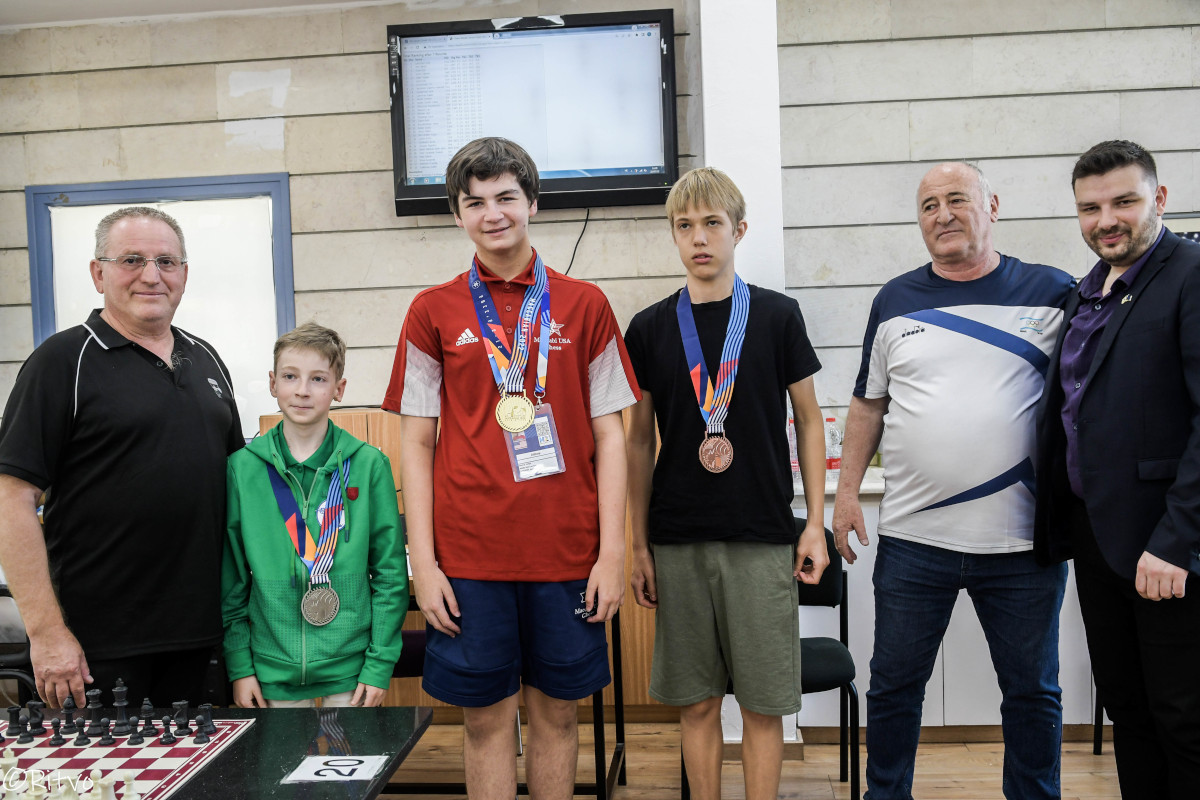 It is also worth mentioning that on 17 July, after the end of the 4th round, Dr. Shlomo Kandelshein, the president of the Hertzliya Chess Club, volunteered to present a powerful lecture about Jewish chess players in the Holocaust, many of whom were murdered in the Valley of Death in Auschwitz. Among the millions killed at Auschwitz were outstanding

Jewish athletes in all sports playing at both national and Olympic level, who were unable to fulfil their dreams.

In addition, Shlomo presented The unbelievable story of a chess piece carved from the beating stick of a Nazi commander in Auschwitz. The full article can be found here.

We appreciate Dr. Kandelshein’s efforts and dedication to this important and painful subject and we are grateful for his article and willingness to present the lecture.

To conclude, in Jerusalem’s closing ceremony, Moshe Slav, the organizer of the chess event, thanked the Maccabi World Union for their support of chess and expressed gratitude to the staff for the well-organized tournament: IA Alon Cohen (Director and Chief arbiter), NA Mark Flaum (Deputy arbiter) and the photographer of the main events in Jerusalem, Dr. Mark Livshitz. 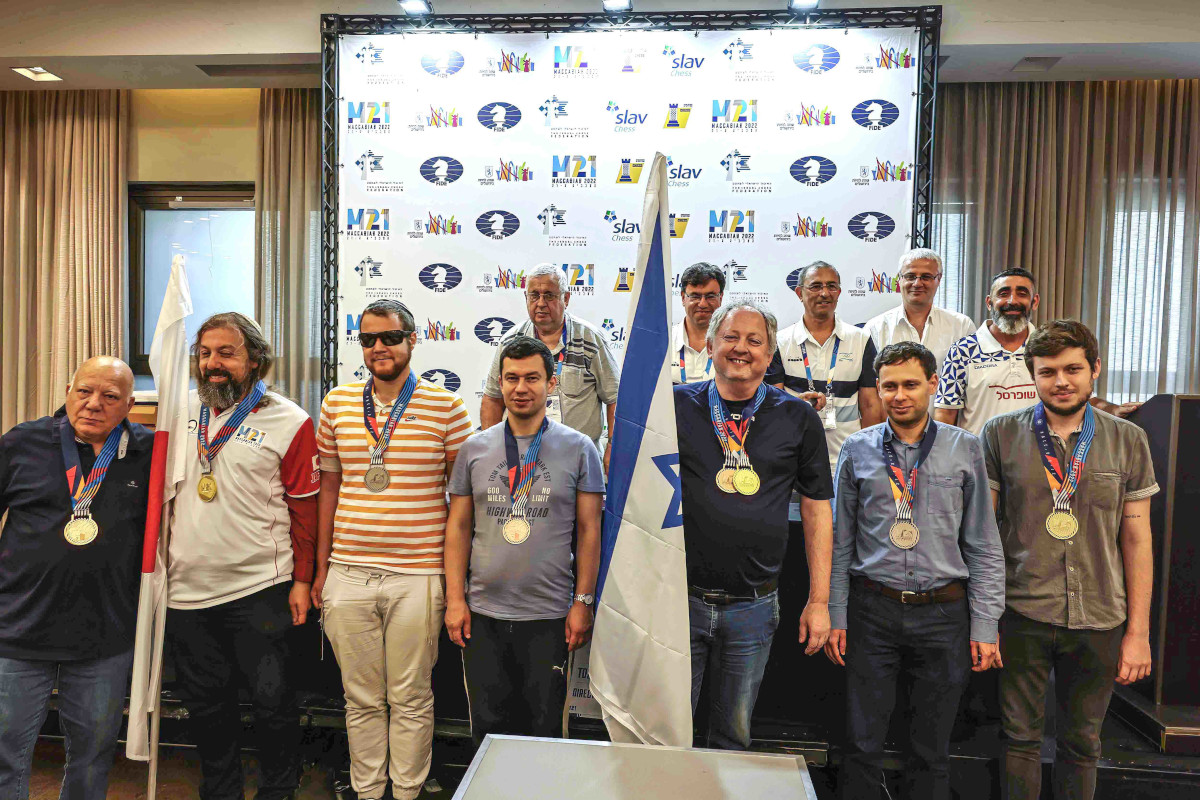 A final picture with the medallists | Photo: Dr. Mark Livshitz 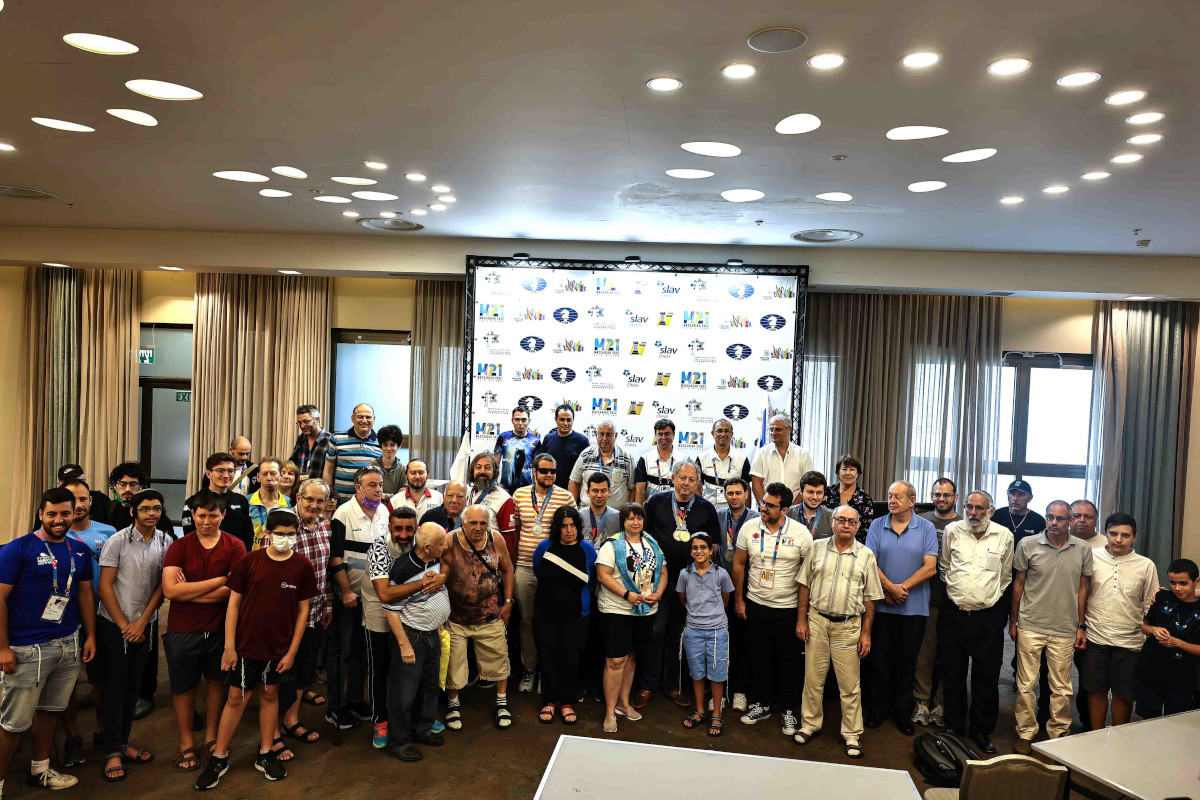 And then everybody joined | Photo: Dr. Mark Livshitz

For all the articles and more photos, please visit the official Maccabiah website.

The king in the centre

Study of the Month – Up to five pieces allowed

Study of the Month - Up to five pieces allowed

Keith Thurman vs. Mario Barrios for $74.95 on FOX pay-per-view on February 5th