The biggest celebration of chess in the calendar has begun in Chennai. A record number of participants and incredibly enthusiastic hosts only add to the fun. The 44th edition of the Chess Olympiad is likely to be remembered for years to come, if only for the zeal demonstrated by the Indian organizers, who swiftly jumped in to replace the original plan of having the event take place in Russia — only four months ago.

Luckily for chess fans, the praise for the organizers has heavily outweighed news related to the big absences of Russia and China, two of the strongest teams in both sections. As Putin’s invasion sadly continues, strong Ukrainian teams have made their way to India, although there is a player missing in the lineup, one that we would have liked to see showing his inimitable style in Chennai.

There is plenty of Ivanchuk content online though, with the genius from Kopychyntsi actively streaming on Twitch and sharing his videos on YouTube. 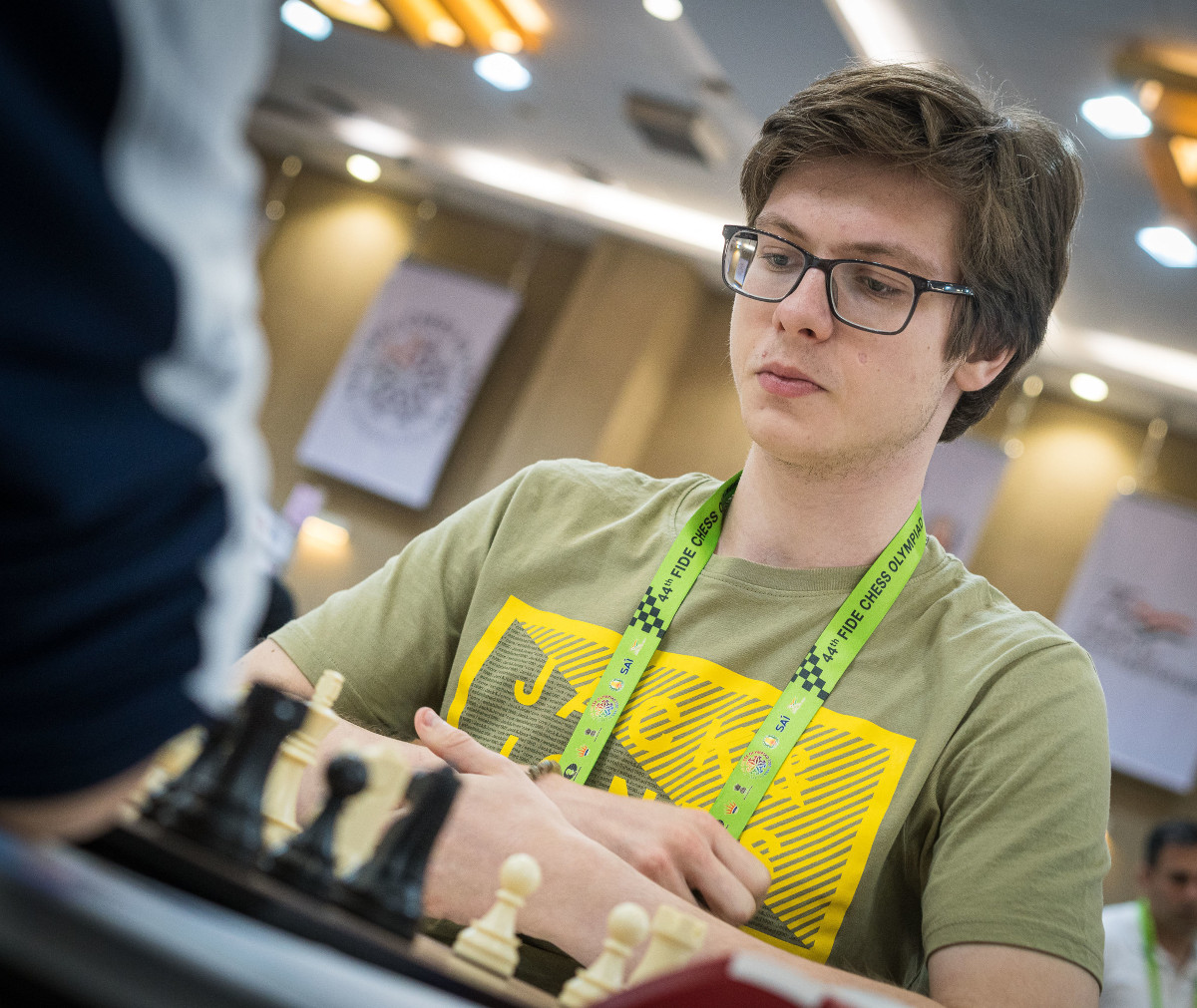 Remarkably, not a single lower-rated player upset their opponent on the first 57 boards of the open section. To find the first instance of such a result we have to go down to board 58, where Anthony Drayton from Guyana (rated 1928) defeated Jordi Fluvia from Andorra (2451).

In the women’s section, on the other hand, a couple of upsets were seen on the top 20 boards, with Sunwoo Park from South Korea (1773) beating Russian-born Dina Belenkaya from Israel (2256) and Cynthia Obondo from Kenya (1439) defeating Alessia-Mihaela Ciolacu from Romania (2163).

A few draws were seen on the top boards in the open, though, and more importantly a couple in which the lower-rated player agreed to a draw from a superior position. This is a common occurrence in Chess Olympiads, as once the higher-rated grandmaster gives their opponent a chance to get a half point (and a massive rating gain) the underdog tends to agree.

This was the case in the game between Lebanon’s Faisal Khairallah (2239) and Norway’s Johan-Sebastian Christiansen (2593). The Norwegian misplayed the position out of the rarely seen French Defence with 2.b3. Christiansen began to repeat the position on move 23 and the point was soon split.

Curiously, the same thing happened to the third highest-rated player in the field. In his debut for team USA in an Olympiad, Levon Aronian (2775) gave up an exchange out of a Rossolimo Sicilian and saw his opponent stabilizing the position to cement his advantage in the middlegame. Angola’s David Silva (2315) agreed to a draw on move 41.

Granted, converting the advantage is by no means trivial, as Aronian is an extremely tricky player and he had the bishop pair. 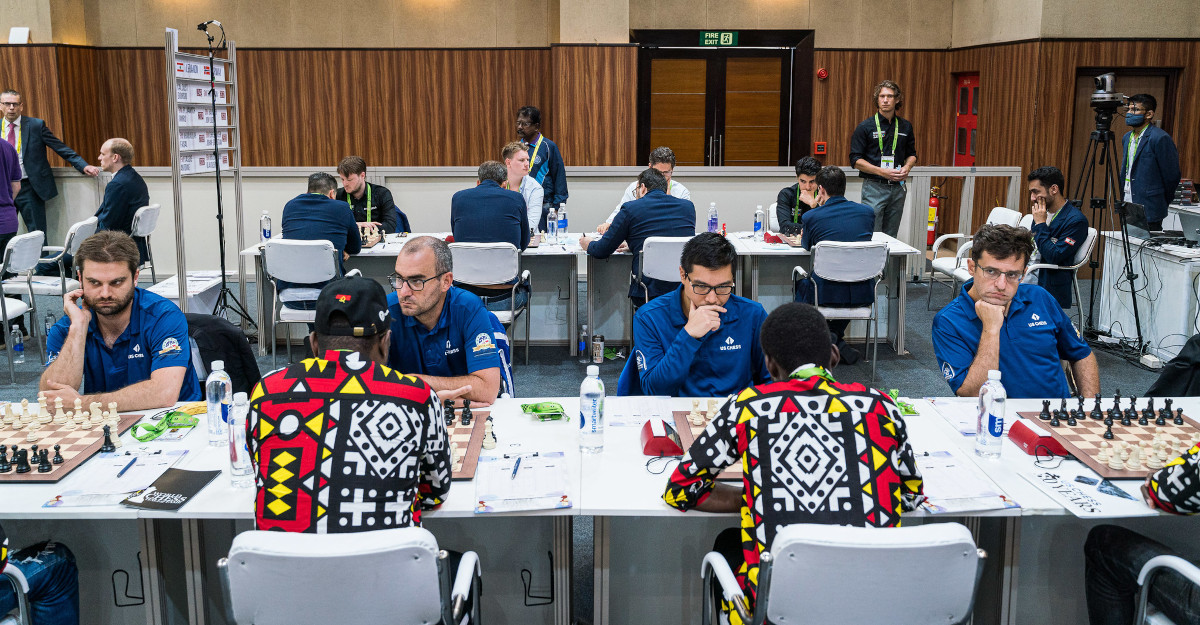 All games mentioned in this section

Given the lack of upsets in round 1, there were plenty of teams that scored a perfect 8 out of 8 in both sections. But managing to win on every single board is certainly more difficult if the country has registered no fewer than six teams in both categories combined!

The Olympiad rules allow host countries to register an extra team in each section, and one more if the number of teams is odd. Luckily for the Indian hosts, there was an odd number of participants in both sections, which means they were allowed to register three teams per section. And, on opening day, all the proud local representatives collected full points, for an overall 24 out of 24 score.

The last one (out of the 24) to secure a victory was Tania Sachdev (2399). Playing on third board for India 1 in the women’s tournament, she needed 103 moves to take down Tajikistan’s Rukhshona Saidova (1624). Sachdev converted a materially balanced endgame with two bishops (plus an active king) against bishop and knight.

This is how the position looked after 86 moves. Black is winning. 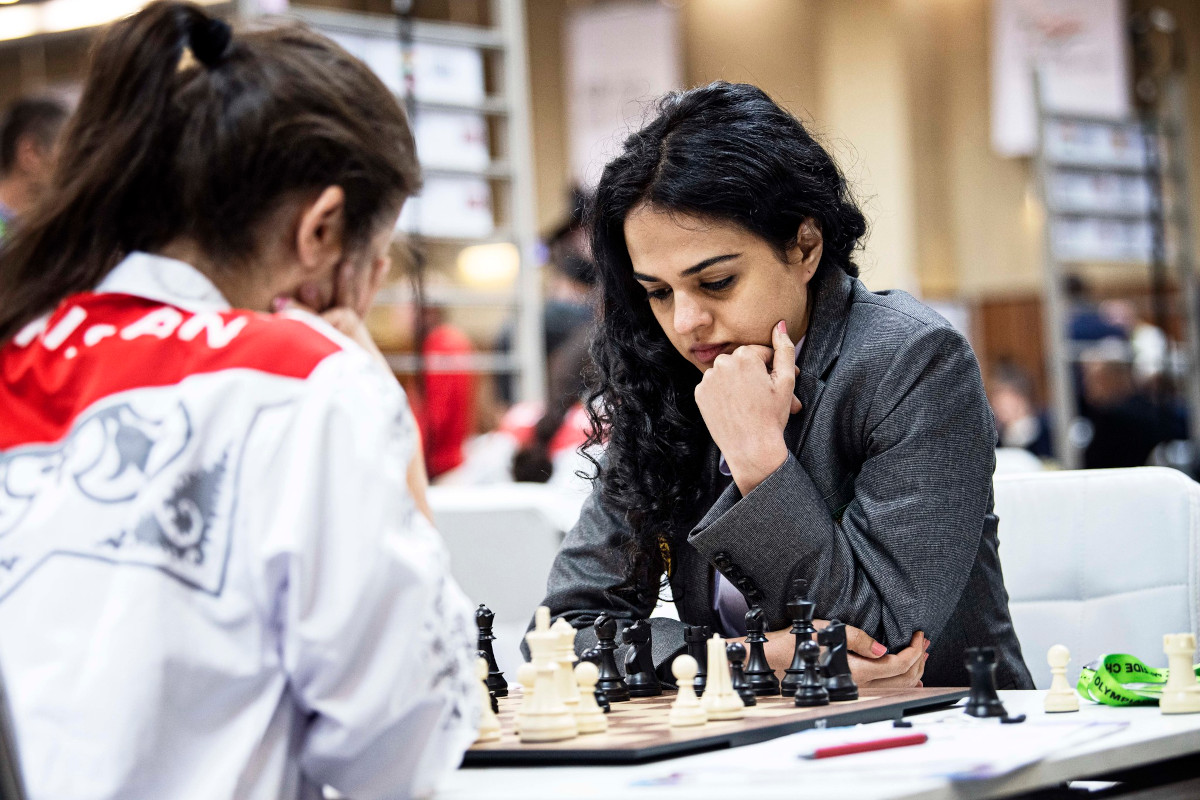 All 24 games played by Indian teams

Endgame riddle solved: Bronstein could have won against Fischer at Portoroz 1958

8 Things We Wish Instagram Would Do to Be Better

8 Things We Wish Instagram Would Do to Be Better

The H8est: The Worst Films of 2021 We Wish We Could Unwatch