The Complete Annotations and Articles by Bobby Fischer


While it has been wonderful to read the blow-by-blow account of the legendary 1972 match in timely articles here at ChessBase News — a match made all the greater by the astounding way it started and unfolded — there have been a number of truly superb works released in the last years to greatly add to the literature on the man and player. Among the many works is one that stands out as the ultimate book for Fischer fans and historians:

by John Donaldson and Eric Tangborn 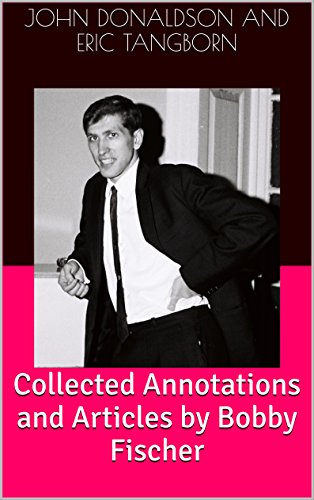 On the surface, this book might seem interesting but not quite deserving of the hyperbole that introduced it. This very large book by the collaboration between IM John Donaldson and IM Eric Tangborn is both a work of love and meticulous research. While it does indeed bring together every article and annotation the great champion wrote and published, it goes well beyond this as well.

Learning from the World Champions

With famous classical examples from the works of the giants, the author talks in detail about principles of chess and methods of play that we can use during every stage of the game.

It also includes the full book Fischer wrote and published when he was 15. Many today don’t even know of its existence as it has been largely ignored in favor of his eponymous Bobby Fischer Teaches Chess (not included) and of course his 60 Memorable Games (also not included). Before playing in the 1959 Candidates, his first, the teen prodigy published a book with his own annotations to 34 of his games, focusing on his US Championship win. Over the years, there had been debate on the authenticity of these notes, but the authors carefully reviewed the records and comments and conclude there is no reason to question it. 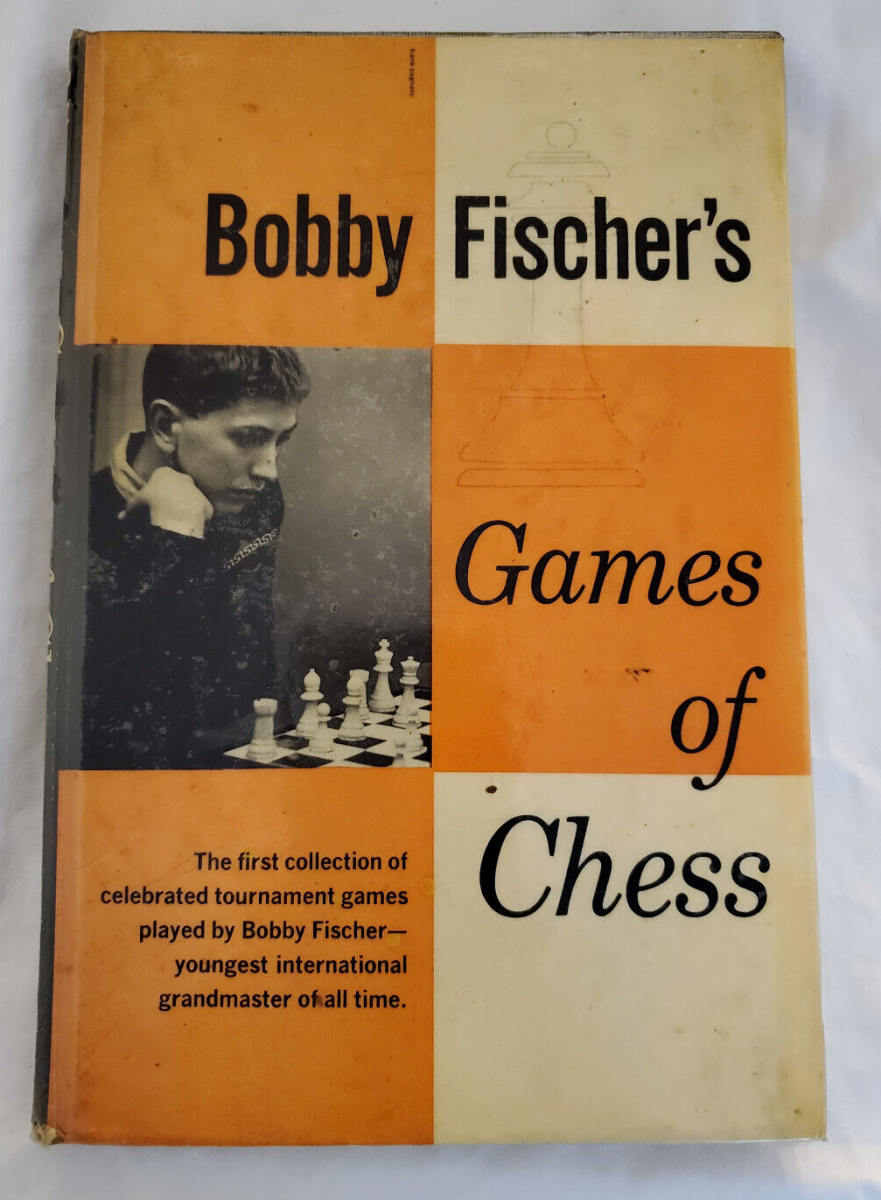 It may not have the soul-searching comments by the much more mature man ten years later, or the depth of chess understanding, but many months were spent on them and they still show how he envisioned a distilled, clear view of the games.

Of course there are the famous articles such as his denunciation of Russian collusion in the 1962 Candidates, published in August, 1962 in Sports Illustrated. 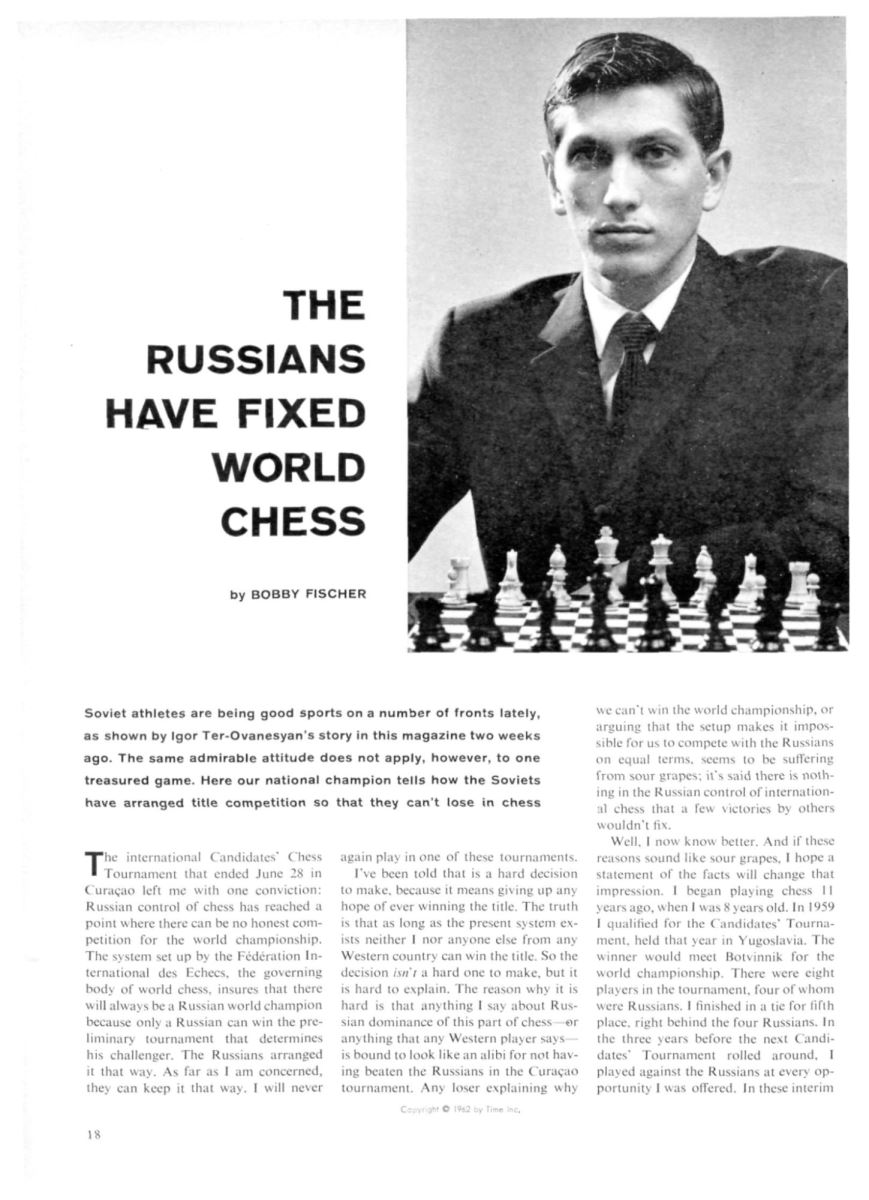 And of course his columns in Chess Life (King’s Gambit Bust anyone?) and Boys Life, not to mention contributions for the American Chess Quarterly and even Chess Informant. All of this makes for fascinating reading, but what really stood out to me was the wealth of material on 60 Memorable Games.

It was stated, absolutely correctly, that the book is not included, but that is only a part of the tale. The World Champion’s most famous book underwent tons of drafts, revisions, and more, including GM Larry Evans’s own introductions, and these revisions include numerous fascinating comments and analyses that were eventually modified, revised, or deleted from the final publication. 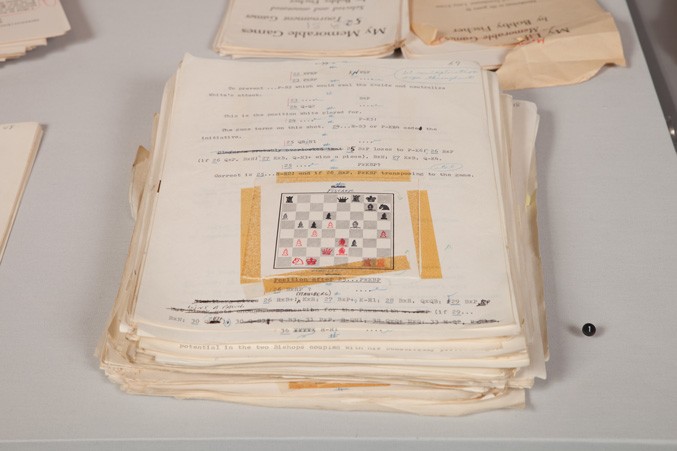 Here are a few random samples:

Though not in the book, the draft reads:

“When I tried to tell people afterwards that the ending was an easy win for Black no one would listen. Tacitly they paid me a negative compliment: “If Fischer couldn’t win it, there’s no win in the position!” But the win is there!”

In the notes found in Mega, I can see Evans stating it was better for Black, but not winning. That said, with no claims to being a GM to argue the point, here is what the engine on my laptop says:

There seems no doubt Fischer was completely right!

It is worth adding that Fischer originally played 33… Rf7, to which Reshevsky replied 34. g4, while the engine recommendation is 33… h5, countering it.

Here is another choice example:

In My 60 Memorable Games Bobby writes:

“The only move. Gligorić was so sure I’d “find” it that he wrote it down on his scoresheet while I was taking a minute to look for something better.”

In the draft he had more to say at the end of this that was cut out of the book:

“I’ve trained myself to stop and look even if there seems to be only “one move”, unless it’s a forced recapture. You never know!”

Whether this was removed for space issues it is impossible to know, but it is valid advice. Perhaps he felt he had already mentioned this in a previous game, but contrary to general advice, this is an insightful comment on Fischer’s own lessons applied to his personal thinking.

Finally, there a fascinating comment from his game against Tal in 1961 that never saw the light of day:

The following note from the draft was removed:

“Tal has an annoying habit of writing down the move he intends to play before making it. As a consequence, his scoresheet is an eyesore. He usually wrote lemons down on the first draft, reserving the move he actually selects until somewhere around the fourth chicken scratch. Unfortunately, the temptation to glance at his scoresheet is overwhelming; I got excited when I saw him write down 20…Ra5.”

There are multiple reasons one can speculate it was removed, such as not wanting to seem like he was attacking Tal in his major work, since they were noted friends. During the 1962 Candidates, when Tal was forced to leave due to illness, Fischer was the only contestant to visit him in the hospital. 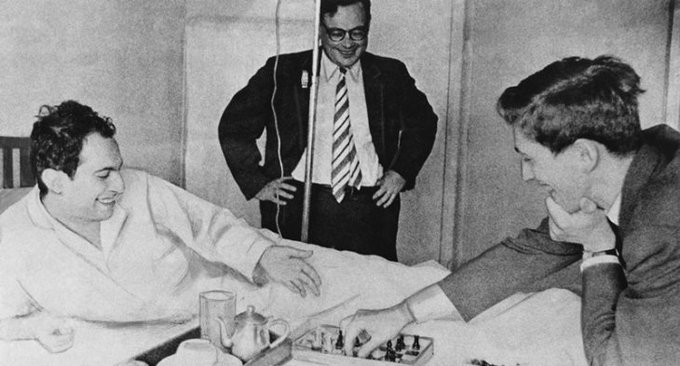 Whatever the reason, it is still a fascinating insight on both players, from Tal’s noted mannerisms, to the effect this had on a young Bobby Fischer.

These are but the briefest and most superficial highlights of what is a well-researched work that does far more than just bring together his writings. It brings perspective, comparative analysis, and commentary. The book only exists in digital format, but is a must-have for anyone interested in what Fischer had to say about chess and more, and is very affordable.

You can buy ‘Collected Annotations and Articles by Bobby Fischer’ here

‘I have voted for Robredo but…’

‘I have voted for Robredo but…’

Tito Sotto Says He, Ping Lacson are ‘Secret’ Candidates of other Senators

Dillon Brooks Addresses Steve Kerr: ‘I Don’t Even Know What That Means”