Thanks to a draw against direct rival Andrey Esipenko, Le Quang Liem grabbed the Grandmaster Triathlon title at the Biel Chess Festival. The Vietnamese star, who had a convincing performance throughout, proved to be the strongest player in both classical and rapid chess. The podium was completed by Russia’s Andrey Esipenko and India’s Gukesh Dommaraju.

The strong Masters Tournament was surprisingly won by Mahammad Muradli from Azerbaijan, ahead of Kirill Alekseenko from Russia and Shant Sargsyan from Armenia. In the Amateur Tournament, the Indian pair of Manmay Chopra and Harisurya Bharadwaj Gundepudi won ahead of Majed Al Helaoy from Syria. 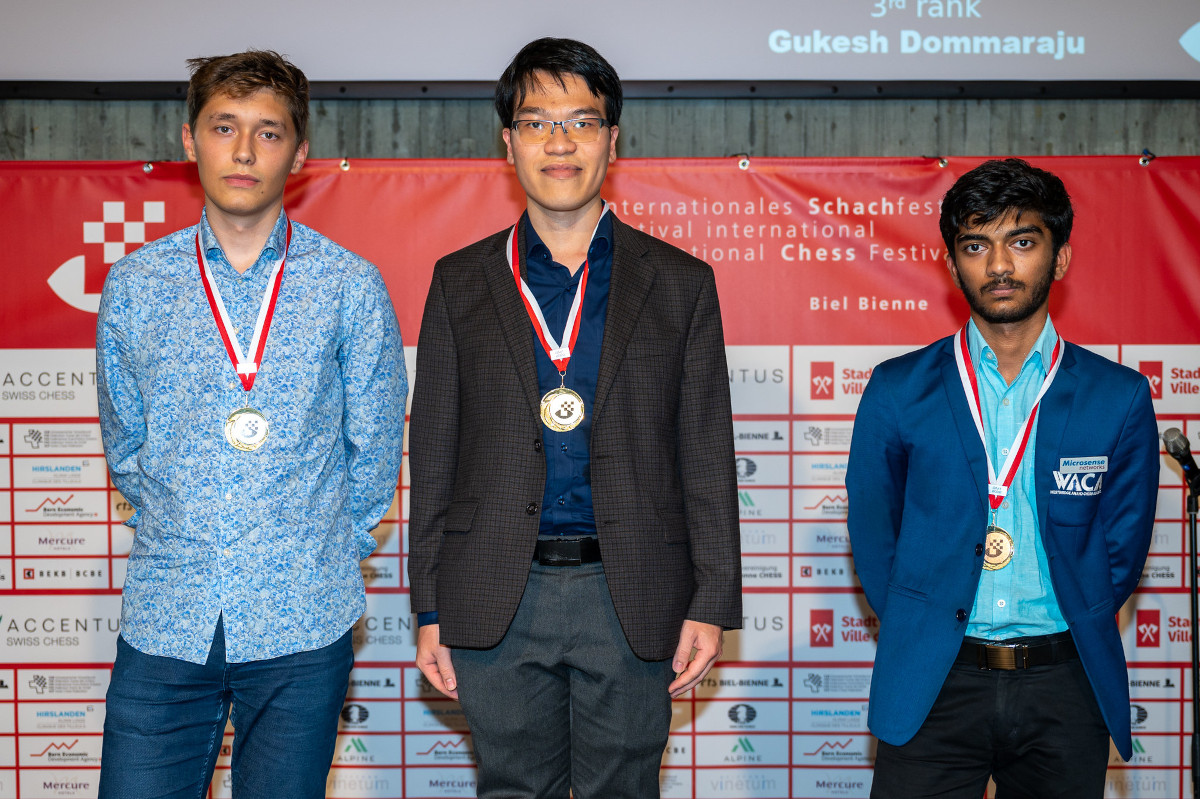 Le saves a draw to win it all

After collecting three wins in a row, Le Quang Liem was the favourite to win the Triathlon going into the final round. The Vietnamese faced direct rival Andrey Esipenko with black, when a win for Esipenko would give him tournament victory. Le was in trouble in an extremely complex game, but he found the resources to draw and thus win the tournament.

Gukesh had a good position with black against Salem, but lost control and went on to lose the game. He nevertheless retained third place, as fourth-placed Nodirbek Abdusattorov was defeated by defending champion Gata Kamsky.

Much like Kamsky, Arkadij Naiditsch saved the best for last as he convicingly beat Vincent Keymer with white to leave the cellar of the standings.

The podium remained unchanged throughout the tournament, but the order was uncertain until the very end.

As part of FIDE’s Year of the Women in Chess, the Ladies ACCENTUS Quadriathlon took place at the Biel Chess Festival with eight young talents.

The Swiss representatives were ruthless in the last round. Zhuang defeated Ciarletta with black, and overtook her in the standings to claim overall victory. Tamrazyan Gohar moved up to third place by beating Yulia Avilova. Juliette Cornileau, who entered the round in third place, lost to Laura Sumarriva. Margaux Moracchini only got a draw against Cecila Keymer, when a win would have allowed her to share third place in the final standings. 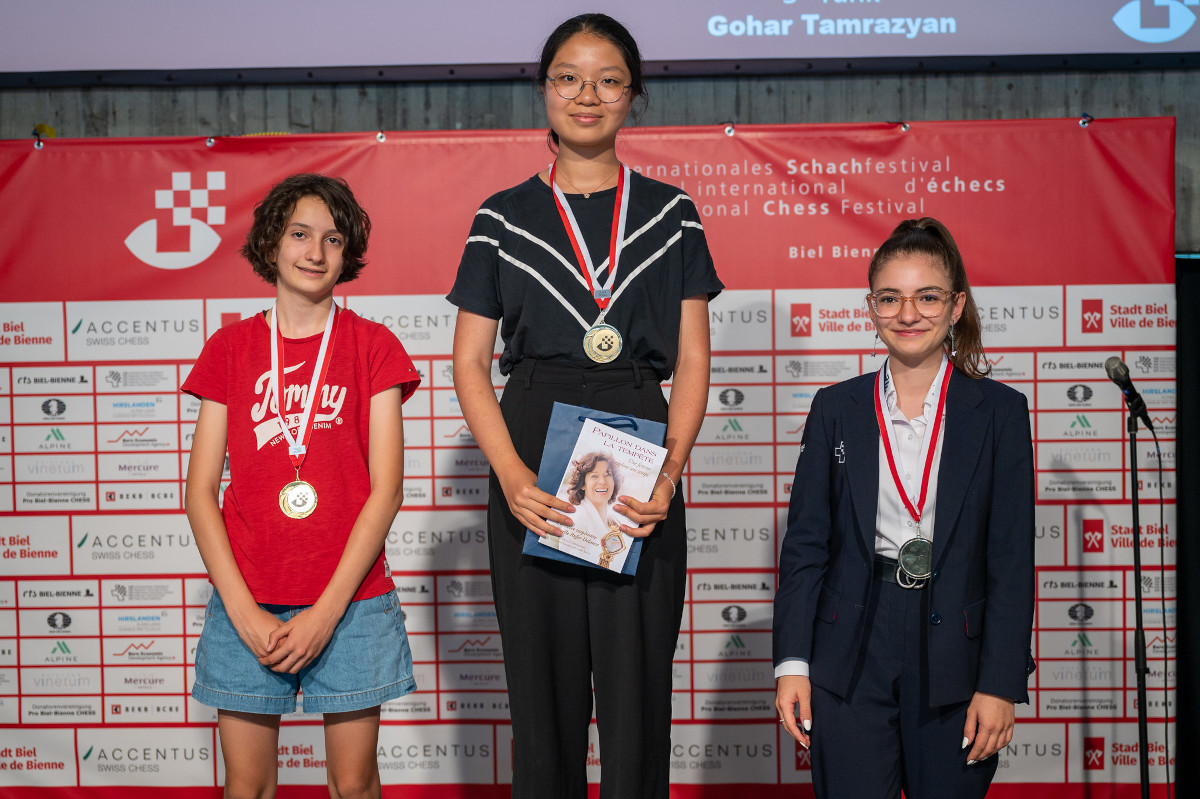 Kirill Alekseenko playing with the white pieces was the favourite in the top-board game against Mahammad Muradli, but failed to make the most of his chances in zeitnot and had to settle for a draw. The two players tied for first with 7/9 points, after draws were seen on boards 2 and 3. The Azerbaijani grandmaster had a better tiebreak score and emerged victorious.

A breathtaking performance from Muradli, who was the 21st seed with a 2523 rating.

Out of the six chasers with 6½ points, it was Armenia’s Shant Sargsyan who grabbed third place. The Indians, who had a strong start, were finally unable to reach the podium. Visakh, Sethuraman and Mendonca finished fourth, fifth and sixth respectively.

The top scorers among the 21 Swiss representatives were Gabriel Gähweiler and Igor Schlegel, both finishing the tournament with 5 points to their names. 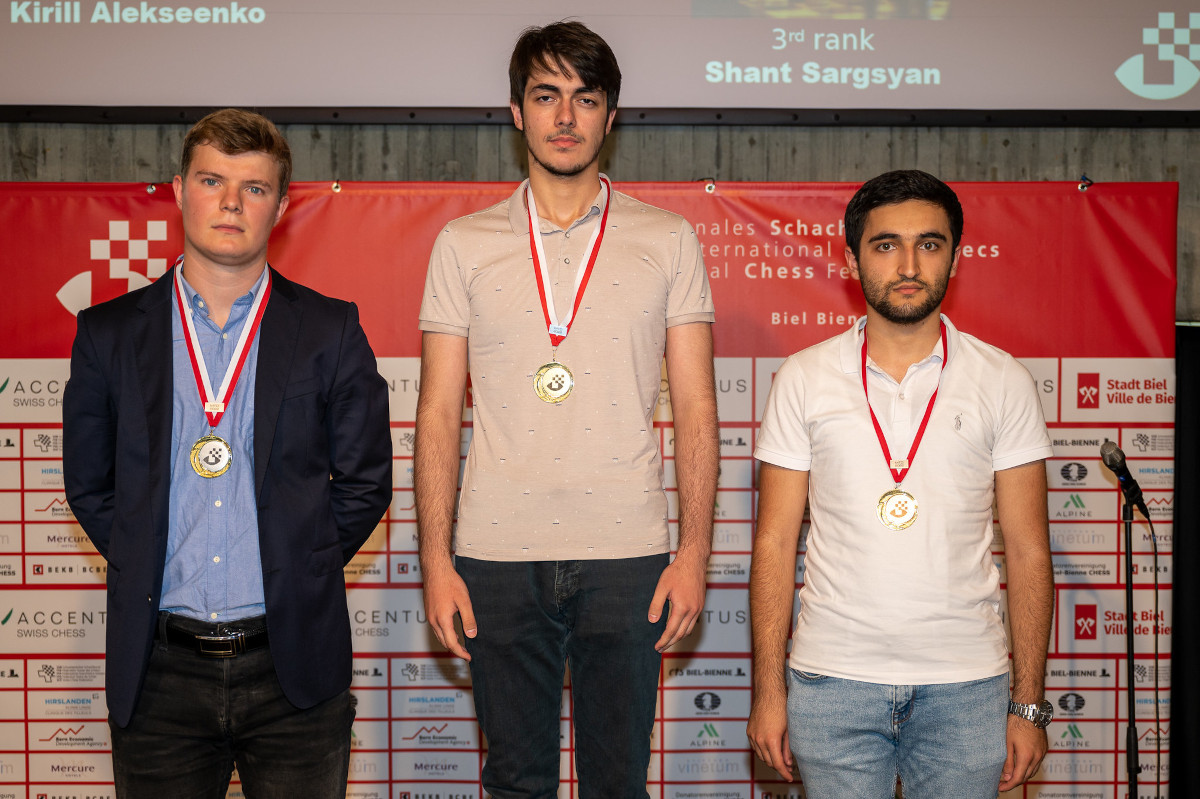 All available games – Round 9

Practicing and improving with Fritz Online