The Sparkassen Open A is one of many tournaments taking place as part of the massive festival in Dortmund.

In the seventh round, Max Warmerdam rejected an early draw offer from Thomas Beerdsen and won the Dutch duel in remarkable fashion. He presented his kingide attack in an interview after the game.

For Thomas Beerdsen, a final GM norm is therefore no longer possible in Dortmund. GM Andreas Heimann is on 6 out of 7, as is FM Jasper Holtel, who is playing an outstanding tournament so far.

Replay all games from the Sparkassen Open-A tournament

A special guest had the honour of making the first move for Viswanathan Anand on Friday. Nenad Tomasev, programmer at DeepMind, is currently a guest at the International Dortmund Chess Days. He is one of the brains behind the famous artificial intelligence AlphaZero, and in this capacity he already analysed the No-Castling Chess games with Vladimir Kramnik and press spokesman Patrick Zelbel last year. Today he was also a guest on the live commentary booth and reported on exciting projects in the field of artificial intelligence.

For Anand, as he usually does in No Castling chess, he opened with 1.c4, and an isolated-pawn position developed early on in his game against Dmitrij Kollars. Kollars defended skilfully, activated his rook and held a draw. Another exclamation mark for Kollars, who is only half a point behind the leader Anand.

Pavel Eljanov chose the solid Berlin Wall for the top pairing in the German Grand Prix. McShane gained an advantage and tried to get something going for long. But in the rook ending with two pawns against one, there was no way to win. Thus, last year’s winner Eljanow is in the race with good prospects. McShane is currently in the lead, but has only one game left and is free on Sunday. 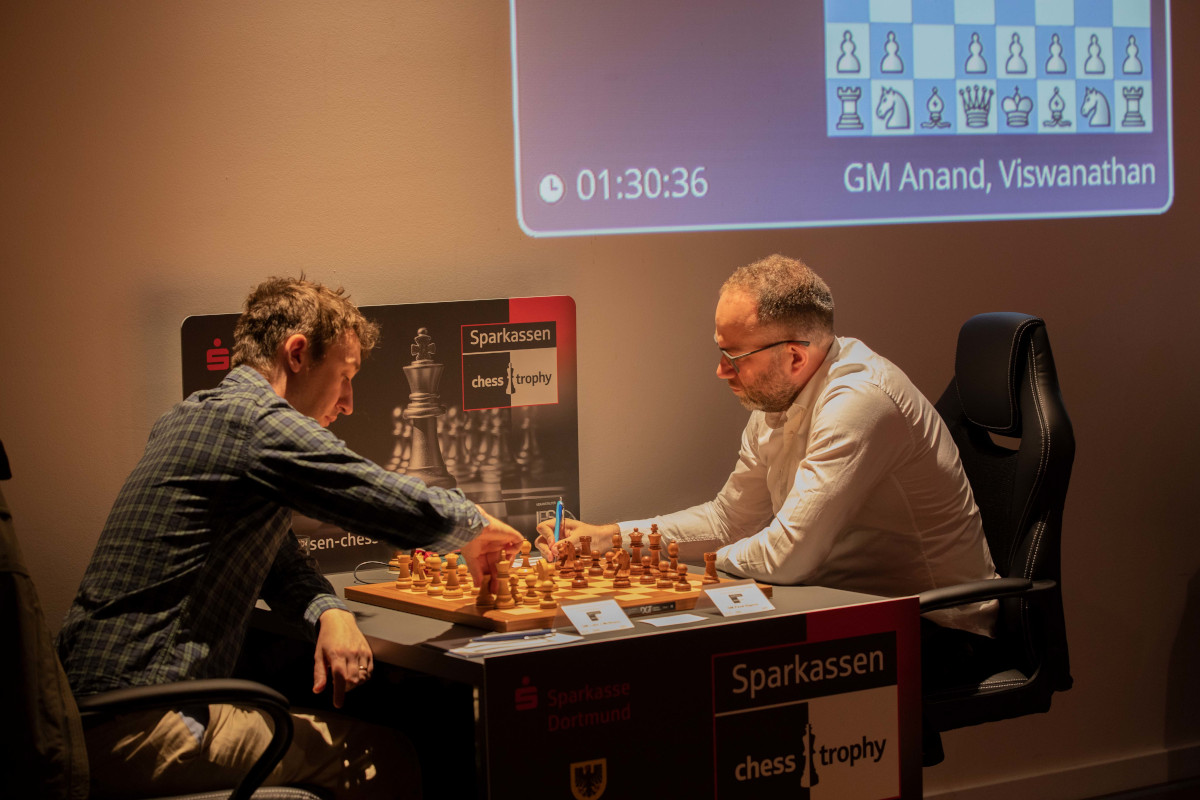 In the Sportland NRW Youth Cup, the trend of the last days intensified: IM Jonathan Carlstedt seems to be in excellent shape, as he won his third game in a row and leads Artem Lutsko by a full point. An IM norm is still possible for the U16 player. To get it, he needs 1½ points in the last two rounds.

Lara Schulze leads by half a point over local hero Zoya Schleining in the closed women’s tournament. Fittingly, the direct duel between the two players will take place in the last round on Sunday. Lara Schulze also needs 1½ points in two games to get a WGM norm — the Sportland NRW Women’s Cup is the only round-robin tournament in Germany in 2022 where this norm is possible.

How to Win in Equal Positions: for Club Players