With contributions by Prof. Nagesh Havanur

After five games the score was level (2½-2½). But it was Bobby who had seized the initiative in game six, played on July 23 1972, and held the psychological edge on and off the board. His ceaseless demands before the world championship had created enormous tension for Boris Spassky.

To add to his worries there was uncertainty whether the match itself was going to take place or not. How does one prepare for a match when the opponent does not even deign to turn up for the opening ceremony? In fairness to Bobby, he did make an apology to Spassky, but soon he was back to his usual self, as the enfant terrible! His brinkmanship, forfeiting the second game and throwing tantrums during the third, destroyed Spassky’s mental equilibrium altogether.

To add to his woes, Boris was under tremendous pressure from the Soviet authorities to quit rather than submit to Fischer’s ever changing demands. Spassky: “A few days before the third game I spoke for half an hour on the telephone with Pavlov [Sergei Pavlov, Sports Minister of the USSR], who demanded that I issue an ultimatum that neither Fischer, nor the organisers, nor even the FIDE President, Max Euwe, could accept. That would have ended the match. So our whole conversation consisted of an unending exchange of two phrases: ‘Boris Vasileyvich, you must issue the ultimatum!’ – ‘Sergey Pavlovich, I am going to play the match!’ After this conversation I lay in bed for three hours. I was shaking. I saved Fischer, by playing the third game. In essence I signed the capitulation of the whole match.”

Decades later he summed up his dilemma, “There was only one way I could have won that match: before the third game, when Bobby began complaining, I could have refused to play on and forfeited the game. I thought of doing this, but I was the chess king and I could not go back on my word. I had promised to play this game. As a result I ruined my fighting mood…”” 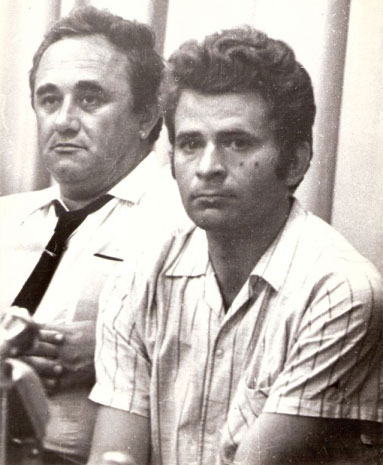 The fourth game, a tense draw, failed to restore his spirits. Efim Geller was Spassky’s friend and faithful second. He had prepared a line to bust the Sozin Attack that Fischer played all his life. When the position appeared on the board Boris took 45 minutes, deviated from the line they had worked on, and allowed Bobby to escape with a draw.

For Geller it was particularly galling. His rivalry with Bobby went back to the 1960s, and Bobby had last beaten him in the Interzonal 1970. Then came the fifth game that broke his back. Spassky could have reveled in a sharp tactical duel, but instead was outplayed in a long maneuvering battle, and put out of his misery in the end by a blunder.

The sixth game saw the World Champion still groggy and reeling from shock after all the body blows that he had received. But what about Bobby? He could hardly play 1.e4 without running into another Sicilian mine-field prepared by Geller & co. So he launched a Plan B, opening with 1.c4. That shouldn’t have been a surprise to Spassky and Geller. Bobby had played the English Opening against Polugaevsky at the 1970 Interzonal, his opponent securing a draw only after some unease with his position. Bobby repeated the same opening in the last round against Oscar Panno, who protested the change in tournament timings and forfeited his game.

All this should have put the Russians on guard. It didn’t. In the ensuing Candidates Matches with Taimanov, Larsen and Petrosian Fischer had opened only with 1.e4. So the possibility of Bobby moving anything other than the king pawn was not considered as seriously, as it should have been. Only Geller was worried as he wanted Spassky to be prepared for any eventuality. However, Boris remained complacent. Whenever his seconds asked him: “What if Bobby plays 1.d4?” he would give the same lazy answer, “I shall just play the Makogonov-Bondarevsky System. What can he get from it?” Geller for one knew how wrong he was and showed him the following game:

A curious game marred by mutual errors in the end! Yet Geller was sufficiently disturbed by the collapse of his favourite defence to Queen’s Gambit. A connoisseur of opening theory, he annotated his loss in the Chess Informant offering an improvement for Black that eventually turned out to be insufficient. 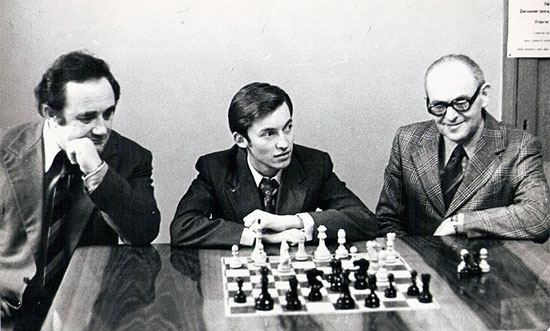 Geller and Furman, with with the young Anatoly Karpov, for whom Furman was a mentor.

Across the ocean, thousands of miles away, there sat an American grandmaster looking at the same game on his pocket chess board and his eyes lit up. That was Bobby. He had found a way of beating Boris! But how did he know Boris would play the line? The answer lay in the Red Book, the Spassky Bible that he devoured day and night. 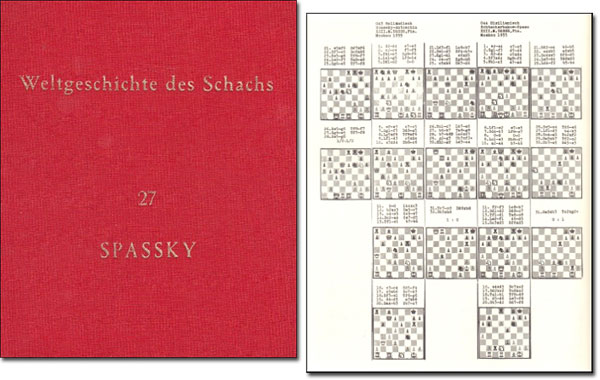 In the 1950s, Dr. Edward Wildhagen announced an ambitions project entitled “Weltgeschichte des Schachs” which means “World History of Chess”. His plan was to include every game ever played by great masters with a diagram every five moves, so that one could play over the games without setting up the board and pieces. There were 16 volumes published in this series, each dedicated to one great player. In the book Bobby found twelve games played by Spassky, none of which he lost, but there were no wins either: it was part of his drawing arsenal. The Furman-Geller game gave Bobby an idea on how to draw Boris out of his protective shell. 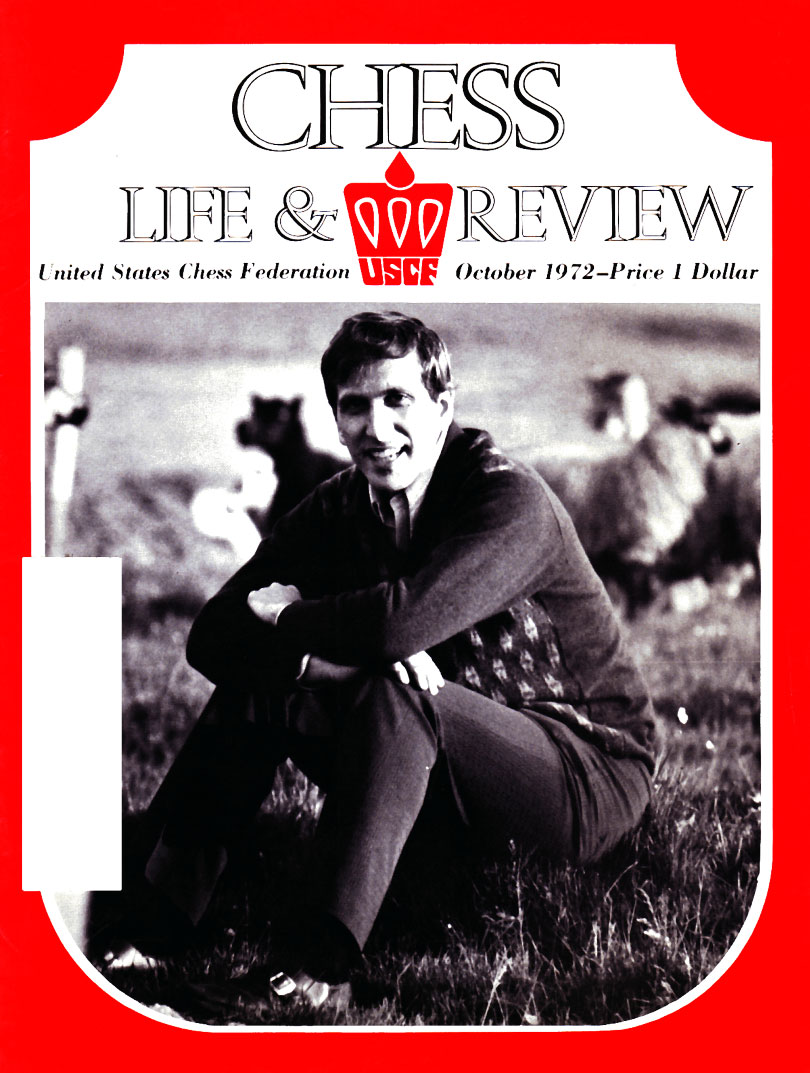 What followed in Game Six of the Match is eloquently described in a report by GM Robert Byrne in Chess Life & Review, October 1972, pages 607-609 (the pages of CL&R were numbered through for the entire year, at that time):

The biggest blow to Spassky’s self-assurance was game six. For the first time in his life, Bobby played the Queen’s Gambit, having always maintained that it was “dull and a draw.” And he beat Spassky, who had never lost a game with his favorite Tartakower Variation! The bare facts are no dazzling they need no embellishment. Just play over the game. 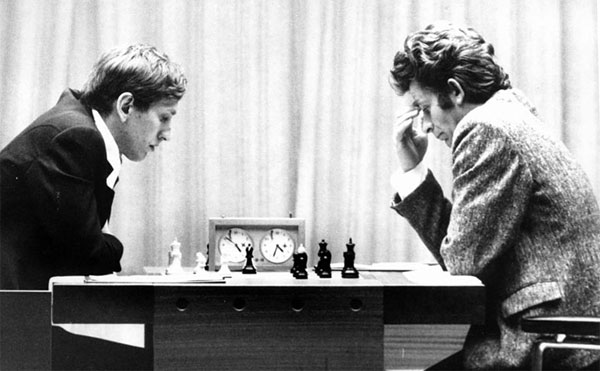 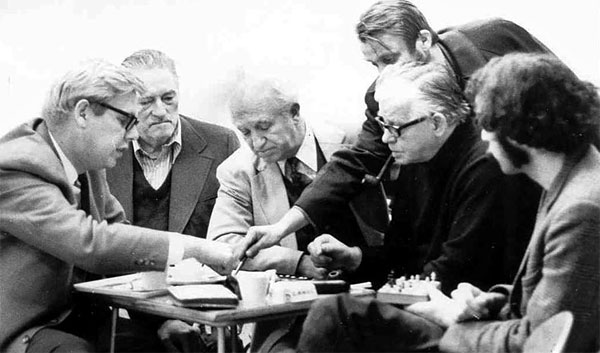 Game six was a classic that Miguel Najdorf, above in the middle, during the match in Reykjavik, likened to a symphony by Mozart! The sixth game has been annotated by a number of contemporaries like Samuel Reshevsky, Reuben Fine, Svetozar Gligoric, C.H.O’D Alexander and others. 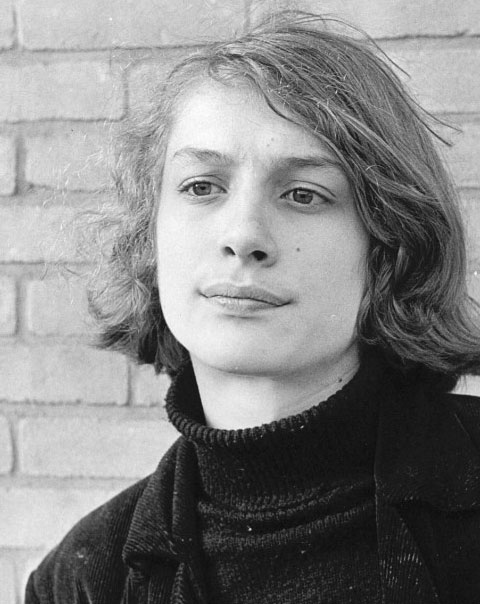 Around the same time young Jan Timman [above in a 1968 picture by Chess Diagonals] made an independent investigation of the whole game, and his example was emulated by Yasser Seirawan and Graham Burgess who also provided a useful correction to previous analysis. The last word on it all was by Garry Kasparov. ChessBase offers an update:

Here are the times for game six, as recorded by Lawrence Stevens, who visited the match in Reykjavik and jotted them down from the video screens:

This game had an unintended aftermath. When Boris returned despondent after the game, Geller asked him why he had not played 14…Qb7 that could have refuted the entire concept of 14.Bb5!? After all he had analysed the whole variation with Boris during their preparation for the match. The world champion had not cared to remember and in any case it was the last line he was prepared to see on that fateful day. A year later Jan Timman tried the same thing against Geller, and the mine that had been set for Fischer exploded. Here is the game:

It’s a pity that Spassky did not benefit from Geller’s discovery. As for Bobby, he wisely refrained from repeating Furman’s novelty during the rest of the match.

Opening theory has advanced a lot since 1972, but if you want to learn how to play the Queens Gambit, you can do it from one of the best possible authorities: Garry Kasparov:

Bobby Fischer in Iceland – 45 years ago (1)
In the final week of June 1972 the chess world was in turmoil. The match between World Champion Boris Spassky and his challenger Bobby Fischer was scheduled to begin, in the Icelandic capital of Reykjavik, on July 1st. But there was no sign of Fischer. The opening ceremony took place without him, and the first game, scheduled for July 2nd, was postponed. Then finally, in the early hours of July 4th, Fischer arrived. Frederic Friedel narrates.

Bobby Fischer in Iceland – 45 years ago (2)
The legendary Match of the Century between Boris Spassky and Bobby Fischer was staged in the Laugardalshöllin in Reykjavik. This is Iceland’s largest sporting arena, seating 5,500, but also the site for concerts – Led Zeppelin, Leonard Cohen and David Bowie all played there. 45 years after the Spassky-Fischer spectacle Frederic Friedel visited Laugardalshöllin and discovered some treasures there.

Bobby Fischer in Iceland – 45 years ago (3)
On July 11, 1992 the legendary Match of the Century between Boris Spassky and Bobby Fischer finally began. Fischer arrived late, due to heavy traffic. To everybody’s surprise he played a Nimzo instead of his normal Gruenfeld or King’s Indian. The game developed along uninspired lines and most experts were predicting a draw. And then, on move twenty-nine, Fischer engaged in one of the most dangerous gambles of his career. “One move, and we hit every front page in the world!” said a blissful organiser.

Bobby Fischer in Iceland – 45 years ago (4)
7/16/2017 – The challenger, tormented by the cameras installed in the playing hall, traumatically lost the first game of his match against World Champion Boris Spassky. He continued his vigorous protest, and when his demands were not met Fischer did not turn up for game two. He was forfeited and the score was 0-2. Bobby booked a flight back to New York, but practically at the very last moment decided to play game three – in an isolated ping-pong room!

Bobby Fischer in Iceland – 45 years ago (5)
7/21/2017 – After three games in the Match of the Century the score was 2:1 for the reigning World Champion. In game four Spassky played a well-prepared Sicilian and obtained a raging attack. Fischer defended tenaciously and the game was drawn. Then came a key game, about which the 1972 US Champion and New York Times and Chess Life correspondent GM Robert Byrne filed reports. In Reykjavik chess fan Lawrence Stevens from California did something extraordinary: he manually recorded the times both players had spent on each move.

Will the Nets trade Ben Simmons after an underwhelming season?