On Thursday, there was only one game on stage in the Golden Hall: the two winners from the previous day, Dmitrij Kollars and Viswanathan Anand, met in the NC World Masters.

Both had been victorious the day before and wanted to carry the momentum with them. Kollars played an interesting opening idea with an early f3, as he wanted to give his king the option to move to f2. Anand responded with a variation that forced the exchange of queens. Kollars had a slight advantage in the resulting rook ending, but Anand defended very carefully.

So the game ended in a draw. Halfway through the tournament Vishy Anand is in the lead with half a point ahead of Dmitrij Kollars and Michael Adams.

Note that Anand vs. Kollars is a first-round game, which was rescheduled due to Vladimir Kramnik’s absence

Lara Schulze scored her third win in a row in the closed Women’s Sportland NRW Cup. For a second day in a row, she played a modern pawn sacrifice in the Advance Variation of the French Defence with White. Honorata Kucharska’s long castle was probably not a good choice. The black king was never safe, and Schulze played a beautiful attacking game.

This gives her a one-point lead with 5 out of 6 points to her name. Apart from the tournament win, she is looking to get a WGM norm — she needs 7 points in 9 rounds to earn it.

In the Sportland NRW Youth Cup, Thursday’s top pairing was a hard-fought encounter. Artem Lutsko, playing Black, came out of the opening quite well, but played inaccurately in the middlegame. IM Jonathan Carlstedt was able to build up a strong attack with his heavy pieces and won the game.

Warmerdam leads ahead of Beerdsen

GM Max Warmerdam was well-prepared for the top match against GM Tornike Sanikidze in the sixth round of the A-Open. Warmerdam had an early advantage. Sanikidze complicated the game, but the Dutchman kept the edge and is now the only player in the A-Open with a perfect score.

On board 2, IM Thomas Beerdsen beat GM Dr. Florian Handke with the black pieces. Beerdsen is now in sole second place, half a point behind Warmerdam, and there will probably be a Dutch duel on the first board tomorrow. 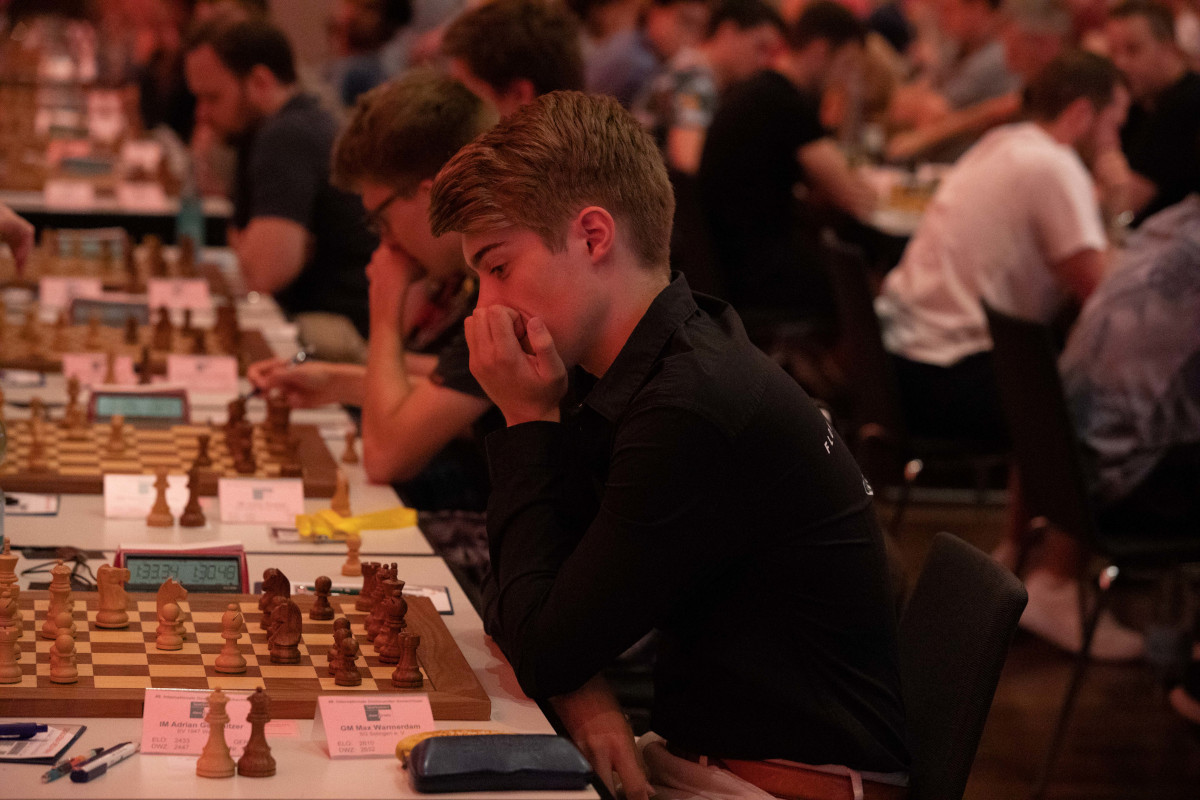 In the Sparkassen Open B, young Ukrainian Artem Dyachuk continues to dominate, as he also has collected 6 points in as many rounds. Similarly to the A-Open, there is only one chaser with 5½ points in this event: Niels Wenning, who will face Dyachuk with white on Friday, starting at 10:30 CEST.

On Friday, Anand will play white against Kollars, while the Deutschland Grand Prix participants will return after their rest day. Luke McShane will face Pavel Eljanov!