What an opening by the World Champion! Perfectly prepared he went into the game against Daniel Fridman in the No-Castlin World Masters. He took a close look at the first game played by the player from Bochum — against Michael Adams — and had an improvement ready in 6.Ke2. In the post-game interview, he explains his thought process.

The second game in No-Castling Chess also had a deserving winner: Dmitrij Kollars recovered perfectly from his defeat the day before. He brought his king to f2, and activated all his pieces. Adams, on the other hand, had big problems with his rook on h8. In the end, the rook had to move to h8, his own king to h7 and in the centre Kollars practically was left with an extra rook. He confidently converted his advantage in the endgame.

Kollars is particularly looking forward to his duels with Viswanathan Anand in the next two days. So far, Anand is unbeaten in all official No-Castling chess games. Kollars will try to change that. 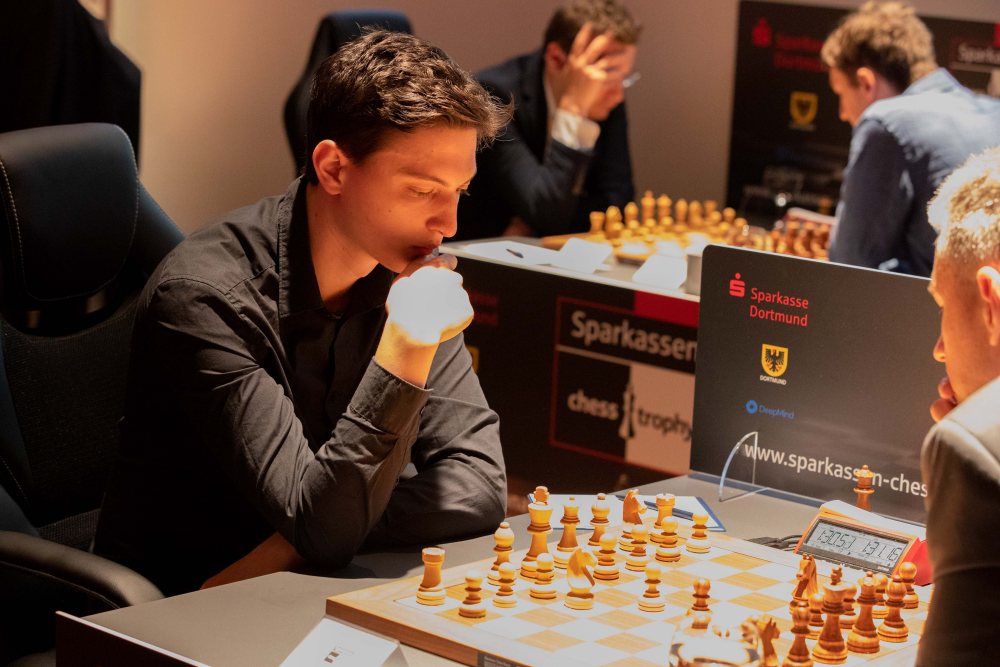 Eljanov and McShane up the pressure

Last year’s winner Pavel Eljanov from Ukraine and Englishman Luke McShane got off to strong starts in the Deutschland Grand Prix. On Wednesday, once again, both were in control: McShane gained a small advantage against Erwin L’Ami, and Eljanov did the same against Bogdan-Daniel Deac.

But L’Ami and Deac both held the endgames with good technique. The duel between the German national players Svane and Blübaum also ended peacefully. Thursday is a rest day in the Deutschland Grand Prix.

Change of leadership in the Sportland NRW Cup

The fifth round shook up the standings. Artem Lutsko beat the previous leader FM Christoph Dahl. In a Najdorf-Sicilian, Dahl played the typical piece sacrifice Nd5, which did not pay off and Lutsko took the material. IM Jonathan Carlstedt scored his second win of the tournament against the youngest participant in the field. So the top 3 are now as follows:

In the Sportland NRW Women´s Cup, FM Lara Schulze was able to continue her run. The opening was very complex and objectively Anastasiya Rakhmangulova had an advantage with her extra pawn. But Schulze caused her problems and managed to win the game.

Warmerdam and Sanikidze lead in Sparkassen Open A

The two grandmasters were able to beat the two German International Masters Julian Kramer and Adrian Gschnitzer in the top pairings of the A Open. So the leaders will face each other in a crucial duel in the sixth round.

IM Thomas Beerdsen also seems to be in top form. He now has 4½ / 5 points after winning his round-5 game with a strong attack against Alexey Wagner.

Srisaket Sor Rungvisai vs. Carlos Cuadras on Feb.5th in Phoenix, Arizona on DAZN