Seven and a half years ago, Wei Yi won the Tata Steel Challengers with an undefeated 10½/13 score and a tournament performance rating of 2804. Two months later, he would become the youngest-ever player to cross the 2700-rating barrier. He was 15 years old. Following his rapid ascent, he was expected to reach the elite in no time. But becoming a top-10 player is a tall order. Wei’s peak rating of 2753 was achieved in August 2017, but he never quite managed to break through to the very top.

The talent of the Chinese star has never been in doubt. In fact, perhaps his insistence on playing sharp games might have to do with his inability to further climb up the rating ladder. Nonetheless, since August 2016 he has never fallen below the 2700-mark, which is a remarkable feat in itself — two consecutive subpar performances are more than enough to lose plenty of rating points.

Now, in his second participation at a Meltwar Chess Tour event, the 23-year-old has reached the final. Moreover, commentator Peter Leko has been praising Wei’s play, noting that he seems to have substantially improved in the last year and a half.

With his victory over Richard Rapport, Wei qualified to the FTX Crypto Cup, which is set to take place in Miami next month. Given the strict Covid-19 restrictions in China, he was asked if he would be able to make the trip. A smiling Wei responded, “I think I can go”. 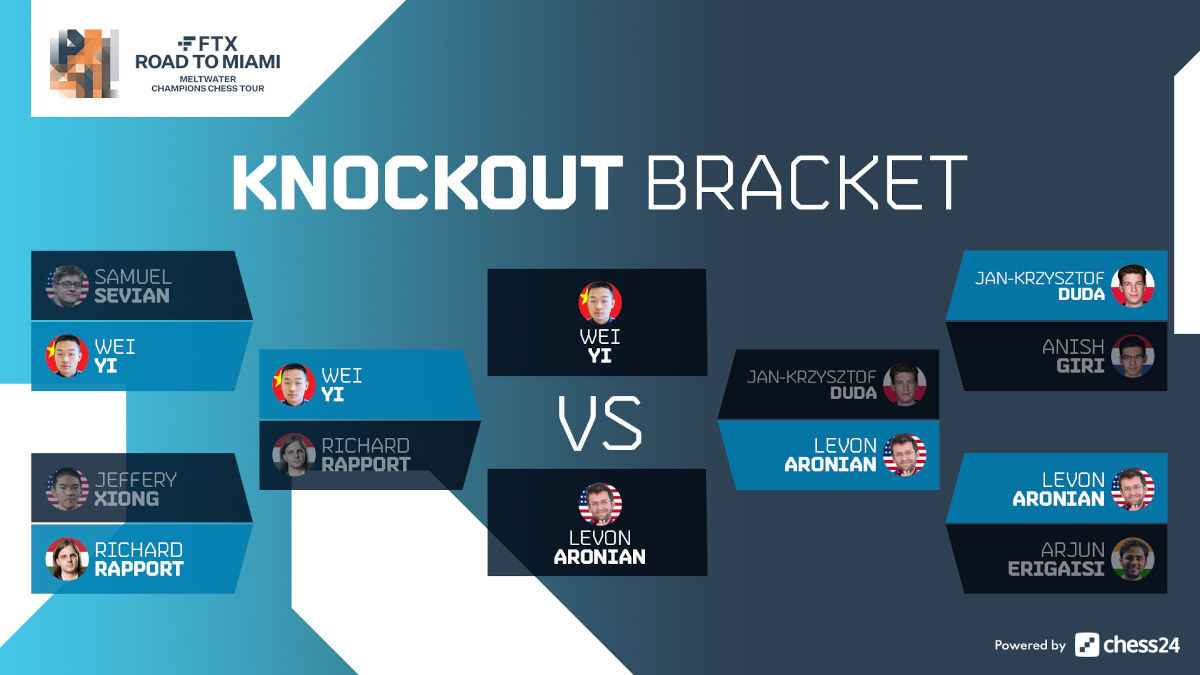 Back-to-back wins in games 2 and 3 gave Wei the ticket to the final. The consecutive wins followed a 129-move draw in game 1, when the Chinese was trying to convert an endgame with rook and two extra pawns against a pair of minor pieces.

In a sharp second game, Wei prevailed with the black pieces after effectively dealing with Rapport’s strong initiative in the early middlegame. Finally, in game 3, the Hungarian faltered early on, out of a double-edged Sicilian.

White has just captured a bishop with 14.Bxa7, and 14…Rxa7 would simply keep the game going with chances for both sides. Rapport’s 14…Nxf4, on the other hand, was a tactical error. After 15.Qf3 Nxd3+ 16.Rxd3, Black cannot restore the material balance.

16…Nxa7 would fail to 17.Qxa8, while Black cannot both capture the bishop and defend the attacked knight. Rapport perhaps counted with 16…Rxa7 17.Qxc6 Bd7, but White has 18.Qb6 (attacking the rook) Qb8 19.Qa5, defending everything.

Rapport had not foreseen all the sub-variations and simply found himself a piece down. The rest was not at all trivial, but Wei continued to show excellent calculation abilities until getting a 36-move victory.

Despite his slow start in the semis, Levon Aronian has shown his usual (strong) level in the knockout stage of the event. After knocking out an in-form Arjun Erigaisi on Thursday, he twice defeated Jan-Krzysztof Duda with the black pieces to move on to the finals.

In game 2, the Armenian-born star saw his opponent missing a chance to save a draw in a rook endgame. Duda was a pawn down, but as GM Karsten Müller demonstrates in his analysis below, he could have kept the balance with the correct technique.