The volatility of rapid chess

Rapid time controls lead to mistakes, even at the highest level. The quarterfinals of the FTX Road to Miami online event featured a number of missed opportunities and tactical fireworks. But incredible finds were also in the menu. Once the action came to an end, all four rating favourites had moved on to the semifinals.

The two-stage format used in the Meltwater Champions Chess Tour means a full-on reset takes place once the preliminaries are over. At the qualifying event to the FTX Crypto Cup, the top two scorers from the prelims were knocked out in quarterfinals. Sam Sevian and Arjun Erigaisi could not keep up their good runs from the first four days of action, as they were eliminated from the competition by Wei Yi and Levon Aronian respectively.

Jeffery Xiong, who finished day 1 in the lead, also lost — in blitz tiebreakers, against Richard Rapport. The one case of the younger opponent winning his match on Thursday was that of Jan-Krzysztof Duda, who got the better of Anish Giri. 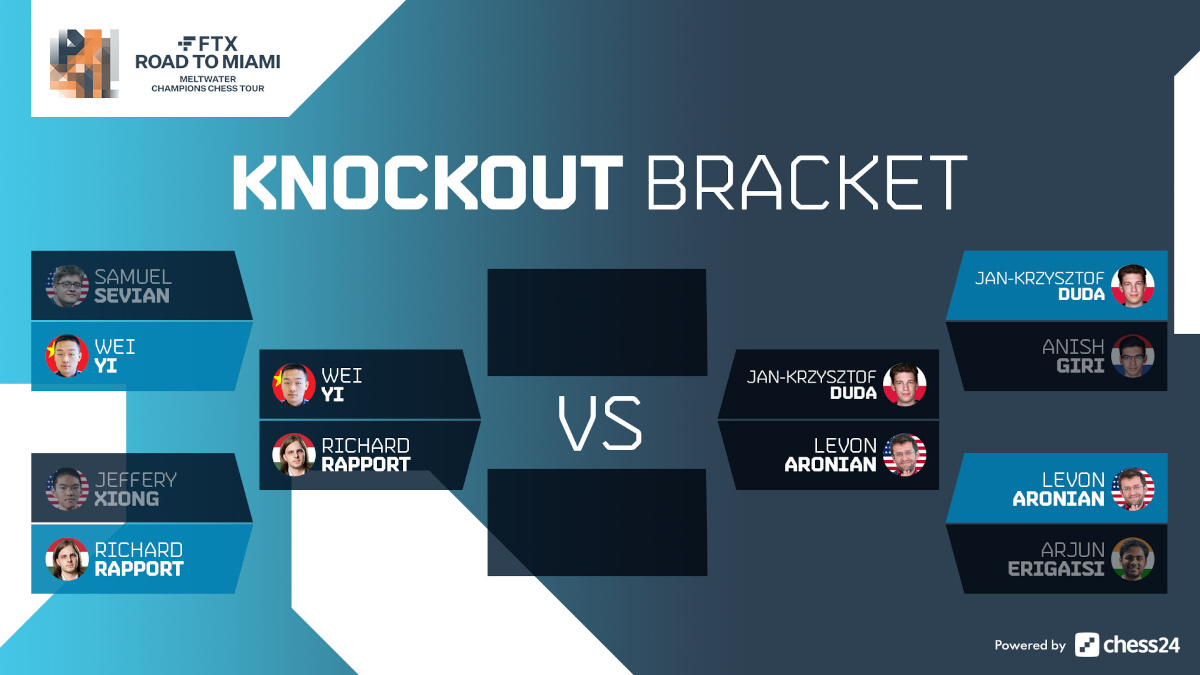 This was pound-for-pound the most exciting match of the quarterfinals. A rollercoaster first game in which both players missed tactical blows finished drawn. Game 2 saw Sevian getting his tenth victory of the event — yes, he won nine games in the 15-round prelims. A draw followed, and Wei managed to win on-demand to tie the score in the fourth rapid game of the confrontation.

The Chinese star carried the momentum into the tiebreakers, where he won with white to get a ticket to the semifinals.

In the wild first game of the day, Wei missed a chance to blow open the position around Black‘s king on move 20.

20.Nxf7 is winning. Wei apparently was calculating the complicated lines that justified this sacrifice, as he spent over 5 minutes (these are 15-minute games) before deciding on 20.Kh1

After 20.Nxf7, White cannot capture with 20…Kxg7 due to 21.Rxf6 Bxf6 22.Rxf6, and White is ready to open up the long diagonal for his formidable bishop. Black is lost.

Wei ended up surviving a lost endgame later on. In the first diagrammed position, perhaps the young Chinese was led astray by the pleasant memories of his marvellous attack against Lazaro Bruzon from 2015 — his king was on h1 in that game.

In this match, a draw in the first game was followed by the players trading blows with the black pieces. Game 4, which lasted 112 moves, saw Xiong failing to make the most of his extra pawn in an endgame with queens and minor pieces. The fact that all the pawns were on the same side of the board helped Rapport to defend.

Rapport won the first game of the tiebreaks, and found a nice-looking (winning) move in the following encounter. He had the white pieces.

In a must-win situation, Xiong went all-in, massively damaging his structure and keeping his king in the centre in order to create an imbalanced tactical struggle. It all was going according to plan, until he blundered with 16…Qh5

Rapport, a fantastic tactician, quickly found 17.Ne5+, and Xiong had to make major concessions to prevent a mating attack. The US grandmaster resigned on move 33.

A 21-move draw was followed by Giri showing resilient defensive skills to keep the balance in the second game. Duda did manage to convert his advantage in game 3, which meant the Dutchman needed to win on-demand to take the match to tiebreaks.

Playing white, Duda allowed his opponent to gain a space advantage on the kingside, but in return, he got to create a closed pawn structure, thus diminishing the chances of his opponent creating havoc on the board. This is how the position looked after Black‘s 23…h5

Curiously, this was the last pawn move of the game. Giri began to manoeuvre his pieces, looking for the best way to break through, and apparently forgot about the 50-move rule. Since the games are played online, a draw was automatically set as the result on move 73, after no captures nor pawn pushes had been made for 50 moves.

Giri could have played g5-g4 just to keep the game going. He quipped on Twitter:

50 move rule is like an en passant but for Top GMs.

Endgames played a big role in the match between Aronian and Arjun. The Indian rising star won the first game with white. However, after holding a draw in the following encounter, he saw his experienced opponent getting back-to-back wins to take overall victory.

In game 3, Aronian proved that a single far-advanced passed pawn can be stronger than three connected passers.

There is nothing White can do against the threat of Rd7-d1 — other than giving up his rook for the b-pawn: 41.Re1 Rd1 42.Re2+ Kc3 43.Rxb2 Kxb2. But both players knew that the ensuing technical position was won for Black. Arjun resigned.

This Mother-Daughter Duo Show Us How Cool Parenting Is Done

This Mother-Daughter Duo Show Us How Cool Parenting Is Done

BSP to keep focus on supporting growth despite inflation risks

‘Joshua wanted me to clean up his dirty washing [Usyk]’