Four 2700+ rated, experienced grandmasters were left out of contention at the end of the FTX Road to Miami preliminaries — including Teimour Radjabov, who withdrew from the event on the second day of action. Three young stars, on the other hand, not only made it through but also impressed with their strong performances: Sam Sevian, Arjun Erigaisi and Jeffery Xiong finished first, second and fifth respectively.

Out of the players who did not make the cut, the most shocking case was that of Shakhriyar Mamedyarov. The Azerbaijani star lost all three of his games on Wednesday to finish in tenth place, only a point behind Wei Yi, who reached the quarterfinals despite losing his last-round game. Mamedyarov has mentioned more than once that he generally does not feel very comfortable playing online.

Radoslaw Wojtaszek did have a strong finish, winning his last two games in the prelims, but he fell short nonetheless. The Polish grandmaster thanked the organizers on Twitter.

Always nice to finish on a high note, pity it wasn’t enough to qualify! Many thanks to @chess24com @ChampChessTour for the invitation, it was big fun to be part of this great event 😀

It is hard to talk about favourites in the quarterfinals, as lower-rated players have shown better performances than his higher-rated opponents in the preliminaries. An exciting knockout stage awaits us. 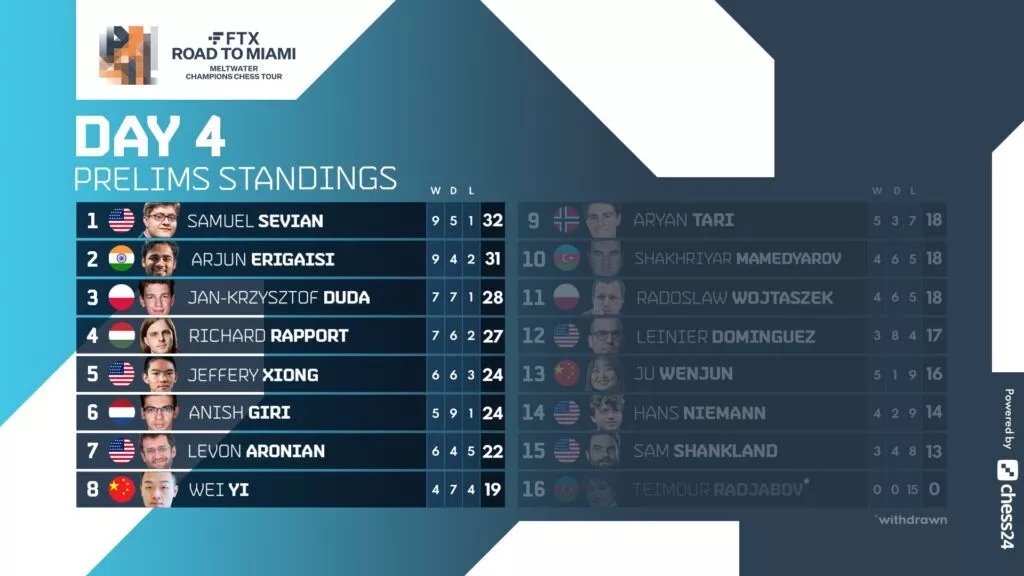 In the penultimate round, Levon Aronian scored a crucial win, as he beat Leinier Dominguez with the black pieces. Following a tough strategic fight, Aronian went for a kingside attack, which engines do not approve but that is difficult to handle for the defender in a rapid game.

Richard Rapport lost twice in the first five rounds, but since then collected six wins and four draws to finish in fourth place. The Hungarian star outplayed Wei Yi in round 15 from what in a materially balanced knight endgame.

Mobile Data, Not Internet Service Providers, To Be Blocked In Bali During Nyepi