FTX Road to Miami: Above the cut-off line

Two players remain undefeated in the FTX Road to Miami online tournament: Sam Sevian, who is the sole leader on 28/36 points, and Jan-Krzysztof Duda, third in the standings on 24/36. Between the two in the tournament table stands Arjun Erigaisi, who has drawn only two games so far in the preliminaries. The Indian rising star finished day 3 with three consecutive wins to secure a spot in the knockout.

In the remaining three rounds of the prelims, it will be all about who makes it to the online event’s quarterfinals. Shakhriyar Mamedyarov (18 points), Anish Giri (17) and Levon Aronian (17) are currently on the top half of the standings, but they will need to contend with the ever-dangerous Wei Yi (15), Hans Niemann (14) and Leinier Dominguez (13), who might surpass them in the standings if they get a couple of wins in the final stretch of the round-robin.

Let us not forget that the football scoring system is in place — 3 points for a win, 1 point for a draw — which means we are likely to see plenty of fighting chess on Wednesday. Moreover, all three players mentioned above who are currently above the cut-off line have already ‘played’ Teimour Radjabov — and thus got 3 ‘free’ points due to the Azerbaijani’s withdrawal — while two of the chasers, Dominguez and Wei, have yet to receive those 3 points. 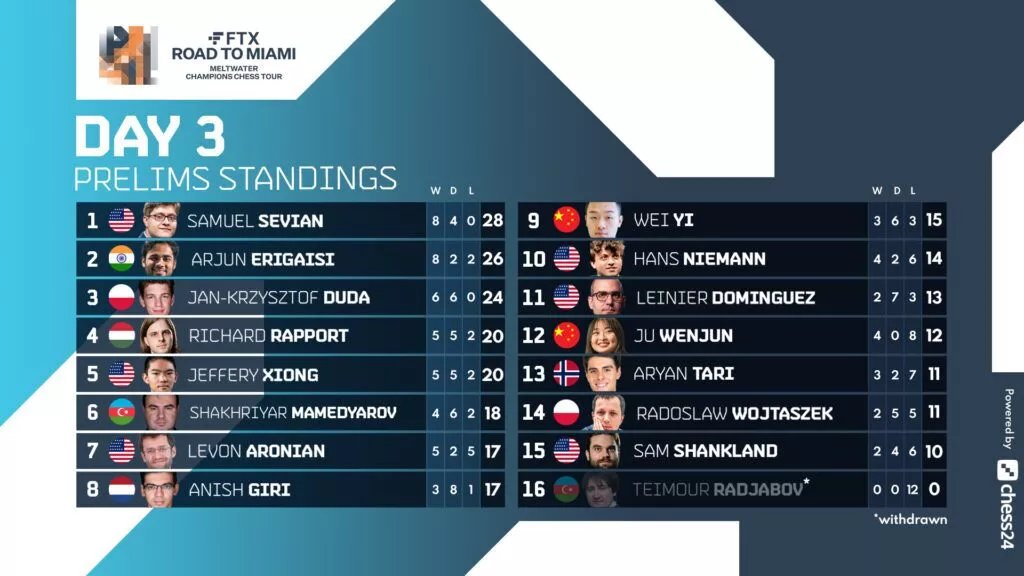 Arjun was the top scorer on Tuesday, and also the player who showcased some of the most exciting chess in rounds 9-12. The 18-year-old in fact kicked off the day with a loss.

Facing Duda with white, he had a clear advantage in the late middlegame. A single error (see move 46) allowed his opponent to equalize the position. In the ensuing materially imbalanced endgame, Arjun failed to defend a tough position with queen against rook and bishop.

Following a haphazard performance on the first day of action, Richard Rapport has recovered and is now in shared fourth place with 20/36 points. In round 12, he showed great technique to take down Hans Niemann in an ending with rooks and dark-squared bishops.

Endgame Riddle Fischer vs Spassky, Game 10: Spassky could have drawn!