Soon after finishing in shared third place at the Candidates Tournament, Teimour Radjabov kicked off his participation at the FTX Road to Miami online event with a draw and three losses. The Azerbaijani surprisingly entered the second day of the competition in last place. After yet another loss, against Anish Giri, he informed the organizers that he had been feeling unwell, which led to his withdrawal from the tournament.

Round 5 also saw sole leader Jeffery Xiong beating an out-of-form Levon Aronian. Xiong was paired up against Radjabov in the next round (thus, he received 3 points by default), and was defeated by Richard Rapport, another Candidate, in round 7. By that point, Sam Sevian had surpassed his compatriot in the standings after winning three games in a row — four in a row if we count his win over Xiong in Sunday’s round 4.

Sevian got 3 extra points in the final round of the day, when he was supposed to face Radjabov with the black pieces. The 21-year-old has a 3-point lead over Arjun Erigaisi, who got three wins and a draw on day 2.

While it is true that prizes are distributed according to the number of wins and draws in the prelims, the main goal for the ever-competitive grandmasters is to reach the knockout. Currently, three players are sharing 7th-9th place with 12/24 points, which means two of them would have moved on to the next stage if the tournament had ended after eight rounds.

Among them is Ju Wenjun, the lowest-rated player and the only woman in the field. The Chinese defeated Rapport, Sam Shankland and Wei Yi on Monday! 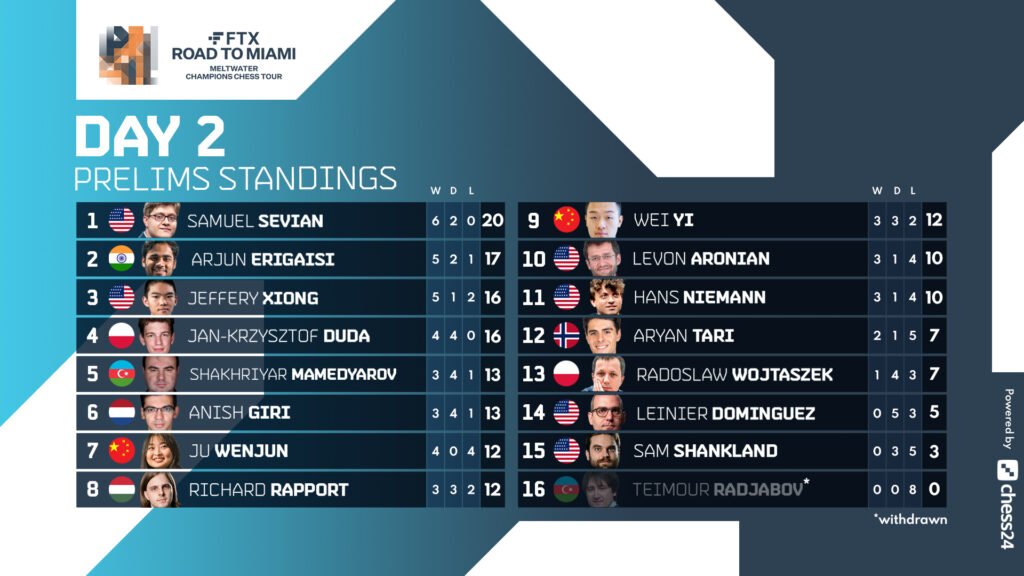 Sevian’s victory over Hans Niemann in round 6 was certainly remarkable. From the black side of an Italian Opening, Sevian greatly manoeuvred his pair of knights on the queenside before breaking through with an attack on the other flank of the board.

Another US representative — 6 out of the 16 participants play under the US flag — grabbed two wins and two draws on the second day of action. Levon Aronian currently stands on the bottom half of the table, but he did manage to end the day on a high note, as he made the most of his advantage in an endgame with rook and knight against rook and bishop in round 8.

Subriel Matias gets his revenge in stopping Petros Ananyan in nine

American Cup, Day 6: Caruana and Krush qualify to the finals