The Magistral de León is a traditional event, which will see its 35th edition taking place at the City Auditorium of the Northwestern Spanish city of León. Besides a number of activities for fans and amateur players, including the presence of Rey Enigma, the main event of the festival is the 4-player knockout tournament with Vishy Anand, Boris Gelfand, Andrey Esipenko and Jaime Santos.

Anand will be looking to get his tenth title in León, while Gelfand will try to defend the title he won last year, when he defeated Leinier Dominguez in an exciting final match. While Gelfand triumphed in 2021 eleven years after his first tournament victory in León, Anand will try to get his tenth title six years after his previous victory from 2016, when he beat David Antón and Wei Yi in the knockout.

Two semifinal matches will take place on Friday and Saturday. The pairings were decided on Thursday, during the opening ceremony. Anand will face Santos on Friday, while Gelfand will play Esipenko on Saturday. The action kicks off at 16.30 CEST.

Esipenko gave a simul at the León University on Thursday.

Press release by the organizers 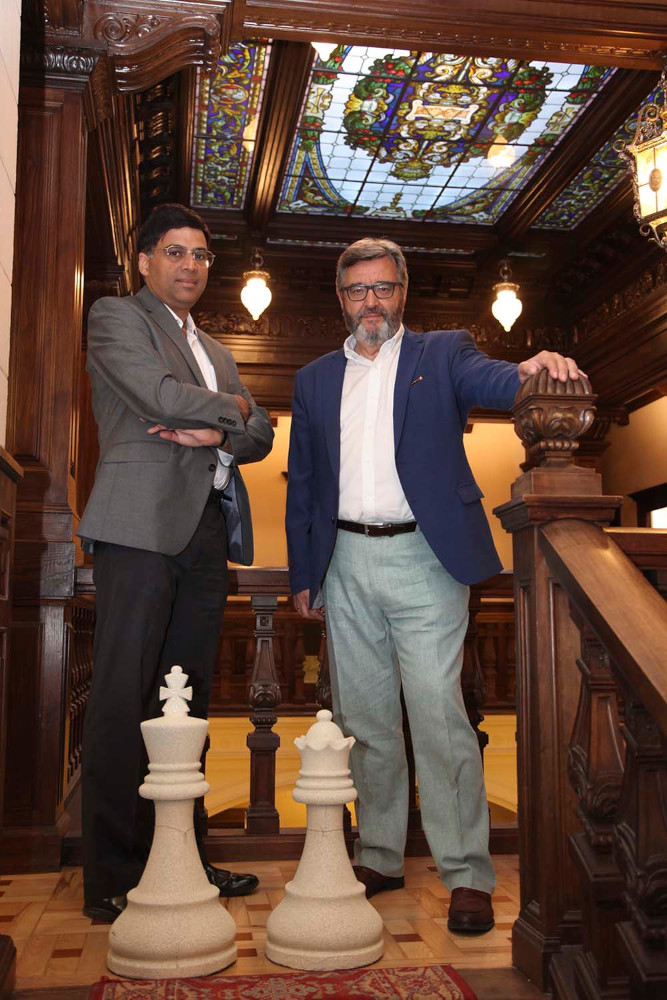 The legendary Vishy Anand strolls the streets of León today with the calmness that comes from experience but with a clear intention of leaving the city next week with a historic victory: the one that would make him 10 times champion of this tournament, the oldest in Spain.

Five times world champion and nine times winner of the Magistral, the legendary Anand is one of the greatest chess stars of all time.

To speak of him is to speak of probably the greatest natural talent in the history of chess. A player who at the peak of his career still coincided with two great chess legends of the 20th century, Kasparov and Karpov, whom he defeated on numerous occasions.

With a very long career and having been crowned the best player in the world five times, a feat reserved for a privileged few, Vishy is still playing at the highest level at the age of 52 and remains among the top ten in the world.

In León, Anand already feels at home. That is why this morning he enjoyed a short walk and visited the Museum of Leonese Emigration, housed in a stately Spanish-style mansion that has fascinated the five-time champion. There he received the painting that the artist Luis Zotes, painter, caricaturist and excellent chess player, had painted with the four participants of the knockout depicted as musketeers.

If there is one thing that characterizes Anand, it is his speed. Speed in the game and in the calculation of variations are his hallmarks. With a privileged strategic and tactical instinct, Anand will be at his best on Friday, in his clash with GM Jaime Santos, in the first semifinal of the tournament.

Anand recognizes that Santos is a difficult opponent, who continues to progress in his game and has already put him in difficulties. Santos, for his part, recognizes that Anand is the undisputed favourite, but already sees himself with more possibilities against him. “I see myself capable of reaching the final”, he assures.

What to Expect at Ortigas Art Festival 2022

DeMar DeRozan On Clutch Moments: ‘You’ve Got to Take It on.’