Sunday’s eighth round at the Palace of Santoña had stopped the inertia of three rounds that made it all but impossible to imagine a scenario in which either Ian Nepomniachtchi or Fabiano Caruana would not win the Candidates Tournament. Hikaru Nakamura beat Caruana with white to shake things up a bit.

On Monday, however, the prognosis of a two-horse race down the line became the norm again. Nakamura was defeated by Teimour Radjabov, who came from losing in round 7 and drawing a marathon game in round 8. Thus, Nakamura did not gather momentum after his remarkable win, and is now two points behind the leader with five rounds to go.

Radjabov grabbed Black’s a-pawn on move 16, and Nakamura never quite managed to prove he had compensation for the material. The queens were swapped on move 26, and White firmly consolidated his advantage soon after.

Black has temporarily restored material balance. However, defending the b6-pawn with 27…Rf6 would only make things worse for him. Nakamura correctly decided to play 27…c5, but after 28.Nc6 cxb4 29.cxb4 it was clear that White’s passer on the queenside would be all but impossible to stop.

Radjabov was ruthless in the technical phase that followed, as he swiftly converted his advantage into his first win of the event. 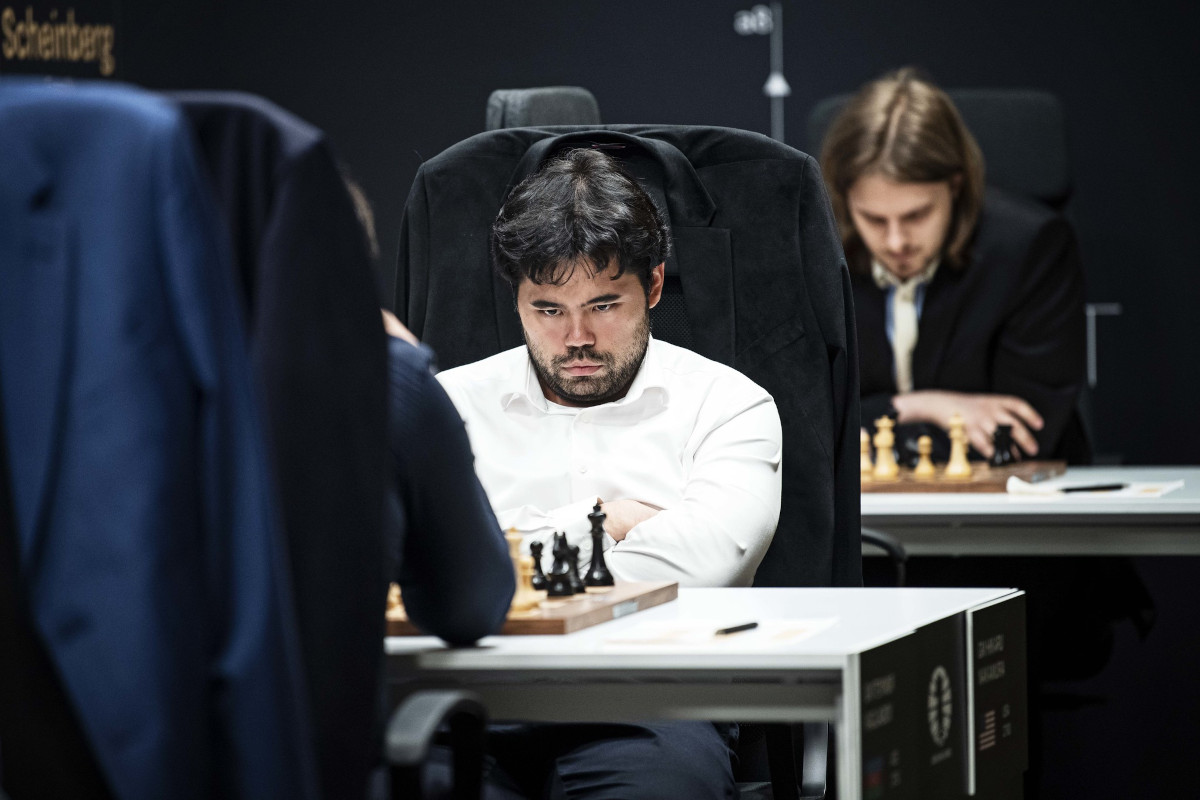 Both Hikaru Nakamura and Richard Rapport won on Sunday and lost in the following round | Photo: FIDE / Stev Bonhage

A key factor in Ian Nepomniachtchi’s success in Madrid has been his excellent opening preparation. Having prepared to face Magnus Carlsen in a match last year is certainly a plus. However, the one player who knows exactly how that feels is Fabiano Caruana, who faced the world champion back in 2018 — and, in fact, drew all twelve classical games in London.

Unlike Nepo, though, following the match Caruana had to wait sixteen months before playing the next Candidates, and then saw the event being suspended for a whole year.

A similarity between the former challengers, on the other hand, was that both became major experts in the Petroff Defence. Chess pundits anticipated a fight in this very opening, and saw Caruana springing the surprise that the tournament situation called for.

In his two preview games in Madrid, Nepo barely had to work over the board, with Richard Rapport inexplicably rejecting a draw and Ding Liren agreeing to sign a rather quick draw against the tournament leader.

But Caruana’s move got the Russian thinking, as he spent almost an hour (combined) before move 17, when the board was still full of pieces and White’s position began to look more and more promising. GM Peter Heine Nielsen thus described what Caruana had achieved:

Caruana is fighting the Skolkovo super-computer in exactly the right way! Playing a move not among the top lines, which would have been prepared and analysed to perfection. Instead he forces the battle to be where he has the edge, human vs human, over the board.

Unfortunately for the American, though, Nepo had more than enough energy to carefully consider how to defend the position. Caruana’s advantage fizzled out as the time control approached, and a draw was signed exactly after Black’s 40th move. 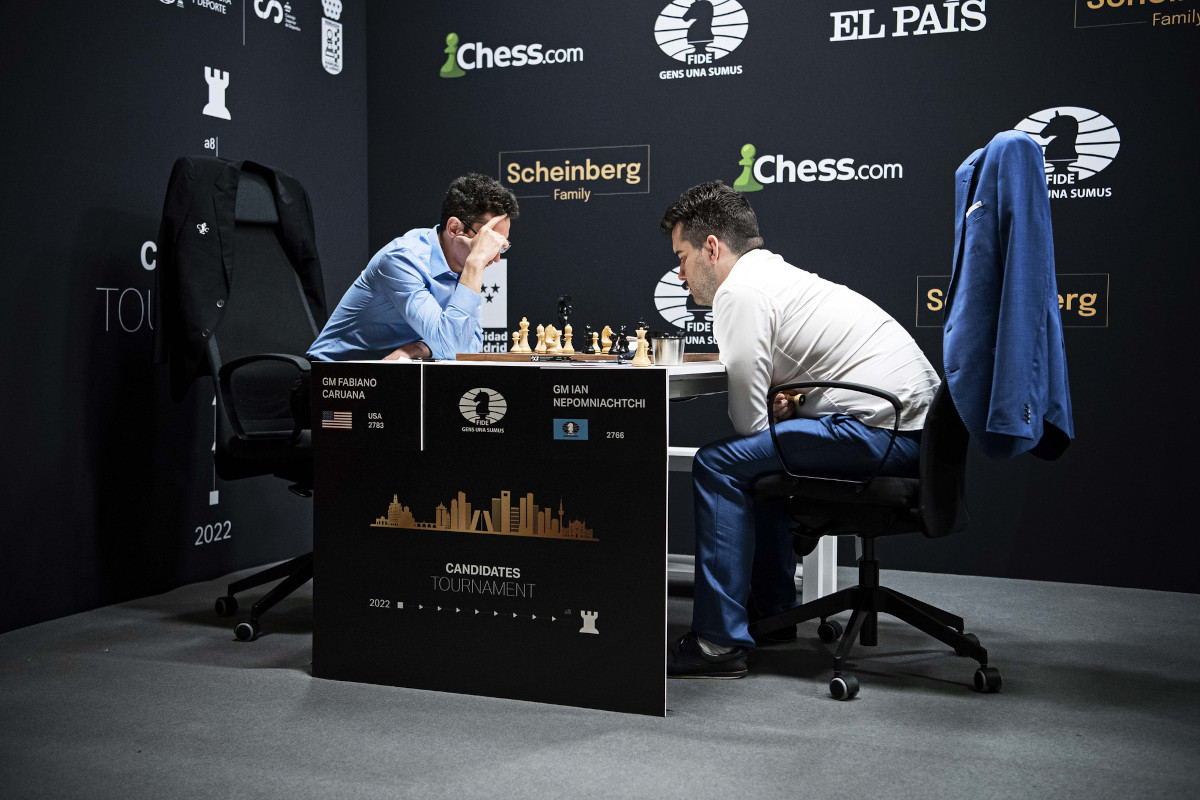 The two frontrunners in the fight to win the 2022 Candidates Tournament — Fabiano Caruana and Ian Nepomnaichtchi | Photo: FIDE / Stev Bonhage

A first win for the top seed

Three of the four players who were yet to win a game in Madrid scored full points in round 9. One of them was top seed Ding Liren, who had missed some chances to bounce back from his loss against Nepomniachtchi in the first round.

Ding’s rival on Monday was Jan-Krzysztof Duda, who was playing with black for a second day in a row and came from suffering a painful defeat against Rapport. The Polish star failed to find a rather sophisticated defensive recourse on move 40.

White is threatening to place his rook on c7, attacking f7 for a second time — his a-pawn is also a major trump in the position. The one move that gives Black hope going forward is the difficult-to-find 40…Bh5, preparing to respond to 41.Rc7 with 41…g5, and the fight continues.

Duda went for 40…Bxe4 instead, and soon found himself unable to create counterchances as Ding’s queenside passer marched down the board.

The man from Wieliczka went through the motions until move 61, when he decided to throw in the towel. Luckily for the Polish, Tuesday is a rest day. He will have time to regroup and prepare for a potential good final run in Madrid. 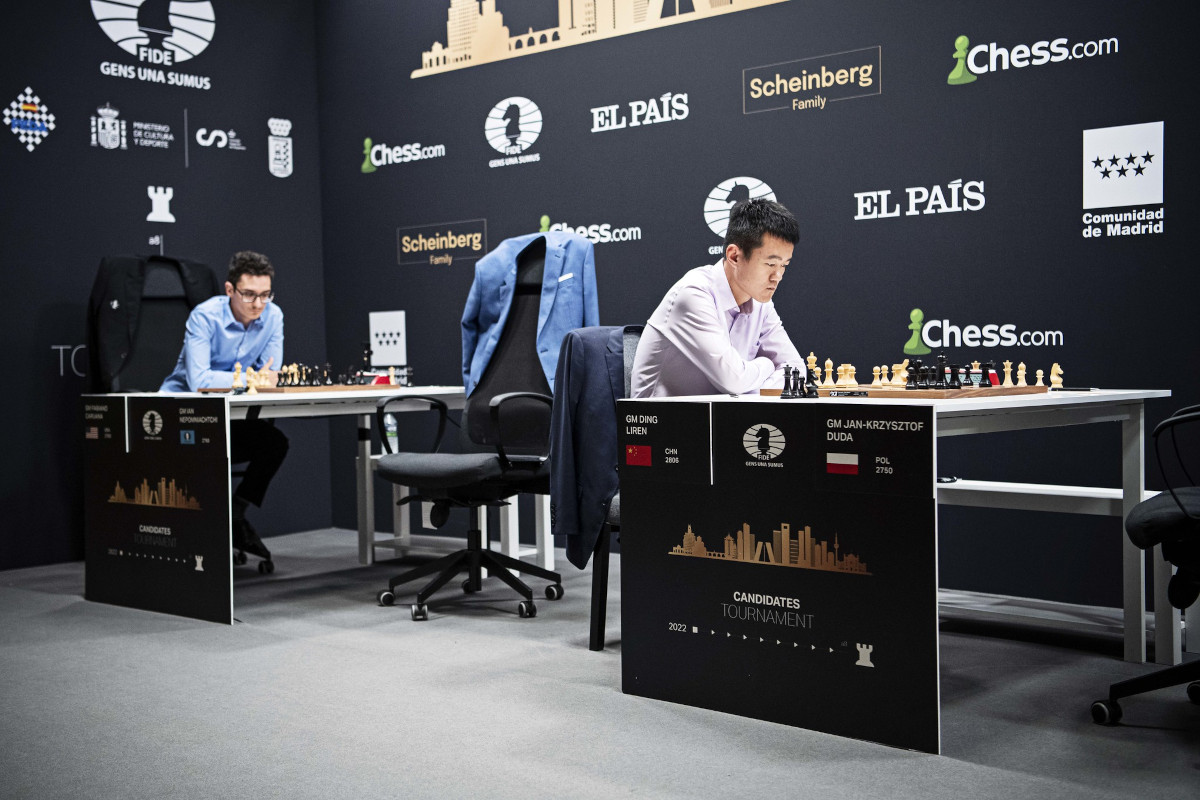 Not surprisingly, Alireza Firouzja and Richard Rapport played the sharpest game of the day. The Iranian-born star played an early f2-f4 and gave up two pawns as he made sure his opponent would not get to safeguard his monarch on the kingside.

Engines give Black a small edge in this position, as he is two pawns to the good after all. However, White is well-positioned to create threats against Black’s king, and that factor is much more relevant in a game between humans — especially when a tactician as strong as Firouzja is the one marshalling the white pieces.

Rapport faltered soon after, and the youngest player in the field eventually managed to score his first-ever victory in a Candidates Tournament.

8 Worst Filipino Habits, According to Netizens

8 Worst Filipino Habits, According to Netizens

How to Bet on the Super Bowl in Hawaii