Fans of statistical analysis who also follow chess events have the privilege of getting free updates with relevant probabilities almost daily during important tournaments. The  data is crunched by Tai Pruce-Zimmerman, who maintains the site Chess by the Numbers since 2015.

Before the start of round 7, the probability of a player other than Ian Nepomniachtchi or Fabiano Caruana to win the title in Madrid would have been 31.3% — had both frontrunners lost their games on Saturday! Now that both grabbed full points for a second day in a row, it is nearly impossible for one of them not to win the event.

It’s not yet guaranteed that Nepo or Fabi will ultimately win the Candidates. There’s still a 2% chance it will be someone else!

So far, the only player other than Nepo or Caruana to obtain a victory in Madrid is Hikaru Nakamura — the streamer stands in sole third place as the only player with a fifty-percent score. Importantly, Naka will face Caruana with the white pieces in Sunday’s eighth round.

Richard Rapport is having an eventful performance in Madrid. However, despite having played many interesting encounters, he had collected only draws until round 6. Somewhat ironically, his first decisive game saw him rejecting what would have been the easiest draw of the tournament for him.

Facing Nepomniachtchi’s Petroff Defence on Saturday, the Hungarian could have secured a quick draw had he chosen to repeat moves in a completely imbalanced position.

Not surprisingly, this is a theoretical position. The contenders had all but blitzed out his moves up to this point, and Nepo’s 14…Bh3 was also played almost immediately.

The idea is that after 15.gxh3 Qg6+ 16.Kh1 Qe4+, White needs to decide whether to continue repeating to end the game and split the point, or to play 17.f3 against an opponent who is obviously prepared to face this line — and who, by the way, has been showing great results against a tough field!

Engines do not give this move as losing, but the move does put the burden on White to prove how to activate his undeveloped army effectively. Perhaps under different circumstances, this might have been a reasonable decision. However, choosing to keep the game going after spending almost 50 minutes trying to figure out whether to continue or not was definitely a practical mistake by Rapport.

Nepo blitzed out his next four moves, and not once spent more than 8 minutes on a single move until the end of the game. Rapport was down on the clock and had to deal with tough decisions one after another, all while facing the player who has been showing the best chess throughout the event.

The Hungarian saw it necessary to give up his queen. Nepo, in turn, was ruthless in the conversion of his advantage.

31…h4 is the strongest move in the position, and one that Nepo played after thinking for merely 72 seconds. For a fourth time in the tournament (after seven rounds!), the Russian obtained a full point by making the most of a direct attack on the kingside — a feat few could have predicted in an event with such a strong field.

GM Karsten Müller analysed the game, highlighting how little chances White had to defend. Rejecting the draw by repetition turned out to be the decisive mistake in the game. 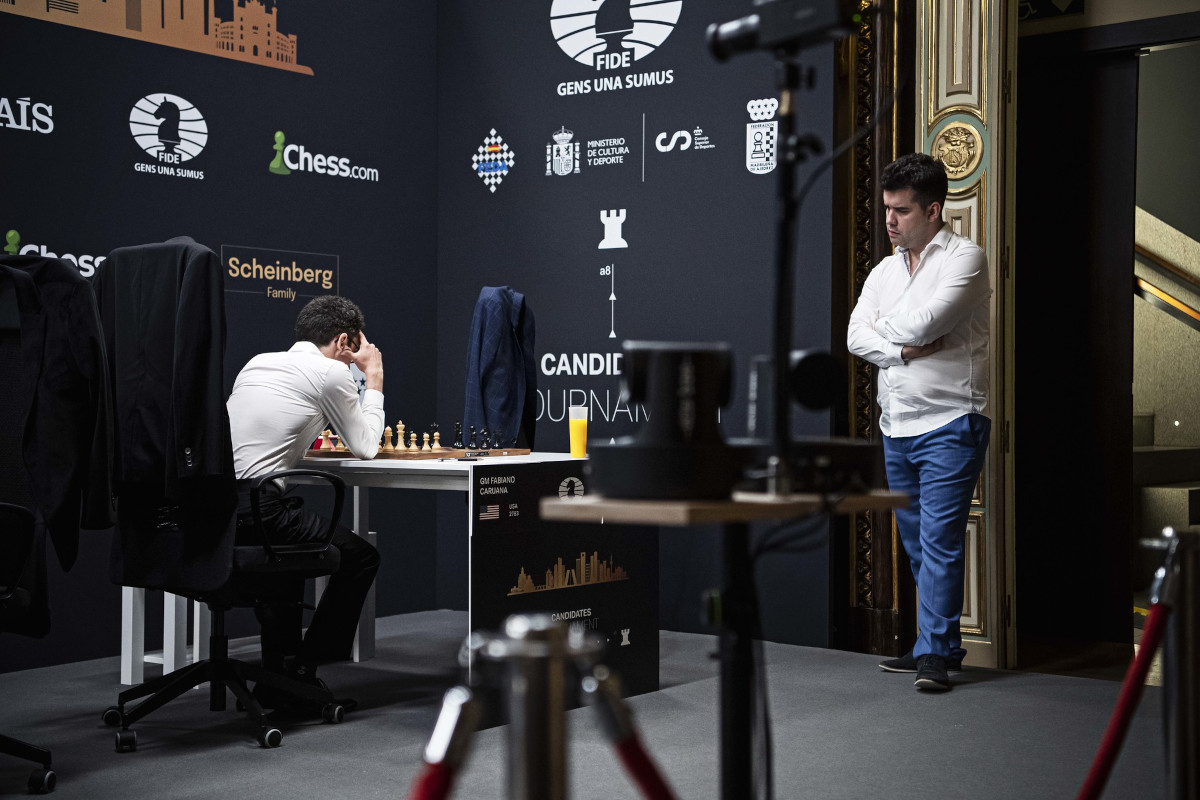 While Rapport and Nepomniachtchi blitzed out their initial moves, Teimour Radjabov had Caruana thinking over the board as early as on move 3 — 1.e4 c5 2.Nf3 a6

This move, which gives name to the Najdorf Defence if played further down the line, is almost never seen in top events, and Caruana was clearly not ready to face it in the Candidates Tournament.

After missing a clear chance to win in the previous round, Radjabov decided to prepare a strange sideline on the rest day. The plan backfired, as the ever-principled Caruana kept finding the most critical continuations in the ensuing position.

The one who deviated from theory first was the Azerbaijani, as he boldly chose to castle queenside after losing all the time advantage he had amassed in the opening on a single move.

Radjabov spent 26 minutes before playing the questionable 13…0-0-0, when castling kingside was perfectly sound in the position. Much like Rapport’s f2-f3, this move is not losing, but it does leave Black needing to demonstrate why he made such a decision.

The Azerbaijani was perhaps expecting to get a double-edged position after springing an early surprise, or maybe he was simply in a fighting mood. Unfortunately for him, though, Caruana has shown confident play throughout the event, and this was not the exception.

Later on, Caruana had an extra pawn in a queenless position with bishop against knight and four rooks still on the board. He also had managed to activate his king.

After 37.Kg6 Nxc3, a pawn race on opposite flanks eventually emerged, as Black soon captured White’s a-pawn while his opponent grabbed its counterparts on g7 and f6.

In the end, Black got to queen his pawn first, but White was the one who had the better coordinated pieces.

There followed 46…b1Q 47.f8Q Qg6+ 48.Qf6 Qe8+ 49.Kd6, and Black ran out of checks. With the strong light-squared bishop pointing at the queenside from f3, there was little Black could do to defend his monarch. Resignation came seven moves later.

Radjabov is now sharing last place with Alireza Firouzja, whom he will face with the black pieces in round 8. 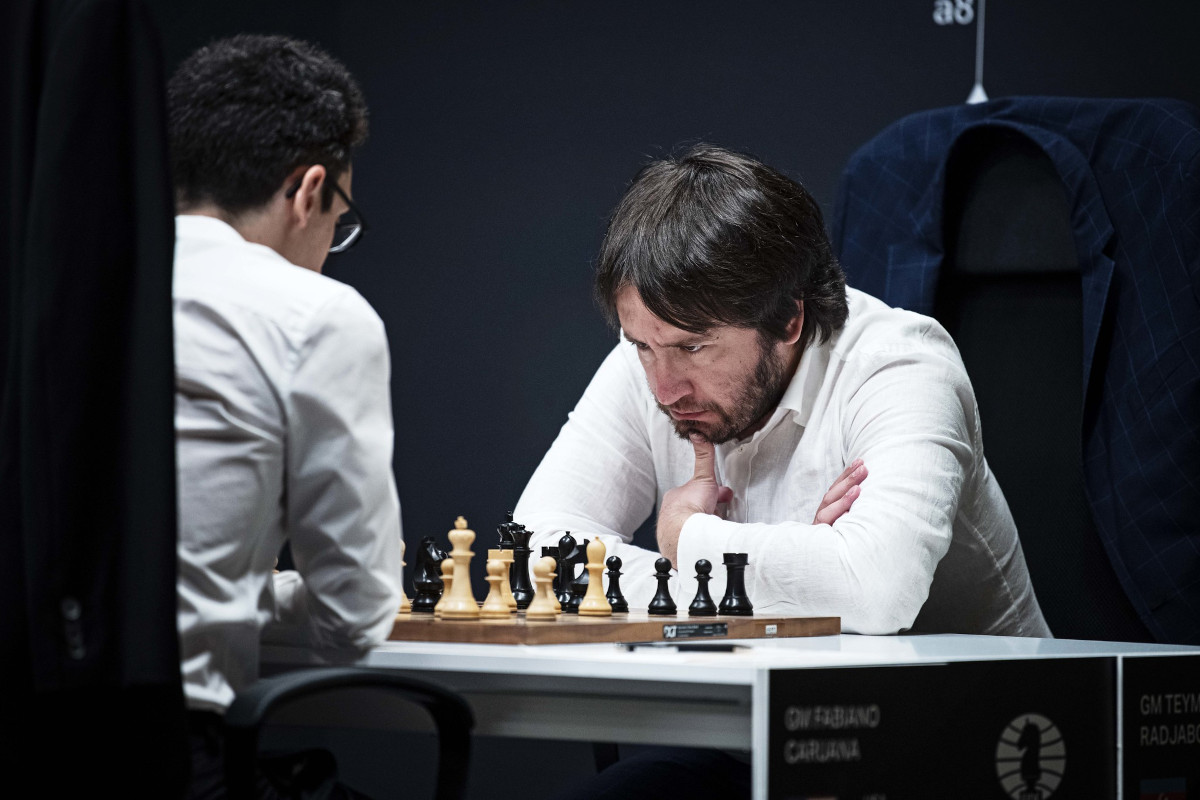 Understanding before Moving 85: Basics of the Benko Gambit (4)

Understanding before Moving 85: Basics of the Benko Gambit (4)

Leo Santa Cruz wants Mark Magsayo next in unification at 126