“From Ukraine With Love For Chess”

The project was started after Russia’s invasion of Ukraine on 24th February and the desire, even in such a desperate situation, to do something for good. New In Chess contacted Ruslan Ponomariov who acted as general editor, asking friends and colleagues for articles and game annotations. It was decided that all proceeds from the book will go to Ukrainian charities. Vasyl Ivanchuk, Anna and Mariya Muzychuk, Anton Korobov, Vladimir Tukmakov, Pavel Eljanov, Andrei Volokitin and Ponomariov himself, and many, many others have annotated games and written articles. 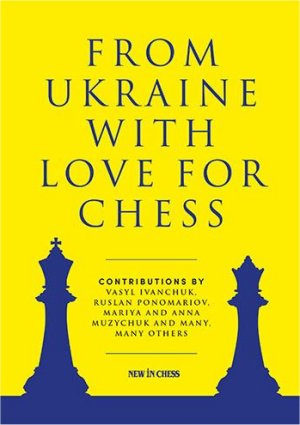 There is an abundance of great content in the book. One of my favourite chapters is by Oleg Romanishin who discusses his secret training matches against Tal. There is also an excellent chapter by Jan Timman on Ukrainian study composers. Apart from individual successes of Ukrainian players, there are reminders of the strength of the Ukrainian team with articles on the famous Olympiad victories in 2004 and 2010, and 2006 for the women’s team.

In buying this book you are making a gesture of solidarity with the Ukrainian chess community as well as contributing to worthy charities.

Robert Ris’ Fast and Furious: An attacking masterpiece in the King’s Indian

Robert Ris’ Fast and Furious: An attacking masterpiece in the King's Indian