The most important tournament of the year, the one that will reveal the name of the next Challenger, will be held in Madrid from 17 June to 5 July. Let’s take a look at the completed list of the players and evaluate their chances.

I say the completed list of players, because there was still a theoretical chance for the Ethics and Disciplinary Commission to overturn its decision to ban Sergey Karjakin for six months for his war-mongering social media activity. As expected, it didn’t, so Ding Liren took his place as the highest-rated player on the rating list.

We will see whether Karjakin will up the ante and go to CAS (The Court of Arbitration for Sport) to seek a reversal, but even if he does it will be too late for the Candidates. On the other hand, if he does, it will be an unprecedented event in the chess world and a curious situation to see FIDE defending its Commission’s decision.

Leaving politics aside, let’s turn our attention to the players.

The comeback of Ding Liren

Ding Liren was inactive for the vast majority of the pandemic. When the chance caused by the Karjakin situation appeared, he was required to play 28 rated games by the end of April in order to be eligible to qualify for the Candidates on the basis of rating.

The Chinese federation took swift action and organised three events for their best player. The first was a quadruple round-robin in Hangzhou with GMs Bai Jinshi (2593), Li Di (2579) and Xu Xiangyu (2564). The final score was: Ding Liren 10.5 out of 12, the rest of the players all on 4.5, having drawn all the games among themselves. Ding Liren beat all his opponents with the score 3.5-0.5 and won 11 rating points in this event.

The second event was a six-game match, again in Hangzhou, with the 22-year-old Wei Yi. After five draws Ding Liren won the last game and with it the match with the score 3.5-2.5.

The third event was still in Hangzhou, a nine-round team event where Ding Liren won three games and drew the rest. His total rating gain from these three events was seven points, enough for a rating of 2806 and a world number two spot.

The Chinese federation supported its player with the organisation and the player did what he had to do to have another shot at the highest title. While there is no doubt in this author’s mind that Ding Liren deserves to be in the Candidates, some doubts do linger about the execution of the necessary steps.

Here’s a fine example of Ding Liren’s persistence. [You can click on moves in the following notation to get a replay board. Click on the fan icon for analysis assistance of a chess engine].

Ding Liren’s games didn’t show anything new with regard to his openings, which likely means that he kept all his preparation for Madrid.

His experience from Yekaterinburg was painful, but he did win the second leg of that unfortunate tournament. This time the event should be played under normal conditions, where Ding can hope to show his best and give China its first Challenger.

At 29, Ding Liren is at the height of his powers and unless the lack of practice during the pandemic threw him off balance, he is a serious candidate to win. 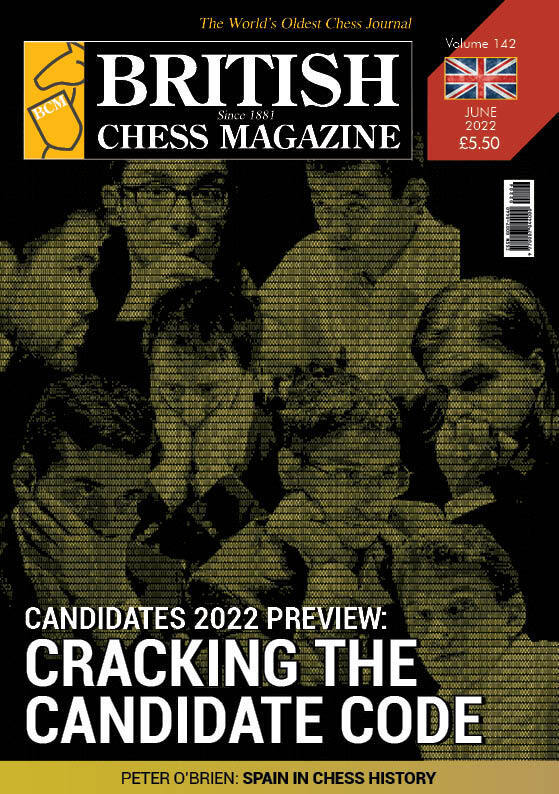 The above series appears in the June 2022 issue of The British Chess Magazine, the world’s oldest chess publication. It is reproduced with kind permission.

Published monthly, each issue of The British Chess Magazine contains 64 pages packed with exclusive articles and annotations. You can buy a subscription (£55 per year, £4.58 per issue) or download a sample copy free.

Elon Musk Buys Twitter — What Does It Mean for the Platform’s Users?