The wait is over, as the most anticipated event of the year kicked off at 15:00 local time in Madrid. The spectacular Palace of Santoña received the eight players that will be fighting to become Magnus Carlsen’s next challenger in a match for the World Championship. A 14-round tournament, this is more a marathon than a sprint, with the final round set to be played two and a half weeks from now, on July 4.

In terms of entertainment, it was a fantastic first round. About three hours in, it seemed likely that all four games were going to have a decisive result. Super-GM and commentator extraordinaire Anish Giri jokingly described the proceedings on Twitter:

At the end of the day, the winners of the tournament’s two previous editions emerged victorious. Ian Nepomniachtchi beat rating favourite Ding Liren with the black pieces, while Fabiano Caruana got the better of compatriot Hikaru Nakamura.

Coincidentally, Caruana and Nepo will face each other in Saturday’s second round, with the Russian getting the white pieces in their first confrontation of the event.

Replay all the games with computer analysis on Live.Chessbase.com 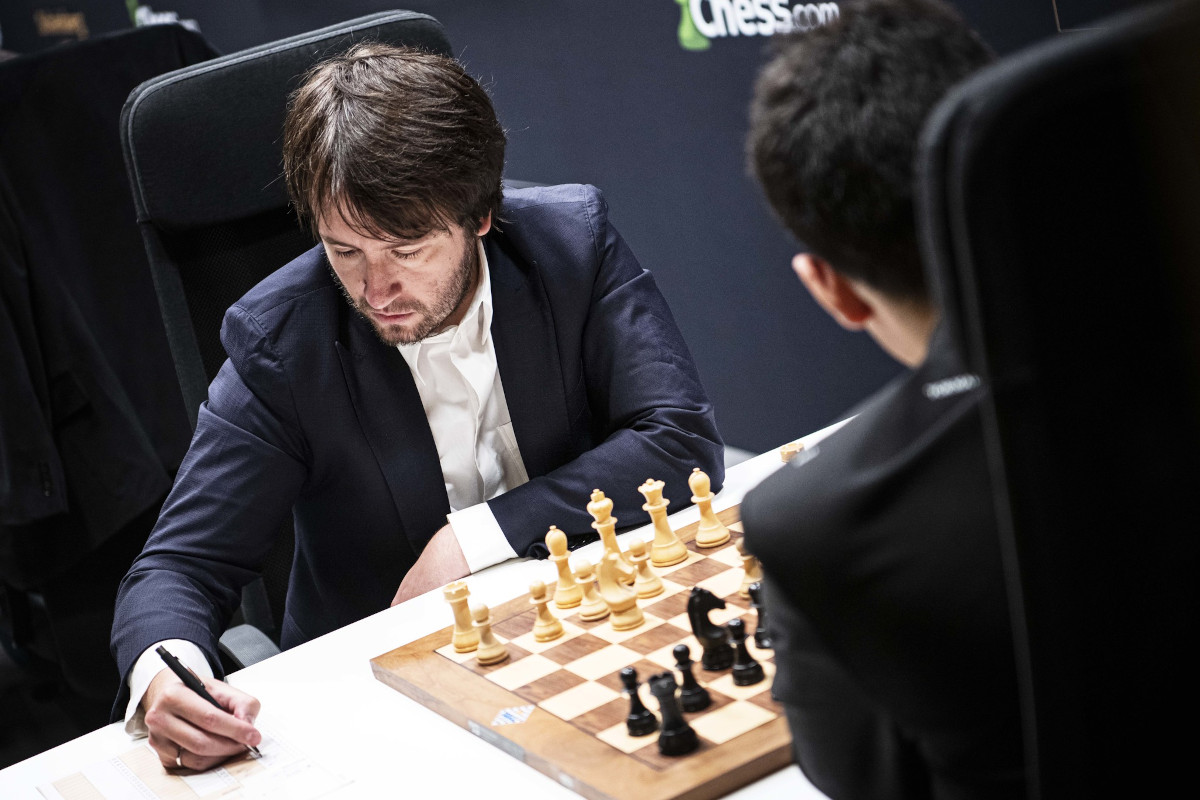 Teimour Radjabov got a better position with white, but could not defeat Alireza Firouzja | Photo: FIDE / Stev Bonhage

Two years ago, Ding and Nepo finished the first round of the Candidates Tournament with the same results as today. While the Chinese surprisingly lost with white against Wang Hao, the Russian defeated Giri with the black pieces. This time around, two of the favourites to win the tournament were paired up against each other in the first round, and their direct encounter left them with the same standing as in 2020 going into the second day of action.

Ding repeated a line he had used against Hans Niemann at the Charity Cup earlier this year. The Chinese lost that game, but nonetheless saw Nepo deviating first from the line employed by the US grandmaster back in March.

Niemann had gone for an immediate c5-break, while Nepo opted for 13…Ng4, which prompted Ding to spend more than 11 minutes on 14.Bb2.

In the strategic battle that followed, Black was quicker in coordinating his army, eventually placing his knight on the strong d5-outpost while keeping active chances to create havoc on the light squares surrounding the white king.

Already in trouble and struggling to find a plan, Ding only made things worse for himself here with 24.Na5. Nepo correctly ignored his b7-pawn and focused on attacking White’s weakened kingside (24…Rf6 and 25…g5 were his next moves).

It did not take long before Ding’s defences crumbled under the pressure.

White cannot grab the annoying pawn with 30.Kxg2 due to 30…Rxf2+ 31.Kxf2 Qh2+, with mate coming quickly. Thus, Ding tried 30.f4, but soon had to resign, as the black queen swiftly infiltrated along the h-file. 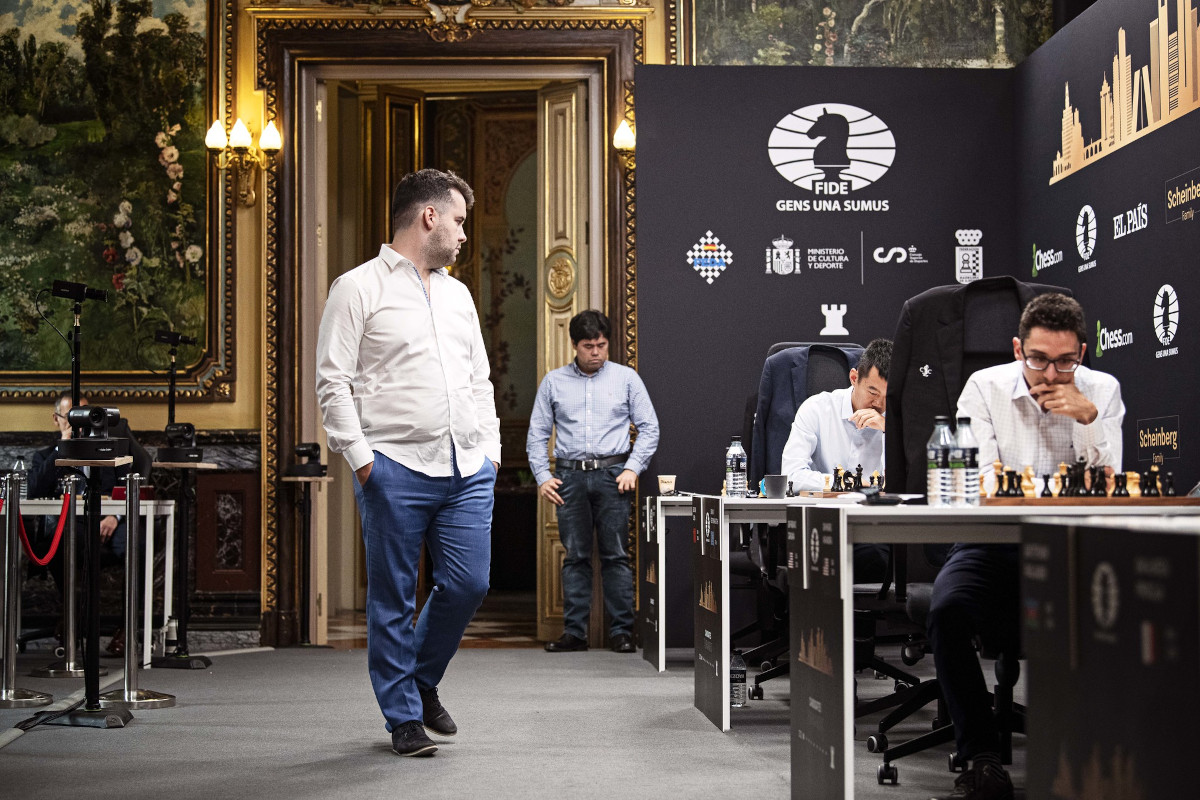 Ian Nepomniachtchi taking a look at his position from a different perspective| Photo: FIDE / Stev Bonhage

As usual, compatriots were paired up against each other in the first round of the event. This year, this only applies to the United States representatives, with Caruana getting the white pieces against Nakamura on opening day. Two fan favourites, one of them might get to celebrate tournament victory on July 4, their country’s Independence Day.

The winner of the 2018 edition was the one finishing the game with a full point to his name. Out of an anti-Berlin with 4.d3, a tense strategic fight ensued. Naka did not take long to equalize the position, but made a questionable decision on move 21.

Explaining his thought process after the game, Caruana told the commentators that he had played 21.b3 to at least prompt his opponent to wonder whether transferring his king to the queenside via d7 was the best way forward (due to a potential Nc4, when …Bxc4 would open the b-file).

Nakamura, who had pushed his g and h-pawns down the board, nonetheless responded by 21…0-0, which turned out to be a fateful decision. With the queens still on the board, the black king is vulnerable to potential attacks.

Moreover, three moves later, the famous streamer opened up the position with 24…d5, further inviting his opponent to find a way to create problems for the black king. By move 31, Caruana had placed his queen on h6, and it seemed like a win was well within reach if he managed to avoid any technical mistakes.

Beating Nakamura is never a trivial task, but Caruana patiently improved his position until getting a well-deserved full point on move 50. 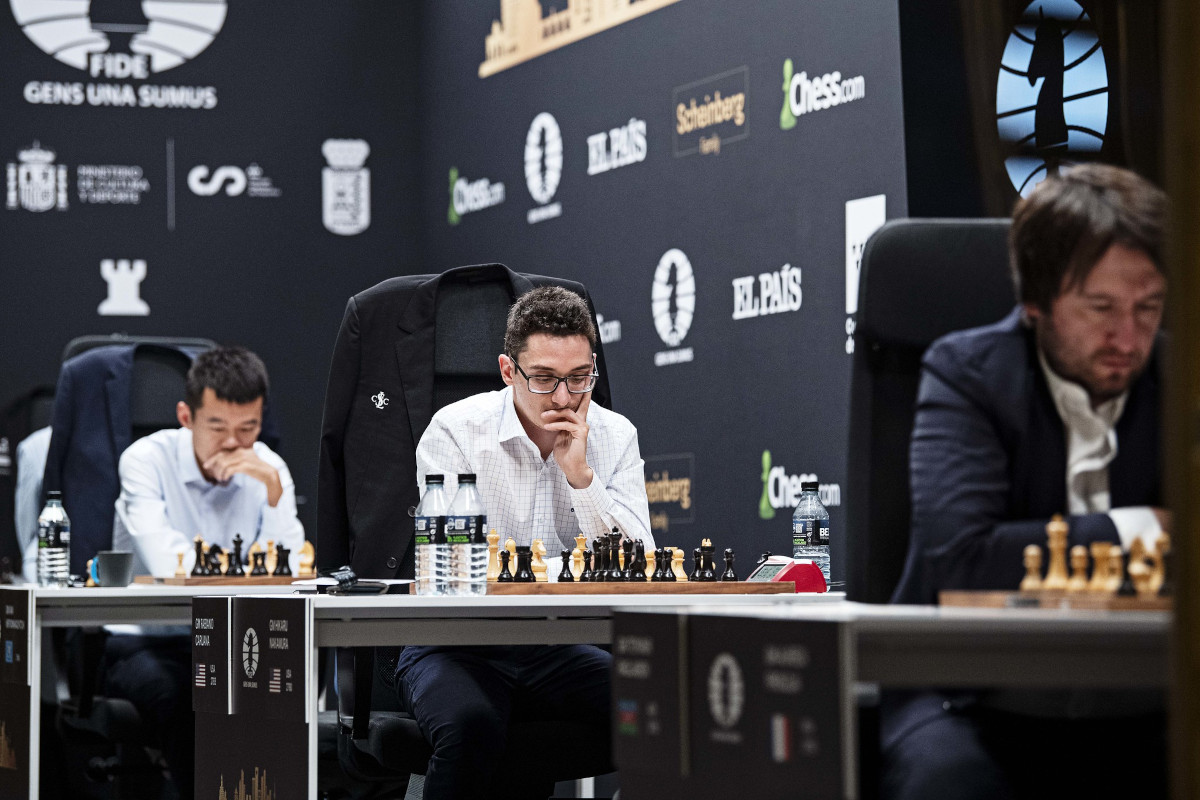